It's been a long wait, but the Limited Collectors Edition of Terminator 2: Judgment Day is finally on the way.

Lionsgate will release the Terminator 2: Judgment Day Limited Collectors Edition EndoArm Box Set on July 17, which includes the film on 4K Ultra HD Blu-ray.  The studio will also reissue the 4K UHD on the same date. Our previous coverage is available here. 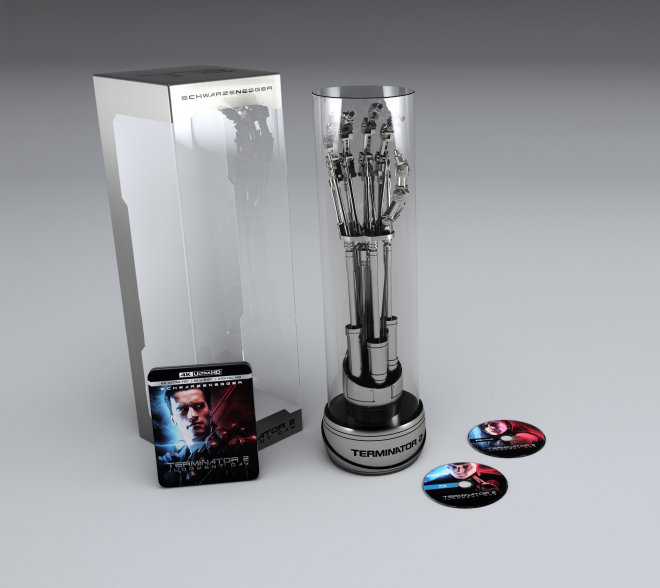 Terminator 2: Judgment Day shattered the definition of action-filmmaking to become one of the most celebrated sequels of all time. Even in an age of anything-is-possible digital blockbuster filmmaking – with onscreen action often entirely fabricated and “unreal” – T2 remains a touchstone for both filmmakers and movie fans on the use of visual effects, fusing high-tech thrills with an emotional and compelling story.

Still lauded by critics today as one of the greatest action films of all time, only 6,000 of the Limited Collector’s Edition EndoArm box sets will be released in the U.S., allowing fans to own a life-sized replica of the T-800 EndoArm mounted on a uniquely numbered stand with James Cameron’s signature. Say “hasta la vista, baby” to SD and relive each quintessential moment in four times the resolution with Full HD and High Dynamic Range on the film’s 4K scan.

·         2 Feature Commentaries including 23 members of the cast and crew, including director James Cameron and co-author William Wisher

·         Seamless Branching to View 3 Different Versions of the Movie

You can find the latest specs for Terminator 2: Judgment Day Limited Collectors Edition linked from our 4K Blu-ray Release Schedule, where it is indexed under July 17.