LG has announced the launch of its new OLED TV Cinema House Powered by Dolby. The traveling home theater installation is designed to show off the company's flagship OLED display using the latest video and audio technologies from Dolby.

And to help celebrate the launch, LG invited us to come check out the experience for ourselves in NYC, along with a short preview clip of Stranger Things: Season Two, and a panel discussion about the evolving home entertainment market held at the Paley Center for Media.

Going Behind the Screen: Bringing the Magic of Hollywood into the Home

Throughout the discussion and Q&A session, the participants covered a wide range of topics related to evolving viewing habits and technologies. When it comes to TV watchers themselves, the panel elaborated on how modern audiences are now becoming more engaged than ever before with the content they watch, citing some amusing statistics about viewers skipping social events or even cutting vacations short just to catch their favorite shows.

Likewise, the participants described a new trend toward "cord-shaving" rather than complete "cord-cutting," as more and more users are reducing their pay-TV packages without all-together cancelling them while then receiving additional content through various internet services. 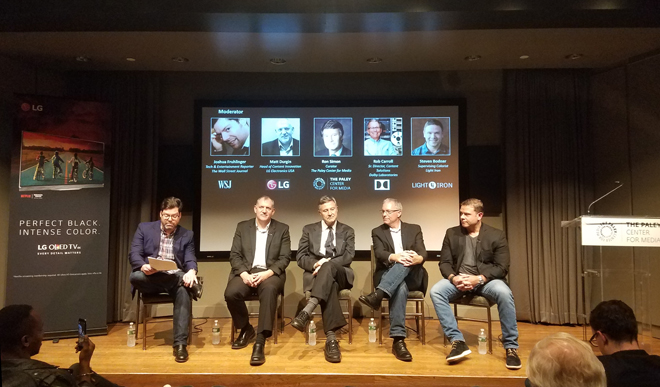 And beyond the viewer side of things, the panel also offered some insights into the color grading process for Dolby Vision HDR , elaborating on the added technical and creative benefits of the wider gamut of colors and contrast that come with the format. To this point, Rob Caroll addressed a common misconception that HDR is supposed to create a radically brighter picture all the time. Instead, he stressed that Dolby Vision is more about enabling a greater range with more intensity meant for only the brightest highlights and darkest shadows of an image. As a whole, the average scene brightness of HDR content should actually be more or less on par with the average scene brightness of SDR content -- it's just that HDR allows for the brightness to kick up considerably when something specific on screen -- like a flame -- calls for it.

Speaking of which, Steven Bodner talked about how directors and cinematographers are now having to adjust to how certain elements appear in HDR versus SDR, citing a project he's working on now where a scene featured several flickering candles. During the color grading process the filmmakers were actually taken aback by how intense the flames appeared on screen as they were a lot brighter than they were used to seeing with SDR post production. But while there will be a learning curve at first, the added color and contrast range opens up new storytelling choices, allowing directors to emphasize specific aspects of an image like never before.

On future display advancements, the panel also spoke about the possibilities of displays with higher nit peformance and the full Rec. 2020 color gamut. And though they admitted that the appreciable difference between P3 and Rec. 2020 will be less than between Rec. 709 and P3, they still feel that the added range will be able to yield benefits for certain types of content. Specifically, they used animation, fantasy and sci-fi films that feature deliberately unreal and exaggerated worlds as an example of an instance where the added gamut could come in handy.

After the panel, LG transported us to their new OLED TV Cinema House experience set up at Plaze 33 near Madison Square Garden in NYC. As its name implies, the home theater installation takes the form of a tiny house that a few guests can enter at a time. Once inside the cozy white room, attendees will find a comfy couch parked right in front of the company's amazingly thin (around one-fifth of an inch) 77-inch W7 "Wallpaper" 4K OLED TV which is attached to the wall with magnets. And in addition to the beautiful TV, the room also features a Dolby Atmos sound bar (included with the display) and an array of projectors mounted to the ceiling to create an enhanced sense of immersion during the demo.

For the demonstration, guests are shown a reel of video clips, including a few LG promo pieces and scenes from several Netflix shows in Dolby Vision and, in some cases, Dolby Atmos as well. Likewise, as the videos play on the TV, the projectors display a corresponding environment related to the clip on the walls around the room, making it feel as if you're fully surrounded by the content. 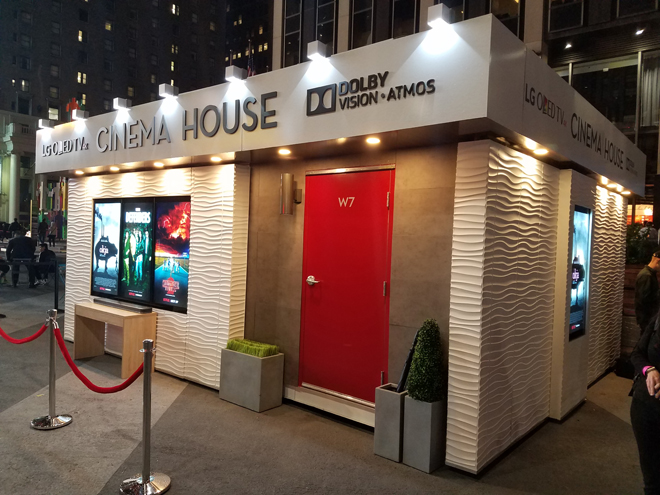 During our experience, we were treated to a scene from Okja where Mija (Seo-Hyun Ahn) plays around with the film's title creature in a forest setting. I've had the pleasure of seeing LG's OLED sets at other events, and the picture quality here was just as impressive, offering a gorgeous image with lush greens and sharp detail. Likewise, the Dolby Atmos sound bar filled the space with surprisingly enveloping and deep sound, often making it seem as if there were more speakers in the room. A falling rain effect at the end of clip gave off a convincing sense of overhead audio as well. All the while, the projectors extended the scene's atmosphere to the walls of the house, surrounding us with mountains on all sides.

A clip from Marvel's The Defenders was similarly engaging, showing off the team during an argument that pit Iron Fist (Finn Jones) against the others. The show features a fairly dark palette and the shadowy cinematography was great for highlighting the OLED's inky black level performance. Once again, the projectors extended the show's environment around the room, making it seem as if we were in the abandoned theater with the characters -- and when Iron Fist unleashed his powerful punch at the end of the clip, the projected walls around us crumbled and collapsed. 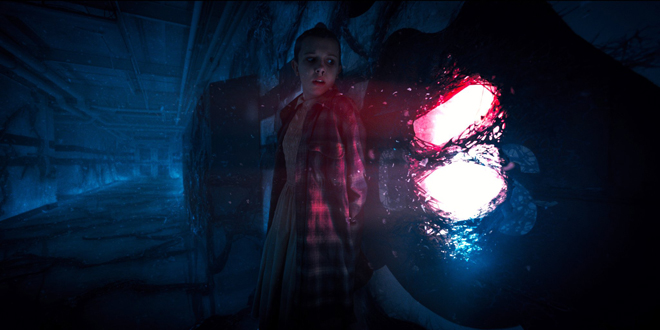 Finally, the demo also included a short preview scene from the upcoming second season of Stranger Things. The sequence features Eleven (Millie Bobby Brown) roaming the halls of the school in the Upside Down world and served as an extended version of the scene briefly shown at the end of the first season two trailer. After coming across a small portal in one of the walls, she places her hand through, pulls it back, and then starts to use her powers to shake the wall, making it seem as if she's either trying to break open a bigger hole or possibly collapse the portal entirely. And then... the clip sadly ended making the wait for the season two premiere on October 27 that much harder.

Though pretty short, the LG OLED Cinema House experience offers a fun demo of the company's latest top-of-the-line OLED with Dolby Vision and Dolby Atmos tech. The roadshow installation will be making several stops across the country, so readers who've been wanting to check out the impressive Wallpaper display in an immersive home theater setting should definitely stop by. Here's a rundown of currently scheduled locations and dates: