Walking into Formosa Group's loft-like Santa Monica offices is a bit of a homecoming. I haven't worked here, personally, but a few years ago I formed a friendship with Formosa employee Tim Hoogenakker, who is not only one of the preeminent Dolby Atmos re-recording mixers in Los Angeles, but also one heck of a nice guy. When we first met, Tim was re-recording stereo mixes into 5.1 (the DVD days) before seguing into 7.1 mixes for Blu-rays. More on all of this in a minute.

Formosa Group offices feel like the genetic coupling of a Silicon Valley startup and a Hollywood Studio. An ivy-strewn entrance leads to the vaulted ceiling reception area and a kitchen with beer on tap. The beating heart of a busy building. Hallways meander off in all directions to meeting rooms, office spaces, a server farm and, of course, dozens of sound mixing and recording environments.

In each of these environments, here in Santa Monica as well as across their four other Los Angeles locations, Formosa Group has in-house professionals ready work with various feature film, television, musical score, video game, and commercial productions. If you've watched ANY movies and TV, or played video games, in the last few years, there's a significant chance you've heard sound mixes and music that were created, edited, recorded, and/or finalized within the Formosa family.

The reason I'm at Formosa Group today is to demo Dolby Atmos (to be fair, that's usually why I'm anywhere). I write about the technology a lot, but if you haven't been following along at home, here's a quick recap:

Dolby Atmos redefined home and theatrical surround sound, taking conventional surround mixes, which were built for a specific number of "channels" in hopes of creating 360-degree immersion, and adding individual sound OBJECTS to the mix as well as OVERHEAD SPEAKERS.

The result is an enveloping HEMISPHERE of sound.

The home entertainment version of Dolby Atmos works by adding height channels to traditional 5.1 or 7.1 configurations. And, because customers don't always want to cut holes, Dolby partnered with speaker companies like Klipsch, KEF, Definitive Technology, Pioneer, and Onkyo to make Atmos-enabled speakers and add-on modules, which bounce height sound elements off your ceiling, tricking your ears into believing you have in-ceiling speakers. Cool, right? 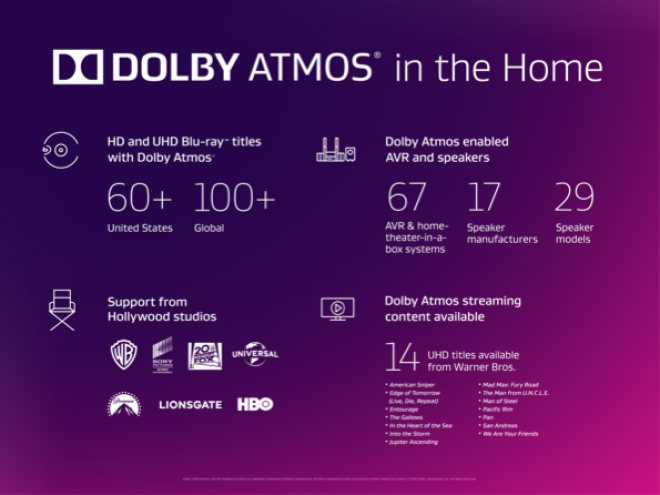 As of May, 2016, Dolby Atmos is built into 67 AVR and Home Theater-in-a-Box systems, not to mention 29 different speaker models. With support from every major studio home entertainment division, except Disney, you can find (or will soon be able to find) Dolby Atmos on 43 Blu-ray titles, 17 Ultra HD Blu-rays exclusives (won't release on Blu-ray), and 6 OTT streaming exclusives on VUDU UHD. Looking at global availability, or announcements, that title-count jumps from 66 to 100+.

Of those 100+ titles announced, around one third of all of them, have passed through the hands of the folks at Formosa Group. Which brings us back to my buddy Tim Hoogenakker. 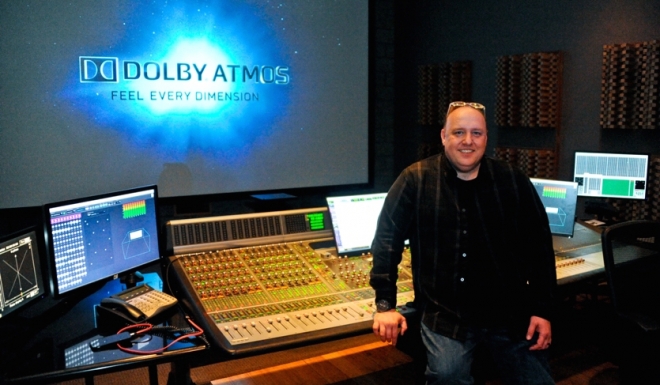 Tim works with Dolby Atmos soundtracks every day (almost as much a me!), dividing his work between two main jobs: up-mixing to Dolby Atmos, and near-field re-recording for Dolby Atmos.

Near-field re-recording is a process where artisans like Tim get all the elements from a recent theatrical mix (like say the 'The Expendables 3', another Atmos event where you might have read about Tim's work) and tweak it for the home experience. Granted, it's possible to plug-and-play Atmos mixes into the home environment (Dolby's that good), but there's a chance this experience may be affected by the volume differences between large cinema auditoriums and homes.

Theatrical mixes need to move a LOT of air. 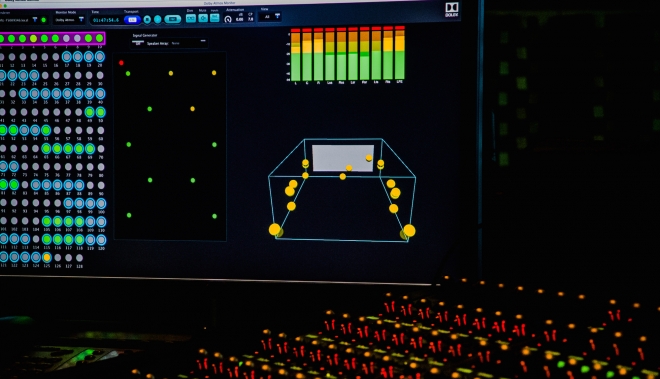 Tim, for his part, adjusts near-field mixes for our smaller home environments, ensuring levels are consistent and pans stay true. Basically, it's Tim's job to retain the original Dolby Atmos theatrical mix as much as possible. It's actually fascinating to watch this process in-person, as the Dolby Atmos mixing suite includes a visual representation of all the sound objects in 3D space (pictured above).

Tim's other main job is to up-mix older 5.1 or 7.1 mixes into Dolby Atmos. Tim hates to brag, but he's the mad scientist responsible for the titanically awesome work done for 'Bram Stoker's Dracula', 'The Fifth Element', and 'Game of Thrones' Seasons One, Two, Three, Four, and Five... All of which prove Dolby Atmos is a fantastic option for many different types of content, old and new.

Tim's Formosa Group Demo was a special treat. Not only did we revisit Tim's work that you can buy right now, but Formosa received special permission to have Tim do one-off Dolby Atmos up-mixes for three clips just to show off the format's capabilities to press and filmmakers, demonstrating how hemispherical, object-based sound mixing is the best of the best.

With clips from 'The Hunger Games: Mockingjay Part 2' (available commercially) and 'The Hunger Games' (unavailable), we were treated to the delicacy of object sound placement -- trackerjackers everywhere! -- as well as Dolby Atmos' ability to world build, evoking a cavernous hangar as well as a cramped aircraft interior.

But Dolby Atmos is more than just for action movies, as demonstrated by a clip from Eric Claptain's 2013 'Crossroads' guitar festival. As John Mayer & Keith Urban perform "Don't Let Me Down", Dolby Atmos was less about cinematic immersion than it was placing listeners in a stadium to recreate the CONCERT EXPERIENCE -- music heavily in the front, with crowd atmospherics and reverb overhead and around.

Next, we turned to TV, which these days is often more cinematic and character-focused than feature films. For this demo, we heard an exclusive-to-the-event mix from Showtime's 'The Affair', which featured a pool scene and rain. Submerging and popping out of the water, walking through the deluge, we were laser focused into the main character's POV. In that sense, Dolby Atmos is less look at me!  and more putting the audience into the mind of a character so we get to feel what he is feeling in ways that were previously impossible. Lastly, we were treated to a dragon-enhanced gladiator battle from Season Five of 'Game of Thrones'. Fortunately, you CAN buy this one, and you should, because this sequence of dragon roars and flapping wings is only one of many demo-worthy moments in this multi-disc set.

Damned impressive is the only way to describe it. 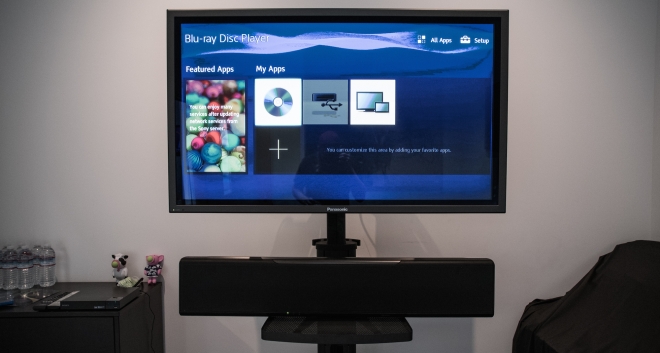 We were also able to demo the same clips from 'The Hunger Games', 'Crossroads', and 'Game of Thrones' on the new Yamaha YSP-5600 Dolby Atmos soundbar, which helped us compare and contrast the full mix in a 7.1.4 environment to a soundbar-sub combo that sells itself as 7.1.2... I won't say too much about that just yet because I actually have the YSP-5600 in for review right now, so I'd like to spend a little more time with it before making full conclusions.

But I will say two things: YES, it does an admirable job recreating the side surrounds as well as the overhead experience -- which for me is the main reason in adding Dolby Atmos to a home cinema or soundbar -- but NO, it doesn't quite recreate the sensation of rear surrounds. To me, it's more like a 5.1.2 system. More on that another day.

Thanks again to Formosa Group, and Tim, for inviting me and others to visit your Santa Monica offices. As a home cinema geek, it's beyond cool to meet the people and get a sense of the facilities (at least partly) responsible for the Dolby Atmos mixes we experience in our home theatres.

If you're a producer looking for a place to finish your sound mix, or re-record an older title, in Dolby Atmos, I can't recommend Formosa Group enough.

And if you're like me a few years ago, where you love surround sound because of how it envelops and pulls you into your favorite stories, then it's time for you to start picking out some new gear. There's an Atmos budget for almost everyone, from sub-$500 home theatre-in-a-box systems to money-no-object premium speakers. And with new gear you can even listen to NON-Atmos mixes in the Atmos-esque Dolby Surround (although Dolby's up-mixer not quite as talented as Tim).

I know I have my personal favorites, but if you're already a Dolby Atmos adopter, what's your favorite mix so far and why? Hit us up in the forums or the comments down below. Cheers!