I was mid-review on the outstanding Denon AVR-X6200W 9-Channel AV Receiver when I came upon the topic of AVR sound processing, or up-mixing, and realized it might make a better standalone piece where we could talk about the sound processing outside the confides of a single product review.

Before we dive in, I want to make it very clear: Dolby and DTS fandom can run a little hot 'round the collar, but I'm not setting out to crown a winner here. Rather, my intention is to give you a baseline of expectations when comparing the two technologies and how they perform in adding height sounds to traditional surround experiences, be they stereo, 5.1 or 7.1 sources.

Also, my apologies for not including AURO 3D, which has also become available as a $150 firmware upgrade on some Denon AVRs, but my living room layout makes properly configuring AURO a bit of a headache, so I'm gonna have to sit that format out until further notice.

For the purposes of our discussion today, let's get really simplistic and say there are two types of sound experiences for the home cinema environment:

DIRECT experiences are simply when your AV Receiver DECODES a particular mix, be it stereo or 5.1 or Dolby Atmos. Outside of compression issues and speaker variances, you're hearing exactly what the filmmakers want you to hear.

Take me for example. I'm currently rocking a 7.2.4 KEF R Series speaker configuration capable of reproducing DIRECT sound mixes like Dolby Atmos and DTS:X. With these tracks, the Denon AVR-X6200W simply places certain sounds in certain speakers per the decoding algorithms built into Atmos and X.

When you, an avid home cinema enthusiast, end up with more speakers than a particular sound mix offers, in terms of channels or objects, you've entered the realm of UP-MIXING.

Up-mixing isn't new, of course. Dolby Pro Logic and DTS:Neo were likely part of many home surround experiences long before the prevalence of multi-channel surround sound. In addition to Dolby and DTS technologies, many AV Receivers also come with their own proprietary up-mixing modes. All of these up-mixing processors transformed 2.0-5.1 mixes into 5.1-9.1 experiences.

Dolby Surround and DTS:Neural:X are the latest generation up-mixing processors to land in 2015+ AVRs, offering not only surround performance upgrades for stereo and 5.1 mixes, but also height channel atmospherics for stereo, 5.1 and 7.1 mixes.

UPDATE 1/30/17: The original version of this article was written at a time when DTS:X and DTS:Neural:X were semi-rare features on AVRs. Further, there was a complication with the way Denon/Marantz implemented Dolby Surround and DTS:Neural:X. Last fall, Denon updated the firmware for early 2016 model AVRs, and they can now apply Dolby Surround to DTS codecs as well as DTS:Neural:X to Dolby codecs. Also, as manufacturers revise and replace model lines, most AVR brands now offer a complete range of Dolby, DTS, and brand-based proprietary decoding and up-mixing capabilities. In other words, what was "semi-confusing" six or seven months ago is now exceptionally simple.

Since surround sound up-mixing has been around for a decade or so, we're going to focus mainly on height speaker performance to investigate how Dolby Surround and DTS:Neural:X create full hemispherical surround immersion. 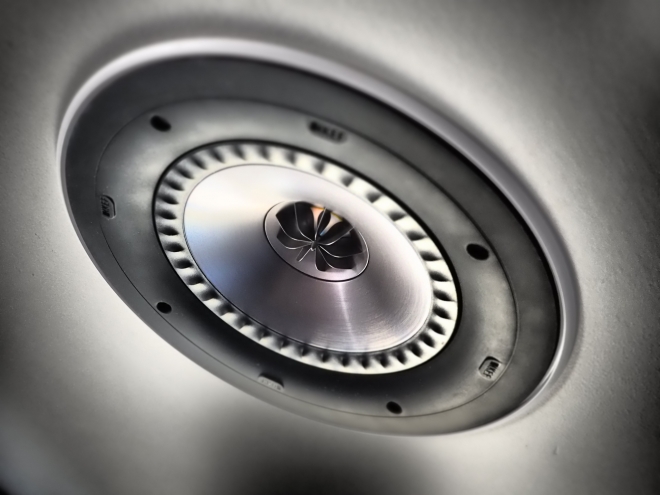 To do this, I took three Blu-rays with terrific multi-channel soundtracks and set them to output via multi-channel PCM, then watched MLB baseball on ESPN with my DVR outputting two-channel PCM, all while toggling back and forth between  to get a sense of how these two up-mixers each sounded in full 7.2.4 KEF glory...

Then I unplugged all my ear-level speakers.

Using ONLY my four KEF Ci200RR-THX in-ceiling speakers, I listened to what Dolby Surround and DTS:Neural:X isolated as "height sound" and tossed upwards.

The results were fascinating.

If you want to play along at home, my first demo is 'Seven', Chapter 35. As the film's insanely tense climax builds, Dolby and DTS both pushed skyward the droning musical score, helicopter rotors, and the echo of a gunshot. Outside those elements, dialog and most sound effects remain ear level (effectively invisible to me).

On this track, Dolby and DTS did very similar things, sonically, but measurements demonstrated DTS:Neural:X to be approximately 2-4dB more aggressive with height speaker volume levels, a measurement that was pretty consistent across the remainder of this experiment. An interesting choice, for sure. I know when I calibrate my speaker configuration, I personally to bump up height speakers about 2dB for a greater sense of immersion. In that sense, I definitely see how some listeners will flock to Dolby's more balanced approach, while others might enjoy DTS' more aggressive one.

Important to note: in casual listening, when all the ear-level speakers are running too, it's MUCH harder to hear the volume difference between Dolby Surround and DTS:Neural:X, but it might be important to you, so I thought it worth mentioning.

Next I moved to 'Road to Perdition', Chapter 4. Right about the 24 minute mark, Tom Hanks' son, standing outside a warehouse in the pouring rain, peeks in at the gangsters who are questioning a man in a chair. The rain is obviously the star of this sequence and both up-mixers crush it. But that changes when the characters start talking. Voices reverberate upwards in both up-mixers, but when you listen closely at the word "liar", the up-mixer react in strikingly different ways.

Dolby Surround produces cleaner reverb and the entire word -- liar -- is crisply audible, creating a much more lifelike warehouse echo. DTS:Neural:X, on the other hand, stumbles on individual voices, the world "liar" warbling between front and rear height speakers, revealing an obvious sense of digital processing.

This "warbling" was confirmed during MLB Baseball. Both DTS:Neural:X and Dolby Surround placed extra stadium crowd noise in the height speakers (and in the surround when those are plugged in). It's a fantastic effect; all sports should be watched this way. However, in the DTS version, announcer voices kept flitting in and out of the front height channels, almost like a radio signal coming in and out of range. I suspect the cause here is a less-than-elegant stereo PCM downmix my DVR was outputting at the time, but it still reveals a little more about how these two up-mixers do what they do. Unfortunately, I was unable to examine the baseball's native 5.1 mix because DTS:Neural:X is not an option on the X6200W when Dolby Digital is detected.

For my last demo, I went with 'Top Gun', Chapter 1. In your height speakers, you will hear elements of Kenny Loggins' Danger Zone as well as various roaring jet effects.

Once again the results surprised.

DTS:Neural:X was not only louder, but also more accurate in its height channel panning. There's a fantastic moment where a fighter jet takes off towards camera. With your entire sound system engaged, there's a tremendous whoosh as it screams past the right side of your listening environment and out to the rears. DTS:Neural:X mimics this screaming whoosh from front-right-height to rear-right-height speakers in a very dramatic fashion. Dolby Surround, by contrast, offered no such panning for this one effect, but instead ramped up front and rear rightside height channels equally, and in a much less dramatic fashion. This is something I did not notice with the entire system engaged.

At this point it was time to put my system back together for a review. It's fair to say, for more thorough and conclusive results, we'd probably want to check a hundred hours of content, but after these four demos and dozens of hours enjoying each up-mixer with a full 7.2.4 system engaged, I have a pretty good handle of how they each peform (from an audience perspective). More important than finding a "winner" is that we enthusiasts get to have an utterly smile-inducing surround sound experience whenever we want. In that sense Dolby Surround and DTS:Neural:X perform remarkably well (they also each have MUSIC modes).

What can we take away from this and similar experiements?

For the most part you could leave your AVR in one format or the other and never notice; that's what I did back in the Pro Logic IIx days. Likewise, if your first generation DTS:X-capable Denon or Marantz AVR is temporarily locking each up-mixer to its own branded codecs, you'll enjoy the results, but you might notice variances in the way your system sounds depending on content. However, assuming you have a choice between the two, Dolby Surround excels at spacial recreation and voice placement. It's more refined and delicate. If you feel as though you need more oomph overhead, DTS:Neural:X is a little louder and I also enjoyed the way it panned aggressive sound effects.

Thanks again to Denon for loaning us the fantastic AVR-X6200W. A full review will be up shortly.

Does your AV Receiver offer both Dolby Surround and DTS:Neural:X? Do you have a preference? Why? Is this preference for all content, or some? Jump into the FORUMS (link below) to let us know. Cheers.