'Mars' Blu-ray Up For Pre-Order

The National Geographic film from Brian Grazer and Ron Howard will land on Blu-ray next year.

In an early announcement to retailers, 20th Century Fox says 'Mars' will arrive on Blu-ray in 2017.

From executive producers Brian Grazer & Ron Howard, MARS is an epic series following a thrilling quest - in 2033 - to colonize Mars. In a unique blend of scripted drama and feature-film caliber visual effects, intercut with documentary sequences, the series presents what the greatest minds in space exploration are doing to make traveling to Mars a reality, and shows us the world they seek.

You can find the latest specs for 'Mars' linked from our Blu-ray Release Schedule, where it is indexed under PENDING. 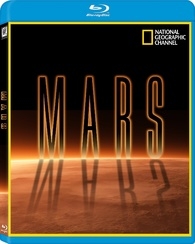