Roland Emmerich's explosive film will be getting a 4K Blu-ray release in June.

Experience the original OSCAR®-Winning* sci-fi epic that launched a new era in blockbuster filmmaking. Director Roland Emmerich, producer Dean Devlin and an all-star cast including Will Smith, Jeff Goldblum and Bill Pullman join forces to deliver the ultimate encounter between powerful aliens and the human race. When massive spaceships appear in Earth’s skies and blast destructive beams of fire down on cities all over the planet, a determined band of survivors must unite for one last strike against the invaders before it’s the end of mankind.

The release will feature both the newly restored Special Edition and original Theatrical Cuts with a DTS:X soundtrack and supplements will include: All-new 30-Minute Documentary – Independence Day: A Legacy Surging Forward (Featured on Disc Two of Blu-ray); Commentary with Director Roland Emmerich and Producer Dean Devlin; Commentary with VFX Supervisors Volker Engel and Doug Smith; and Datastream Trivia Track.

You can find the latest specs for 'Independence Day: 20th Anniversary Edition' linked from our Ultra HD Blu-ray Release Schedule, where it's indexed under June 7. 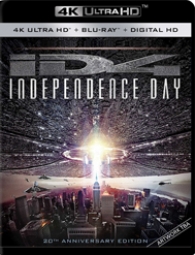