Ryan Reynolds puts on the anti-hero's tights and heads to Ultra HD Blu-ray later this year.

In an early announcement to retailers, 20th Century Fox says 'Deadpool' will be pummeling Ultra HD Blu-ray in the spring.

Wade Wilson (Ryan Reynolds) is a former Special Forces operative who now works as a mercenary. His world comes crashing down when evil scientist Ajax (Ed Skrein) tortures, disfigures and transforms him into Deadpool. The rogue experiment leaves Deadpool with accelerated healing powers and a twisted sense of humor. With help from mutant allies Colossus and Negasonic Teenage Warhead (Brianna Hildebrand), Deadpool uses his new skills to hunt down the man who nearly destroyed his life.

You can find the latest specs for 'Deadpool' linked from our Ultra HD Blu-ray Release Schedule, where it's indexed under PENDING. 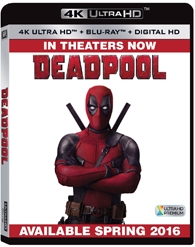