Four teenage friends Q (Omar Epps), Raheem (Khalil Kain), Steel (Jermaine Hopkins) and Bishop (Tupac Shakur) make up Harlem’s Wrecking Crew. Their little gang ducks school, dodges the cops, and hustles quarters and dollars at the local arcade. But when a rival Hispanic gang comes knocking around, they don’t get the respect they deserve, they don’t have the “juice.” As Q works to get noticed as an up-and-coming DJ, Bishop and the rest of the crew hack a plan to up their street cred with deadly consequences.

The “urban drama” was a staple of the late 80s and early 90s. Films like South Central, Fresh,  Boyz n the Hood, and Menace II Society were examples of black filmmakers essentially taking control of the modern gangster drama and expressing it through their worldview. A lot of flack was thrown at these films that they glorified “gangland” violence but true to genre form with such classics as Angels with Dirty Faces, Scarface, and The Roaring Twenties - these are actually tragedies. These are films about a group of people fighting to preserve their souls any way they can, even if that means a life of crime. Often overlooked in this 90s gangster renaissance is Earnest R. Dickerson’s Juice. This film has all the strength and impact of its comrades but was unfortunately tainted thanks to some studio interference for the climax. 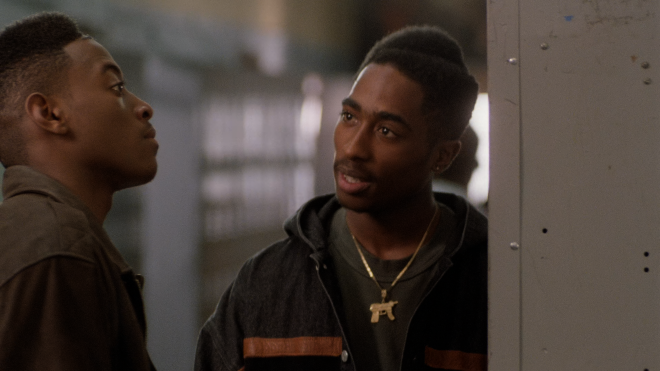 Now I’m obviously not going to give away the end of the film - but when you see the bonus feature “You’ve got the Juice” you’ll see that a lot of this film’s potential power and resonance were robbed by forced edits and an audio epilogue. I’ve been hoping that the original ending would be fully restored, but it still rests as a bonus feature curiosity. Thankfully this neutered ending doesn’t completely upend the film. The magnetic cast of young actors and Dickerson’s work behind the camera hold the film tight. 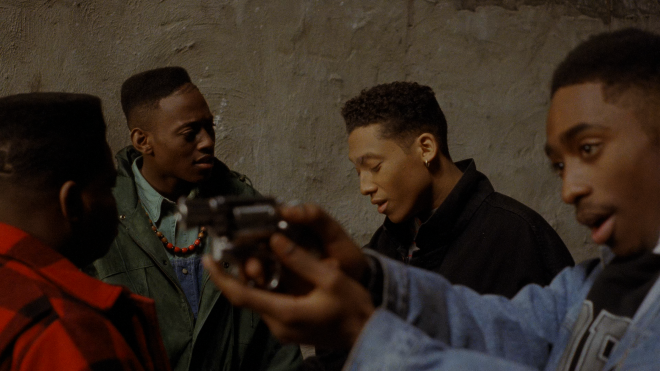 I hadn’t seen Juice for the better side of 15 years. I had it on DVD and saw it a lot in school so it became one of those films I just didn’t have the urge to revisit. Part of that has to do with my feeling Menace II Society and Boyz n the Hood are better-made films that this one doesn’t often come to mind other than to state the obvious “Tupac was amazing in it!” That said, I’m glad I got to revisit it for this review because left to my own devices I probably wouldn’t have picked up Juice on 4K since I never even grabbed it on Blu-ray. This movie isn’t just a showcase for how great Tupac was as an actor, but a whole crew of talent. Omar Epps, Khalil Khan, and Jermaine Hopkins all shine. They bring authenticity to their characters that make their joys and pains feel genuine. When betrayal and jealousy seep into their relationships you see and feel that with the intensity all four actors of the Wrecking Crew brought to the show. all of these great young actors were handled with the sure hand of Dickerson's steady direction and smart screenplay.

Vital Disc Stats: The 4K Ultra HD Blu-ray
Juice celebrates 30 years of respect with a new 4K Ultra HD Blu-ray release from Paramount. A single-disc + digital edition, the film is pressed on a BD-66 disc and housed in a standard sturdy black case with identical slipcover artwork. The disc loads to an animated main menu with traditional navigation options. A SteelBook Edition is also available. 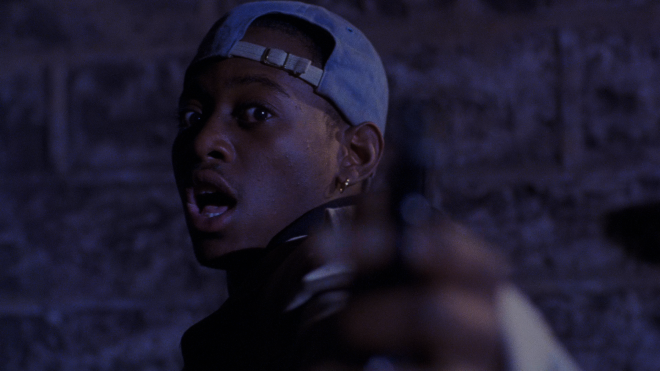 Juice celebrates its 30th Anniversary with a largely pleasing and overall excellent - but not quite perfect - Native 4K Dolby Vision HDR (and HDR10) transfer. Let's get the rough patches out of the way first because most of the transfer is genuinely excellent. SO - there’s a bit of a compression issue that crops up from time to time, namely when the film cuts to a shot with an intensely bright background. There’s a brief fluctuation where the bright sky, or lights, or pale wall will become blocky and unresolved for a short couple of moments. It’s not a glaring issue, again it’s very brief and I didn’t notice it right away, but when I saw it once at about 30 minutes in I went back and saw it again at around the 15-minute mark and later at the DJ battle. I checked bitrates and most of the time the film is hitting high 50mbps with peaks in the 80mbps range, but for these macro blocking incidents, the bitrate plummets to the low 20s and then quickly shoots right back up once the artifacting resolves itself. Again, this isn’t the worst issue and it’s barely noticeable unless you’re really looking for it, nonetheless, it’s an issue to kick this otherwise perfect transfer for.

And I mean this is an otherwise perfect transfer. It’s gorgeous. From the getgo details are exceptional as the film opens exploring the home life of each member of the crew, we see all of the intricate details in decore and clothing. Facial features, hairstyles, clothing textures are all crystal clear. Film grain is present - albeit heavier and more pronounced in a few action sequences, but otherwise an organic film-like appearance. 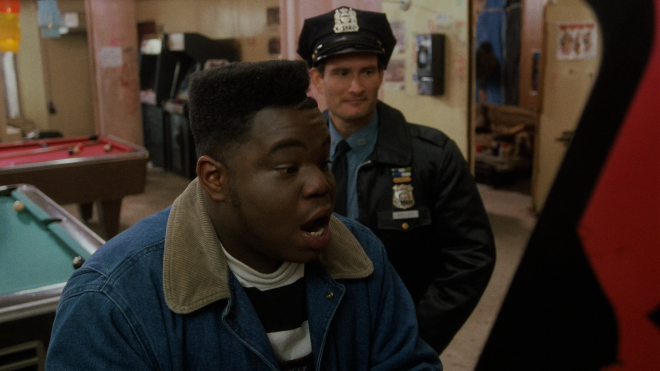 With Dolby Vision HDR, colors are bright and vivid with impressive primary pop. From the opening titles to the clothing to the bright blue walls of a particular bar, shades are lifelike without being blown out or washed out. Black levels are also pitch-perfect allowing for deep inky blacks with excellent shadows avoiding crush. Contrast is equally on point without issue. I know I opened this portion of the review on a rough note, but those scant few problem seconds are hardly an issue compared to the rest of this excellent video transfer. 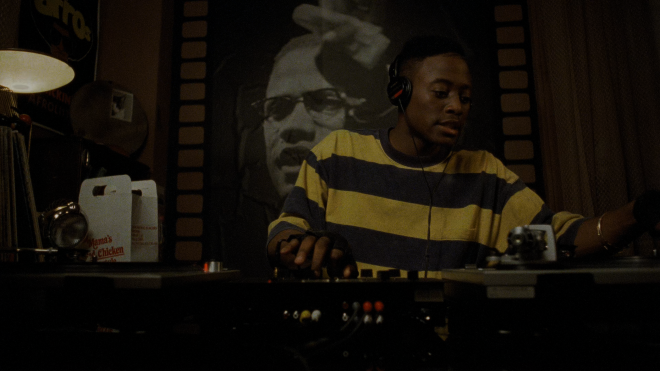 Juice also comes with a pleasing DTS-HD MA 5.1 mix that’s engaging but doesn’t always make the most of the full soundscape. For much of the film, the mix is very front/center heavy with only some incidental movements into the side channels. The most “surround” heavy pieces of the mix are thanks to the excellent rap-infused soundtrack and the DJ battle scenes. Even big action moments like when the cops are chasing after the crew early in the film or the key robbery sequence - the mix stays in that comfortable front/center realm. It’s not bad, it’s still a solid track, but it’s not something that’ll blow your hair back. Even with DTS Neural:X engaged, there wasn’t much separation or notable enhancement. For some key sequences, it’s hard not to wonder what a DTS:X or Atmos track might have done for the film. 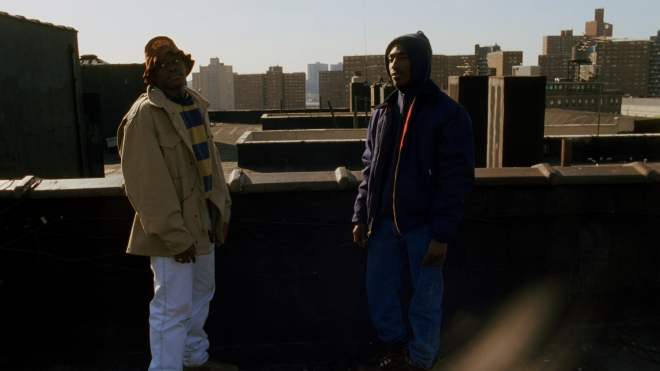 None of the bonus features for this release are new, but collect all of the extras from the 25th Anniversary release. If you haven’t gone through them before, they’re well worth digging into. Dickerson’s commentary is a great listen as he covers a lot of ground about working with the cast, on location in Harlem, and of course the end of the film. Just as good are the main interview segments with the cast and crew. 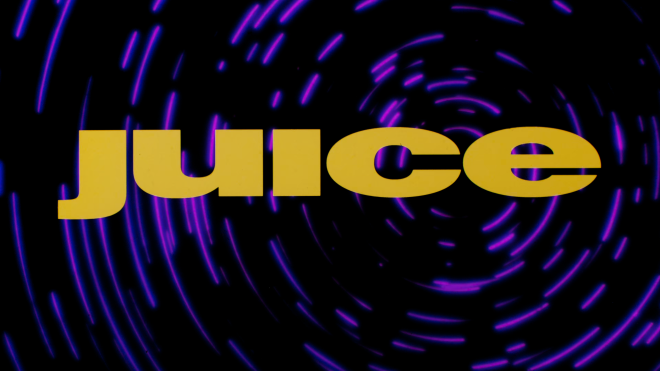 Juice is a hell of a film. It’d been far too long since I last gave it a look and it still holds up remarkably. Dickerson assembled an impressive cast with four unproven leads bringing genuine A-Lister performances to the show. 30 years on this film still brings the full weight and impact of its story to the screen - even if I wish Dickerson was allowed to present his original unaltered ending. I didn’t pick up this film on Blu-ray - but I’m glad to have it on 4K. While the macroblocking is a small issue, the rest of the transfer is exceptional. The audio is effective but maybe not as strong as it could or should be. Bonus features may not be new, but they were new to me and they’re well worth digging into if you haven’t given them a look already. If you’re feeling the need to give Juice some 4K respect, it’s a solid disc. Recommended.