Michael Myers' reign of brutal violence and bloodshed continues in the aptly named Halloween Kills. David Gordon Green returns as director and co-writer for this latest installment that brings Michael’s kill count to an all-time high for the franchise but loses focus when the film tries to find a story or a theme. Hopefully, Halloween Ends is the fitting conclusion to this new trilogy it needs to be. Universal Studios once again delivers an excellent 4K release for the franchise with a moody and dark Dolby Vision transfer with an impressive Atmos audio mix and plenty of interesting bonus features to slice through. This film wasn’t for every fan but if you enjoyed it this disc is well worth adding to the collection. Recommended.

Laurie Strode (Jamie Lee Curtis) waited 40 years for the night that Michael would return. And after his insane doctor let him loose to see what he would do, Laurie got her chance to end Michael Myers once and for all. Her home used as a trap and set ablaze, Michael would die and her daughter Karen (Judy Greer) and granddaughter Allyson (Andi Matichak) would survive. Only evil doesn’t die. A little charred, a little crispy - Michael emerges from the fire with a renewed vigor for murder mayhem and madness. Now survivors of his original night of terror Tommy Doyle (Anthony Michael Hall), Lindsey Wallace (Kyle Richards), and Michael’s former nurse Marion Chambers (Nancy Stephens) are determined to see evil die tonight and turn the peaceful people of Haddonfield into a bloodthirsty mob.

2018’s Halloween was a wild prospect I never thought we’d ever see. After two less-than-amazing remake entries, The Shape looked like he was on the verge of just rolling through the churn and burn remake/sequel cycle. Leave it to comedy writers and director David Gordon Green and Danny McBride to conjure up a reason for the series to return. Taking the bold step of slicing out nearly 40 years of sequel/remake history, the 2018 film was a fresh and bloody restart. Not perfect, but pretty damn good. Going into Halloween Kills, expectations were understandably high for where the franchise would go next. 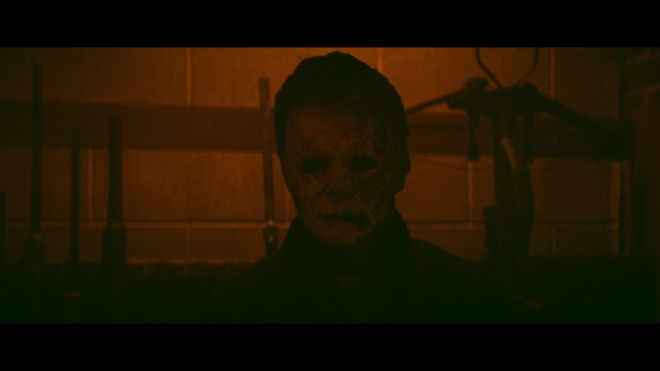 Truthfully the idea of how a horrible event affects an entire town is a theme well worth exploring. How do people cope and heal or do they fall and become a new worse version of their better selves? Pretty weighty stuff to consider but this movie doesn’t really want to explore that too much. It tries to address these ideas during a speech by survivor Tommy Doyle during a Halloween talent show, but anything meaningful fails to come of it. It’s not a great thing when your two best performances are from a hospital bed-ridden Jamie Lee Curtis and Will Patton trying to come to terms with their survivor’s guilt. The idea of the Haddonfield Mob could have been something if that “Evil Dies Tonight” theme hadn’t been so overworked. When Nancy Stephens’ Marion Chambers throws that out for the first time it’s a big eye-roller and it never works no matter how many people say it or how often. 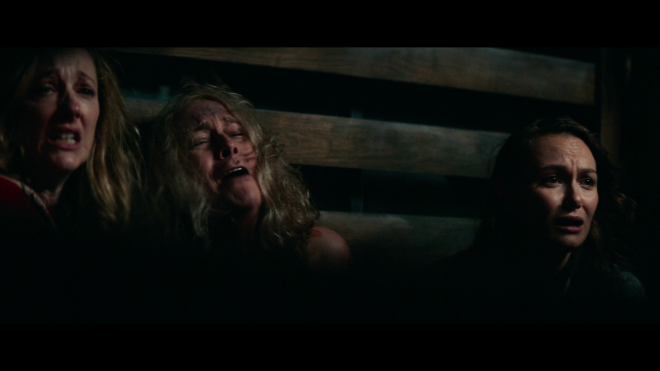 This particular entry is at its best and most entertaining when Michael gets to do what he does best. If bloodletting and gnarly kills were a business, Michael is booming. I know a lot of people took issue with the brutality of this film but in all honesty, Mikey has been on that train for a while. Between jabbing needles in people’s eyes, boiling a nude woman’s face, claw hammers to heads - Michael has enjoyed killing in wildly inventive ways since the now non-canonical Halloween II. This film just offers a lot more of what we saw in 2018 Halloween. And I dug it for that. There are some genuinely pretty great suspense sequences that paid off with particularly bloody execution. Where these sequences don’t work is when Green and McBride work in some silly tone-deaf slapstick comedy with how people try to attack Michael and get themselves killed in the process.

Now available in a slightly longer Extended Cut with a “new” ending - Halloween Kills isn’t a better or worse movie than what you saw in theaters or on Peacock. It’s just a little more gore and a little extra slice at the end to lead into the next film. If you didn’t like the movie before, there’s nothing in those four new minutes that’ll change your mind. Personally, I think they should have used this new ending theatrically. I get why they didn’t but it’s what people needed to see. It doesn’t fix anything but it at least sets the tone for what’s to come. 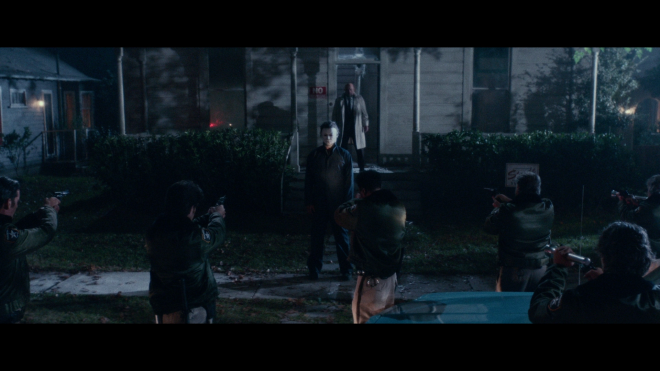 Since Green and McBride were open from day one that this would be the middle part of a trilogy, Halloween Kills ultimately suffers from a near-terminal case of Middle-Movie-Itus. With flashbacks to 1978 and an opening that plays in tandem with the events of the 2018 film, Halloween Kills is more like a collection of extended prologue and epilogue scenes than a unique story. Think The Matrix Reloaded where you get a lot of great action sequences and setup for the final adventure. You get a lot more of what made the last entry entertaining but little of anything that actually has a purpose and moves the story forward. This is one of those middle films that feel like you have to “get through” to hopefully fully enjoy the final film. Now it’s all up to Halloween Ends to bring the show home. Hopefully, it can all come together and sew this trilogy up and make it all worth the effort. I didn't hate this movie, but I had hoped for something a little more than what we got.

For another take on the film, Read Our Theatrical Review

Vital Disc Stats: The 4K Ultra HD Blu-ray
Halloween Kills comes home to slaughter your collection on 4K Ultra HD Blu-ray from Universal Studios in a two-disc 4K UHD + Blu-ray + Digital set. Pressed on a BD-100 and BD-50 disc, the discs are housed in a standard sturdy black case with an identical slipcover with raised textured features. The disc loads to a main menu with simple basic navigation options on the bottom with the bonus features menu along the right side. 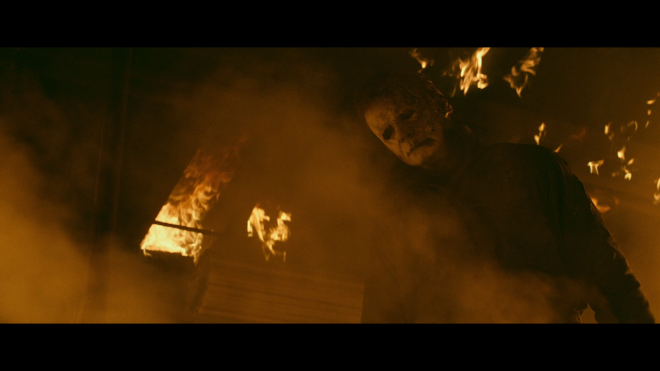 I for one am glad that Halloween Kills earns a pretty damned impressive native 4K 2160p Dolby Vision HDR transfer. My theatrical screening was pretty bad with a fading projector bulb that made some of the darkest scenes difficult to see while Peacock has to be one of the worst streaming platforms out there. This 4K version felt like I was actually seeing the movie. One of the best aspects of this film was its production design - especially for the recreation 1978 sequences. There are a lot of little pieces of the old rundown Myers House that was so intricately recreated right down to the appearance of broken windows and all of these details are on display. Michael’s burnt mask and singed coveralls - and the copious amounts of nasty gore wounds get the love and attention they deserve. 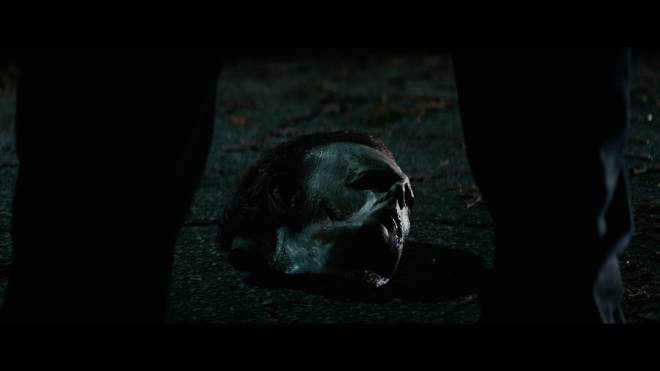 Dolby Vision HDR (and HDR10) really brings this movie to life. You get deep vivid crimson reds for all of the bloody bits. Yellows pop nicely, and blues get a few choice moments with emergency vehicle lights and that antiseptic green/blue tint at the hospital. When Michael emerges from Laurie’s burning house - that’s some great blend of shadows and light with the bright oranges and yellows bathing the scene.  Black levels are the real pickup here. Compared to the included 1080p Blu-ray, the shadows are much more natural and balanced giving the image a more noteworthy sense of three-dimensional depth. Whites are also well-balanced and crispy without blooming. There is at times a haziness to the image that can look a little noisy but nothing too distracting. 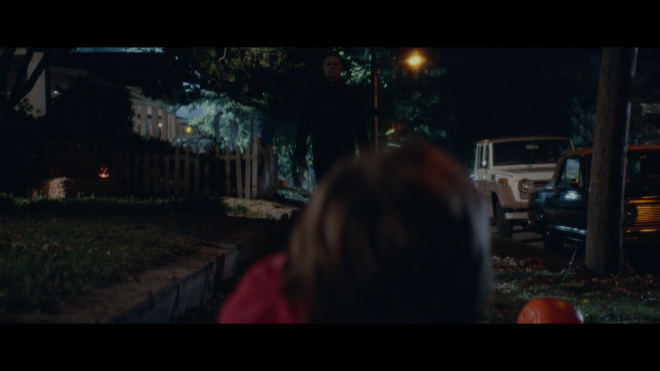 For a slasher that likes to go bump in the night, Michael Myers is treated to a pretty damn creepy and effective Atmos audio track. From one location to the next, the soundscape is appropriately active and engaging. Early in the film when first responders arrive at Laurie’s burning house is a terrific example of what this Atmos track has to offer. You get the roaring blaze encircling all of the channels with timbers falling overhead, firemen screaming in the front/center, and creaking cracking wood and wooshes of fire hitting the sides.

Dialog is clean and clear throughout without issue. The front/center and side channels do most of the heavy lifting with rears and overheads kicking in for incidental effects and atmospherics. Even sparsely used, there are still some great overhead effects - Michael stomping around upstairs during the 1978 flashback sequence or the mass of people running through the hospital. 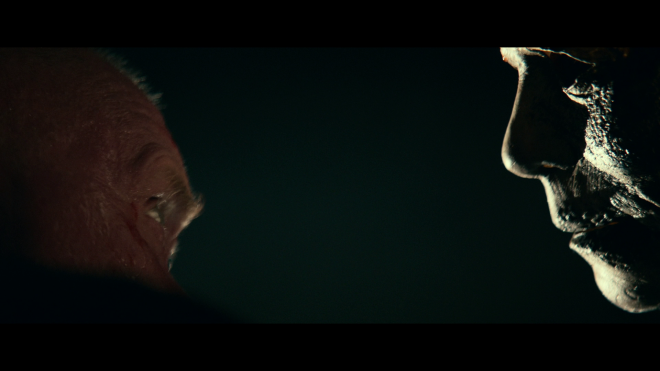 John Carpenter, Cody Carpenter, and Daniel Davies’ score is worked into the mix perfectly with certain notes and beats kicking specific channels including the height and rears for extra mood. The score also triggers some nice rumble in the subs for those low dissonant tones. 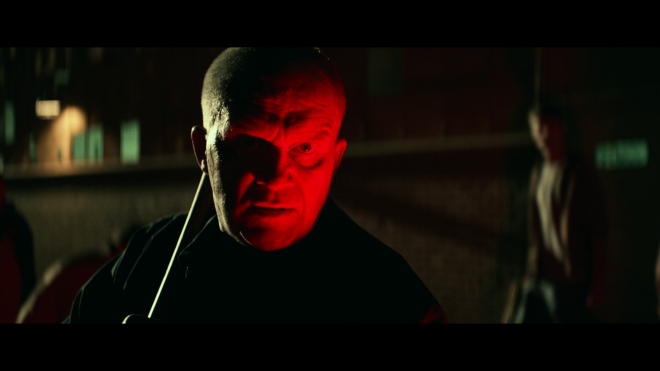 Not to leave anything behind - Halloween Kills comes packed with a nice assortment of bonus features. Certainly not the biggest collection ever but you get some nice stuff here. The pick of the litter is the audio commentary with David Gordon Green, Jamie Lee Curtis, and Judy Greer. Recorded together they’re an engaging trio with Curtis and Greer filling up a lot of the track with recollections working on the film and other tidbits. Green also drops a couple of hints about things to come in the next installment and why a recurring background structure is so regularly seen. After that, we get the typical gag reel and some new deleted scenes that really don’t add anything. There’s an extra bit that would have come at the very end of the alternate ending that was very wisely cut. The best of the featurettes is the 1978 Transformations segment showing how they recreated the Myers house, the costumes, the mask, and hiring the construction manager and some makeup to bring Dr. Loomis back to life without hacky CGI. The Kill Count segment is a fun bit - but it also leaves little doubt about the fate of a couple of key cast members so spoilers be warned there. 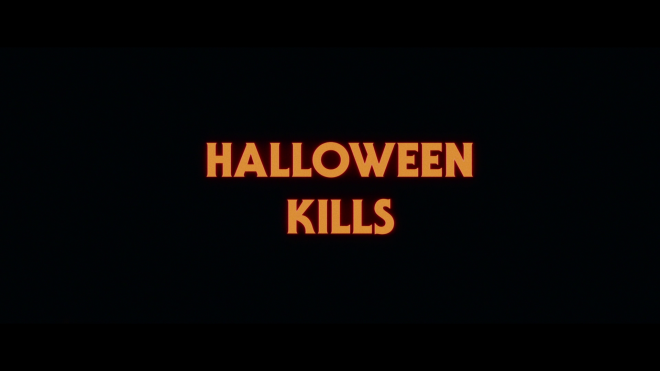 Halloween Kills works really hard to be something more than it is. It tries to open things up and let in a lot of the extended family of characters and make them relevant, but it doesn’t have a story thrust to make that effort worth it. It feels very much like the film you watch so you can watch the next and hopefully better movie. While I did enjoy this entry, I am not in the camp that calls this the worst of the franchise, but I am reserving final judgment until Halloween Ends hits theaters on October 14th 2022 (if we're all still alive). Hopefully, that movie doesn’t blow it.

For those who got a kick out of this latest entry in the ongoing Halloween franchise, Universal has delivered a rock-solid 4K Ultra HD Blu-ray. The native 4K transfer offers a clean and clear image with an impressive Dolby Vision grade giving deep inky blacks and bold primaries. The Atmos track for this film is a lot of fun fully engaging the channels to give fans an immersive experience. Bonus features are all solid - the featurettes may be a bit “talking head” but the commentary is excellent and some of the behind-the-scenes stuff is really cool. This might not have been everyone’s favorite Halloween but I had a fun time with it and am glad to have it in the collection Recommended.