While paying homage to John Carpenter's 1978 seminal classic, David Gordon Green's Halloween successfully reignites a renewed interest to the horror franchise, picking up forty years later from the original and featuring an outstanding performance by Jamie Lee Curtis. Evil returns home on Ultra HD with an excellent 4K HDR10 presentation, a satisfying DTS:X soundtrack, but a rather lackluster set of supplements. Nevertheless, the overall package is Recommended as a great addition to the horror UHD library.

Not only is David Gordon Green's Halloween arguably the biggest surprise of the year, but it is further evidence that the two Rob Zombie remakes are complete, utter trash and should rightly be forgotten along with Rick Rosenthal's equally abysmal Resurrection, which starred the now-irrelevant Buster Rhymes. From a script Green co-wrote with Danny McBride (Pineapple Express, Alien: Covenant), there are times when the story almost seems to take very subtle, tongue-in-cheek jabs at Zombie's efforts, along with all seven sequels which preceded it. In fact, the scene with a pair of true-crime podcasters (Jefferson Hall and Rhian Rees) interviewing Laurie Strode (reigning "Scream Queen" Jamie Lee Curtis reprising the role that launched her career) practically serves no other purpose than to remind hardened, devoted fans of John Carpenter's 1978 horror original of where Zombie went wrong in his attempt to reimagine the dearly-beloved seminal classic.

While also serving as an exercise in how to properly make a sequel, Laurie — and the entire production as a whole, to be perfectly honest — makes it abundantly clear there is nothing to understand about Michael Myers (James Jude Courtney), the masked maniac who committed a murder spree in Haddonfield forty years earlier on Halloween night. This brings up an interesting point of why Carpenter's film continues to deliver the scares while the sequels and Zombie's take fail to live up to the original. A good horror movie should incite fear and suspense, and the best kind of fear is a fear of the unknown and the strange. What makes Michael a terrifying presence is the lack of motive, and the best even his psychiatrist Dr. Sartain (Haluk Bilginer), much like his predecessor Dr. Loomis (Donald Pleasance), can do to explain the killer's rationale is to simply call him evil incarnate. To psychoanalyze or give him a supernatural cause is to ruin everything that makes Michael Myers scary. 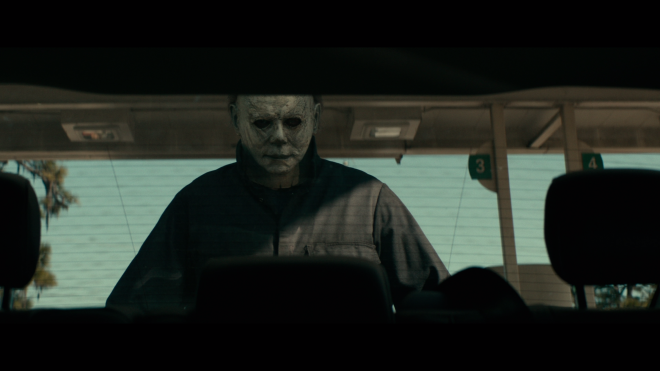 Essentially, Green and McBride not only set out to make a worthy sequel but to retcon the narrative of the entire franchise, to remove the mythology established by three decades of sequels and return the series back to basics. In picking up forty years later to the day when Michael first terrorized the town of Haddonfield, the filmmakers also refocus our attention on Laurie, who, now suffering from PTSD, is still haunted by that night and continues to live in perpetual fear of Michael's return. The real beauty of this is seeing her as a fighter, a woman refusing to be a victim or allowing her condition to weaken her will, and Curtis is absolutely fantastic as this resourceful, steadfast and very well-prepared Laurie. When Michael inevitably and predictably escapes, threatening the lives of Laurie's daughter and granddaughter (Judy Greer and Andi Matichak), the film suddenly shifts into a quasi-western where our heroine decides to confront and hunt the monster rather than run away.

Green's Halloween isn't just another movie following in the recent trend of reboots or another entry to a tired, long-in-the-tooth franchise. By being a direct follow-up to Carpenter's original, the film is a revision of the whole series, a do-over that completely ignores the events of previous sequels. And somehow, it miraculously works. Granted, the Dr. Sartain subplot is questionable and frankly, takes away from the excellently paced apprehension. But as a whole, Green generates suspense and methodically builds the tension to a well-earned showdown between two horror icons while also sprinkling the story with subtle allusions honoring the movie that kickstarted the slasher craze of the 80s. Hearing the franchise's signature music playing in the background once again, which included the involvement of Carpenter, is enough to make loyal fans giddy with excitement, but the plot about a past trauma affecting three generations of women is what ultimately elevates this installment, successfully reigniting a renewed interest in the franchise.

Universal Studios Home Entertainment brings Halloween to 4K Ultra HD Blu-ray as a two-disc combo pack with a Digital Copy code. When redeeming said code via Universal's website or Movies Anywhere, users have access to the 4K HDR10 version with Dolby Digital Plus 5.1 audio. The dual-layered UHD66 disc sits comfortably opposite a Region Free, BD50 disc inside a black, eco-elite case with a lightly-embossed slipcover. At startup, the disc goes straight to a static screen with the usual options along the left side and music.

Laurie protects her homestead from an evil shape while packing a chillingly excellent HEVC H.265 encode, showing a few welcomed improvements but overall looking comparable to its Blu-ray peer. Shot entirely on the Arri Alexa camera system, capable of up to 3K resolution, the upscaled transfer trots into town with slightly sharper detailing along various buildings and around Laurie's weathered home. We can better make out every nook and cranny of the houses, and the surrounding foliage is tiny bit more discrete. In fact, there's a bit more clarity of random objects decorating the background, and individual leaves and hairs are a tad more distinct. Faces are highly revealing, exposing every pore, wrinkle and the tiniest negligible blemish, and the iconic mask comes with better lifelike texture. However, there is the occasional instance of softness and some very mild aliasing along the sharpest edges.

On the other hand, such moments are overlooked for the improved brightness levels, showering the 2.39:1 image with inkier, obsidian blacks, providing distinct gradational differences in the various shades. Given most of the movie takes place at night and during poorly-lit interiors, the action comes with strong visibility within the darker, silkier shadows, which is greatly appreciated during the final climactic battle. The 4K video also displays slightly better and stronger contrast, giving Michael Simmonds's photography an energetic pop with crisper whites, but the jump isn't as terribly significant as some of the best recent releases or compared to the HD version. The upgrade doesn't really improve specular highlights dramatically, as detailing within the brightest areas remain about the same. Then again, the hottest, most intense spots are admittedly a tad tighter and narrower while providing metallic objects and surfaces a realistic gloss and polish.

Faithful to the filmmakers' stylized cinematography, the color selection is somewhat limited and slightly restrained, placing more emphasis on yellow, earthy tones, which really come to life in the climactic clash at Laurie's house. Browns are particularly diverse, ranging from tawny caramels and coffee mocha to sandy granola tans, and the yellow of various lamps bathe rooms with a warm dandelion glow. The orange and teal look is more apparent and dynamic in this HDR10 presentation versus its HD SDR counterpart, making blues and cyans burst with energy, especially around the siren lights of police cars. Speaking of, the picture boasts some very striking candy rose reds in those same lights while blood has a deeper, crimson scarlet, but greens seem pretty moderate and average. Meanwhile, facial complexions come with a more natural, healthier rosiness. (Video Rating: 82/100)

Our traumatized heroine faces her fate outfitted with an excellent DTS:X soundtrack that brings the terror home, despite not comparing as strongly or aggressively as some of the best object-based options currently available.

Nevertheless, the extra breathing room delivers rich detailing and clarity, filling the entire soundstage with warmth and fidelity and generating a wonderfully engaging image with precise, well-prioritized vocals. Without a doubt, the design's greatest and most thrilling aspect is the franchise's memorable score, which lightly bleeds into the front heights for a wholly satisfying and highly-engaging half-dome wall of sound while exhibiting crisp, sharp dynamics and acoustics with superb precision in the instrumentation. Imaging continuously feels broad and expansive as a variety of noises in the background fluidly and effortlessly pan across the fronts and top heights, creating an outstanding sense of presence and space. On the whole, there isn't much else going on in the overheads except for a few very light and subtle atmospherics that nicely travel above the listening area. Overall, the surrounds do most of the work, generating an amusingly enveloping soundfield that draws viewers into the terrifying rematch against The Shape. The low-end could perhaps be a bit more imposing, but it can be fairly commanding at times with a hearty, responsive oomph when action erupts on screen. (Audio Rating: 84/100)

The same set of supplements can be enjoyed on both the UHD and the accompanying BD.

David Gordon Green's Halloween successfully reignites a renewed interest in a tired franchise by not only returning the series back to its roots but also retconning the mythos surrounding the iconic killing machine, Michael Myers. With Jamie Lee Curtis reprising the role that launched her career, the plot also breathes new life to the Laurie Strode character as a survivalist still battling the trauma of Halloween night forty years ago while paying homage to John Carpenter's 1978 seminal classic. Evil returns home on Ultra HD with an excellent 4K HDR10 presentation that offers a few noteworthy improvements over the Blu-ray while featuring the same satisfying DTS:X soundtrack. Despite the lackluster set of supplements, the overall package is nonetheless recommended for fans who can proudly place it alongside the many editions of the original.

Sale Price 16.89
List Price 29.98
Buy Now
3rd Party 6.08
In Stock.
See what people are saying about this story or others
See Comments in Forum
Previous Next
Pre-Orders
Tomorrow's latest releases