Daniel Craig's tenure as the legendary MI6 agent James Bond concludes with unexpectedly poignant results in No Time to Die, the twenty-fifth installment in the long-running 007 series. Unlike previous entries that date back to Sean Connery as the infamously suave and devilishly sophisticated superspy, Craig's Bond, which opened with Martin Campbell's Casino Royale, is a man of the twenty-first century. Connery's version was a confident, smooth-tongue womanizer with an undoubtedly debonair charm who rarely showed remorse or any misgivings, and little changed over the course of four decades except for the actor simply playing another variant of this familiar archetype. Craig's iteration, however, is an austere, hardened hero who is emotionally and physically vulnerable, a man held accountable for his actions while carrying the traumatic weight of his decisions when they go wrong but struggles to keep them at bay.

Since then, this grittier, edgier and more realistic take on the character — at least, in comparison to its goofier campy predecessors — has also been on a five-film story arc culminating in a tale that's largely satisfying yet somewhat wanting. Director Cary Joji Fukunaga, who cowrote the script with three others, raises the emotional stakes for Bond and love-interest Madeleine Swann (Léa Seydoux) while still keeping in line with the sort of visual spectacle expected of the franchise. The explosive action is met with as much tense drama in equal measure, making for surprisingly moving espionage thriller that is thoroughly enjoyable with a well-earned conclusion to both the film itself and Bond's overarching journey. Only issue is the rather lackluster villian Safin (Rami Malek), a terrorist leader who frankly, fails to pose much of a threat outside of his fixated vengeance, convenient ability to battle Spectre and resources to create a bioweapon.

Nevertheless, No Time to Die is a fittingly satisfying close to Daniel Craig's performance as James Bond, which should rank as iconic and memorable as Connery's original portrayal.

For a different take on the film, check out Bryan Kluger's theatrical review HERE. 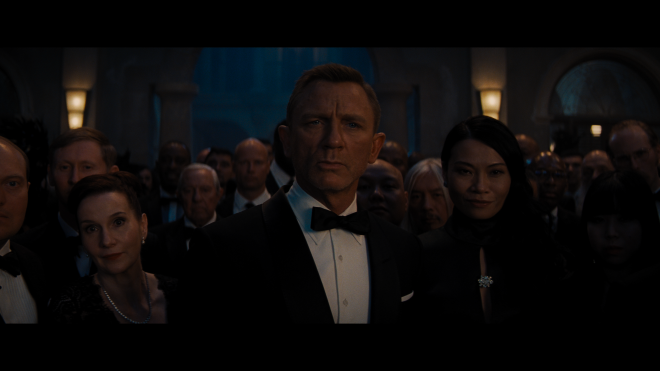 Vital Disc Stats: The Ultra HD Blu-ray
Universal Studios Home Entertainment brings No Time to Die to 4K Ultra HD Blu-ray as a two-disc combo pack with a Digital Copy code. When redeeming said code via Apple iTunes, owners are granted access to the 4K UHD edition, presumably in Dolby Vision and Dolby Atmos audio. The triple-layered UHD100 disc sits comfortably opposite a Region Free, BD50 disc inside a black, eco-elite case with a glossy, lightly-embossed slipcover. At startup, the disc goes straight to a static image screen with music playing in the background, menu options along the bottom and easy access to the special features along the right side of the screen.

Daniel Craig's final run as 007 explodes on Ultra HD thanks to a gorgeous, massively banging HEVC H.265 encode that was struck from a combination of traditional 35mm, 65mm and IMAX cameras, which were later mastered to a 4K digital intermediate. From the opening moments in southern Italy, the 2160p video immediately impresses with razor-sharp details of the town's unique stone architecture, exposing the tiny pockmarks, cracks, crevices and imperfections of the roads, walls and bridges. A pitch-perfect contrast balance allows for superb visibility in the far distance where we can plainly make out the individual leaves of trees and the clearly defined outlines of other buildings and mountain peaks. With crisp, spot-on specular highlights to boot, the bright edges of clouds radiate intensely, metallic surfaces shine with a realistic sheen, the hottest spots like the various light fixtures maintain excellent definition and explosions have a dramatic pop without engulfing the finer details.

The native 4K transfer continues dazzling the screen with on-target, accurate brightness levels from start to finish, bathing the 2.39:1 image in luxuriously rich, midnight blacks and supplying the action with a beautiful cinematic appeal. Shadow delineation is equally outstanding where every nook and cranny within the darkest corners remain visible while penetrating deep into the screen to add an attractive three-dimensional quality throughout. The Dolby Vision HDR presentation really makes the orange-teal cinematography pop while showering the visuals in a lush, sumptuous array of animated reds and energetic greens. The overall palette favors lots of earthy golden yellows and vibrant fiery oranges lighting the background while sepia tans, cyans and greenish blues light much of the foreground, all of which are quite dynamic and lively. But in sequences with Safin, it all shifts significantly to a variety of cooler arctic blues and other soft cerulean tones. All the while, facial complexions appear healthy to their respective climates with revealing, lifelike textures and natural peachy-red hues in the entire cast.

Coming in as perhaps the best home theater soundtrack of the year, Craig's swansong lands with a stupendously awesome Dolby Atmos audio track that boasts one demo-worthy moment after another.

Right from the start, the surrounds immediately come alive with Hans Zimmer's score filling the room and lightly bleeding into the top heights, creating a highly-engaging half-dome wall of sound that's impressively sustained to the very end. Quieter, character-driven sequences are layered with the commotion of people chattering from all around while the noise of the local wildlife and the wind blowing through the trees can be heard in distance and from above. Other dialogue-heavy scenes taking place indoors even have a natural light echoing effect from the characters talking to each other.

Of course, the action-packed sequences suddenly erupt with gunfire whizzing from every direction, helicopters flawlessly panning overhead, vehicles zooming everywhere and debris convincingly raining down directly above the listening area. The best demo moment easily goes to the sequence in Norway when Bond and Madeleine find shelter in the forest, and the atmospherics from the environment and Safin's crew still giving chase are absolutely breathtaking, generating a realistic hemispheric soundfield that'll have owners repeating the scene over and over again just to enjoy the immersive quality of it all.

Meanwhile, imaging continuously feels broad and spacious, exhibiting an outstanding mid-range while maintaining superb detailing and definition in the upper frequencies during the loudest segments. Zimmer's score also benefits, delivering distinct clarity in the orchestration full of warmth and impressive fidelity. The dialogue is always precise and clean above the commotion so that listeners can enjoy every emotional moment in Craig's final outing. The low-end could arguably be a tad stronger, but that is really a matter of personal preference. In truth, the punchy bass has a wonderfully full-bodied response with an abundance of weight and heft to provide the visuals and music with an impactful presence. (Dolby Atmos Audio Rating: 100/100)

This UHD edition of the movie shares the same set of supplements as the accompanying Blu-ray disc, but it also includes one lone exclusive focused on Daniel Craig's tenure as Bond.

Daniel Craig's tenure as the legendary MI6 agent James Bond comes to a close in Cary Joji Fukunaga's No Time to Die, an unexpectedly but well-earned poignant conclusion to this modernized iteration of the iconic character. Although Rami Malek's terrorist leader Safin could have been a stronger, more threatening adversary for Craig's final outing, the twenty-fifth entry in the long-running 007 franchise is nonetheless a satisfying end and culmination. Craig's swansong lands on 4K Ultra HD with a gorgeously striking Dolby Vision HDR presentation and a stunning reference-quality Dolby Atmos soundtrack, but the bonus features are disappointingly small for such a big-name title. Nevertheless, the overall UHD package makes a Highly Recommended addition to the 4K library, sure to be this year's top demo disc.