Gary Oldman is the gentleman spy on the hunt for a mole in Tomas Alfredson’s adaptation of John le Carré’s Tinker Tailor Soldier Spy. After ten years, this classy spy film about the dark days of the Cold War is just as suspenseful as the day it hit theaters and given recent events surprisingly current. Kino Lorber Studio Classics delivers an impressive 4K Ultra HD Blu-ray upgrade offering a stunning Dolby Vision HDR transfer, the same excellent audio mix, and archival bonus features. If you’re fans of the twisted web of spycraft and slow-burn suspense, this is one hell of a great film. Highly Recommended.

"Densely intricate, Tinker Tailor Soldier Spy is a highly sophisticated game of chess that's as challenging as it is demanding of its audience. Populated by some rather dubious gentlemen in the profession of deception, the sport requires the utmost skill, the proficiency for reading into the smallest details, and the talent for drawing in one's opponent. When lives and the security of your nation are at stake, this is a deadly game you don't want to leave in the hands of chance.

The same could be said of the film itself, where the slightest mistake or blunder on the part of the filmmakers could have been the production's ruin. Were it not for the expertise of Tomas Alfredson and his crew, this darkly intense espionage thriller would easily collapse under the weight of its labyrinthine plot. Thankfully, 'Tinker Tailor' is an absolutely brilliant display of drama, mystery, and suspense, one which regards its audience with intelligence. Like his twisted vampire romance Let the Right One In, Alfredson shows complete control of the camera, with an awareness of viewer expectations. Although we can pretty much guess the identity of the double agent halfway into the film, we're continuously made to second guess ourselves. The real enjoyment is in watching the characters uncover the clues and figure the right moves for winning the match.

With gritty, disquieting photography by Hoyte van Hoytema, the Swedish director generates nerve-wracking tension out of silence and some of the most seemingly-benign conversations. As George Smiley (Gary Oldman) confronts Toby Esterhase (David Dencik) about his loyalty to the Circus, the name used when referring to MI6, a plane lands in the distance and quickly approaches towards them while their exchange grows more uneasy. While checking the logbooks for a message sent that possibly names the mole hidden within the upper ranks of British intelligence, Peter Guillam (Benedict Cumberbatch) is pulled aside and asked about Ricki Tarr (Tom Hardy), a missing agent believed to have defected. In the enclosed room with hideously orange, soundproof pads on the wall, the air thickens with apprehension as Alleline (Toby Jones), Roy Bland (Ciarán Hinds), and Bill Haydon (Colin Firth) question and stare at Guillam. It is scenes such as these and many more, while on the hunt for a mole, which makes for a satisfyingly tense, almost Hitchcockian motion picture." 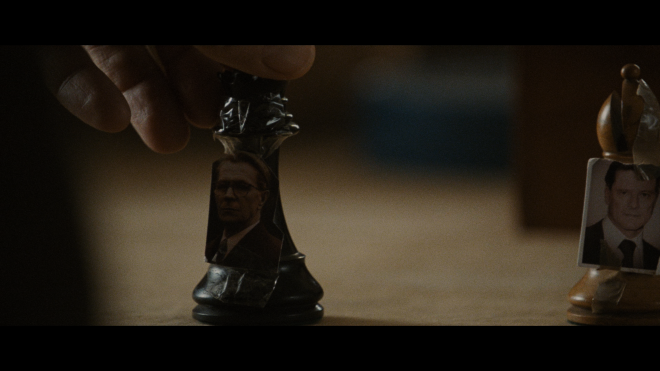 For my take, it doesn’t get better than Tinker Tailor Soldier Spy - at least in feature film form. This is the kind of film that when I saw it in theaters I was literally sitting with my elbows on my knees leaning into the screen absorbing every little detail. John le Carré’s novel is a labyrinth of twists, turns, and red herrings as simple mild-mannered men live on the front lines of the Cold War. The original 1979 miniseries is the best overall adaptation of the book - but that’s because it gets nearly five hours to do its job. I’m amazed that Tomas Alfredson managed to pull this story together in two hours and have it not only be coherent but also impressively faithful to the novel.

And what a novel it is. Truth be told, it took me three tries to read. The book and subsequently the film are intentionally disorientating. For those who come away from this film completely confused as to what the hell is going on, that’s by design. It’s a story about truth and lies, accuracy, and misinformation. Often within a lie is the truth so you have to suss out what’s actually happening from the lie someone may be telling our surrogate gentleman spy George Smiley (Gary Oldman). This is the sort of film that's best enjoyed if you're an active participant rather than letting things wash over you. 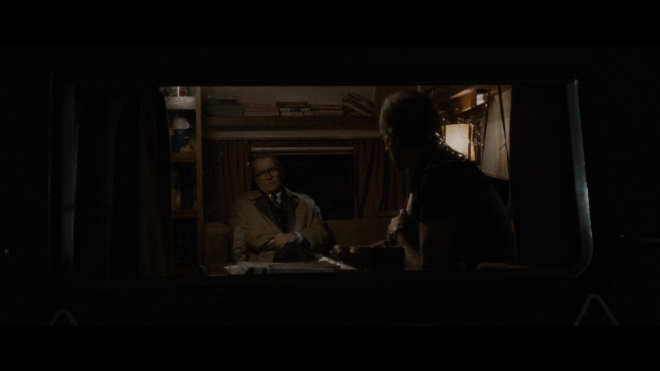 Thankfully, this film actually simplifies things greatly without losing the flavor making the overall story far easier to follow. And if you’re at all confused - much like reading the book - if you’re really paying attention the answer to the mystery is right there in front of you. I won’t give away the clues, but watch everything in any given scene. How a character sits, an object on a table, not only what someone says but how they say it are all clues. Even when the film jumps back and forth in time, there’s a good reason that reveals more and more about the identity of the mole. For those that had a tough time watching through, give it another spin. This is one of the few movies that for me gets better with every viewing and I'm always ready to dive back into it again. 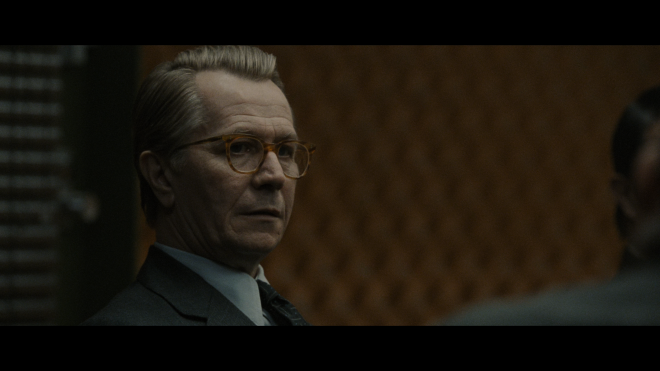 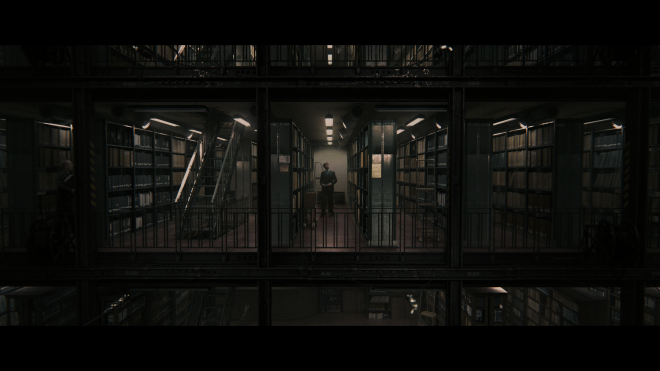 With a new native 4K Dolby Vision HDR (and HDR10) transfer supervised and approved by director Thomas Alfredson, an already great-looking film now looks even better. To be upfront, this was always a dark, drab, and overall dour-looking film. It was intentionally shot with more pronounced film grain, darker yellow/brown and gray color tones, with relatively few appearances of primaries or otherwise bright and cheery lighting. So don’t go expecting the brightest, most colorful film ever released on 4K! This is a movie where the characters live in the shadows and this new transfer perfectly captures that mindset. Comparing the 2012 Universal Blu-ray and this new disc, improvements in color nuances, contrast, shadows, and details are immediately apparent. Fine details are impressive; clothing textures with the intricate production design perfectly recapture that organic look and feel of gritty 70s espionage thrillers. 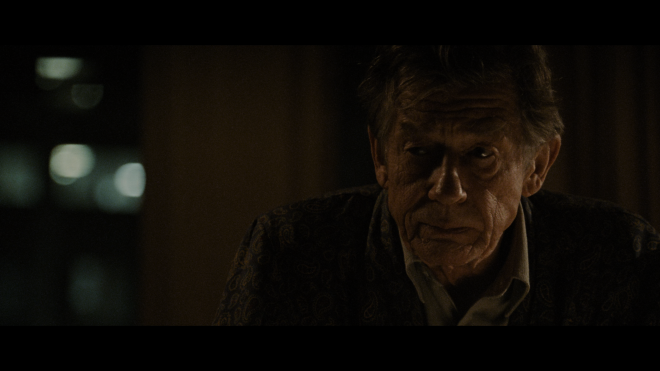 For the reasons listed above, the Dolby Vision HDR pass is terrific stuff. One thing that always bugged me about the previous Blu-ray was the prevailing orange push for most scenes. That color timing has been scaled back with a more natural appearance while maintaining the overall dark brown/yellow tones. The overall appearance of the film is also a couple of stops darker, which for me is appealing because it heightens black levels and shadows and actually gives the image a more pronounced sense of depth and dimension. The few flourishes of red/blue/yellow primaries come to life nicely but don't expect a lot of heightened "pop". The best improvements I saw for this release were the better contrast and black levels. Whites are crisp and clean without blooming and shadows are richer, deeper, with a more nuanced light and color gradience. The scene where Smiley tells Guillam about meeting Karla (Oldman’s Oscar-nomination clip) is a highlight example of what this new transfer brings to the screen over the 2012 disc. 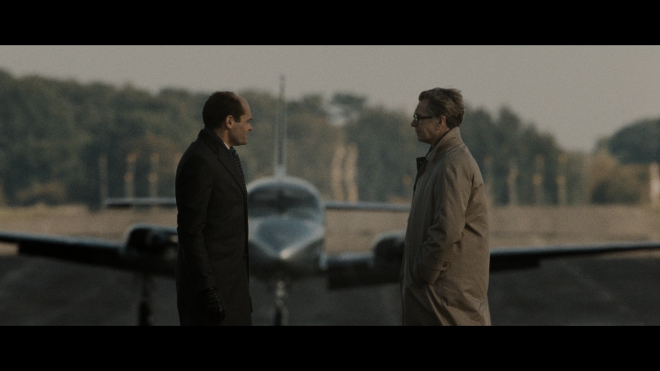 While this release may have a new video transfer, the audio package comes with what sounds to be the same excellent DTS-HD MA 5.1 audio mix. Now some may get testy about the lack of an Atmos track, I’d rest on the side that this isn’t a film that needs one. This track is already fantastic to the end that additional height channels wouldn't likely offer much if any benefit beyond more space and atmosphere to an already spacious and atmospheric track. Dialog is clean and clear throughout - it’s a relatively soft and somber-sounding film from the get-go without a lot of dynamic action effects or bombastic scoring to counter with. For that aspect levels are spot on without the need to ride the volume. Surround effects are impressive giving rise to some effective imaging. A scene where someone is listening to a phone recording is a terrific example of this track’s subtleties where one voice is in the left side channel and the other in the right side channel with notetaking scribble sounds in the center. The whole film plays like that with key effects and ambients getting moments to shine but nothing ever sounds overworked or played up. Again it’s a great mix and I can’t honestly imagine anything better than this. 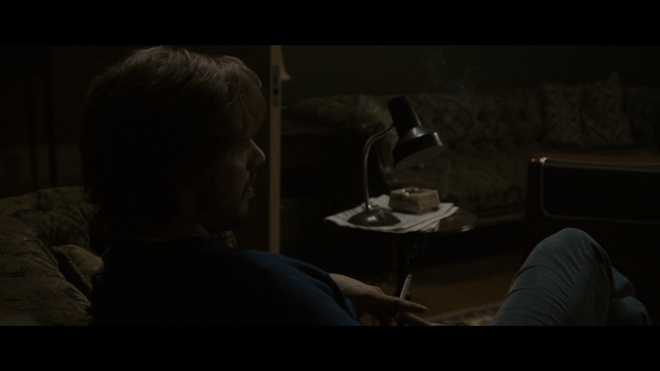 This disc also comes with a DTS-HD MA 2.0 track that’s also pretty good and would play well for folks without a full surround setup, but if you have to choose stick with the 5.1. It’s the clear true winner of the field. 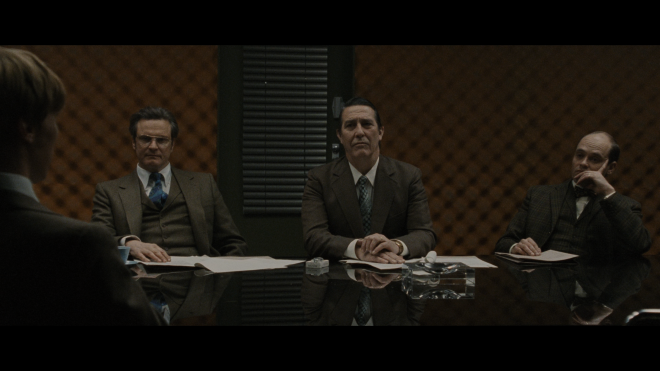 From the looks of everything, all of the previous 2012 bonus features have been brought back for this release. The audio commentary is a great listen if you haven’t picked through that already. All of the materials here are informative and worth the time but by the same concession, I've enjoyed that KLSC usually will add a new feature or a new audio commentary from a film historian and it's a shame we're not getting anything new here. 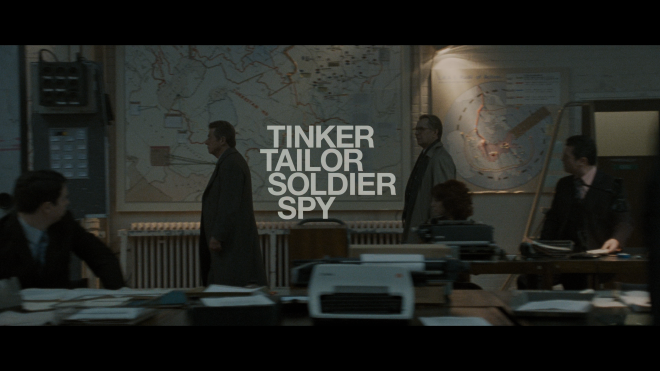 Tinker Tailor Soldier Spy is a masterclass in film craftsmanship. Intricately detailed and plotted, the film perfectly captures John le Carré’s source novel in a tight and tense thriller. Gary Oldman turns in a genuinely Oscar-worthy performance as George Smiley. It was reported a couple of years ago Oldman would be returning as Smiley for a new mini-series, but that has yet to materialize which is a genuine shame because he takes the character and makes it his own standing apart from Alec Guinness' own amazing work with the character. A pitch-perfect pot-boiler, I can’t get enough of this one.

Thanks to Kino Lorber Studio Classics, Tinker Tailor Soldier Spy comes in from the cold with a splendid 4K Ultra HD Blu-ray release. Sourced from a new restoration, this native 4K Dolby Vision transfer is immaculate. The 5.1 mix is the same as the previous disc and it still works perfectly. Bonus features are all carried over from the previous release. While this film might not be for everyone, I loved it and honestly can’t wait to watch it again. Highly Recommended.