Meir Zarchi’s rape/revenge exploitation classic I Spit On Your Grave is just as visceral and horrifying as it was when it hit theaters. Now 43 years later, Ronin Flix upgrades their already incredible Collector's Edition restoration with a native 4K HDR10/HDR10+ transfer. The same audio tracks, feature-length documentary, and all of the primary bonus features of the Collectors Edition have been brought over for this release. If you have that set, you’ll need to ask how necessary it is to have in full 4K. If you don’t have this brutal classic in your horror collection - it’s easy to call Highly Recommended.

According to their website, if you pre-order before the street date, Ronin Flix will take $15 off the price.

Well, it’s been a year so I guess that means it’s time to take another look at Meir Zarchi’s exploitation horror classic I Spit On Your Grave aka Day of the Woman. To be clear - as much as I will stick this film on a shelf as praiseworthy, it’s not a favorite nor is it one I watch on anything close to a regular basis. I think prior to my previous review it’d been the better end of 12 years since I last watched it and that was in a film school screening room ahead of a lecture/debate. This isn’t a movie I can just put on at home, let alone with a wife and a kid in another room somewhere. I Spit On Your Grave is one of those visceral gutting movies that I gladly skip about 15 minutes of because I simply can’t experience that sequence again. 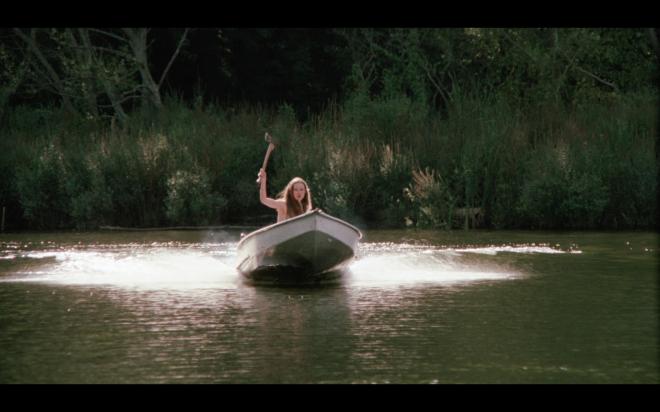 However, as I said in my previous review - I am more than willing and ready to watch and enjoy what happens after that horrifying quarter-hour. Which is exactly what I did again. That stretch of more-than-justified violence is pure exploitation cinema at its finest. The Rape/Revenge sub-genre within a sub-genre is a tricky one to pull off right. All you need to do is watch this film and then take a look at the trashy remake that did it all wrong. This is a case of the ends actually justifying the means. After enduring that horrible stretch - the audience almost needs the feeling of joy from watching Camille Keaton exact her revenge.

For a longer, and much more in-depth take with special guest comments - read my review of Ronin Flix's I Spit On Your Grave Collector’s Edition

Vital Disc Stats: The 4K Ultra HD Blu-ray
Ronin Flix jumps into the 4K Ultra HD Blu-ray game with a heavy hitter of a format release - I Spit On Your Grave in a deluxe three-disc 4K Ultra HD Blu-ray + Blu-ray set. You get the film in 4K Ultra HD Blu-ray, 1080p, with the feature-length documentary Growing Up With I Spit On Your Grave on Disc Three. All three discs are housed in a standard sturdy three-disc black keep case with identical glossy slipcover with the classic Demi Moore poster artwork. Disc One (4K) and Disc Two (1080p) load to identical animated main menus - so be careful which one you’ve pulled out of the case. It’s easy to do since the image on all three discs is exactly the same, so look for the 4K and HDR logos.

Note: As of publication we haven’t been able to pull images directly from the 4K disc, these images are from the include 1080p disc. When we can we’ll update the images and hopefully include a demo video. 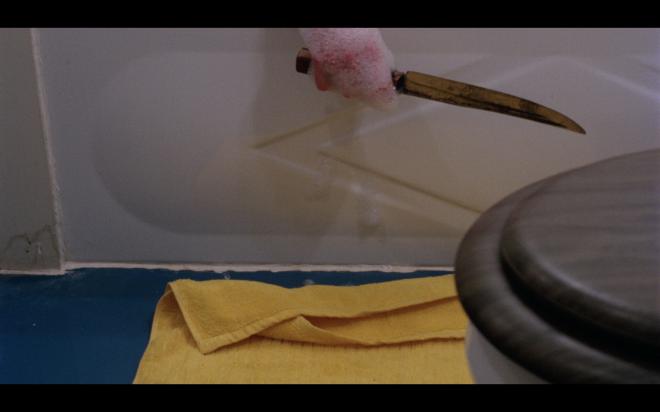 I said early on in my review of the Collector’s Edition that the only way I Spit On Your Grave could possibly look better was on 4K Ultra HD Blu-ray with HDR, and I was right. The previous 1080p Blu-ray is no slouch. It’s still one of the best transfers I’ve seen - especially for a film of that vintage and low-budget production values. When you’re digging into the apples/oranges comparisons between formats, the enhancements and improvements are marginal but still notable. The 1080p disc held steady at a bitrate of 35mbps and that’s the low-end with this 4K disc with peaks regularly hitting above 65mbps. The extra bitrate is most felt with image depth and refined details for closeups. Differences in wide shots and some medium shots are imperceptible on that end of the scale. In close-ups I felt like I was seeing Camille Keaton’s cheek scar clearer, makeup effects are better defined as are clothing textures. Film grain was already in amazing shape and it takes on an even more organic and natural film-like appearance here.

HDR10+ and HDR10 do what they’re supposed to do when smartly applied. Colors, black levels, and whites show the most gains over the 1080p disc. This isn’t to say that colors are blown out and oversaturated, nor is the image darker nor is it over-brightened. It's enhanced in all the right ways. This film was already in amazing shape after the past release so the HDR grading offers subtle nuanced improvements. Skin tones are a little pinker, a little more natural-looking - but not a dramatic shift. I felt like I was seeing the tan lines around Keaton’s eyes from her sunglasses much more clearly as well as other facial features in the cast. The red of Keaton's lipstick has much more pop - as do the many blood effects. Greenery takes on a more lush shade and is not quite such a bright green. Black levels are again that desired deep inky black shade we like to see but shadows now pick up some extra gradience. A key scene by the fireplace is a great example of the lighting and shading improvements.

It was a small sticking point in the previous release, but the scene where Johnny and his pals are fishing and deciding what they intend to do picks up some improvements. It’s still a little rough around the edges, but the grain structure is a little cleaner without appearing scrubbed. Edges are more clearly defined and there isn’t as much crush to contend with and colors have a little more natural pop to them. Fine details come through a little more clearly as well. Apples to oranges, this isn’t a huge night and day difference, but with the little refinements in details, colors, and image depth - it’s enough to say that this 4K release offers clear improvements over an already near picture-perfect transfer. 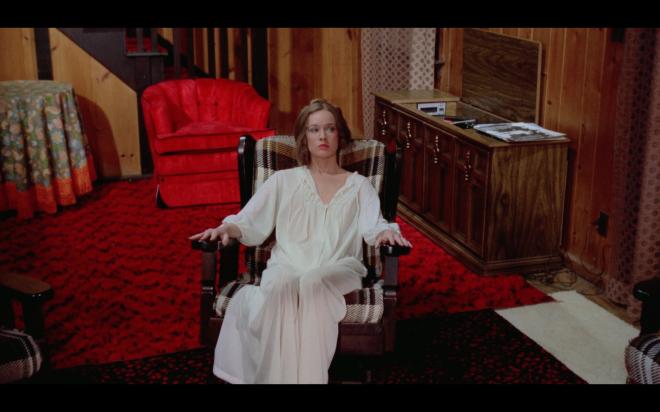 And again, this release of I Spit On Your Grave comes with the exact same three audio options to choose from - DTS-HD MA 2.0 Dual Mono, DTS-HD MA 2.0 Stereo, and a DTS-HD MA 5.1 mix. Refer to the linked review above for all the gory details there. 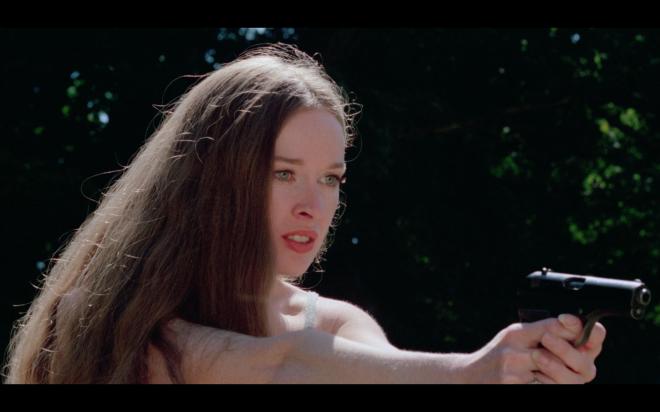 No new bonus features have been assembled for this release. Everything that’s here was on the previous set. The artwork indicates “New Location Featurette” but that’s the same one. Technically it’s the “newest” bonus feature of the bunch.

Growing Up with I Spit On Your Grave 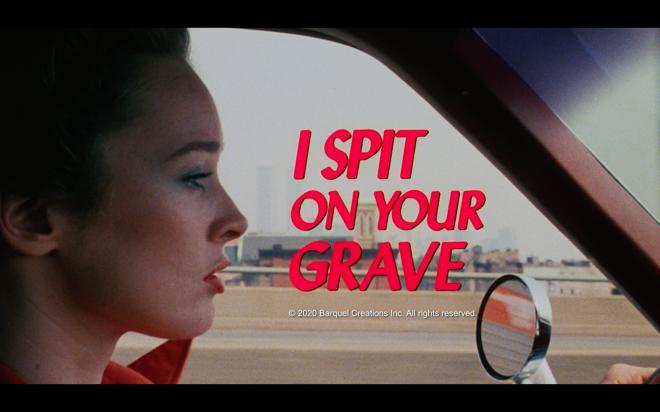 Barring a resurgence in home 3-D, it’s not likely I Spit On Your Grave will see another new-and-improved disc release anytime soon or ever. Not that it needs one now. Between their exceptional Collector’s Edition and now this 4K Ultra HD Blu-ray, the team at Ronin Flix has given Meir Zarchi’s exploitation classic the very best home video has to offer. I say this with all appreciation of the film but I hope I don’t have to review it again in a year! Twice inside a decade is enough.

With a full native 4K Ultra HD Blu-ray with HDR10+/HDR10 grading, the already amazing transfer of the past Blu-ray picks up some subtle but notable improvements to make this the defining transfer. Is it enough of an improvement to upgrade again? That will depend entirely on how badly you need this one in your 4K collection. If you didn’t already pick up the Collector's Edition set and feel you need to own this one, this is a no-brainer. Even if you’re not 4K ready but plan to upgrade your gear, you’re getting the excellent 4K and 1080p discs along with the documentary disc. Highly Recommended

According to their website, if you pre-order before the street date, Ronin Flix will take $15 off the price.