The worst of the worst gets the best of the best with The Suicide Squad on 4K Ultra HD Blu-ray. Writer/Director James gun jumps comic universes to serve up this hilariously hyperviolent quasi-franchise reboot starring Idris Elba, Margot Robbie, John Cena, and Viola Davis. The film is a big deviation from its predecessor with a markedly more violent sense of humor that can stretch thin in places but deliver a satisfyingly entertaining show. The 4K Ultra HD Blu-ray offers an exceptional HDR10/HDR10+/Dolby Vision transfer with Atmos audio and a nice assortment of interesting bonus features. Highly Recommended

They are the worst of the worst so they’re held in the worst of the worst - Belle Reve Prison. A Maximum Security facility, it’s also the personal recruitment playground of Amanda Waller (Viola Davis). When a dirty job needs doing, she assembles a team of inmates. Complete the mission, get ten years knocked off their sentence. If they die, that’s just as well. After the bloody coup in a Central American nation, Waller needs Bloodsport (Idris Elba), King Shark (voice of Sylvester Stallone), Ratcatcher 2 (Daniela Malchoir), The Peacemaker (John Cena), and Polka-dot Man (David Dastmalchian) to invade the island nation to stop a secret government experiment of extra-terrestrial origin. Whether they live or die - that doesn’t really matter. They’re the Suicide Squad. They’re supposed to die.

Given recent releases and promotions at the latest Fandome event, it’s pretty clear to see that the DCEU such as it exists is still sort of figuring itself out. While Zack Snyder’s Justice League was a massive success for HBO Max and on physical media - Warner Bros. hasn’t exactly jumped back into that universe whole hog. They seem to be content to just sort of letting each new film call back to the so-called SnyderVerse while doing its own thing. While a huge success financially; critically and creatively David Ayer's butchered Suicide Squad was a bust. James Gunn’s quasi-reboot-sequel The Suicide Squad is a perfect example of the studio trying to more or less forget a past failure but keep an IP active and alive with a new spin. 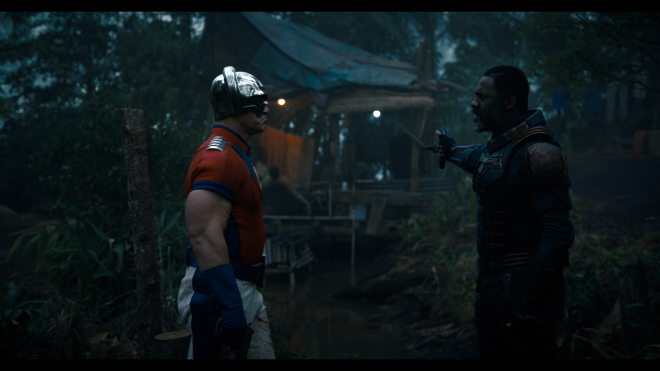 I personally enjoyed the hell out of The Suicide Squad. It’s James Gunn fully unleashed. Take all of the humor and charm of Guardians of the Galaxy and give it that sly edgy violent charm of Gunn’s early works and you have yourself a franchise relaunch. As much as I enjoyed it,  I can also see why some folks were put off this one. You can actually have too much of a good thing. After the hilarious blood-soaked opening, a lot of the hyper-violent humor strains to locate the punchline. The audience just becomes numb to it as the shock value of the humor wears off.

Some side bits drag far too long, some scenes could be cut entirely and not be missed - that second act isn’t as smooth as it could have been. As clunky as it is, Gunn and his cast are clearly having fun and it shows he didn’t have to endure the creative nightmare of his predecessor David Ayer. You now have an idea of what an R-Rated Guardians of the Galaxy movie could theoretically look like - but that would never happen. Thankfully the film finds its path again for a rousing third act and a terrific conclusion. If you didn’t know already, be sure to stick through the post-credits because one character is getting their own limited series on HBO Max slated for January! 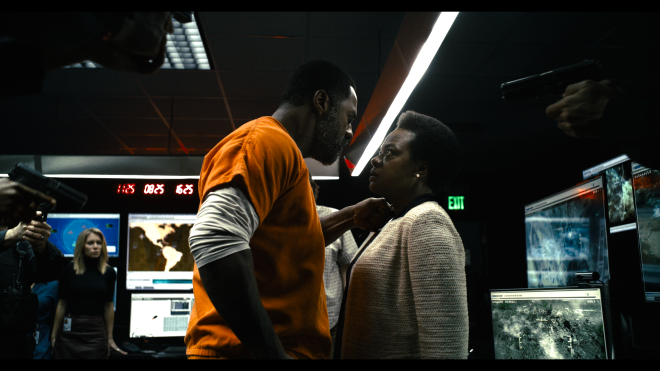 For another take, give our Theatrical Review a read 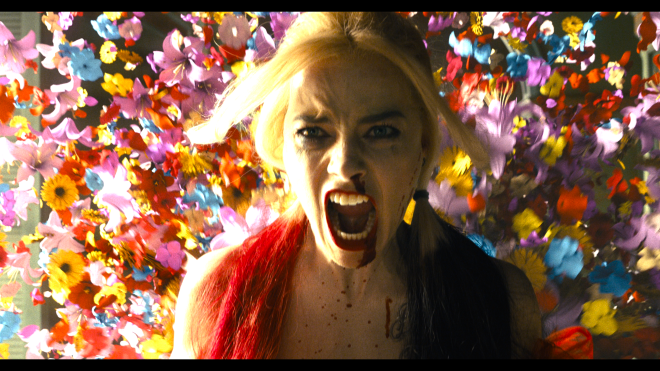 Shot digitally at 6K and 8K and finished on a 4K Digital Intermediate - The Suicide Squad enjoys one of the very best 4K transfers of the year. This 2160p 1.90:1 Dolby Vision/HDR10+/HDR10 transfer offers up a stunningly detailed image allowing you to examine virtually every nook and cranny of your screen for the smallest little details. This image demands a huge screen. From facial hair to costume details to the little diodes sticking out of Peter Capaldi’s Head - it’s all on-screen. I saw this opening day on IMAX in a near-empty theater and this image has that sort of massive feel to it. This is a disc where I look at my current setup and wish I had the means to go full projector and get that big wall-to-wall experience.

With Dolby Vision HDR (and by extension I’m sure it’s just as impressive with HDR10+), the image looks even better. My second time through was on HBO Max and I thought it looked pretty good there, but that streaming experience doesn’t hold a candle to what this disc has to offer. Colors are bright and bold with natural crimson reds, vivid royal blues, and nice warm welcoming yellows. Polka-Dot Man’s “rash” is a notable highlight in that area giving you all of the colors without appearing blown-out or overly darkened. You’re getting a lot of hues and variations in the spectrum. 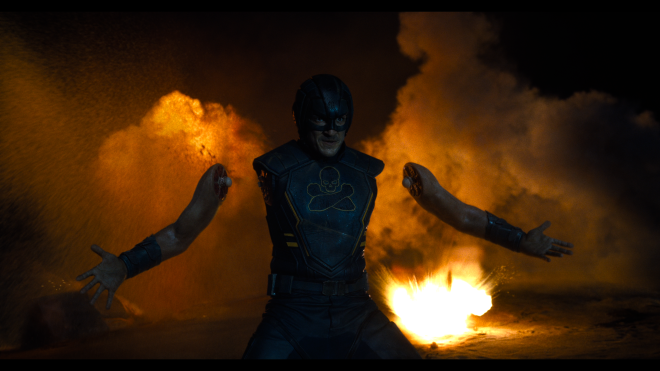 There are a number of darkly lit and night scenes throughout the film and this HDR grading handles the task perfectly. Image clarity and detail are never lost while maintaining deep inky blacks, subtle shadow variations, and image depth. Whites are bright and crisp without blooming - Waller’s knit jacket during the briefing, accents on Harley Quinn’s outfit, Peacemaker’s tighty-whities if you really want to look there for a reference point. My only small nitpick is that some of the CGI effects can appear a bit weightless, HDR can make them “float” a little more but it’s not a huge distracting issue. 99.99% of the time it’s flawless. 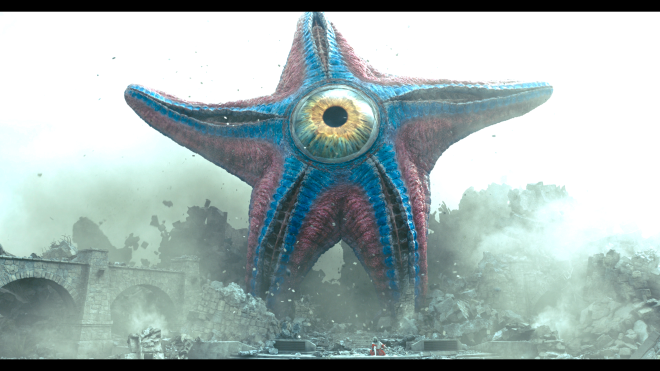 Not to leave anything on the table, The Suicide Squad arms up with an excellent Dolby Atmos audio mix that has no problem rattling your speakers and thumping the subs with some great LFE. From Gunn’s use of music to the big explosive action sequences to the scraping of gum on a prison floor, there is some really amazing pinpoint object placement.

When Waller is escorting Bloodsport through the prison introducing him to his team - or hell the opening with Savant and his ball - this is a movie designed with Atmos in mind. Each location has a distinct sound design. Sides, rears, front/center, and height channels all have quite the workout during the film. I’ve replayed the opening action sequence a few times now just because it’s so awesome - and actually damned funny! But individual bullet pops in the sand, the explosion of a helicopter, the screaming and splashing of Weasel as he drowns… it’s all great stuff! Then you have the kaiju monster smashing climax that keeps your entire setup rattling and rumbling. 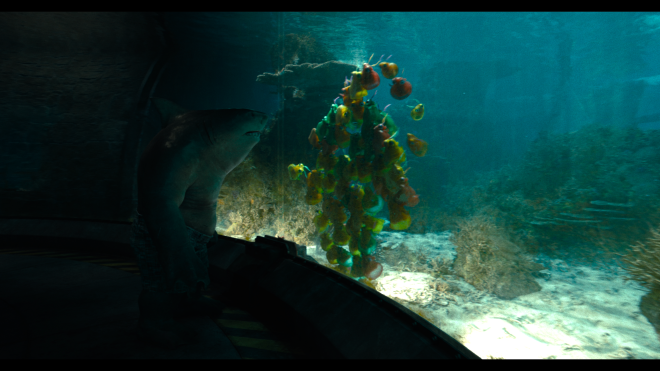 Throughout, the Atmos track is spot on. Dialogue is clean and clear and never an issue - even during the rare few quiet moments. Levels are on point without needing adjustment or compensation. That said - for the most bang for your buck, I’d recommend playing this one nice and loud. It’s a real kick and there’s plenty of LFE to go around. 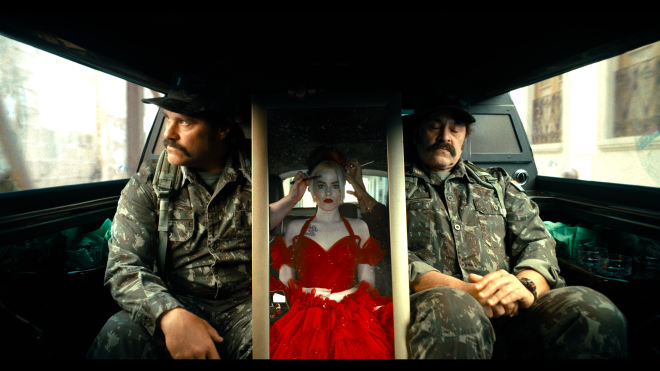 Not to skimp on the extra goodies, The Suicide Squad has some genuinely worthwhile bonus features that are long ways better than the usual assembly of forgettable EPK soundbites. A James Gunn audio commentary is never a bad thing either - I’m listening to it as I pull this review together and it’s pretty fun. The nice thing is a few of these extra features make it to the 4K disc so you don’t have to rely entirely on the 1080p disc. 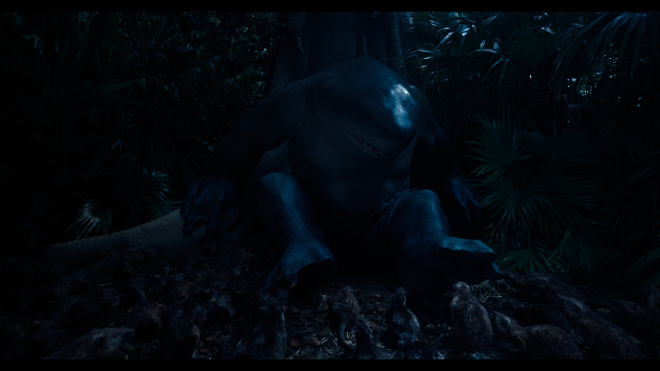 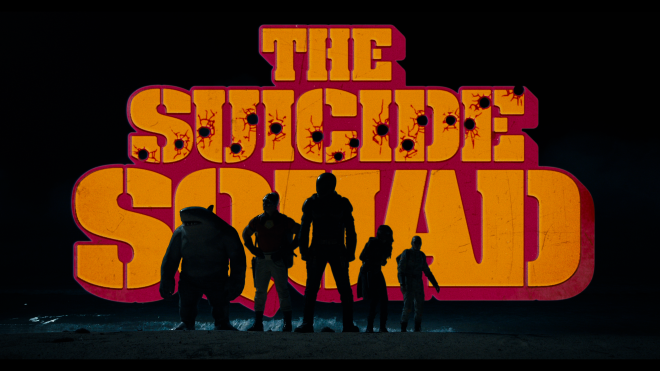 Action-packed, bloody, and hilarious James Gunn’s The Suicide Squad was a hell of a great time at the movies. Maybe one day we’ll get an Ayer Cut of the first film and we can properly judge that one, but until then - this is the movie that gets to define the franchise going forward. The hyper-violent humor may not be for everyone, but I had a genuine blast. I hope we get more of this Suicide Squad and I can’t wait for the Peacemaker series next year.

It was the movie I needed to go back to the theater for and now it’s one of the best new release 4K discs of the year. The image quality is impeccable offering an amazing native 4K HDR10/HDR10+/Dolby Vision transfer with a rocking Atmos mix to match. Topped off with some genuinely interesting bonus features that are worth watching and you have a new great demo disc to add to your growing 4K collection. Highly Recommended