Francis Ford Coppola returns to his Vietnam epic Apocalypse Now with The Final Cut - a streamlined and more efficient version of his controversial Redux edit. Lionsgate gives Apocalypse Now: The Final Cut another outing on 4K Ultra HD Blu-ray in a Limited Edition Best Buy Exclusive SteelBook release. If you already have the first release of Apocalypse Now: 40th Anniversary set on 4K Ultra HD Blu-ray - you've already got all of the content on these discs along with all three cuts of the film with the extra bonus features. This attractive SteelBook edition only has one cut. If that's the only version of the film you want or need in your collection, or if you love collecting SteelBooks this will do. The Dolby Vision HDR transfer is incredible and the Atmos audio mix demands to be turned up as loud as you can handle. Highly Recommended.

Apocalypse Now is cinematic madness captured on film. It's a singular cinematic event that can't be replicated. Francis Ford Coppola transcribed Conrad's Heart of Darkness into the chaos of the Vietnam conflict. And like that tumultuous era in American history, so too was the production of this film. From the impossibly long shoot to the weather destroying entire sets to Marlon Brando's eccentric behavior - nothing went to plan but a one-of-a-kind experience was crafted in the process. With so much material shot and left on the cutting room floor, Coppola has returned to this monster of a film for multiple re-edits. 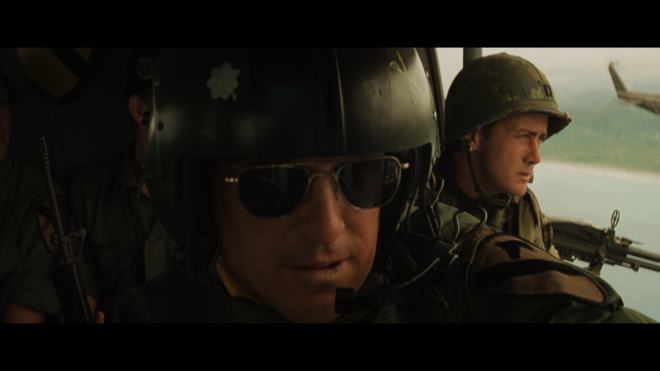 If I have to pick just one edit to hang my shingle on, it'd be the original Theatrical Cut. While I thought it was cool to see what was missing from the film in Redux - it didn't really add anything other than expanding the runtime. The extra Playboy Bunnies scene is just odd. The French Plantation does what this movie shouldn't try to do - explain the madness. On top of explaining things, it's just a bizarre segue that completely stops Captain Willard's journey for a very long stretch and then forces the film to rebuild its momentum into the last act. The Final Cut removes the strange second Bunnies scene and works to speed up the pace of Redux a little bit, but the two cuts are very similar. Any trims from the French Plantation sequence are minimal.

That's where this new SteelBook release is a bit frustrating. It's a great piece and if you're a SteelBook collector it's very attractive, but it only has The Final Cut discs. To be honest I wish I could swap the flimsy paper packaging of the original set and stick all of the discs into this SteelBook. If you're only going to own one version of Apocalypse Now, The Final Cut isn't bad. It's certainly better than Redux. But then that's my opinion of this movie. I know plenty of folks who stand by Redux as the ultimate experience. To the credit of this particular version, The Final Cut goes a long way towards appeasing fans of both versions of the film. 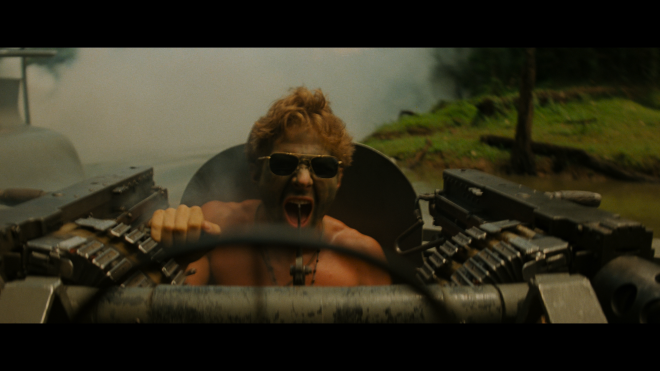 For a more in-depth take on the 4K Ultra HD Blu-ray experience, I encourage you to take a look at our Apocalypse Now: 40th Anniversary review. 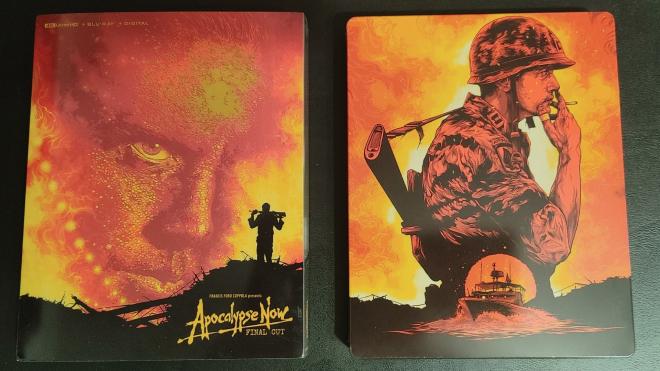 Apocalypse Now: The Final Cut gets a second tour of duty on 4K Ultra HD Blu-ray from Lionsgate as a two-disc 4K UHD + Blu-ray + Digital set with a new Best Buy exclusive SteelBook. The discs are identical to those found in the Apocalypse Now: 40th Anniversary set. In keeping with Lionsgate's latest SteelBooks, this set has a plastic slipcover that accents the actual SteelBook artwork beneath. The included digital copy code is redeemable only through VUDU or iTunes - it is not Movies Anywhere compatible so it will not automatically port to all linked streaming providers. 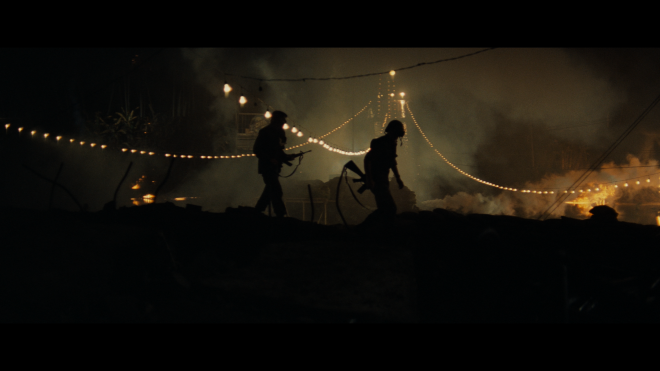 "The opening moments are on the softer side of things -- likely due to the almost continuous optical dissolves -- but once the movie turns to more traditional scene cutting, you can more clearly see the transfer's strengths. Grain remains, alive and filmic, and never intruding on sharpness. Overall detail takes a noticeable jump over the previous Blu-rays (and slightly less over the newer, included Blu-rays), revealing more textures in vehicles, characters, villages, waterways, and jungles. Where the older HD transfers are muddy at times, the new 4K scans are crisper and clearer. During all of this, I didn't encounter any signs of damage, dirt, or digital encoding errors.

Dolby Vision (HDR10 compatible) slightly boosts color accuracy, revealing bolder green leaves, blue skies, and red-orange explosions and fire. Black levels achieve crude-oil darkness and while there is some crush in certain shots -- backlit helicopters, for example -- it seems inherent to the original photography. Also worth noting, where some night sequences in lesser encodes can appear chunky and blocky, Apocalypse Now transitions out of pure black with confidence. On the other end of the spectrum, we get added specular highlights around fire, tracers, sunsets, and the glorious anamorphic lens flares." 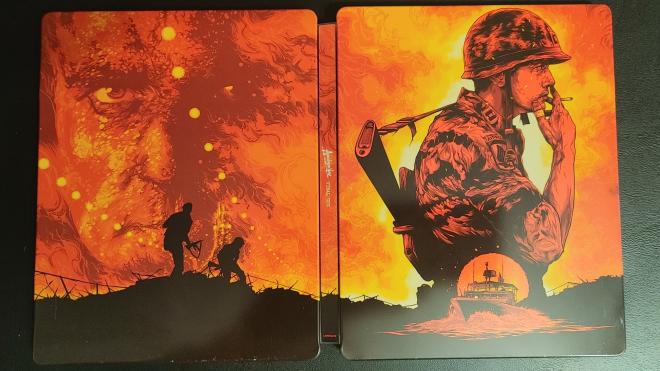 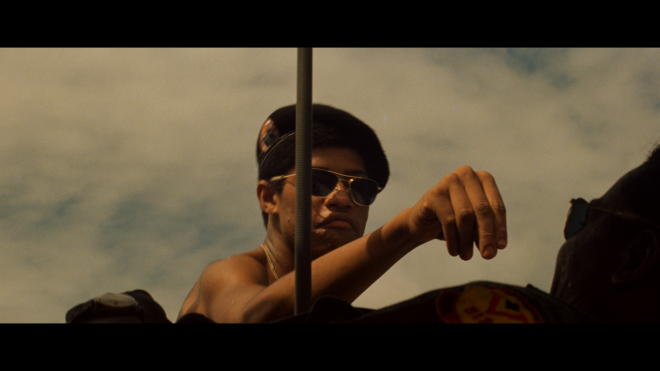 "Compared to the previous Blu-rays, the new Dolby Atmos mix feels generally taller. There's a lot of activity that plays in both your front channel and your front height speakers, which makes it seem like you have a wall of speakers at your disposal. Then come the obvious overhead effects. The movie starts off slowly -- I expected some more rotor action in the opening montage -- but it really comes alive once Willard and his crew encounter Robert Duvall's air cavalry, with helicopters swooping overhead and around the room. Later still, as a chopper flies over the night jungle playing a recording about the stolen surfboard, it sounds like the helicopter is right over your head. World-building atmospherics are wonderful too, making you feel like you're on the river, in the jungle, under the Do Lung Bridge, and trapped in Kurtz's outpost." 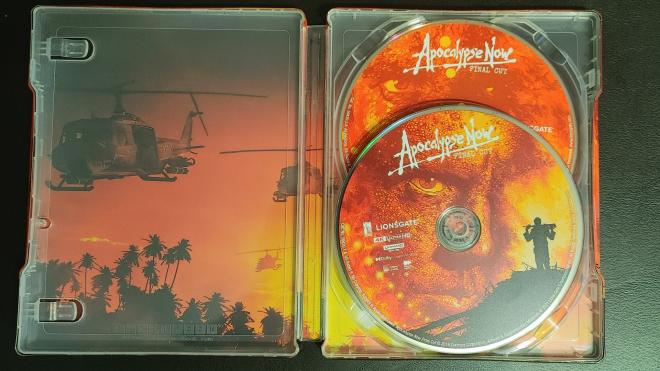 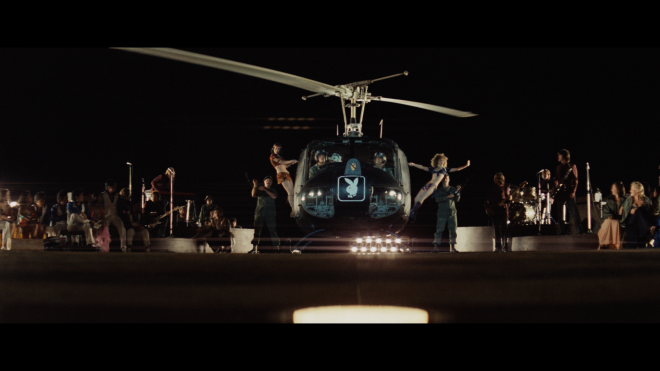 Unfortunately, Lionsgate left out the impressive extra bonus features discs found in the 40th Anniversary set. That means the only thing you're getting as an extra feature of either disc is Coppola's brief introduction and that's barely anything worth calling a bonus feature. 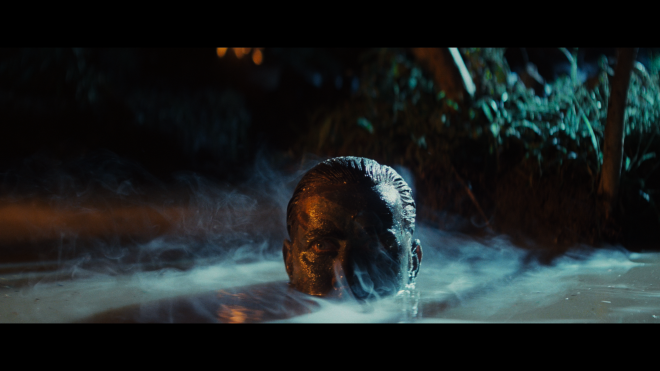 While I wouldn't call Apocalypse Now: The Final Cut the best version of the film to have - it's still a stunning and visceral experience that at the very least plays much better than Coppola's Redux cut. That said, if you're a die-hard fan of Apocalypse Now and haven't yet purchased it on 4K Ultra HD Blu-ray, the 40th Anniversary set is your best option for a full and complete experience with all three cuts and hours of bonus features. If you're a SteelBook collector or just need the one version of the film without any extras of merit, this Apocalypse Now: The Final Cut SteelBook is an option. You're getting an excellent 4K Dolby Vision/HDR10 video transfer with an amazing and immersive Dolby Atmos audio experience. Again, if you haven't picked up Apocalypse Now in 4K yet, consider your options wisely but know this trimmed down release is still a good way to go.