Francis Ford Coppola's 1979 Vietnam masterpiece returns to home video as part of a six-disc 4K Ultra HD + Blu-ray + Digital collection with a new Final Cut as well as the previous Theatrical and Redux editions. In addition to glorious 4K Dolby Vision video transfers and new Dolby Atmos mixes, this boxed set includes hours of special features, including the infamous Hearts of Darkness documentary. No matter what cut you prefer, Apocalypse Now has never looked nor sounded better, and this is the most complete collection we've seen to date. Must Own. 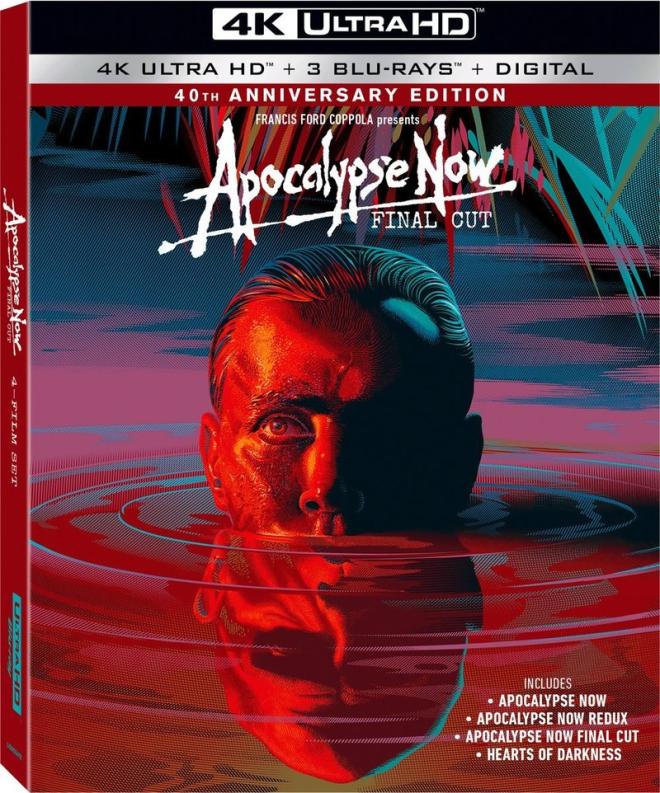 In this lose retelling of Joseph Conrad's Heart of Darkness, a broken man returns to the jungles of Vietnam on a mission to terminate -- with extreme prejudice -- a US Colonel who has gone insane. And along the way, our hero, a Captain named Williard, begins to lose himself in the madness of the jungle and the war.

For an in-depth and wonderfully written take on the movie, please read Josh Zyber's 2011 review of the Full Disclosure Edition. For my two pennies, I can't express how much I love this movie. I don't think there's ever been anything like it, before or since. It's a movie that captures the madness of an era and film production, turning a million feet of film into beautiful, horrifying, chaotic poetry. It's a triumph of what cinema can achieve when transporting audiences and characters into visual stories.

Apocalypse Now first graced cinema screens in 1979 as a 147-minute Theatrical Cut. To hear Francis Ford Coppola describe it, he shortened the film to reach mainstream audiences. In 2001, Coppola released the 196-minute Apocalypse Now: Redux, adding back in everything from the cutting-room floor. The bulk of this running time plays out in the rubber plantation sequence and a second Playboy Playmates sequence that's much darker than the Susie Q musical number. For this 40th Anniversary, we get the 181-minute Apocalypse Now: Final Cut, which retains much of the Redux material save for the Playmates scene. Mr. Coppola says this version is his preferred cut; I'll leave it up to you to pick a favorite.

Apocalypse Now returns to home video as a six-disc 4K + Blu-ray + Digital boxed set housed in a stylish-but-flimsy flipper case. In truth, I wish it came with an actual box or had purchased the SteelBook, but it is what it is. Ultra HD Blu-rays are, of course, region free while Lionsgate lists the Blu-rays as Region A, B, and C on the packaging. (We have only tried them on Region A equipment). Here's how the set lays out:

Since Lionsgate is not part of MoviesAnywhere, the digital copy redeems via MovieRedeem.com, which then asks you to select iTunes, Vudu, or Fandango as the retailer. I went with iTunes, which includes Dolby Vision & Dolby Atmos, but only for the Final Cut. The Theatrical and Redux cuts linger in a miserable-looking HD stream. Further, my code unlocked only the bonus features you'll find on Disc Five of this set (nothing from Disc Six). Please let us know if your redemption experiences are different. 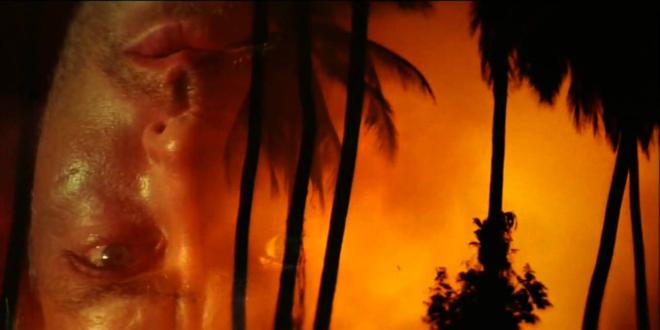 I saw Apocalypse Now in 70mm for the first time at a London IMAX during college. These were the days before the digital up-conversions when IMAX cinemas were still showing documentaries. Despite a few drawbacks from projecting 70mm on a screen meant for 70/15 IMAX film, the experience sticks with me because of its epic scope, perceptible detailing, and wrap-around soundtrack immersion.

Apocalypse Now on 4K Ultra HD Blu-ray is the closest I've ever come to recreating that experience in the home.

Sourced from a 4K scan of the original camera negatives, finished in a 4K DI, and then graded for both Dolby Vision and HDR10, these 2.35:1 2160p transfers are so utterly filmmic I don't plan to watch this movie any other way going forward.

Before we dive into the details, I'd like to say two things. First, it appears the Final, Theatrical, and Redux cuts were all treated to the same restoration and grading processes. Second, and most importantly, please note that analyzing 40-year-old films on Ultra HD Blu-ray isn't like watching a new movie. Modern blockbusters are shiny, colorful, and razor-sharp because computers, digital sensors, and cinema glass are more capable than ever. Apocalypse Now was captured on 1970s 35mm film using anamorphic lenses during one of the most insane film shoots in the history of the medium. It is, technically speaking, imperfect, but that's the way it's supposed to be.

My point? I can't quite give this a perfect score, but please know it's absolutely gorgeous, better than all previous releases, and as close as most of us will ever come to having our own 35mm print.

The opening moments are on the softer side of things -- likely due to the almost continuous optical dissolves -- but once the movie turns to more traditional scene cutting, you can more clearly see the transfer's strengths. Grain remains, alive and filmmic, and never intruding on sharpness. Overall detail takes a noticeable jump over the previous Blu-rays (and slightly less over the newer, included Blu-rays), revealing more textures in vehicles, characters, villages, waterways, and jungles. Where the older HD transfers are muddy at times, the new 4K scans are crisper and clearer. During all of this, I didn't encounter any signs of damage, dirt, or digital encoding errors.

Dolby Vision (HDR10 compatible) slightly boosts color accuracy, revealing bolder green leaves, blue skies, and red-orange explosions and fire. Black levels achieve crude-oil darkness and while there is some crush in certain shots -- backlit helicopters, for example -- it seems inherent to the original photography. Also worth noting, where some night sequences in lesser encodes can appear chunky and blocky, Apocalypse Now transitions out of pure black with confidence. On the other end of the spectrum, we get added specular highlights around fire, tracers, sunsets, and the glorious anamorphic lens flares.

Compared to modern films, you aren't going to experience edge-to-edge sharpness, there are some missed focus moments, and constant smoke and atmosphere often cloud the frame. But as I said before, this is the way Apocalypse Now is supposed to look, wonderful warts and all. And it's glorious!

Regarding the included Blu-rays, they too appear to be sourced from the new 4K scans and restorations. They lack the high dynamic range and wide color gamut, of course, and they lack the overall clarity and detailing available on the 4K Ultra HD Blu-rays, but they're a step up versus your older iterations. (Plus you get Dolby Atmos mix.)

At the end of the day, Apocalypse Now has never looked better.

Much like the video, reviewing a remixed Dolby Atmos track for a 40-year-old movie isn't cut-n-dry. On one hand, I adore the way this movie sounds, with helicopters buzzing overhead and true jungle immersion atmospherics. On the other hand, there's no lossless original theatrical mix for purists and some of the audio effects aren't quite as dynamic as you'll hear from modern recordings.

In other words, if you're open to embracing the Dolby Atmos mix, you're in for one hell of a show.

Compared to the previous Blu-rays, the new Dolby Atmos mix feels generally taller. There's a lot of activity that plays in both your front channel and your front height speakers, which makes it seem like you have a wall of speakers at your disposal. Then come the obvious overhead effects. The movie starts off slowly -- I expected some more rotor action in the opening montage -- but it really comes alive once Willard and his crew encounter Robert Duvall's air cavalry, with helicopters swooping overhead and around the room. Later still, as a chopper flies over the night jungle playing a recording about the stolen surfboard, it sounds like the helicopter is right over your head. World-building atmospherics are wonderful too, making you feel like you're on the river, in the jungle, under the Do Lung Bridge, and trapped in Kurtz's outpost.

Still, despite what is, in my humblest opinion, an overly successful audio upgrade, there are a few flaws when we compare this track to the best mixes. LFE is one aspect. I coincidentally juxtaposed Apocalypse Now with Blade Runner: 2049, which might boast the most authoritative uses of low-end and subsonic frequencies I've experienced in the home. On that scale, Apocalypse Now lacks full dynamic range and chest-pounding greatness. You hear bridges exploding, but you don't feel them, if that makes sense. Second, a few of the sound effects themselves also lack a certain clarity and fidelity we've come to expect from modern audio recordings.

That being said, if you know this movie -- and you aren't bummed out because we don't have a lossless equivalent to that 6 Track mix -- I suspect you may be pleased hearing this new version. Apocalypse Now sounds as good as, or better than, ever.

Apocalypse Now surfs back onto home video with what's, in my opinion, the most complete collection of bonus features I've seen outside of The Lord of the Rings trilogy. I'm sure there's probably something missing from an old Laserdisc release, but it's everything from the Full Disclosure Edition, including the riveting Hearts of Darkness documentary, plus six new featurettes. If you're a long-time fan who owns the Full Disclosure Edition, it might not be enough new stuff, but as someone who owns the barebones Blu-ray release, this is the motherlode.

Disc five appears to be the same disc as the one included for the 2011 Full Disclosure Edition. On it, you'll find a mix of new-for-then HD bonus materials as well as older SD special features, galleries, and audio recordings.

While disc six is similar to the last disc in the Full Disclosure Edition, there are actually SIX brand new features curated for this new release. It's all HD quality (some video, some still images).

As one of my favorite all-time movies, it's great to see Apocalypse Now get such reverential treatment on home video. In an era with far too few genuine special editions, this Final Cut release boasts three cuts of the movie, sparkling 4K Dolby Vision transfers, new Dolby Atmos soundtracks, and what feels like every possible special feature available. Quite simply, this is everything I love about being a home theater enthusiast. Must Own.