What happens when the happiest nicest NPC in a game becomes sentient? You get the nicest happiest person to ever play modern video games in Free Guy. Shawn Levy’s latest film banks heavily on the charms of its star Ryan Reynolds, and for this fun frivolous examination of heart and humanity in a video game world, it’s just enough to work. 201th Century Studios/Disney brings Free Guy to 4K Ultra HD Blu-ray with an impressive HDR10 transfer a lively active Atmos mix, and some decent bonus features. Recommended

Every day is a routine for Guy (Ryan Reynolds) - wake up, get dressed, eat breakfast, drink coffee, and go to work at the same bank, and get robbed at the bank several times throughout the day. There are special people who wear the sunglasses, and they get to do whatever they want. Guy doesn’t get to wear the sunglasses, until one day he meets the beautiful MolotovGirl (Jodie Comer) and he decides to get a pair of glasses for himself. Suddenly, the world is opened up before his eyes. Guy is now fully aware his world is a video game filled with infinite possibilities - but the release of a new sequel threatens to wipe out Guy and everyone and everything he loves. 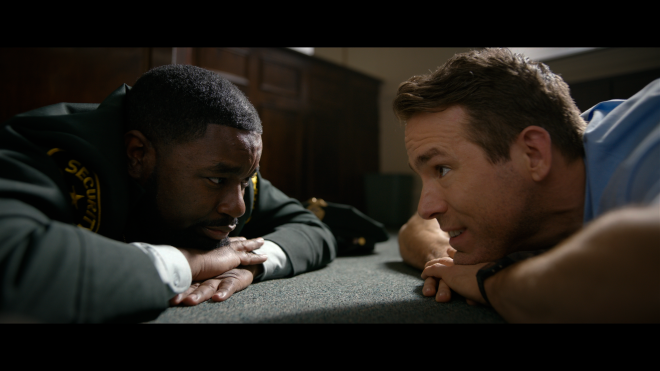 Video Game movies notoriously have had a tough time on the big screen. The list of failures is long and not worth revisiting enough to even list here. Easy would-be home runs like Mortal Kombat still largely whiffed the ball. Even thematic video game movies like Pixels failed to live up to their own potential. So far the best Video Game movies to date have been films like Hardcore Henry that aren’t actually based on a real game but bring those visual and storytelling elements to life. Free Guy falls into this category - a tribute to largescale sandbox and MMORPG games with a fun creative spin.

Essentially Free Guy plays like The Truman Show meets The Matrix with a dash of The Lego Movie for a sweet and lovable lead. A simple average Guy discovering his world is not what it seems - and he’s an individual of incredible potential. Certainly not the newest concept, but it works for this fun little jaunt. The film is at its best with Ryan Reynolds’ Guy discovering reality and all of the meta game jokes. So much of the humor is embedded in the deep code of game glitches and stock NPC character traits, Free Guy feels like it’s lovingly riffing on the entire industry instead of just one particular game. 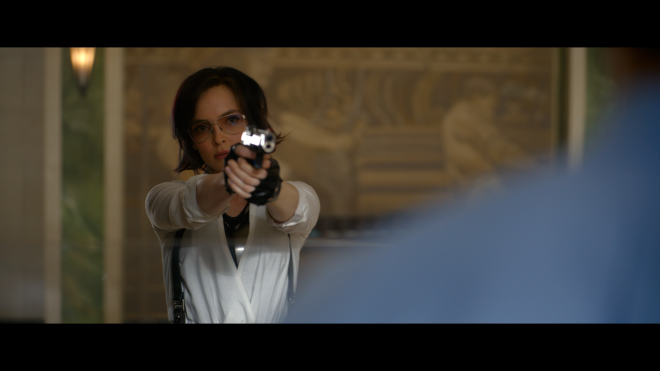 While it’s fun to watch Reynolds do his thing and shake up the gaming world by leveling up from just doing the right thing - the show is unfortunately very predictable. Pretty much the entire “real world” B and C story plotlines were a dud for me. If anything they reinforce the idea of why video games are so popular because the real world can be pretty damn dull. The plotline with Jodie Comer’s human alter-ego Millie, her sorta former programming partner/boyfriend Keys played by Joe Keery is just a non-starter. They’re fine actors and their little story gives some framing to the film, but it’s just not interesting enough to hang an emotional lynchpin on. Even casting someone as talented as Taika Waititi as their megalomaniac game developer nemesis is a miss. He’s more cartoonish than the NPCs in the game. Where Guy and the rest of the residents of Free City enjoy an arc, the real world is pretty flat.

By the time the credits closed, Free Guy was a fun flick. Certainly entertaining and never a slog, but like so many video game movies it doesn’t quite live up to its potential. The cast for the most part is great in their key areas. Lil Rel Howery is a standout as Guy’s best friend Buddy and I loved their interplay. The nod to They Live with Guy trying to get Buddy to put on a pair of glasses was great. I just wish there was more of that - Guy trying to wake up the world he lives in instead of the outside "human" elements. Comer is a lot of fun when she’s full MolotovGirl. Channing Tatum as Revenjamin Buttons damn near stole the show each time he showed up. In fact, it’s the frequent cameos and nods to other games that upstage the story. The simplest way I can put my feelings about Free Guy is that while it’s a fun ride, it’s the stuff happening in the background that’s often a lot more entertaining.

Vital Disc Stats: The 4K Ultra HD Blu-ray
Free Guy uploads to 4K Ultra HD Blu-ray in a two-disc 4K UHD + Blu-ray + Digital set from 20th Century Studios (never going to get used to saying that) and Disney. Housed in a two-disc black case with identical slipcover artwork, the disc load to the standard Disney language menu before rolling onto an animated main menu with traditional navigation options. All bonus features are found on the 1080p Blu-ray disc. The digital code is Movies Anywhere compatible. 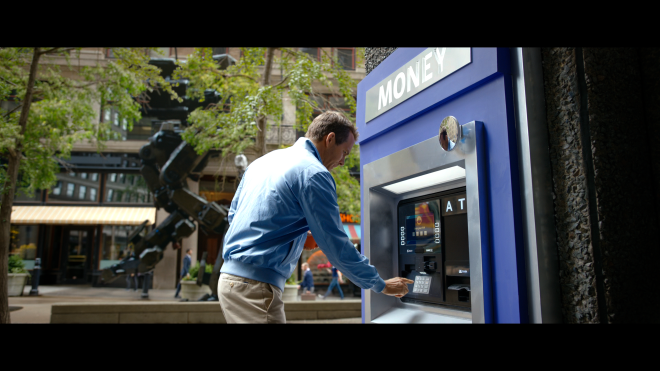 Considering this film largely takes place in a video game of limitless visual potential, it’s no surprise this native 4K 2160p 2.39:1 HDR10 release is so damned impressive! From the first time Guy wakes up in his apartment and says “good morning” to his goldfish - this transfer is often striking with lifelike details, bold colors, and a terrific sense of three-dimensional depth.

As I said, the details are terrific. You can fully appreciate all of the intricate and wacky costuming of the film - each player’s character skin is more wild and elaborate than the next. Attention to details in set design and the production values reveal a number of in-jokes. This is where paying attention to the background can be a problem for the main movie - there’s so much to see and so many little Easter Eggs to find throughout the world of Free City. 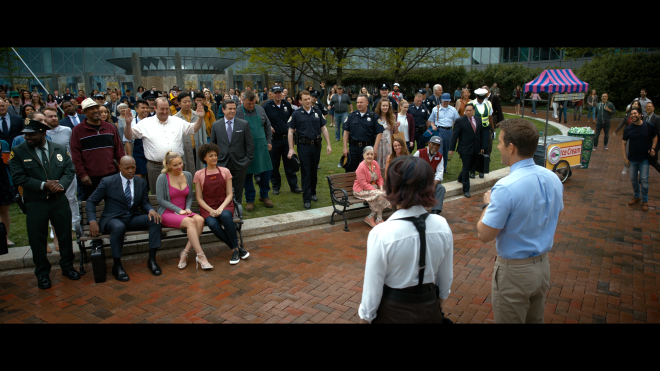 Thanks to HDR10, the colors are rich and bold and pop off the screen. This is especially the case whenever you’re in a POV frame looking through the glasses. The sense of depth in the visual effects is really cool. Considering its design and execution, this would have been a really fun movie to see in 3-D! Kudos to the effects team for some impressive CG rendering. There are some obvious effects which you expect and do stand out more with HDR than the SDR 1080p disc, but there’s so much CGI work that’s virtually seamless and lifelike. Dude is a great example of CGI and real-world effects work that isn’t betrayed by HDR or higher image resolution. Black levels and contrast are on point with deep inky blacks, nice shadow separation, and bold crisp whites. When MolotovGirl is trying to break into the stash house is a highlight sequence with her white shirt, the black/shadowy background, and the golden lights inside.

Now, the digital 4K release hits with Dolby Vision HDR. That’s the Disney normal these days. I’ll admit that I liked how some of the colors are better resolved here than the HDR10 disc - the various shades of blue are the main highlight - the overall presentation felt much flatter. Watching on both iTunes and VUDU, I got the same flat image vibe along with some troublesome black levels that’d kick with some microblocking and other unsightly anomalies. Digital is convenient but stick with the disc. 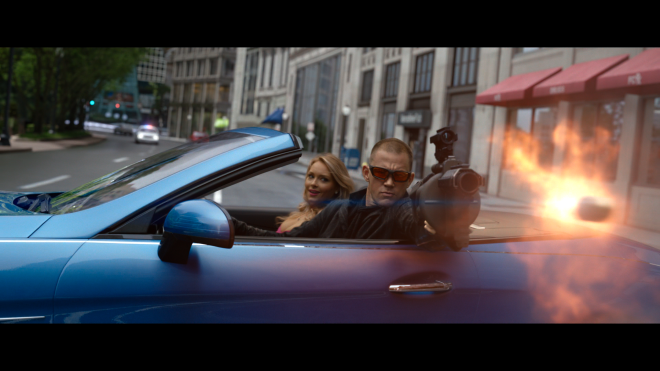 Free Guy comes packed with a Dolby Atmos audio mix that continues Disney’s latest streak of not needing any extra volume compensation. From frame one this mix is hopping with an amazing amount of surround activity fully engaging height channels and kicking some excellent LFE action. It’s even better when Guy puts on the glasses for the first time and he sees all of the little things in his world he can’t otherwise experience and the pin-point object-based effects are a lot of fun. Characters or objects that fly through the screen move around the surrounds into the centers and up into the height channels - it's a real kick. Explosions rattle the subs nicely. A climactic car chase sequence is a sonic delight with all sorts of auditory carnage whipping throughout the soundscape.

Dialog is strong without any issues. Scoring by Christophe Beck is lively and keeps the game world exciting and engaging while pumping up some of the more poignant human world themes. On that note - that’s where this mix is particularly effective. The Game World and Human World have a different sonic feel to them. The Human World still has plenty of engaging surround elements but it’s not nearly as over-the-top. It gives each location some distinction. Also - most of the Human World is in an office and there’s really not a lot you can do with that setting. It’s an office. Offices are supposed to sound kinda boring with people milling about and not a lot of action - which the mix pulls off effectively. 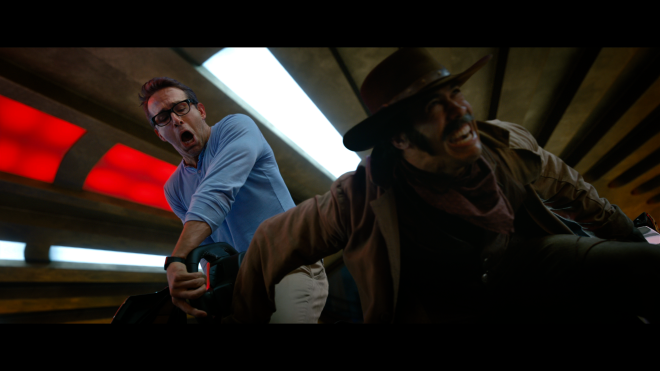 While not the biggest and greatest assortment of bonus features ever collected - this release comes with some decent little extras worth picking through. My only complaint is everything is pretty short and a lot of things amount to quick EPK highlights. The deleted extended scenes aren’t much more than a few extensions here and there and a couple of new moments, but as a whole, the movie doesn’t miss them. The best bonus feature is the look at the Dude vs Guy fight and how they pulled off the digital and practical effects work. 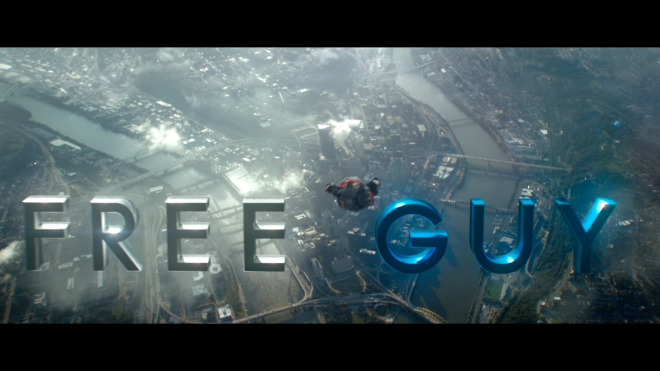 Free Guy was a lot of fun. Not the greatest movie I’ve ever seen, but a nice one. I’ll chalk up my reaction largely to high expectations - a lot of people were telling me how great this movie was. I didn’t love it, but I enjoyed it. Ryan Reynolds’ gives his best and it shows with a character that’s easily heartfelt and lovable. All of the video game references and gags are a nice touch but they can overwhelm the main story.

Disney/20th Century Studios gives Free Guy a splendid 4K Ultra HD Blu-ray release. The native 4K HDR10 video transfer is excellent across the board with impeccable details and bold colors and image depth. The Atmos mix is lively and present without the old Disney issues to stick things up. Bonus features won’t blow your hair back but they’re worth picking through. I may not have loved this but I know a lot of people will and at the very least this is a terrific disc to enjoy. Recommended