Alistair MacLean’s classic WWII adventure novel comes to life in The Guns of Navarone 60th Anniversary Edition - 4K Ultra HD Blu-ray. Directed by J. Lee Thompson and starring Gregory Peck, Anthony Quinn, and David Niven - the classic adventure film packs all of the tension and excitement you could ask for in a movie like this. Now on 4K Ultra HD Blu-ray, the film is in excellent shape and the native 4K HDR10 transfer offers some visual improvements but the true upgrade comes from the new Atmos mix. Another genuine classic to add to the collection - Recommended.

After already spending over a year behind enemy lines, Captain Mallory (Gregory Peck) was due a break. But a special mission in the Aegean Sea requires his unique abilities. The Nazis have a hidden radar-controlled gun battery that can’t be hit by sea or by air. The Allies need Mallory to lead a team of men on a suicide mission to destroy the guns on Navarone. With help from the greek Colonel Stavros (Anthony Quinn), the bomb expert Corporal Miller (David Niven), a skilled assassin (Stanley Baker), the Greek soldier Spyros (James Darren), and his resistance leader sister (Irene Papas) - they just might have a chance to complete the mission, save 2,000 stranded soldiers, and maybe survive to fight another day.

I was a little kid when my dad went on a kick showing me all kinds of WWII adventure movies. Where Eagles Dare, Night Train To Munich, The Dirty Dozen, Kelly’s Heroes - there’s an entire sub-genre of war films dedicated to the impossible mission and the rag-tag team of men assembled to save the day or die trying. Really when you boil them down, they’re pretty well all the same. The team comes together - albeit reluctantly because a couple of them just don’t get along. Then they’re dropped into hostile territory barely surviving often without all of their essential supplies. Then there’s a spy that’ll test their resolve. Then they’ll have to change the plan and still find a way to accomplish the mission. 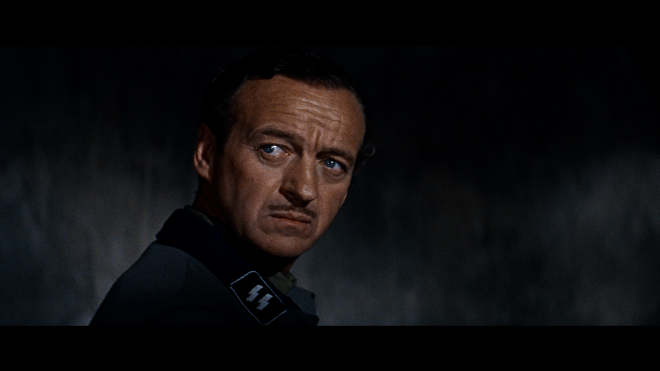 Even knowing the mechanics of these films going in, they’re still exciting. I think the reason why I’m drawn to them, again and again, is that they’re simply not made anymore. Or if someone tries it's usually pretty damn terrible. The Guns of Navarone was the first Alistar MacLean novel to make it to the big screen in 1961 and it’s arguably the best even though I do have a heavy soft spot for Where Eagles Dare. You have an incredible cast in peak form with Gregory Peck headlining while Anthony Quinn does what he does best and steals every damn scene. From the treacherous crossing of the Aegean to scaling the cliff face in a storm to the thrilling finale - you’re on the edge of your seat with your heart up in your throat. All credit to Force 10 From Navarone for trying to recapture the magic, but this film is a tough act to follow. 60 years after it hit theaters it’s still an intensely entertaining show right to the final frame. 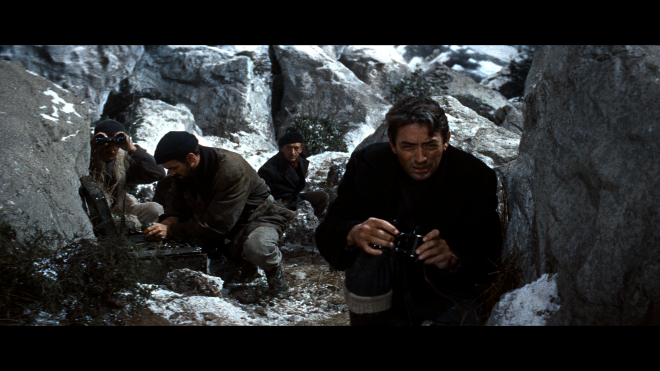 Vital Disc Stats: The 4K Ultra HD Blu-ray
The Guns of Navarone is given a two-disc 4K Ultra HD Blu-ray + Blu-ray + digital release to celebrate its 60th Anniversary in style. Pressed on a BD-100 disc, the discs are housed in a two-disc sturdy black snapper case with a special limited slipcover depicting the film’s classic poster artwork. The disc loads to a static image main menu with traditional navigation menu options on the bottom, and the two bonus features featured on this disc on the righthand side. The included Blu-ray is the exact same 2011 disc. In addition to the digital slip in another double-sided slip “Restoration of The Guns of Navarone” by Grover Crisp detailing what it’s taken to get the film in as good a shape as it is. 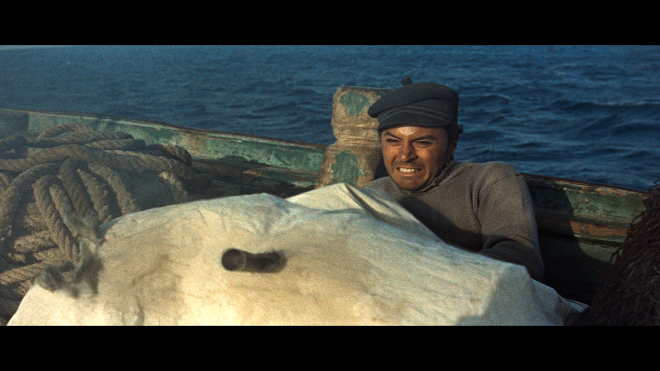 The first full restoration of The Guns of Navarone is practically a story unto itself. Beginning in the early 90s when restoration technology was just starting to come available, this film has gone from nearly being lost completely to becoming a modern marvel. Now it’s important to set some expectations - picture-perfect “shot like yesterday” is just not possible on this one. Many factors from how poorly the film was originally preserved to the Cinemascope process impact this film. Some shots are absolutely stunning and vividly lifelike. Others are severely rough around the edges. Again that’s partly how poorly the film was kept for decades, and that’s partly because of the numerous process shots and optical zooms. All factors aside, The Guns of Navarone looks pretty damn good in 4K with HDR10 in what is likely the best we'll ever see for this film.

Sourced from the same 4K restoration files as the 2011 disc, detail levels pick up a nice little uptick in overall refinement. Details in facial features, beards, scenery, clothing - little improvements add up to a pretty impressive image a lot of the time. Film grain is also better resolved this outing, The 2011 disc could appear a tad weathered and noisy at times, but that’s not as severe here. Again because of the numerous process shots or how Cinemascope films have a very limited clean focal range, there are some soft shots and optical transitions take on a notably rougher appearance. But once those adjacent frames clear the image improves quickly. 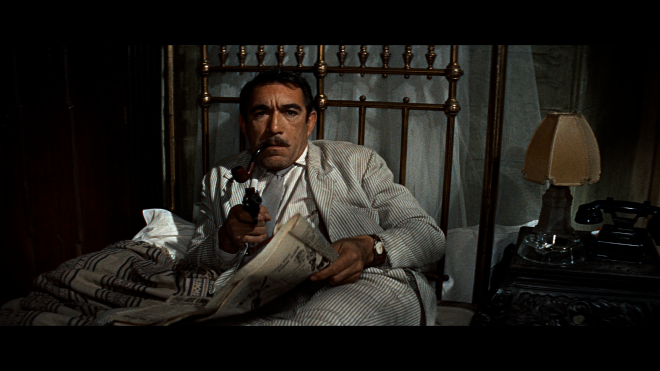 HDR10 helps this transfer out quite a bit. One drawback I had with the 2011 disc was how inconsistent shadows and black levels could appear - especially in scenes without any kind of optical effects. Black levels are overall closer to the true inky black with better shadow separation. Colors are a bit healthier as well with stronger primaries - the opening blue background with yellow credits is especially vivid. Skin tones are also a little warmer and healthier looking than before. Whites are nice and crisp without blooming - the cafe scene is especially lovely with bold colors, excellent shadows, and bright brilliant whites.

Knowing how poorly this film used to look, this 4K is certainly a welcome improvement. Without some major new leap in restoration technology, this one probably won’t look any better than this. Even with the source limitations, this disc does offer up a modest improvement over the 2011 disc for a fitting addition to the collection. 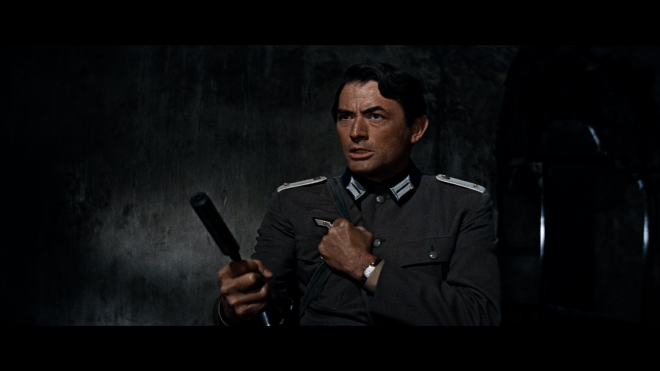 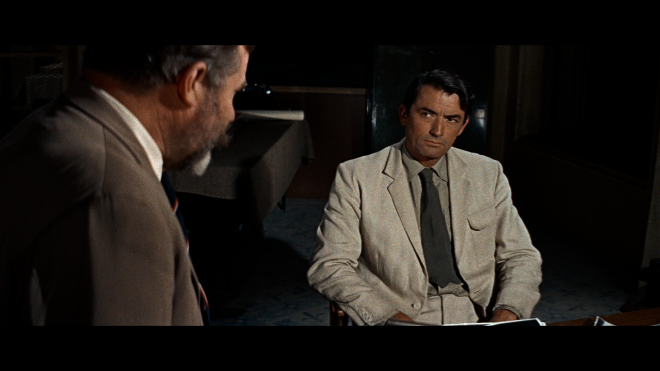 Not standing by with just a visual upgrade, Sony is giving The Guns of Navarone three excellent audio tracks to choose from. The DTS-HD MA 5.1 mix is the same solid track from the 2011 disc. There’s a new and very good DTS-HD MA 4.0 stereo mix that’s a little more in keeping with the film’s original release. The difference from the 4.0 mix and the 5.1, the soundscape is a bit more in your face through the front/center channels. Imaging isn’t quite as spacious but the mix has a bit more overall impact.

Now the real winner of this disc is the new Atmos audio mix. I wasn’t expecting it to be this impressive but it’s a lot of fun. From those first cannon shots, this track packs a lot of oomph with splendid imaging and some nice LFE where it counts. Height channels get a bit of playtime as well - Mallory’s airplane landing, the Nazi scout plane flying overhead in the Aegean, when they’re being bombarded in the mountains - the pinpoint placement of the sound effects are a lot of fun. That’s to say nothing of Dimitri Tiomkin’s excellent score! The opening credits practically beg you to turn the volume up as loud as you can. Throughout the mix, the dialog is clean and clear without issue. Some of the canned sound effects and dubbed in lines can feel a bit hollow and stand out more in Atmos than the other two mixes, but it’s not overly distracting. All in all, you have three very good choices - but I’m going to lean into the Atmos mix for this one. 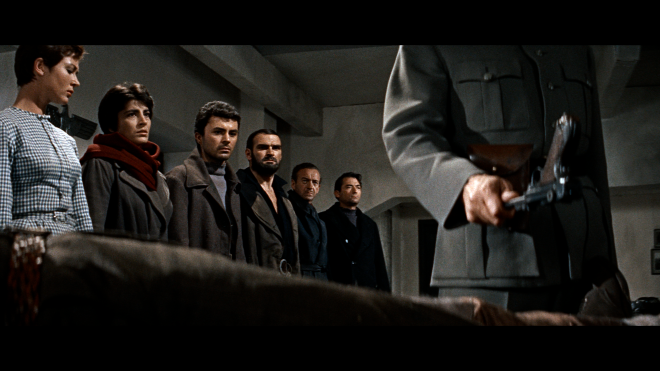 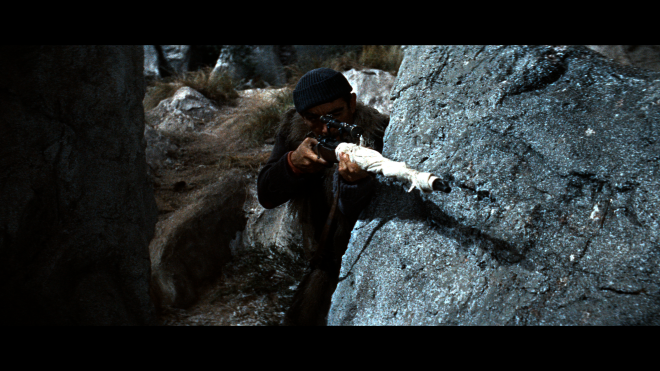 With the 2011 disc included, you get a nice collection of new and archival bonus features. The materials on the 4K disc are the newest, but also least impressive overall. The Main Title Progression reel is cool to see what they tried first but then ultimately what they went with side-by-side. The rest of the features on the 2011 disc are all pretty great and informative so if you haven’t even given them a look, do so. 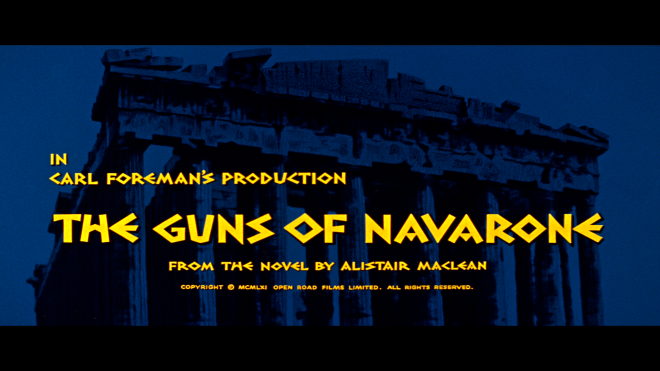 The Guns of Navarone is one of the finest examples of high adventure filmmaking. With richly drawn characters it’s contemplative while providing some terrific thrills. Gregory Peck, Anthony Quinn, and David Niven are in excellent form for this rousing WWII adventure. After decades of mistreatment, it was lovingly restored for a great Blu-ray in 2011. Now in 2021 for the film’s 60th Anniversary, it’s given a welcome native 4K HDR10 upgrade. The rough spots still look rough, there’s no getting around that. But, when this transfer is in good shape it looks beautiful offering many appreciable improvements over past releases. On top of the video upgrade, fans are treated to a new immersive Atmos mix along with a solid DTS-HD MA 4.0 stereo track. Add in one new - but short - extra feature along with the great assortment of legacy extras and you have a pretty great set to celebrate 60 years of The Guns of Navarone - Recommended