The beloved classic film about friendship, perseverance, hope, and redemption in a brutal Maine prison gets a superior 4K upgrade that sentences its 2008 Blu-ray counterpart to death row. The Shawshank Redemption is more riveting, lyrical, and affecting than ever before, thanks to a glorious HDR transfer that bursts with fine detail and a new, robust DTS-HD Master Audio soundtrack. If you love director Frank Darabont's pitch-perfect adaptation of Stephen King's novella, you'll be bowled over by this fantastic Ultra HD presentation. Must Own.

Hope springs eternal - or so the saying goes - and no other movie in film history depicts that platitude with more sincerity and reverence than The Shawshank Redemption. Writer-director Frank Darabont's achingly beautiful, often poetic adaptation of Stephen King's memorable novella remains a searing cinematic experience more than 25 years after its premiere, yet the splendor of Warner's new 4K UHD release adds visceral accents to this unforgettable drama that make its simple themes resonate with even more power. Nominated for seven Academy Awards, including Best Picture, The Shawshank Redemption has grown in stature over the years to become one of the most beloved movies of the past quarter-century ... and maybe of all time. It's current 9.3 rating on IMDb makes it the top-ranked movie by users of the popular Internet site and secures its stature as a bona fide neo-classic.

I was a huge King fan in my youth and remember reading Different Seasons, the author's collection of four non-horror novellas, with relish when it first came out in 1982. (The book, which still stands as my favorite King opus, spawned two other film adaptations, Stand by Me and Apt Pupil.) Each of the well-constructed, engrossing stories brims with eloquence, but the tale chronicling an abiding 20-year friendship between two inmates during their incarceration at a remote Maine prison strikes a special chord that Darabont brilliantly captures in his lyrical direction and literate Oscar-nominated screenplay. His embellishments, which elongate the story and transform it into an epic, enhance rather than hinder the drama and help hammer home such potent themes as legal injustice, prison abuse (from guards and inmates alike), moral and institutional corruption, dogged perseverance, and the lasting negative effects of long-term prison sentences. 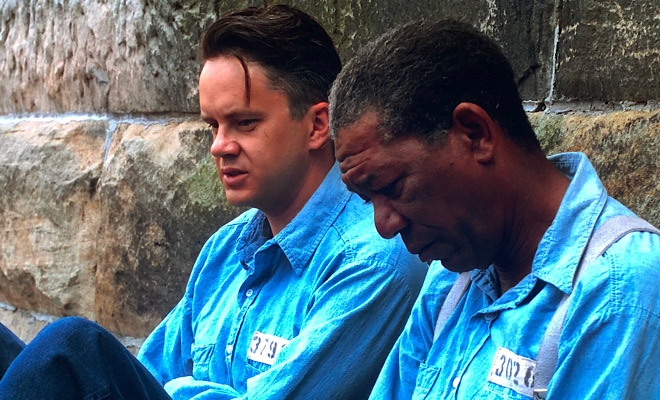 The inspired casting of Best Actor nominee Morgan Freeman as "Red," the unlikely best buddy of Andy Dufresne (Tim Robbins), who - despite his vehement profession of innocence - is convicted of killing his unfaithful wife and her illicit lover in the late 1940s, injects a racial element into the story that didn't exist in King's novella. Deep friendships between white and black men were rare in that era, and Darabont's sensitive depiction of their uncommon and unbreakable bond adds extra poignancy to the film. Of course, Freeman's mellifluous narration and understated portrayal (he conveys more with a glance or stare than most actors can with reams of dialogue) ups the emotional ante, and his terrific chemistry with Robbins, whose equally stellar work often gets overlooked, maintains the film's hypnotic grip even during its slower stretches.

A gallery of memorable supporting characters spice up and flesh out The Shawshank Redemption and transform the picture into a true ensemble piece. The performances of Bob Gunton as the harsh and manipulative prison warden, Clancy Brown as an abusive guard, and a luminous James Whitmore as a crusty fellow inmate all contribute to the movie's success, yet without the lush, often dreamy cinematography of photographic wizard Roger Deakins, the stirring score of composer Thomas Newman, and Terence Marsh's authentic production design, the film would never have gained the level of critical and popular acclaim it enjoys today. 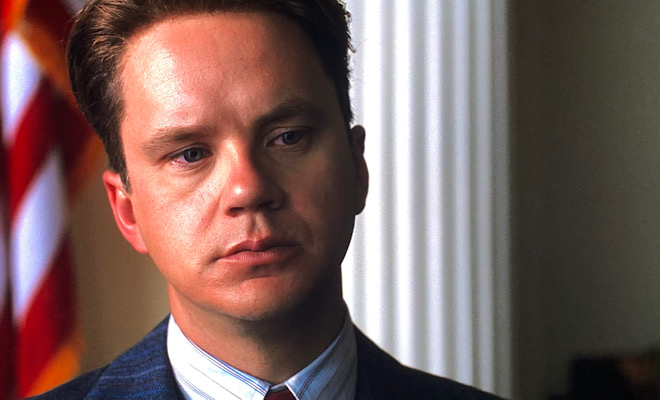 Much like Birdman of Alcatraz, The Shawshank Redemption is a prison film that's not at all about prison, but rather the resilience of the human spirit and its ability to adapt and thrive within a horrific system designed to crush even the hardiest soul. The movie can be brutal at times, but it's the underlying tenderness and aura of decency and forthrightness radiating from many of the misfit inmates who did bad things but aren't necessarily bad people that make it soar.

We're dealing with some pretty dark days right now, but the hope and grace that course through every frame of The Shawshank Redemption can inspire us to get through them and find the light that surely lies at the end of the tunnel. And if Andy and Red can muster the strength to try and find that light, then certainly - with this magnificent film as a guiding beacon - so can we. If you love The Shawshank Redemption, now is the time to watch it again, and if you've never seen it, don't wait any longer. Though it can't cure our ills, this impeccably mounted, inspirational film can at least restore our faith ... and that's a start.

For another perspective on The Shawshank Redemption, check out the HDD review of the 2008 Blu-ray by clicking HERE. 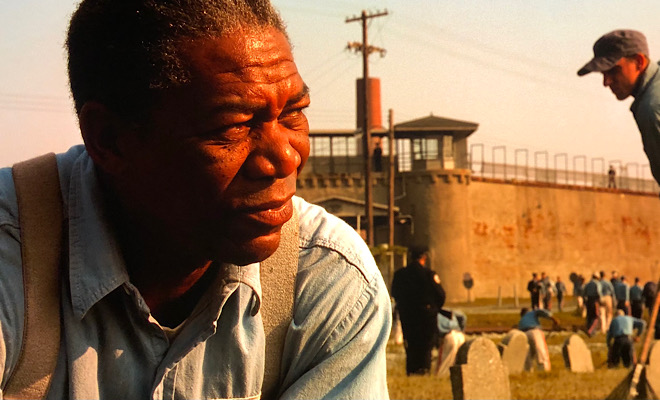 The 4K Ultra HD edition of The Shawshank Redemption arrives packaged in a standard clear case inside a sleeve. A Blu-ray disc and leaflet containing the code to access the Movies Anywhere digital copy are tucked inside the front cover. Video codec is 2160p/HEVC H.265 and audio is DTS-HD Master Audio 5.1. Once the disc is inserted into the player, the static menu with music immediately pops up; no previews or promos precede it.

There are 4K upgrades and then there are 4K UPGRADES. This 2160p/HEVC H.265 HDR transfer completely leaves its 2008 Blu-ray counterpart in the dust and instantly stands as the definitive home video version of this classic film. Exceptional clarity and contrast bring Roger Deakins' gorgeous Oscar-nominated cinematography to brilliant life, yet thankfully, a faint smattering of glorious grain maintains the essential film-like feel. Though the palette remains drab for most of the movie, splashes of color make huge impressions. Bold, brassy reds, verdant greens, and cool blues grab attention, and the orange glow that bathes the picture during its final half-hour exudes a wonderful cozy warmth. Inky blacks anchor the image, the bright, crisp whites never bloom, and superior shadow delineation allows us to drink in the dank, foreboding atmosphere of the prison cells. Fine details pop off the screen - the prison's rusted metal, chipped paint, and worn wood, the checkerboard's texture, the contours and shadings of the stone walls, the weave of the prison uniforms, and the most delicate pinstripes on suits - while razor-sharp close-ups highlight stray hairs, facial blemishes, pores, tiny knicks and cuts, and hair follicles (even on hands and fingers). 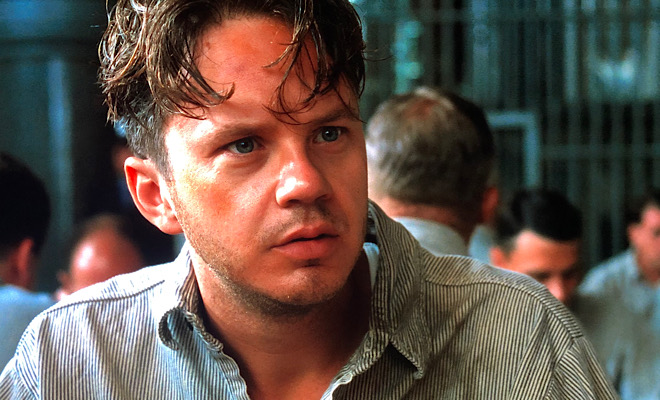 The differences between the HDR and Blu-ray renderings couldn't be more distinct and are instantly apparent from the very first frame, a long shot of a dark, lantern-lit bungalow nestled in the woods. A few moments later, the heightened clarity and enhanced details of the HDR transfer really dazzle the eye when we gaze upon Robbins on the witness stand and can pick out the faint, jagged red lines in his bloodshot eyes. The tunnel shots of the parole room through the distant tiny window engulfed by a sea of blackness are also much clearer. In addition, crisper edges and substantially more vivid hues pump up the picture's impact, and all of the annoying nicks and specks that occasionally dotted the Blu-ray print have been erased. By comparison, the Blu-ray looks as drab, dull, and lifeless as the characters' existence inside Shawshank, and if I didn't prize my digibook collection, I'd toss my Shawshank Blu-ray in the trash. One thing is certain, though. I will never watch this movie in 1080p again, and I can't imagine anyone else would either after taking a gander at this dazzling 4K UHD HDR presentation. 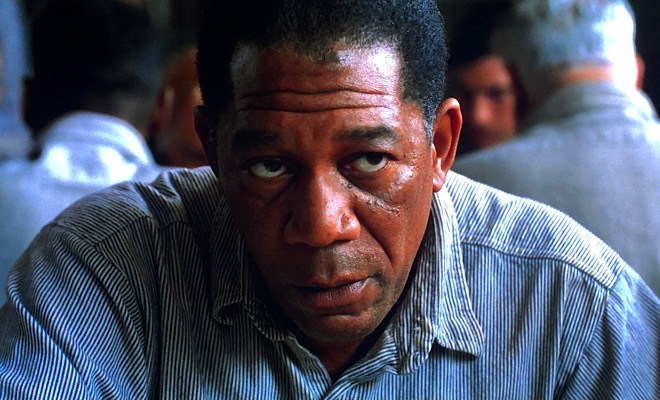 We didn't get an Atmos track on this disc (but in all fairness, this quiet, introspective film doesn't really require one), but Warner did thankfully replace the old Dolby TrueHD audio with a DTS-HD Master Audio 5.1 track that finally shows us why The Shawshank Redemption nabbed an Oscar nod for Best Sound. I didn't notice any difference in the track's elements or detect any reordering of various effects, but the audio definitely has more bite and subtle atmospherics and delicate nuances like dripping water and footsteps sound much more distinct. Surround effects are still limited, but they make much more of a statement when they do crop up. Stereo separation is more pronounced, too, producing a far more immersive presentation. The well-prioritized dialogue is easy to comprehend and excellent fidelity and depth of tone help Thomas Newman's sweeping Oscar-nominated score sound better than ever before. Many might not call the switch from Dolby TrueHD to DTS-HD MA an "upgrade," but it's a notable enhancement (dare I say game-changer?) that nicely complements the stunning HDR video transfer.

All the supplements from the 2008 Blu-ray have been ported over to this 4K release. The commentary track resides on both the 4K and Blu-ray disc, but all the other extras are exclusive to the Blu-ray. For a complete review of all the special features, click HERE.

Hope springs eternal, and The Shawshank Redemption remains an eternally great film. The emotionally affecting tale of an unlikely but abiding friendship spawned in a brutal Maine prison features a host of memorable characters, an array of important themes, several fine performances, and sensitive direction by Frank Darabont, and it looks spectacular in the splendor of 4K HDR. A robust, brand new DTS-HD MA soundtrack complements the gorgeous, razor-sharp transfer that makes this riveting adaptation of Stephen King's acclaimed short novel feel more immediate and immersive than ever before. If you're a fan of this unforgettable neo-classic - or if you haven't seen it before - you need to add this impressive disc to your collection. Must Own.