Arguably one of the lesser installments, Leonard Nimoy's Star Trek IV: The Voyage Home is nonetheless a dearly beloved, nostalgia-riddled entry for this fan. The concluding chapter in the "Genesis Trilogy" comes with a heavy-handed environmental message full of silly humor but gifts the crew of Enterprise a memorable redemption story. The adventure comes home on 4K Ultra HD sporting a strong Dolby Vision video, an identical Dolby TrueHD track, and pretty much the same set of supplements. As part of the Star Trek: The Original 4-Movie Collection 4K Ultra HD Blu-ray Set, the overall UHD package is Recommended.

Although I can admit that Leonard Nimoy's second tour of directorial duty is one of the lesser entries of the series, Star Trek IV: The Voyage Home has nonetheless earned a special place in my heart. I openly profess to enjoy the concluding chapter of the "Genesis Trilogy" while wearing massive rose-colored glasses. It is purely a nostalgia piece for me, and I love it, warts and all. The movie does stand out from the rest, especially after the somber tone of the previous two, for its family-friendly, oft-wacky comedic aspects and overall lighthearted air. Chekov being detained and injured while trying to heist a nuclear reactor is more shenanigans than seriously dangerous, and Spock trying to master profanity is just downright goofy. All the while, it lacks the creative subtlety of its predecessors with a heavy-handed environmental message about saving the whales, which ultimately comes off as the filmmakers tapped into the cultural zeitgeist of the period.

My love for this fourth installment, however, is due to deeply personal reasons, from a major part of my life that makes me forgive the film's shortcomings. When it was made available on home video the following year after its theatrical run, I had only been in the U.S. for maybe three or four years. And although I was already familiar with and a fan of the Star Trek series, Nimoy and Harve Bennett's fish-out-of-water story about time-traveling to present-day America oddly made a more lasting impression than the other movies or the show. I instantly related to Spock trying to make sense of the cultural norms and language, and I laughed at Chekov's pronunciation of vessel. Every time I sit down to watch the movie, I still find myself giggling at the silly humor while reminiscing on my childhood. For a young teen picked on for being an immigrant, movies and shows like Star Trek were my escapist solace, and the fourth entry, in particular, was one I could relate with the most at the time. The Voyage Home remains a fun and personally loved installment. 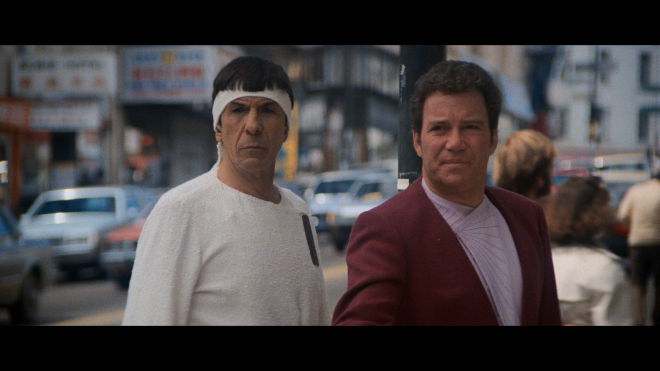 The Genesis storyline comes to a close on Ultra HD with what appears to be the result of another true remaster of the original camera negatives although a few notable issues remain worth mentioning. For the most part, the HEVC H.265 encode shows a welcomed uptick in overall definition and clarity, from the discrete sharp details of the Klingon ship and the streets of San Francisco to the fine stitching in the costumes and the individual leaves of trees. In Dolby Vision HDR, the most striking gain comes from the improved contrast and brightness balance, bathing the 2.35:1 image with bright, vivid whites and true, inky blacks that allow for better visibility within the shadows and the darkest, poorly lit corners of the Klingon vessel. Specular highlights supply the visuals with a crisp, dynamic sparkle along metallic surfaces and a more brilliant but narrower glow in the hottest areas to reveal more of the finer details.

However, the biggest complaint with the picture quality is the inconsistency, which was a salient problem with the Blu-ray but is now made more pronounced at this resolution. This would seem to suggest that either the issue is with the condition of the elements or inherent to the original photography. Whatever the case may be, the native 4K transfer often shifts from a vibrant, eye-catching image with plenty of richly saturated colors to suddenly a dull and lackluster palette where those same colors look faded and wanting, sometimes within the same scene. For example, the scene where Catherine Hicks's cetologist gives Kirk and Spock a ride, the two shot of the men shows lush green grass and a lovely blue sky, but the single of Hicks is noticeably washed out and flat, which does affect the contrast and brightness of the picture. There are also several soft moments sprinkled throughout, and facial complexions can be a bit of a mixed bag as well.

All things considered, despite its less-than-satisfying distractions, the overall transfer is strong and marked upgrade over its HD SDR counterparts. Awash in a very fine layer of grain, the encode has a nice film-like quality fans will appreciate. (Dolby Vision HDR Video Rating: 74/100)

The time-traveling adventure arrives to home theaters with an identical Dolby TrueHD 7.1 soundtrack and is arguably the strongest of the lot. Almost immediately, the soundstage feels broad and welcoming as Leonard Rosenman's score fills the room with clean distinction and an extensive, room-penetrating mid-range. Background activity convincingly moves between the three front channels, generating a broad sense of space, and several atmospherics display excellent directionality, nicely extending the soundfield. When applying the receiver's Dolby Surround or DTS: Neural:X up-mixing functionality, those same effects appreciably bleed into the top heights with satisfying effectiveness. Dialogue is precise and very well-prioritized over the loudest segments, and a surprisingly robust, weighty low-end provides a palpable presence to the on-screen visuals, making for an outstanding listen and a really great lossless mix.

For a more in-depth take on the audio quality, you can read Josh Zyber's review of the Blu-ray HERE. (Audio Rating: 84/100)

Although considered one of the lesser installments, Star Trek IV: The Voyage Home is, for this fan, nonetheless a dearly beloved entry in the series, largely due to the nostalgia attached. As the concluding chapter in the "Genesis Trilogy," writer Harve Bennett and director Leonard Nimoy gift the crew of Enterprise a redemption story wrapped in a heavy-handed environmental message and a good amount of humor that personally, makes the movie all the more memorable. The adventure comes home on 4K Ultra HD sporting a strong if also somewhat problematic Dolby Vision HDR presentation that still offers a significant upgrade over its Blu-ray counterpart, but it features the same Dolby TrueHD 7.1 soundtrack and pretty much the same set of supplements. As part of the Star Trek: The Original 4-Movie Collection set, the overall UHD package is recommended.