Nicholas Meyer's Star Trek II: The Wrath of Khan is a gripping naval adventure set in space, the sequel that satisfies hardened loyal fans as well as casual viewers and builds to an emotional climax that remains just as impactful as ever. The sci-fi classic boldly goes into 4K Ultra HD territory refitted with an attractive Dolby Vision video, an identical Dolby TrueHD track, and pretty much the same set of supplements. As part of the Star Trek: The Original 4-Movie Collection 4K Ultra HD Blu-ray Set, the overall UHD package is Recommended.

After audiences and critics felt underwhelmed by the first movie, director Nicholas Meyer (Time After Time, Star Trek VI: The Undiscovered Country) course-corrected the franchise with what is widely beloved as the best installment of the series, Star Trek II: The Wrath of Khan. The sequel not only delivers a grander sense of adventure and thrills to appease casual viewers, but Harve Bennett's story also enlists material from the original television show to satisfy the more hardened fans, which is one of my favorite aspects of Meyer's film. This is not only a sequel to Wise's underrated first entry, but it is also a direct, feature-length follow-up to the open-ended conclusion of the episode "Space Seed" where the genetically enhanced human Khan (a memorably wonderful Ricardo Montalbán) and his compatriots return from exile. It was an incredibly smart move on the part of Bennett, one that allowed Meyer the opportunity to essentially make a grand naval adventure flick in space.

At the center of Khan's revenge against William Shatner's Starfleet Admiral James T. Kirk is the terraforming initiative called Project Genesis and a powerful device that could be weaponized. The plot doesn't carry the same weighty, pressing subject matter of its predecessor, but the sequel's ideas about mortality, rebirth and the cycle of life and death are no less heady and substantial. From Khan grieving the death of his wife to the literal birth of a new planet, the theme is prevalent throughout, impacting characters in various ways, even in Kirk grappling with the end of his tenure as Captain of the Enterprise and reconciling with his estranged son. With Meyer all the while aptly focusing on the camaraderie of Kirk, McCoy and Spock, the story skillfully builds to that emotionally memorable climax that has become a piece of cinematic history. And revisiting the film after countless viewings, the impact of that ending has not waned in the least.

Also, it's funny to think that after launching the first in the so-called "Genesis Arc" trilogy with The Wrath of Khan, Meyer would eventually become responsible for the two best installments of the entire franchise when he returned for The Undiscovered Country nearly ten years later. 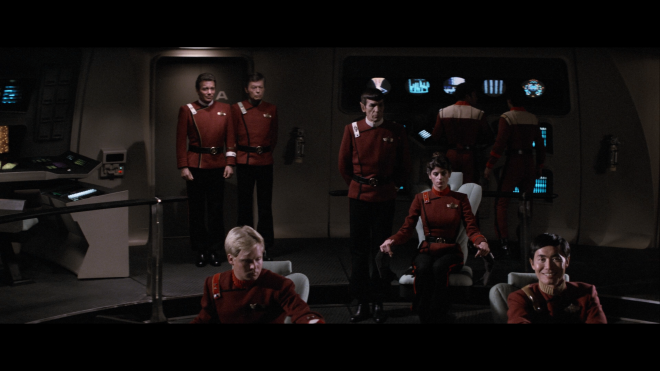 The adventure continues on Ultra HD with another excellent HEVC H.265 encode that was also reportedly struck from a fresh remaster of the original elements.

Although the opening scenes during the simulation exercise at first don't appear very promising, the native 4K transfer is nonetheless a welcomed upgrade, showing a visible uptick in overall definition and clarity. The majority of the picture admittedly falls on the softer side, but it's important to keep in mind that it was intentionally shot in soft focus and is inherent to the elements. This creates a slightly smoother appearance in the faces of Enterprise's older crew members. But in the scenes with Khan and his gang of young pirates, detailing is significantly sharper, revealing lifelike textures in the faces and Montalbán's chest while the threading in his crew's tattered clothes is distinct and the individual hairs are discrete. Many of the visual effects and composition shots stand out a bit more, which is to be expected, but they hold up remarkably well. Overall, this is a notable step-up from previous home video editions.

Awash in a very fine layer of natural gain, the Dolby Vision HDR presentation also furnishes the forty-year-old film with a cleaner, livelier contrast balance and brighter whites throughout. It may not look it, at first, considering the filmmaker's deliberately dark, toned-down creative intentions, but the contrast is an improvement. And mixed with the richer, truer black levels and the strong shadow details, the 2.35:1 image comes with an attractive cinematic appeal and appreciable dimensionality, particularly in those scenes with Khan aboard the starship Reliant. Likewise, the cinematography of Gayne Rescher favors a more earthy, natural palette, bathing the visuals in richly-saturated browns, animated ginger-amber tones and deep rust-orange marigolds. Primaries are nonetheless accurately rendered and bolder than its HD SDR counterparts, such as the ruby-burgundy reds of the uniforms and vibrant, electrifying cobalt blues in the starship's computer consoles.

All in all, this is a satisfying upgrade, and the film has never looked better. (Dolby Vision HDR Video Rating: 82/100)

As with the first movie, this Dolby TrueHD 7.1 soundtrack is identical to the one on the Blu-ray, which is not a bad thing though an object-based track would have made a welcomed addition.

Faithful to the original stereo design, the front-heavy presentation displays good channel balance with plenty of good background activity, especially during the action sequences to generate a relatively wide, broad soundstage. However, the mid-range isn't particularly dynamic or extensive, feeling more uniform and somewhat limited in the upper ranges, yet it maintains clarity and definition decently well in James Horner's score and during the loudest segments. The same can be said of the dialogue, but the conversations remain intelligible nonetheless. The low-end adds a bit of weight to the visuals but doesn't make much of an impression overall. There's little activity in the surrounds, mostly reserved for some mild bleeding and a few random ambient effects. The receiver's Dolby Surround or DTS: Neural:X up-mixing functionality does well in expanding some of these atmospherics into the top heights with satisfying effectiveness. All in all, it's an enjoyable lossless mix that does great to complement the on-screen visuals.

For a more in-depth take on the audio quality, you can read Josh Zyber's review of the Blu-ray HERE. (Audio Rating: 78/100)

Arguably, in the eyes of casual mainstream audiences, director Nicholas Meyer course-corrects the franchise with the sequel Star Trek II: The Wrath of Khan while simultaneously satisfying loyal fans of the original television series. Serving as both a sequel to the first movie and a follow-up to the episode "Space Seed," the film is a rousing naval adventure set in space with an emotional climax that remains just as impactful forty years later. The sci-fi classic boldly goes into 4K Ultra HD territory equipped with an attractive Dolby Vision HDR presentation, giving fans a notable upgrade over its Blu-ray counterpart, but it features the same Dolby TrueHD 7.1 soundtrack and pretty much the same set of supplements. As part of the Star Trek: The Original 4-Movie Collection set, the overall UHD package is Recommended.