Arguably one of M. Night Shyamalan’s best films - Unbreakable starring Bruce Willis and Samuel L. Jackson saves the day on 4K Ultra HD Blu-ray. The initially underappreciated cult classic grew into a trilogy franchise and now the series is complete on 4K thanks to Disney dipping into their expansive back catalog. With a fresh Native 4K HDR10 transfer, the same audio mix to match but reissues the same slim bonus features. Recommended

David Dunn (Bruce Willis) is the lone survivor of a catastrophic commuter train crash. Not only is he the only survivor, but he is also miraculously unharmed. Elijah Price (Samuel L. Jackson) is no stranger to accidents having endured over 50 bone breaks in his life thanks to a rare genetic disorder. Elijah is convinced that the archetypes made popular in comic books are in fact real and that he and David share an uncanny connection forcing David to examine his life and his natural abilities.

After the major mega surprise hit with The Sixth Sense, M. Night Shyamalan was a filmmaker who could write his own ticket. He could make a sequel to his career-defining film. He could jump onto a popular franchise that struggled for decades to get a fourth film off the ground. Or, he could come up making something wholly original - and pleasantly unexpected. He chose the latter option and was all the better for it.

In a career now defined by crazy twist endings, I would argue Unbreakable is M. Night Shyamalan’s best film because its success is not built on a twist ending or a rug-pulling reveal. Even what most people would call a "twist" isn't even a twist if you're paying attention. It’s just damn great storytelling. This film is impressively straightforward - an origin story for a brand new form of superhero grounded in an everyday reality long before it was the pastiche of modern comic book films. Heroes walk among us. Everyday people with amazing abilities they’re not fully aware of do exist. An unassuming balding security guard in fact has never been sick, never had a cut or life-altering injury, is incredibly strong, but his life is so ordinary these extraordinary abilities go unnoticed by anyone - including himself. 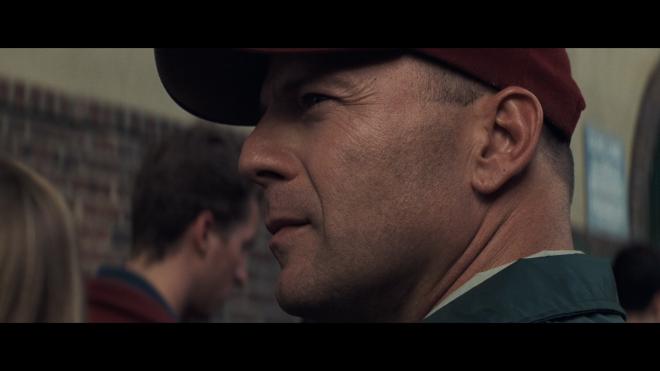 As a lifelong collector, Unbreakable was everything I wanted to see in a comic book movie. After struggling through the 90s with so many terrible comic book films, the scant few watchable films like Blade were a rare treat. Even a solid first entry like X-Men had some iffy spots that were thankfully rectified for the sequel. But Unbreakable was special, it was new and different, and without source material to adhere to. It could be a tribute to an art form while being its own thing. It could pay homage to numerous heroes without having to stick to tradition. Then it became a franchise and almost lost some of what made it so special.

While this film was far from a mega-hit when it hit theaters, it developed a following, and talk of a sequel lingered for years. After every iffy film like The Village or a genuinely terrible movie like The Happening, the question would inevitably pop up - when would the sequel to Unbreakable happen? Well, we got the solid tangential sequel with Split but were left with the rather underwhelming Glass to conclude the story. This then begs the question - why do a sequel at all? Split could have been its own film and been perfectly entertaining without the final stinger. Glass simply didn’t need to be. In general, I think Glass was entertaining and had an interesting concept with some solid ideas, but the buildup for the film couldn’t match the desired payoff. It’s an alright conclusion. But it deserved to be better than just "alright." Sometimes once is good enough when it’s been done perfectly. We didn’t need a sequel to Jaws - but we got three of them anyway. 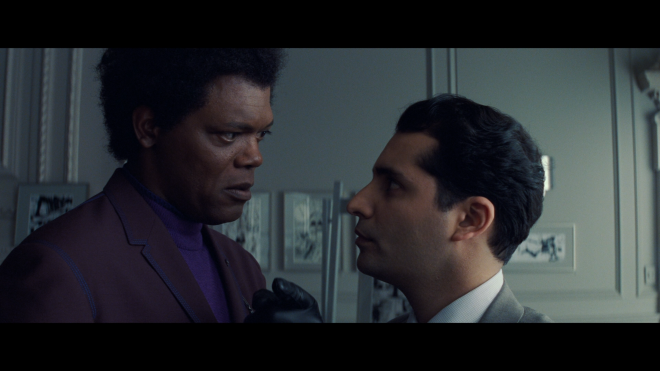 Sequels and franchise aspirations aside, the good thing about Unbreakable is that the sequels can’t take anything away from it. It can stand on its own. The film is still a great character piece about a man struggling with his own sense of significance. That feeling of “more” is relatable to anyone. If all David actually was is an average man, husband, and father, who grew to believe in himself and that he could make a difference, it’d still be a compelling story. Bruce Willis doesn’t actually need superpowers for Unbreakable to be a damn good movie. That's just a bonus to add some extra flavor to the film.


Vital Disc Stats: The 4K Ultra HD Blu-ray
Unbreakable turns a page and arrives on 4K from Disney in a two-disc 4K UHD + Blu-ray + Digital set. Both the 4K presentation and the included 1080p Blu-ray are sourced from a new 2021native 4K digital intermediate remaster. The 4K disc is a BD-66 with the 1080p a standard BD-50. Both discs are of course region-free. The discs are housed in a standard black two-disc case with identical slipcover artwork.

A SteelBook Edition Is Also Available 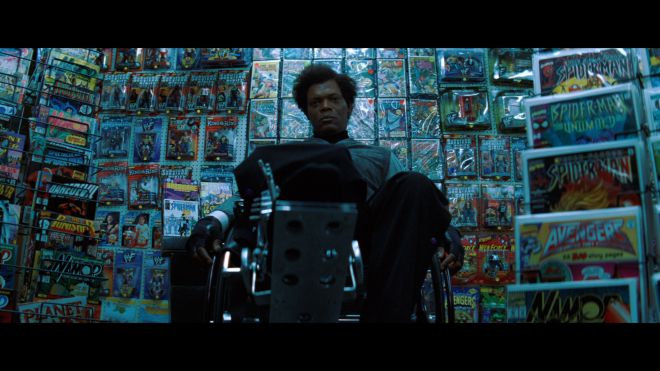 Unbreakable arrives on 4K Ultra HD Blu-ray with a respectable 2160p HDR10 upgrade. Due to the film’s dour color pallet of dark blues, purples, and deep shadows, this new transfer’s benefits don’t exactly leap off the screen. But after flipping the discs a few times, the improvements gradually become more noteworthy. When it’s at its best, Unbreakable offers a stunning lifelike image. When it’s not at its best, it’s still pretty damn good.

The first thing I noticed with this transfer is that Blue is a much stronger color throughout. When David’s on the train and later wakes up in the hospital, there’s a much stronger icy-blue tone than the 2008 Blu-ray. Reds and oranges have also been pulled back a bit keeping the film feeling like a story that takes place in the early fall rainy gray season. Flesh tones are a little more healthy and normal-appearing now. Reds and Yellows don’t get a lot of room to shine, but when Elijah is in the comic shop, look at the colors of the covers or the inflatable Spider-man figure for some pop. 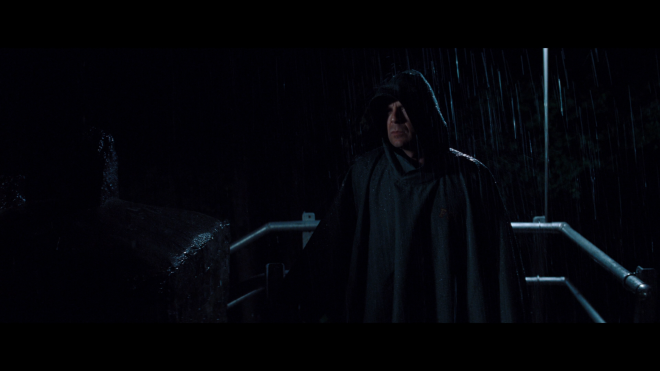 Throughout, fine details are sharp and clear without the telltale signs of edge enhancement that were apparent in past releases. Skin texture, the individual blue accent stitching in Elijah’s coat, and other small details in the production design get their day in the sun. Grain has been retained with a natural organic texture for a very welcome film-like appearance without any signs of smoothing. There are some soft shots here and there where I looked for signs of smoothing, but grain was still present enough to suggest that's simply how the film was shot. The opening train sequence is a sign of what I'm talking about. The source elements are also in much better shape without speckling or any apparent grit.

The understated HDR10 application does what it’s supposed to by giving colors extra pop and whites a little more luminance. Where HDR10 really helps this film is in the darkest, shadow-drenched sequences. The scene where Audrey asks David if he dated anyone while they were apart, or when he’s lifting the weights, or the final act where he intentionally uses his powers for the first time - the shadows and light gradience are much better resolved with a better sense of image depth, deep inky blacks, all while maintaining fine details.

Again, this may not be a genuine “wow” upgrade for most folks, but since this film hasn’t really seen a loving hand on disc in over a decade, it was due for restoration and the results are worth it. Maybe not demo material, but still an appreciable upgrade. 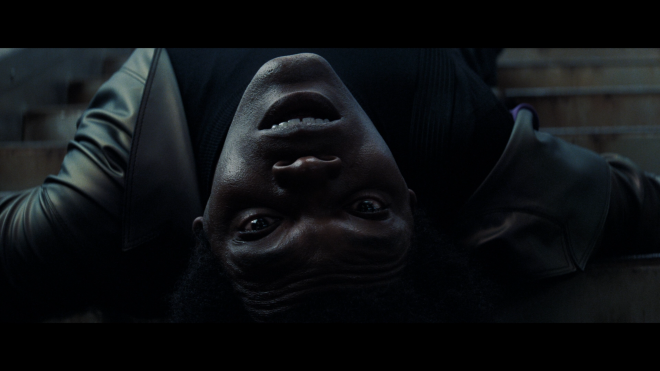 Not seeing an upgrade, the same DTS-HD MA 5.1 track has been ported over. And that’s perfectly okay. This mix was impressive in 2008 and it’s still pretty damn good today despite advances in home theater technology. This just isn’t a film that calls for an aggressive object-based format like Atmos or DTS:X. Rolling DTS Neural:X did little to “improve” the experience. The mix still offers clear dialog. The James Newton Howard score is still excellent. 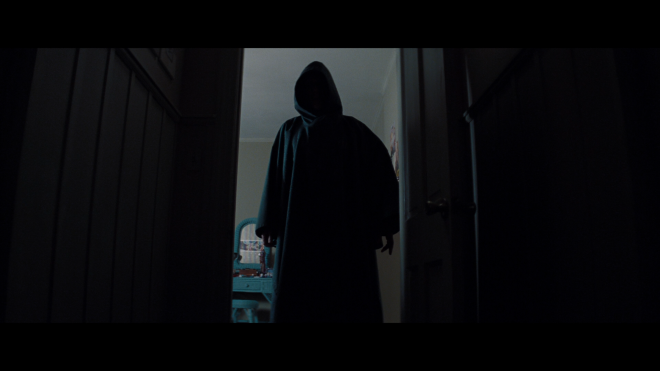 Now in a bit of a bummer, no new bonus features have been added to the show. In fact, none of the extras are on the 4K disc, only the included 1080p disc. What's here is interesting, but even then it's not everything that was included on the old Special Edition DVD. They haven’t been remastered, still SD. 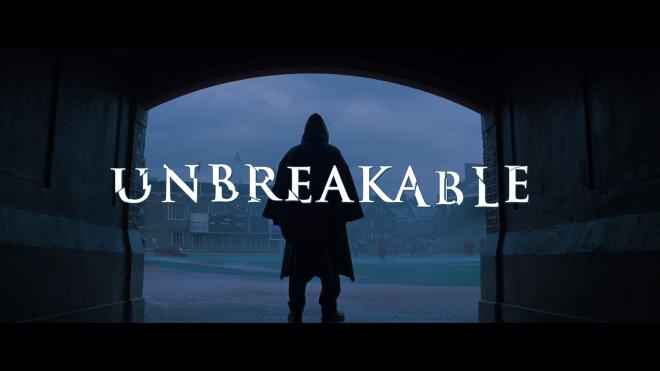 With Unbreakable, the trilogy is now complete on 4K Ultra HD Blu-ray. This first film remains the best of the three and is a great example of the creativity that M. Night Shyamalan can bring to the big screen if he can hold his best and worst tendencies in check. Both an homage and deconstruction of comic book mythos, this film was the best comic book movie of its time - without actually being based on a comic book. Disney gives the film a fitting upgrade to 4K with a fresh remaster in HDR10 offering a cleaner and clearer image transfer than previous releases. A sticking point for some may be the lack of an object-based audio mix, but it doesn’t really need one, this audio track is still excellent. The only real downside is the lack of any new and exciting bonus features. As my personal favorite Shyamalan film, I’m excited and happy to have this on 4K. Recommended.

A SteelBook Edition Is Also Available