Writer and director Justin Lin returns for another thrilling ride in F9: The Fast Saga, but unfortunately, the ninth installment shows signs the franchise may be running out of gas and coasting on nitrous fumes. The car-centric melodrama swings to the cliffs of 4K Ultra HD sporting a sleek, handsome Dolby Vision HDR video, a highly satisfying Dolby Atmos track, and the same body of supplements shared with the Blu-ray. The overall package makes for a Recommended ride for HDR junkies.

It was bound to happen sooner or later that the Fast & Furious franchise would eventually jump the shark, or as in this case, swing from the cliffs. And in an action series that amounts to little more than a well-choreographed demolition derby, that is saying a heaping lot. But here we have it. Rather than giving fans another simple check-your-brain-at-the-door symphony of grinding metal and thunderous explosions, F9: The Fast Saga is a deafening dud the defies its own rules of believability. Yet, the filmmakers plainly desire for this ninth entry to be taken deadly serious in spite of Roman's (Tyrese Gibson) meta-commentary that is neither funny nor clever. When characters openly admit to their own miraculous indestructibility, the movie becomes nothing more than a 140-minute barrage of gonzo, trivially hollow visuals of souped-up cars catching other criminal comrades, giant drones nabbing a car jumping in midair and massively boosted magnets that always seem conveniently aimed for maximum damage.

Director Justin Lin returns to the franchise after a brief absence from the last two entries to work on a few television projects, and this latest installment definitely shows traces of that television influence. The action is a mix of cartoonishly over-the-top and confusing nonsense where the obvious CG car stunts are shown in wide shots and easy to follow, but the choreographed fights are an incomprehensible mess of rapid-fire edits and fleeting camera movements. Making that television influence all the more apparent is a script, which Lin co-wrote with Daniel Casey (Kin), further embracing the daytime melodrama of its predecessors. This story is laughably teeming with even more family infighting, betrayals topped by other betrayals, never-before-mentioned secret family members causing havoc only to find redemption and characters returning from the dead. It's made all the worst by a ridiculously pointless weapon that's ultimately little more than a MacGuffin, a pathetically dopey villain and a criminally under-utilized Charlize Theron. 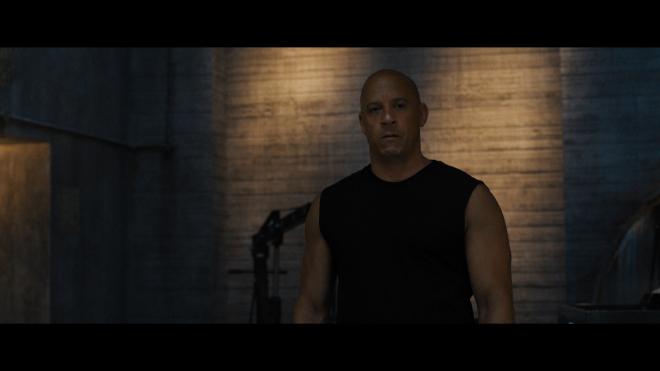 The absence of writer Chris Morgan, who has been nurturing and developing the film series since Lin's Tokyo Drift, is deeply felt here, and F9 is arguably a middling middle-of-the-road entry at best. And for this fan, it is the weakest installment, more of a show car and less of a fun thrill ride.

For a different take on the film, check out our theatrical review HERE.

Vital Disc Stats: The Ultra HD Blu-ray
Universal Studios Home Entertainment brings F9: The Fast Saga to 4K Ultra HD Blu-ray as a two-disc combo pack with a Digital Copy code. When redeeming said code via UPHE.com and MoviesAnywhere, owners are granted access to the 4K UHD edition with Dolby Vision and Dolby Atmos for both the Theatrical Version and Extended Director's Cut, both of which are also included on the UHD and Blu-ray discs. The difference is about seven minutes of extra action in the climactic conclusion and Jordana Brewster's Mia being introduced earlier into the plot. The triple-layered UHD100 disc sits comfortably opposite a Region Free, BD50 disc inside a black, eco-cutout case with a glossy, embossed slipcover. At startup, the disc goes straight to a menu screen with full-motion clips and music playing in the background.

The car-centric melodrama swings to the cliffs of Ultra HD sporting a sleek, handsome HEVC H.265 encode, which was struck from a 2K digital intermediate. Shot on a variety of traditional 35mm and digital cameras, the upconverted transfer boasts sharp definition throughout mixed with some noticeably softer moments and a few very mild instances of aliasing that are easy to overlook. In spite of that, the 4K video maintains excellent, clean detailing in the various vehicles and exotic shooting locations, exposing the smallest scratch and dent along a car's body or on the walls of buildings. Spot-on contrast balance supplies brilliantly beaming whites, making for a gorgeously vivid picture of Tbilisi and allowing for outstanding visibility in the far distance. Bits of debris hurtling across the screen are distinct, and specular highlights add a crisp, sparkling shine to the hottest areas while also furnishing the metallic surfaces of cars with a realistic sheen.

The Dolby Vision HDR presentation also displays a vibrant, sumptuous array of primaries, showering the bonkers action in the lush, lively greens of the surrounding foliage and computers. Blues range from the electrifying cobalt glow of monitors to the gorgeous cerulean skies, and reds vary from the deep garnet of the Pontiac Fiero to an animated crimson in the very few scratches suffered by the characters. Secondary hues are equally bold and flamboyant, such as the warm canary yellow and marigold glow of interior lights or from the fiery orange of explosions to the spirited tiger shade of the Toyota Supra. There is also the beautiful dark royal purple of Queenie Shaw's Noble, the soft teal glow from some interior lighting, and an attractive assortment of browns and tans in several exterior sequences, particularly at the beginning of the movie. 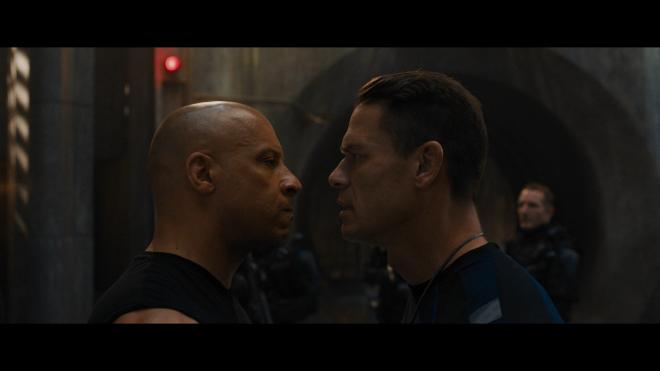 All the while, brightness levels deliver inky rich blacks with outstanding gradational differences between the various shades of the vehicles, especially the diverse selection of Dodge Chargers driven by Dom. Poorly-lit interiors maintain exceptional visibility of the finest details within the darkest, midnight shadows, such as in the scenes inside Mr. Nobody's underground bunker, but the London nighttime scenes are picture-perfect and demo-worthy. From beginning to end, the 2.39:1 image has a lovely cinematic quality to it with highly revealing, healthy-looking facial complexions in the entire cast, making a beautiful video transfer. (Dolby Vision HDR/HDR10+ Video Rating: 90/100)

The ninth furious ride for family lands into home theaters with an awesome, thunderous Dolby Atmos soundtrack that wastes no time kicking into high gear and throttling viewers into the middle of the action. The room fills with debris scattering in every direction, and the background activity fluidly moves across three front channels and into the top heights for a fantastically engaging half-dome wall of sound while the sides and rears expand those atmospherics to fully envelop the listener. The sound of helicopters, cars flying in the air and armored big rig trucks flipping over discretely pan overhead and from one side of the room to the other, generating an overwhelming and immersive hemispheric soundfield. Meanwhile, the score and songs fill in the quieter moments and bleed all around, keeping the story animated and constantly moving, while explosions, gunfire and roaring engines echo all around. 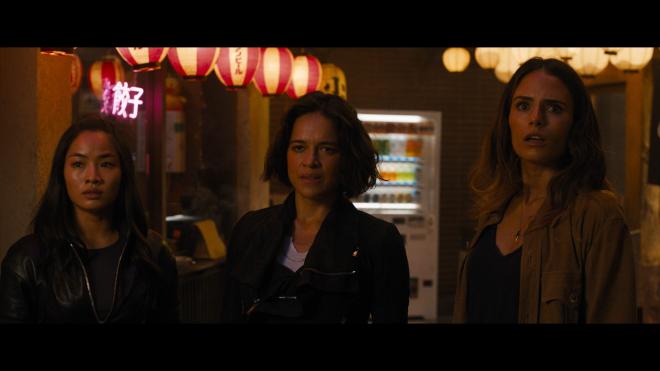 Thanks to the absurdly over-the-top but edge-of-your-seat visuals, the imaging continuously feels broad and expansive, as off-screen noises distinctly bounce across the entire soundstage. The mid-range maintains extraordinary detailing, reaching room-penetrating highs with crystal-clear clarity and superb distinction in the music and the vehicular mayhem. The dialogue is well-prioritized and pristine above the loud, tumultuous visuals. The low-end packs a serious oomph and potency to every explosion, gunshot and rumbling growl of engines while the songs and other effects dig deep into the lower depths on a couple occasions (bass chart), making for an amazingly fun ride to an otherwise middle-of-the-road actioner. (Dolby Atmos Audio Rating: 94/100)

Along with both cuts of the movie, the UHD disc contains the same set of supplements as the accompanying Blu-ray

With the return of Justin Lin as both director and writer, F9: The Fast Saga, unfortunately, lacks the same melodramatic silliness as its predecessors to turn the ear-deafening symphony of grinding metal into thrilling, brainless fun, ultimately making this a muddled, middle-of-the-road installment to the series. The Ultra HD Blu-ray screeches through the streets with a beautiful, souped-up 4K presentation in Dolby Vision HDR and an awesomely satisfying Dolby Atmos soundtrack revving the engine. The same body of supplements are shared between both formats, but the overall package makes for a Recommended ride for HDR junkies.