Pixar has long been known for crafting intricate thoughtful and emotional stories geared for kids that pack a wallop for adults. Their latest effort Luca is a fine film with imaginative visuals and a lot of great ideas going for it but doesn’t amount to the height of their best efforts in the home stretch. Luca arrives on 4K Ultra HD Blu-ray from Disney featuring a lovely and boldly colorful native 4K HDR10 transfer with a spirited Dolby Atmos audio mix and some decent if minimal extras. Recommended

Luca (Jacob Tremblay) is like any other sea monster in the ocean - fearful, but extraordinarily curious about life above the water and the humans that live there. His mother (Maya Rudolph) is strict and wants Luca to keep his mind on his chores while his aloof father (Jim Gaffigan) raises show crabs. When Luca discovers a trove of surface world objects, he bumps into the adventurous fellow child sea monster boy Alberto (Jack Dylan Glazer). Alberto shows Luca that when he climbs out of the sea onto dry land, his scales and tail disappear and he looks human! With Alberto, Luca’s mind is opened up to a whole world of possibilities like eating gelato, the fun of gravity, and best of all - riding a Vespa free as they please. But to get the money to buy their own ride, they need to beat all the humans and win the Portorosso Cup Triathlon! With the help of a spunky local girl called Giulia (Emma Berman), they just might have a chance. 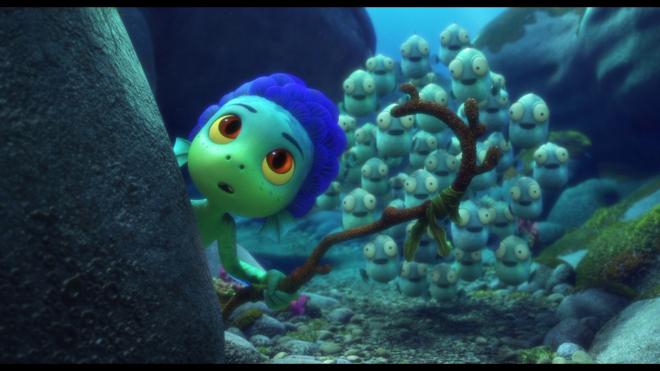 Pixar is one of the greatest animation studios. Time and time again they craft unique and splendid stories that entertain while also managing to blindside you with a wave of intense emotional resonance. Up, Toy Story 3, Soul - each of their films is a special blend of creativity that manages to touch an audience in unexpected ways. Their latest yarn Luca measures up to the task even if it hits a few stumbles in the home stretch of the race.

After a year of hunkering in my own tiny quarter-acre of this world avoiding getting too close to my neighbors, staying off social media, and just trying to survive - Luca is a splendid reminder that there is a world out there that needs to be lived and experienced. At least as safe as you can. Alberto telling Luca to silence his “Brunos” and just go for it as they ride down a mountain on a homemade Vespa towards a ramp propped up by a roaming turtle is a life lesson we kind of need right now. Silenzio Bruno and go jump off your own turtle ramp! You can still live your life while taking some basic safety precautions. You can trust your friends that they’re not putting your life at risk - or at least intentionally. If there’s a life goal you’ve put off - go for it and check it off the list.

While I loved this life lesson in Luca - I do have to admit that this isn’t among Pixar’s greatest films. It’s beautifully animated with delightfully cartoonish characters living in a near-photo realistic world, but the film tries to pack in too much plot into its simple story. Luca avoiding his parents trying to find his own way along with his newfound friends is an important piece of life that’s relatable to everyone. Eventually, your parents aren’t always going to be there and you’re going to have to be able to make your own decisions. But how this film gets to that message frequently stutters, stops, and stumbles at the home stretch.

Past Pixar movies were impeccably detailed in their world-building. Wall-E set up an entire world for the lovable little robot before the story and plot turns even kicked in. Here we’re just supposed to accept that an entire underwater world of sea monsters exist who could just as easily live above land without any real explanation. In fact we hardly see anything of this world aside from a brief moment at the very beginning. This film works as a sort of parable for gender fluidity but punts the ball when it could have gone for a touchdown. Luca has a thirst for knowledge but a late-in-the-game desire to go to school flummoxes an already stretched concept. The final act of the film is a bit of a hurried mess replete with cliches that just suck the emotional impact right out of its sails. What should be a dramatic moment isn't much bigger than a shoulder shrug.

That isn’t to say that Luca isn’t entertaining, just flawed. I had a great time watching this. It’s visually beautiful and Luca’s journey to discovering himself and where he stands in the world above or below the sea is delightful. I thought Sasha Baron Cohen’s Uncle Ugo was hilarious and needed a much bigger part - I’d have loved him to come to the surface world! And watching this with my one-year-old it was funny to see him laugh his head off at Luca’s little herd of bug-eyed fish.

Director Enrico Casarosa and his cowriters crafted an interesting world that just could have used a little more exploration. The story is wonderful and there’s plenty of visual wonder and splendor, but plot bumps upend a lot of the best moments the film has to offer. By no means is this the worst Pixar film out there; that’d still be Cars 2 for me. But after something as amazing as Soul, Luca was just a good way to pass the time instead of being something special I wanted to experience again and again.

Vital Disc Stats: The 4K Ultra HD Blu-ray
Luca arrives on 4K Ultra HD Blu-ray from Disney in a two-disc 4K UHD + Blu-ray + Digital set. Housed in a black keepcase with an identical slipcover, the disc loads to a language select menu before arriving at an animated main menu with traditional navigation options. All of the bonus features are found on the 1080p SDR disc. Luca is also available on 4K UHD Blu-ray in retailer exclusive packaging from Target and Best Buy 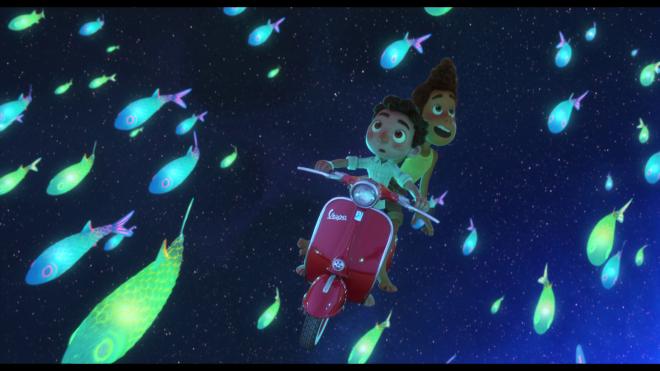 Luca finds a pleasing home on disc with a vivid 2160p native 4K HDR10 1.85:1 transfer. As has been the case with so many of Pixar’s films, this is a bright and colorful film. From the underwater world to the streets of Portorosso to Luca’s dreams - this is a beautiful show. I’ve always been impressed with Pixar's attention to detail and this round I was particularly impressed with skin texture details. This is especially the case for Luca, Alberto, and the other sea monster people. Their transitions from fish scales to human skin is a textural highlight. The moments where Luca or Alberto only partially get wet and the two textures blend is pretty great. I also loved all the small details throughout Portorosso - the weathered textured look to old bricks with a slightly moldery quality was a nice touch.

With HDR10 the image gets a boost over its SDR 1080p counterpart giving colors a lovely luminosity, stronger more natural whites, with some terrific deep black levels. This film has several “dream sequences” where Luca imagines the new world, riding a Vespa and encountering the anchovies of the sky and for these scenes, colors are purposefully over-saturated. There’s an additional spectral quality and the glowing lighting that is handled much better in 4K UHD over the 1080p Blu-ray.

All in all, this is another beautiful, bright, and boldly colorful film from Pixar and it makes a great appearance on 4K Blu-ray. Comparing it to the Dolby Vision streaming version on Disney+, I felt like the two were very similar. The Dolby Vision pass offered slightly better shadow and shading gradients for night scenes, or those dream sequences - anything giving off light and the subtle color shifts felt a little better rendered. However, it’s a regular issue anytime I stream anything, black levels always look a little blocky to me. If a scene is particularly dark, the disc presentation always wins - and that’s the case here. The final post-credit scene with Uncle Ugo is a prime example of this anomaly. While I wish Disney would support Dolby Vision on disc, this standard HDR10 treatment is a solid contender. 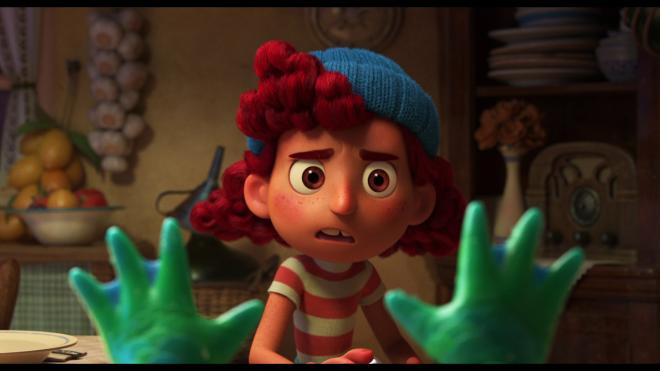 Kudos to Disney for supporting Atmos on a delightful little movie like this. It's not the most aggressive action-packed usage of Atmos but it works to good effect here. Past Disney Atmos tracks needed a volume boost, but I didn’t feel the need for that with Luca. The Front/Center channels handle most of the heavy lifting leaving the surrounds to set the scene whether it’s - above or below the water. Where the height channels come in is setting the feeling of space and imaging to the mix and how different the world of this film sounds above the water.

Below water, there’s a swirling slooshing sound of water movement that evaporates whenever the action moves to the surface world. When Luca or Alberto jumps from below the water to above this aspect is handled perfectly. Underwater the LFE gets a little extra rumble, not much, but it’s this slight pressurized sound that gives the two worlds sonic distinction. The Big Triathlon race is a great sequence giving this mix a nice stretch. When Luca and Alberto are riding their makeshift Vespa is another area where the mix really comes alive. Throughout dialog is clean and clear, imaging is precise with some great pinpoint object placement. Also, this film sports another excellent Dan Romer score that is a genuine treat. I wish Disney would get into the isolated score game. All around a great mix. 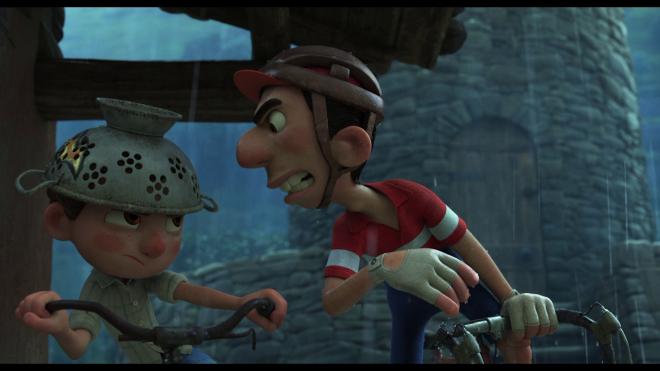 All of the bonus features for this release of Luca are found on the 1080p Blu-ray disc. What we have here is a pretty typical mix of materials. Some fluff, some informative bits for about an hour of total content. There’s not a lot of in-depth material here, pretty cursory but it’s worth picking through. The best segment is the deleted scenes which aren’t complete but more or less animated rough sketches and storyboards of sequences that didn’t make the final cut. 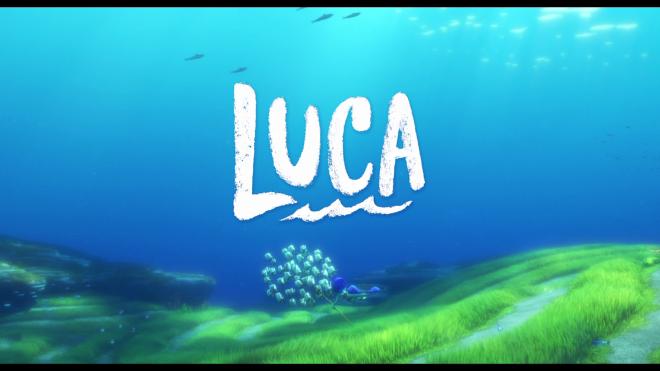 Luca is a fine film, it’s very entertaining with a lot of heart and like most Pixar films it’s got a few grand life lesions that play on a lot of levels. Unlike some of the best Pixar films, it stumbles in the final act with a conclusion that is all too neat and tidy. But, the ¾ of the film that came before is a delightful and beautifully animated adventure well worth checking out.

Disney brings Luca to 4K Ultra HD Blu-ray with impressive results. The native 4K transfer with HDR10 brings the fine details and bold colors to life while the Atmos mix is engaging and active in the best ways. Bonus features may be a bit light, but there’s some interesting stuff to check out there. If you’re ill-content only enjoying your Disney movies on their streaming service, this 4K UHD Blu-ray is certainly a solid release. Recommended.