Young lovers on a cross-country trip stop discover a town of murderous children in Fritz Kiersch's Children of the Corn, a B-movie horror adaptation of a Stephen King short story that remains mildly entertaining with plenty of chuckles and cheap thrills. Courtesy of Arrow Video as a single-disc, standalone edition, the cult folk-horror favorite worships at the 4K Ultra HD altar with a great-looking Dolby Vision transfer, a strong pair of lossless audio tracks but the same set of supplements as its Blu-ray predecessor. Nevertheless, the overall UHD package is a Recommended addition to the library and sure to make for a fun watch during a stormy Friday night this Halloween season.

Based on the short story from Stephen King's Night Shift collection, Children of the Corn starts off rather slow for a horror film and is a serious departure from its source, yet it amazingly retains some of the spirit of the original story, holding audiences with an amusing air of mystery and suspense. There is little doubt that the movie's greatest strength is due to the surprisingly sound performances, particularly from Linda Hamilton and Peter Horton as a young bickering couple on a cross-country trip to Seattle. They infuse some plausibility in their characters' predicament. Genuinely believing themselves to be in mortal danger from a bunch of kids with farm equipment is what keeps us from laughing when Courtney Gains's bloodthirsty henchman Malachai screams "Outlander" and John Franklin's fanatical boy preacher Isaac gives his sermons. The two young actors offer equally entertaining depictions of teenagers as fiery homicidal sociopaths.

Although heavily lacking in atmosphere, tension or frights, the thought of being chased by savage children eager to shed blood with sickles and machetes is nonetheless relatively creepy, and surely the reason for the adaptation's lasting popularity. But the plot also remains surprisingly relevant, touching upon a combination of public fears shared by most: the fear of religious fanaticism, the occult, radicalization and the danger of cults, only taken to the extreme by involving children. Burt's speech in the third act makes the story a fairly obvious reprimand of blind faith, which admittedly, borders on a contrived delivery that's more comical than sincere. It doesn't help that the movie is supported by some terrible special effects, even by 1984's standards, and modestly paced by Fritz Kiersch's hackneyed direction. Nevertheless, the brisk 90-minute feature remains a chintzy and somewhat fun affair but with a strangely perceptive and cautionary eye on religious fanaticism, monomania and the cult of personality. 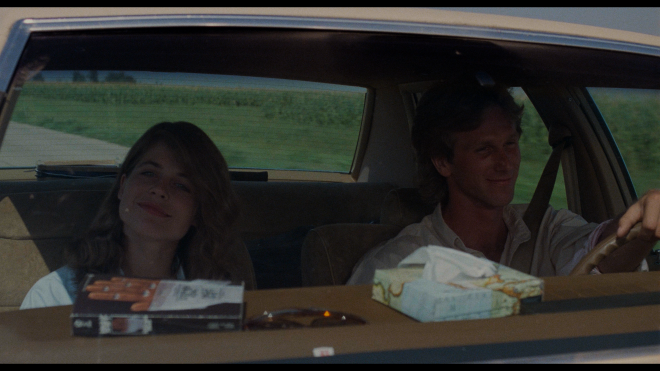 For a more in-depth take on the film, check out our review of the 2009 Anchor Bay Blu-ray HERE.

Vital Disc Stats: The Ultra HD Blu-ray
Fritz Kiersch's Children of the Corn escapes the grasps of religious fanatics courtesy of Arrow Video as a single-disc, standalone 4K Ultra HD edition. A Region Free, triple-layered UHD100 disc is housed inside a black, slightly thicker keepcase, which includes a flyer for Arrow Video's streaming service. The keepcase features new reversible cover art, a slipcover and a 28-page booklet with two informative essays: "Behind the Rows" by Children of the Corn historian John Sullivan and "Praise God! Praise the Lord!" by author and film historian Lee Gamblin. At startup, viewers are taken directly to the menu screen with full-motion clips and music playing in the background. 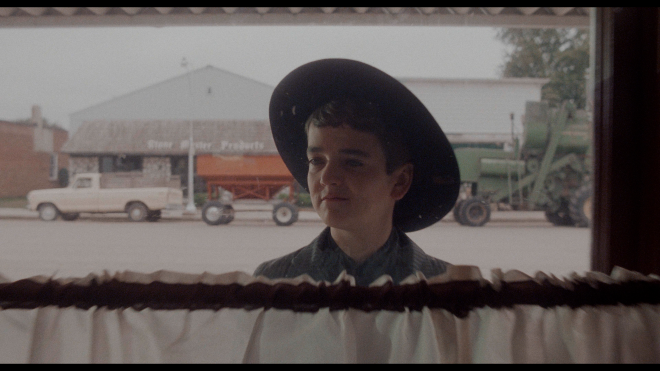 The cult horror favorite worships at the Ultra HD altar blessed with a great-looking HEVC H.265 encode, answering the prayers of devoted followers for a worthier sermon than its Blu-ray predecessors. Struck from a brand-new restoration and remaster of the original 35mm camera negatives, the native 4K transfer yields cleaner, better-defined lines throughout. Several scenes are striking and razor-sharp with distinct details in the clothing, the surrounding foliage and the exterior of buildings. However, a good chunk of the runtime is noticeably softer than its best moments with a few poorly-resolved sequences that can be pretty distracting. Most of the softness occurs during the poorly-lit interiors where the thin layer of natural grain is also more pronounced, but such moments are easily excused as the result of the photography and the age of the elements. Otherwise, the picture has an attractive film-like appeal that fans will love.

Nevertheless, the Dolby Vision HDR presentation offers other notable improvements, primarily in the wider color gamut. Primaries are sumptuously saturated with a dramatic pop, particularly reds looking more animated and eye-catching. Likewise, the softer secondary hues boast a bit fuller, more picturesque range between the fiery oranges and warm marigold yellows while facial complexions appear healthier with lifelike textures and a rosy peachiness around the cheeks. The 4K video also comes with stronger contrast and brightness balance even though João Fernandes's cinematography can seem somewhat limited at times. For example, black levels enjoy a small boost, looking richer and truer overall, but a few indoor sequences tend to look rather murky and dark gray, which can flatten the image a bit while still maintaining excellent shadow delineation. Whites fare better overall with a more vivid punch to them, and specular highlights are crisper and tighter, providing the 1.85:1 image with a more dynamic shine and better visibility in the hottest areas, such as in the flames of fire or sparkle along the car.

All in all, this is a marked improvement from its HD SDR predecessor with a good deal to admire and appreciate. (Dolby Vision HDR Video Rating: 78/100) 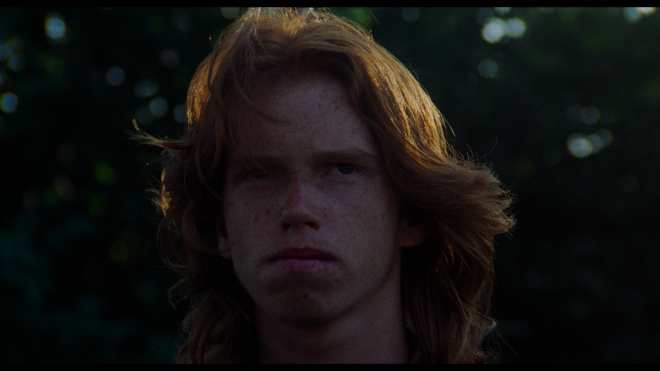 Outlanders run to home theaters with a pair of strong lossless audio tracks: the first in uncompressed LPCM 2.0 stereo and the second in DTS-HD MA 5.1 surround sound. According to the accompanying booklet, the original 4-track stereo soundtrack from the Dolby mag reels was used, and between the two options, I found myself preferring and enjoying the LPCM mix.

That is not to imply that the 5.1 surround track is terrible or deficient because it actually does come with some appreciable positives, such as the subtle atmospherics lightly heard in the side channels nicely expanding the soundfield. However, the music tends to be louder than the dialogue and occasionally bright, losing a bit of clarity in the upper ranges while also feeling obnoxiously overwhelmingly. Additionally, the bass noticeably runs hotter than it ideally should for a track of this vintage, sounding more boomy and vulgar than clean and refined. Aside from that, dialogue is intelligible, and the mid-range is relatively extensive with good distinction.

The stereo mix performs better where those same issues are not to be found. Displaying excellent movement and channel balance, the soundstage feels wide and welcoming with plenty of warmth and appreciable acoustical details in the upper frequencies. Likewise, the low-end sounds more natural and appropriate, providing the track with a proper weighty presence. The score enjoys cleaner definition and separation at a more suitable volume, and dialogue is well-prioritized over the music and action, making for a stronger, more natural listen. (Audio Rating: 72/100) 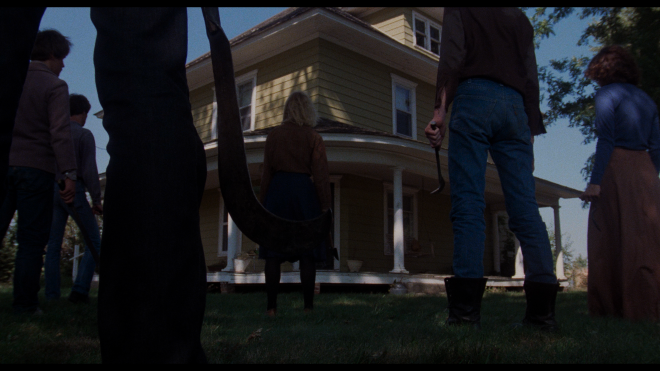 For this UHD edition, Arrow Video ports over the same set of supplements from their previous 2017 special edition Blu-ray. 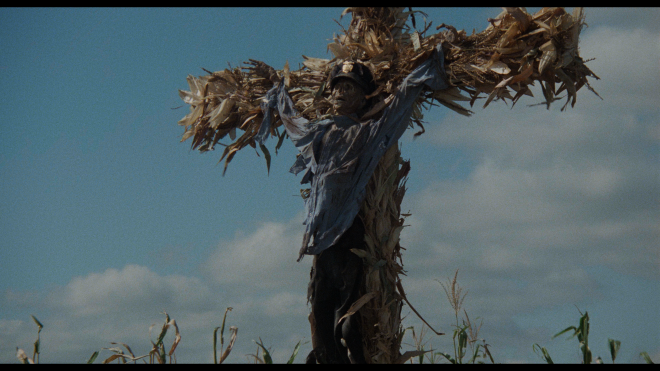 Though far from genre-defining or scary, Children of the Corn has spawned a strong cult following in a quarter of a century, which is surprising for a movie with so many faults. This low-budget adaptation of a Stephen King short story remains mildly entertaining as an admittedly, if not proud, B-movie horror flick, offering plenty of chuckles and cheap thrills. Courtesy of Arrow Video, the cult folk-horror favorite worships at the 4K Ultra HD altar as a single-disc, standalone edition with a great-looking Dolby Vision HDR presentation, answering the prayers of devoted followers with a satisfyingly beautiful upgrade over its Blu-ray predecessors. The video is complemented by a strong pair of lossless audio options and a nice set of supplements ported over from their previous HD release. Overall, the UHD package is recommended and should make for a fun watch during a stormy Friday night this Halloween season.