Jim Henson’s classic fantasy fairytale Labyrinth celebrates its 35th Anniversary on 4K Ultra HD Blu-ray with a new deluxe two-disc set from Sony Pictures with Digibook packaging. Now with Dolby Vision HDR, the transfer is a slight improvement over the already impressive 30th Anniversary Edition, the same excellent Atmos track, and some new extra features make this an attractive purchase for first-time buyers - but maybe not enough for a double-dip. Recommended.

A childhood favorite of 80s kids everywhere, Labyrinth was the perfect congruence of talent. You have the incredible creature work puppets and direction of Jim Henson, the imaginative creature design of Brian Froud, a screenplay by Monty Python’s Terry Jones, music by David Bowie, and executive produced by George Lucas. Great movies often implode with that many influences tugging at them, but Labyrinth is storytelling and visual creative harmony about one young woman traveling her own hero's journey. 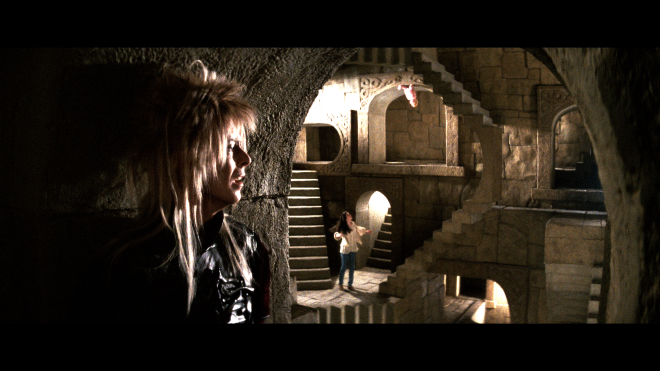 If The Dark Crystal was Jim Henson’s fantasy film largely geared for adults that kids might like, Labyrinth is a fantasy film for kids that adults could enjoy too. While there’s a dark thematic element at play, there’s plenty of kid-friendly humor to strike a balance. Sure, the creatures can be a bit scary - as dopy as those goblins are they are pretty freaky looking, but they're all harmless. Any amount of peril is well balanced. How do you not laugh when the fluffy dog Ambrosius runs across the farting rocks in the Bog of Eternal Stench?

I am an admittedly biased reviewer of this film. I don’t remember seeing this in theaters; I was four and my sister was nine so she has the better memories. I do remember torturing one particular babysitter with repeated viewings. I would only watch two movies as a kid, Labyrinth or Conan: The Barbarian and she’d rarely let me watch Schwarzenegger crush his enemies and see them driven before him. So it was a lot of Bowie and repeated viewings of the Dance Magic scene. To that point, this film is a true nostalgia trip for me. I don’t often watch it anymore, maybe once every couple of years but I’m glad it always holds up. It remains a magical journey and one I’m always willing to take. With the incredible creatures, the fun story, and Bowie at his 80s best, there's too much to love to waste time nitpicking little things.

For another point of view, read our review of the 30th Anniversary 4K Ultra HD Blu-ray

Vital Disc Stats: The 4K Ultra HD Blu-ray
Damn, I’m feeling old. Labyrinth 35th Anniversary Edition arrives on 4K Ultra HD Blu-ray from Sony in deluxe Digibook packaging with faux leather texture and plastic slipcover. Also included is the same 1080p Blu-ray as the 30th Anniversary set with a digital copy slip. The Digibook is 30 pages of photos, concept sketches, and pieces of the original screenplay giving you a little idea of how the project came about. The disc loads to Sony’s more standard menu instead of the cumbersome scrolling navigation system they used to employ. 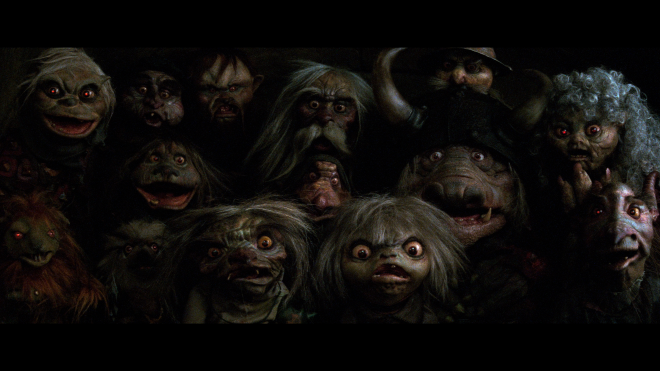 Labyrinth already had a pretty impressive 4K Ultra HD Blu-ray release five years ago, but Sony decided to sweeten the deal by offering up Dolby Vision HDR on top of the already impressive HDR10 pass. Truth be told, while there are some improvements, they’re modest and incremental. The overall image is a slight shade brighter giving some better balance to the darkest of scenes mitigating some of the slight crush issues the previous release could inch towards.

Spectral highlights and whites are a little crisper and pop a little better visually - the glow of the red eyes of the giant gatekeeper is a little more luminous. Blues and Reds are the main primaries that see a little more pop but not a dramatic color shift. Sarah’s blue jeans are a little bluer, her shirt is a little whiter, Ludo’s hair is a little more rusty colored - but again these aren’t huge differences. Dolby Vision is essentially doing what it’s supposed to do with dynamic metadata, making the slight adjustments scene to scene, shot to shot as stipulated. 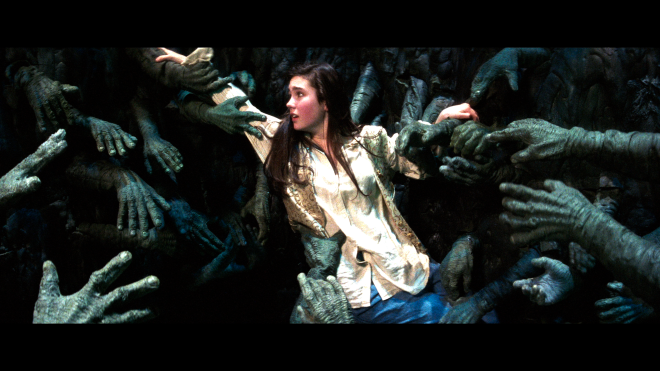 The image still maintains a natural film-like grain structure with robust details. Those details and grain presence can shift depending on the scene and how many optical effects there are - but that’s how the film’s always looked. The Chilly Down number with the obvious blue screen work still looks a little wonky and the M.C. Escher-inspired Within You sequence is a bit noisier with all of the process shots, but the improved black levels and contrast for that sequence gives the image a little more three-dimensional pop. Not a lot, just a little.

Again, I was already impressed with the 4K transfer of the 30th Anniversary Edition. I personally would have given that disc a 4/5 this new disc is only a modest improvement. If the same HDR10 only transfer had been used for this release, it’d still be perfectly satisfactory. For this round, I’m giving the 35th Anniversary Edition a 4.25/5 - better, but not by a wide enough margin to encourage a double-dip. This set is better suited for first-time buyers. 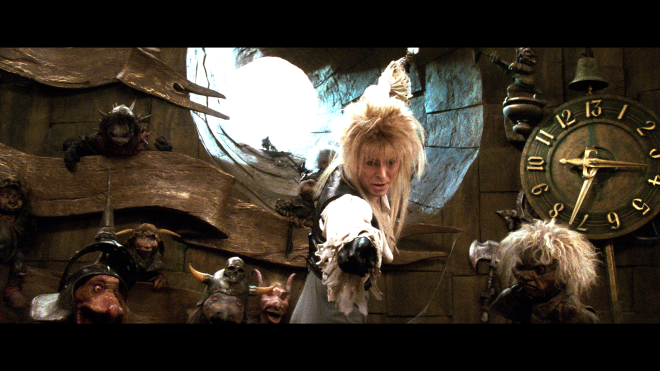 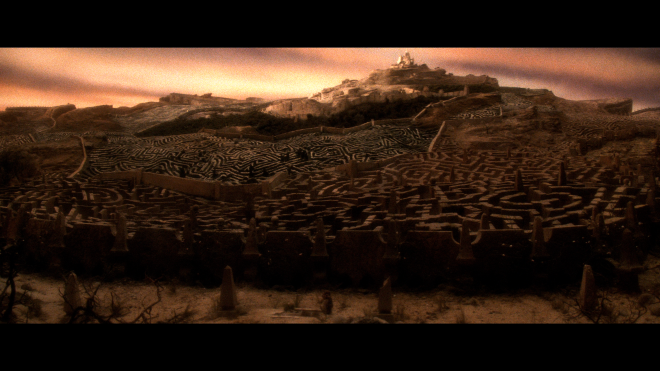 Now here’s where things get a little interesting. The 30th Anniversary 4K Disc had the Archival Brian Froud audio commentary from 2009 - this 35th Anniversary 4K Disc does not have that commentary. Instead, it trades in for a slew of deleted/extended scenes and a collection of screen tests of other actresses that had tried out for the role of Sarah. While it’s a bummer not to have that commentary on the 4K disc and only on the 1080p Blu-ray but at the same time, I’ve heard it and while it’s interesting it’s not one I think I’ll ever revisit. Some new material I’ve never seen before is a nice swap. The deleted scenes are sourced from what looks like a workprint VHS tape, but they’re cool to see how they trimmed the movie down or how different sequences played out - especially without Trevor Jones’ orchestral score. The alternate screen tests are especially cool - Trini Alvarado, Maddie Corman, Tracey Gold, Jill Schoelen, Danielle von Zerneck, Claudia Wells, and Molly Ringwald all had a shot at that part. 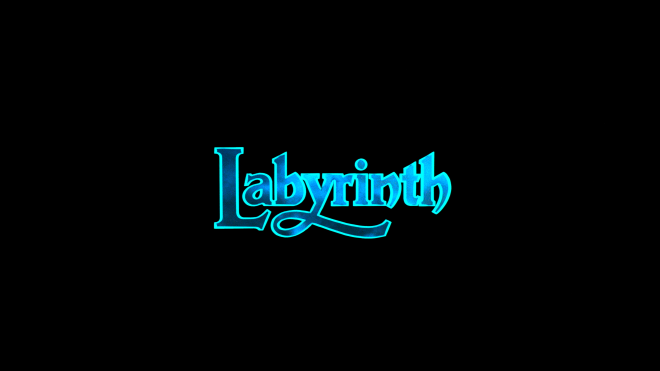 Labyrinth may not have been a huge hit at the box office, but it became a classic thanks to home video. I certainly played our tape to death - at least until an automatic rewinder ate it. Jim Henson’s incredible creature shop with Brian Froud’s designs, Terry Jone’s wild screenplay, and Bowie’s great tunes have kept this film living in the hearts of fans for 35 years.

To celebrate its milestone birthday, Sony has given Labyrinth a new deluxe 35th Anniversary Edition. Sporting a native 4K transfer now including Dolby Vision HDR, the disc offers only a modest improvement over the already very good 30th Anniversary Edition disc. Coupled with 26 minutes of deleted and alternate scenes and nearly an hour of screen test footage of other actresses - this is a pretty great set. However, if you already own the 30th Anniversary disc the slight image improvement, the new extras, and slick packaging probably isn’t enough to justify a double-dip. For newcomers on the 4K format looking to upgrade, definitely check this one out. Recommended.