John Krasinski's A Quiet Place Part II is another exceptionally terrifying creature feature driven by an emotional, character-driven plot, featuring outstanding performances and even more white-knuckle, anxiety-inducing suspense. The sequel breaths a sigh of relief and silence on Ultra HD with an excellent 4K video presentation, a reference-quality Dolby Atmos track but a disappointing set of bonuses. Nevertheless, the overall SteelBook package is a Highly Recommended addition to the UHD library.

The opening moments of A Quiet Place Part II play out in similar fashion to its predecessor where audiences are nonchalantly given a brief tour of a peaceful, all-American town. This is the quiet before the storm, so to speak. Only this time, what appears to be a deserted town is actually townspeople gathered at the local baseball game, which is interrupted by an invasion of armored-skin aliens with hypersensitive hearing. The once tranquil, idyllic town suddenly erupts into thunderous, ear-splitting pandemonium. And this, I'd argue, is where John Krasinski's sequel not only comes into its own but announces itself as something new despite still being more of the same. Previously, the level of silence at the start was as overwhelming as it was nerve-wracking. But this time, we're there with Krasinski's Lee Abbott and his daughter Regan (Millicent Simmonds) at the restaurant practically yelling for silence.

Ultimately, it's a thrilling, outstanding prelude that feels like a different take on a familiar start, one that also immediately sets the tone for the rest of this direct follow-up, which was written, produced and directed by Krasinski. After those tense few minutes, we're back at the Abbott farmhouse over a year later, picking up exactly where we left off. With deaf teen Regan, timidly panicky Marcus (Noah Jupe) and a newborn son in tow, the newly widowed Evelyn (Emily Blunt) searches for a more secure shelter, as well as other survivors. As any good sequel should, Krasinski makes it known that he's not simply going to repeat what worked in the first movie, which is the common plight of most sequels. But instead, his story is an extension of it, expanding on those events and confronting their repercussions while venturing into the post-apocalyptic world he brilliantly built three years earlier. 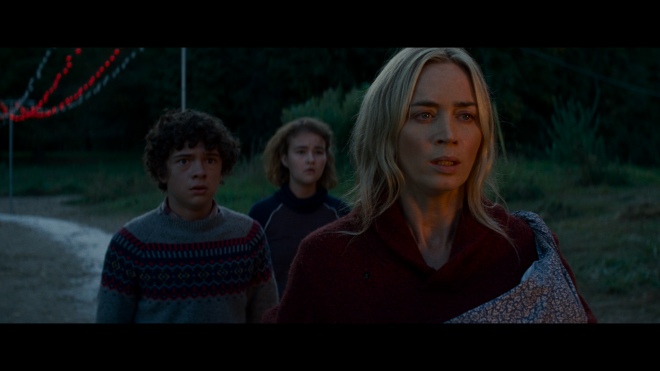 Granted, it doesn't feel that way when Marcus is injured and the family takes refuge at an abandoned steel foundry. There, they find family friend turned reclusive hermit Emmett (Cillian Murphy) surviving alone after losing his family by hiding inside an air-tight bunker. The timer and towel over the latch are clever visuals clueing viewers to that fact without ever directly saying it, which again goes back to the amazing talents of Krasinski and his production team. It is also a masterly clever means for hinting at this film's thematic motif. Whereas part one made us acutely aware of every sound and had us longing for quiet, Part II now has us holding our breaths and begging for a moment of reprieve. No other moment best captures this than when Marcus accidentally locks himself in Emmett's bunker, watching with bated breath at the relentless onslaught outside and the chaotic panic to survive inside.

There is a notable sense of maturity and sophistication in Krasinski's direction, as well, one where the camerawork feels more restrained and unobtrusive. Working with editor Michael P. Shawver, Krasinski makes excellent use between the long takes and some rapid-fire edits, generating unbearably tense moments that also unfold and play out naturally. Whether it's characters slowly skulking into a radio station or attempting to outsmart a group of feral humans, the audience becomes helpless witnesses to the white-knuckle suspense and the anxiety-inducing tension. It's all masterfully done to allow Lee and Evelyn's kids to step up in the fight and come into their own — Marcus overcoming his debilitating fear while Regan refuses to be hindered by what others perceive as a liability. A Quiet Place Part II is a brilliant and exhilarating follow-up, that rare sequel that is every bit as good as its predecessor. 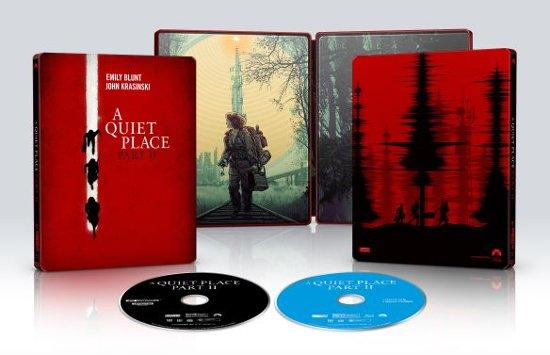 Paramount Home Entertainment brings A Quiet Place Part II to Ultra HD Blu-ray as a two-disc SteelBook combo package with a Digital Copy code. When redeeming said code at paramountmovies.com, owners unlock 4K UHD streaming rights with Dolby Vision HDR and Dolby Atmos audio on their preferred streaming provider. The dual-layered UHD66 disc sits comfortably atop a Region Free, BD50 disc on the same panel, and they are housed inside a blood-red SteelBook package with silhouettes artwork from specific moments in the movie. A standard keepcase with slipcover edition is available. At startup, viewers are taken directly to a silent static menu screen with the usual options along the bottom. 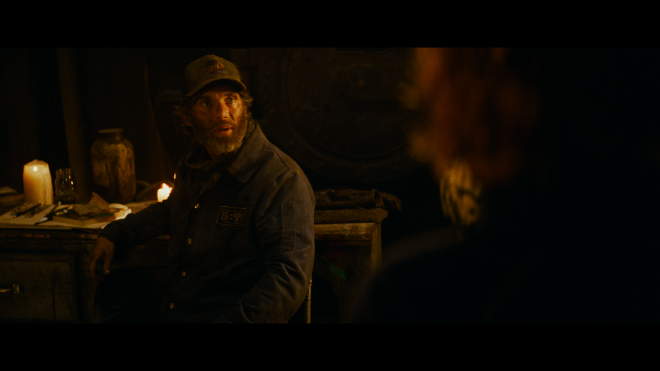 The sequel breaths a sigh of relief and silence on Ultra HD outfitted with an excellent and highly-detailed HEVC H.265 encode. Struck from a 35mm source, except for a few digitally shot sequences, and later mastered to 4K digital intermediate, the freshly-minted transfer comes with clean, sharp lines in the wood grain of some buildings, the individual leaves and blades of grass, and the stitching of costumes. The grimy, damp rust in the factory looks particularly gooey, and the textures in the fabric of clothes and in the faces of the cast are often striking and lifelike. A few extreme long shots noticeably dip in resolution and look a bit blurry, but overall, the picture is consistent, awash with a very fine layer of natural film grain throughout. With inky, true blacks and silky, stygian shadows that penetrate deep into the screen without obscuring visibility in the darkest corners, the 2.39:1 image comes with outstanding dimensionality and a lovely cinematic appeal.

Following the same aesthetic style as its predecessor, the native 4K video displays a slightly warmer yet controlled contrast balance, affording the visuals with a more balmy, summery feel but causing some of the hottest areas to lightly bloom a smidge. Nevertheless, whites are crisp and clean throughout, and specular highlights supply a resplendent glow to various light fixtures, firepits and a glistening sparkle to light reflecting off metallic surfaces and the water, such as the nighttime scene at the marina. The Dolby Vision HDR presentation also bathes the action in a rich array of comforting, homely earth tones, summerlike oranges and sultry yellows, particularly the scenes under the factory. Meanwhile, the greens of the surrounding foliage are dynamic and lively, and the reds display impressive variation, from the garnet and brick shades of the rust to the vibrant crimson cherry of some articles of clothing. 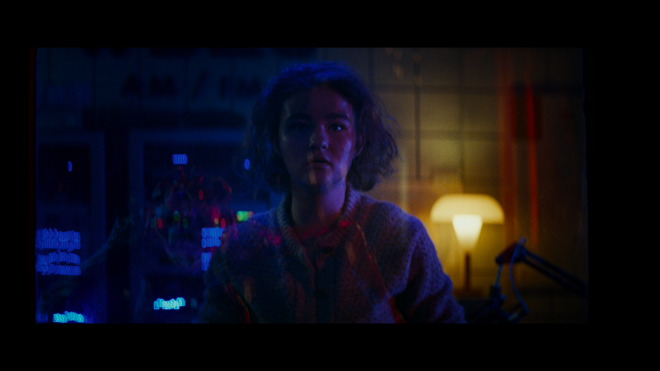 Like the first movie, the direct follow-up is equipped with another fantastically thrilling, reference-quality Dolby Atmos soundtrack. Once again, the design creatively utilizes silence and noise with various ambient effects endlessly occupying the surrounds and the ceiling channels. The rustling of leaves, birds chirping or crickets singing are continuously heard in the distance, sometimes very subtle while at other times, fairly blatant. The best moments are those with the creatures, either on the prowl or attacking one of the characters. While hiding at the restaurant in the beginning, the alien flawlessly pans in the rears from one side of the room to the other, and during the chaos, they are jumping from every direction. When Evelyn combats one of the creatures at the factory, the water from the sprinklers rains down from above the listening area, adding to the splendidly immersive hemispheric soundfield.

Many of those same effects, along with the hauntingly memorable score of Marco Beltrami, also incessantly dominate the three front channels and top heights. With exceptional clarity and convincing movement into the off-screen space, imaging maintains a broad and spacious soundstage from start to finish while also delivering precise and intelligible dialogue with remarkable intonation in each performance. The mid-range is extensive with superb detailing and clean distinction in the deafening howls and echolocation clicks of the creatures, and Beltrami's music enjoys outstanding warmth and fidelity amid the ear-piercing chaos. The low-end is impressively robust and potent, providing the aliens with a palpable, authoritative presence that's terrifying. A few times, the bass digs into room-energizing ultra-low depths, down to the 20-22Hz range at high decibels, sending some couch-shaking waves that'll surely give the subwoofer a healthy workout (bass chart). (Dolby Atmos Audio Rating: 96/100) 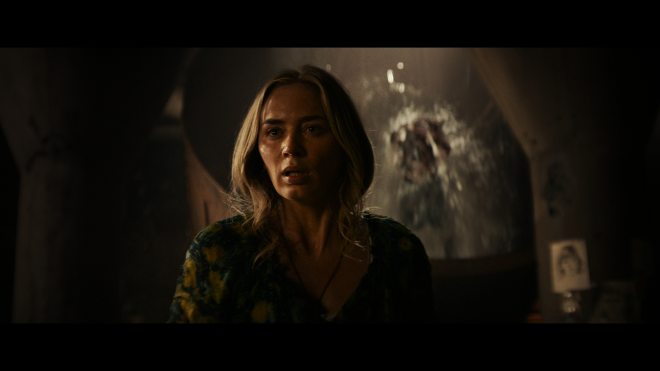 All the supplements are contained on the accompanying Blu-ray disc. 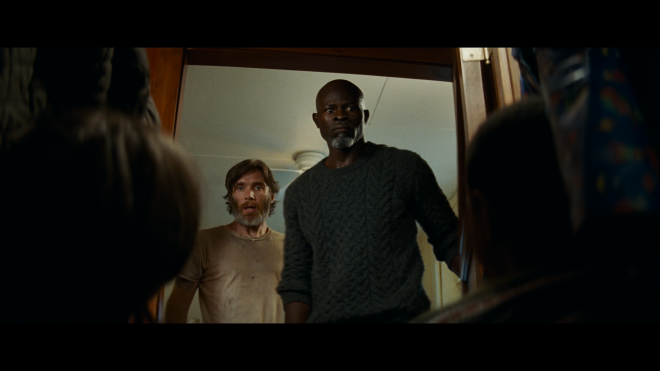 Writer and director John Krasinski delivers another exceptionally terrifying creature feature in A Quiet Place Part II, which picks directly where the first film left off. And like its predecessor, this follow-up is another emotional journey that expands on the world he built three years ago, allowing for the characters to grow while also incredibly raising the anxiety-inducing tension, making it that rare sequel that's every bit as good as the first. The sequel breaths a sigh of relief and silence on 4K Ultra HD, outfitted with an excellent Dolby Vision HDR presentation and an awesome, reference-quality Dolby Atmos soundtrack. With a sadly disappointing set of supplements, the overall SteelBook package is nonetheless is Highly Recommended.