An artfully-crafted and cleverly designed horror film driven by intense white-knuckle suspense from the talents of John Krasinski, A Quiet Place is actually a drama about overcoming a family tragedy told in the guise of a horror movie. Just in time for the upcoming sequel, the film escapes detection in a special Mondo X SteelBook Ultra HD edition with the same lovely Dolby Vision HDR presentation, superb demo-worthy Dolby Atmos track but a disappointing set of bonus features. Nevertheless, the overall SteelBook package is Highly Recommended.

A Quiet Place is an artfully-crafted and cleverly designed horror film from the unexpected imagination of John Krasinski, better known for playing the lovable prankster Jim Halpert on The Office. In this exceptionally well-told tale about a family struggling to survive humanity's extinction, he demonstrates a perceptive aptitude for white-knuckle suspense that's emotionally-driven and harrowing. Not only does Krasinski expertly set and maintain a gripping tone, but he and his team of talented filmmakers also ground the story with verisimilitude in a matter of minutes, which is pretty remarkable. Although expositional details are supplied visually with a few cunningly designed auditory cues, we're kept in the dark of why this family is vigilantly and persistently quiet, immersed in an unusually heaping amount of silence establishing an unsettling atmosphere of apprehension, a thick air of dread that generates both fear and curiosity.

It's a strikingly innovative approach for pulling audiences into this reality. When the silence is finally broken, we immediately understand the danger without realizing we also forgot to breathe during the most dreadful, nail-biting moments. And lurking beneath the surface is also the profoundly central theme: the endless ordeal of being a parent — the constant, never-ceasing fear of failing to protect one's child. Krasinski's film is actually a drama about overcoming a family tragedy told in the guise of a horror movie, about a loss that can scar everyone deeply and possibly lead to a festering wound that could infect the well-being of the entire family if left ignored. The family lives an existence where they can't talk, basically forced to ignore their problems and never truly allowed the opportunity to grieve or address the pain they're suffering. Understood this way, the poignant story becomes all the more heartbreaking in those brutally gut-wrenching final moments. 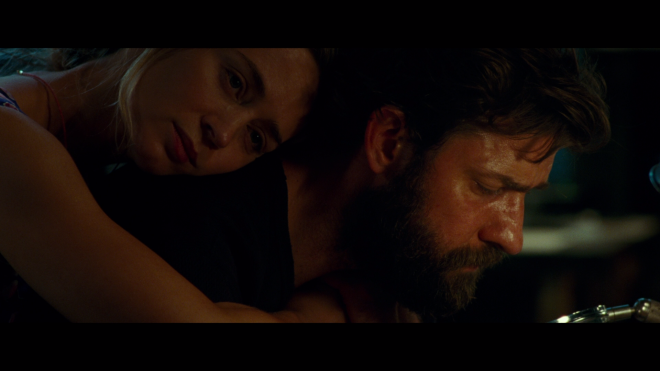 For a more in-depth take on the movie, you can read our coverage of the 2018 Blu-ray HERE.

Paramount Home Entertainment brings A Quiet Place to Ultra HD Blu-ray as a two-disc combo package dubbed the "Mondo X SteelBook" edition (spine #038). The dual-layered UHD66 disc sits comfortably atop a Region Free, BD50 disc on the same panel, and they are joined by a flyer with a Digital Copy code unlocking 4K UHD streaming rights with Dolby Vision HDR and Dolby Atmos audio. Both discs are housed inside a flat-black and blood-red package with artwork Matt Ryan Tobin's poster of the iconic string lights and a plastic, transparent slipcover. At startup, viewers are taken directly to a static menu screen with the usual options and music.

The dread and apprehension of silence makes a home on Mondo X SteelBook with an identical lovely and great-looking HEVC H.265 encode as the 2018 Ultra HD edition, providing a notable and more than satisfying upgrade. With that said, I'll simply repeat my same thoughts as before.

Coming from a 35mm source that was later mastered to a 2K digital intermediate, the freshly-minted 2160p transfer is highly-detailed for a majority of the runtime, exposing each grain of sand and the tiny clumps of dirt along the family's hiking path. Individual hairs and leaves sway in the wind distinctly, the fine lines and wood grain of the house and the bark of trees are striking, and the stitching and threading in the clothing are very well-defined. However, as with the 1080p version, there are a few moments that noticeably dip in resolution, most of which are extreme long shots and likely the result of the creative choices in the cinematography, but they are more apparent and somewhat distracting here. Nevertheless, a visibly thin and stable grain structure, which can be a bit more prominent during several wide shots at night, which is a big chunk of the movie, provides a beautiful film-like quality.

Presented in its original 2.39:1 aspect ratio, the 4K presentation comes with a slightly warmer than normal contrast balance, which tends to lightly bloom some of the hottest areas. For all intents and purposes, this appears to be a deliberate visual style meant to reflect the family's hot country surroundings and appears faithful to what I remember seeing in theaters. In either case, whites are crisp and beaming, enough to make some squint at the screen as the sun's rays or flashlights shine directly into the camera. Specular highlights are quite as dramatic due to the filmmaker's creative choices, as the brightest spots are any more revealing, but the light reflecting off the edges of various surfaces are resplendent and glisten with intensity, particularly in those sequences with cloudy, overcast days like the scene with dad giving Regan a new cochlear implant.

Charlotte Bruus Christensen's cinematography also slightly skews the film's teal-orange palette, which is made all the more apparent in Dolby Vision, arguably making this HDR version an accurate reflection of those artistic preferences. Perfectly reflecting the hot, sunny summer climate of the region, the screen is continuously bathed in vividly sultry yellows and comforting, homely earth tones while the greens in the surrounding foliage are livelier and more animated. More emphasis is placed on the secondary hues where viewers can better appreciate the beautiful array of balmy oranges, soft pinks and velvety violets blending into dark magentas and the deep indigo blue of the night sky, turning twilight sunsets into stunning picturesque landscapes. Of all the primaries, reds receive a generous boost, showering the last quarter of the movie with a hauntingly dramatic crimson glow while blood is a deeper shade of garnet and ruby.

Thankfully, brightness levels are not affected by the stylized photography, which is important in a movie mostly unfolding at night. Deeply rich and silky blacks are in abundance and show distinct gradational differences between the various shades, providing the image with appreciable dimensionality. Meanwhile, inky, dismally bleak shadows penetrate deep into the background, but sadly, the finer aspects are occasionally engulfed by the pitch-black darkness. On the majority, this is not an issue of concern, but it does happen from time to time and worth noting. (Dolby Vision Video Rating: 84/100)

The fight for survival breaks the silence with the same fantastically thrilling, reference-quality Dolby Atmos soundtrack as the previous UHD, taking full advantage of the object-based format. To be fair, the design creatively utilizes silence and noise for generating a particular aural experience. It's not meant for bombarding the audience with the typical chaotically frightening mayhem expected of the genre, of which there are a few, but for creating an authentic environment with a continuous sense of dread and apprehension. So, various ambient effects, like the rustling of leaves, birds chirping or crickets singing in the distance, are endlessly occupying the surrounds and the ceiling channels, providing a splendidly immersive hemispheric soundfield. Better still, the best demo-worthy moments are those when the creatures are on the prowl or to give a greater sense of their menacing size. Their hungry growls and slow, determined footsteps flawlessly pan from the sides and rears into the back heights and continue directly overhead into the fronts.

For a movie with a carefully orchestrated audio design emphasizing silence, the screen feels endlessly alive with lots of background activity and bustling with a variety of atmospherics that convincingly travel into the off-screen space. Many of those same effects and the ominous music of Marco Beltrami spreads across the three front channels and top heights, generating a highly engaging and spacious half-dome soundstage that never seems to give the listener a true moment of peace. An extensive and dynamic mid-range exhibits superb clarity and definition during the loudest, ear-piercing moments, revealing exceptional distinction in the deafening howls of the creatures and their echo-location clicks while also delivering outstanding warmth and fidelity during the quieter sequences. The few bits of dialogue are precise and intelligible with remarkable intonation while an appreciably robust and often wall-rattlingly aggressive low-end provides a great deal of presence and weight to the creatures, occasionally sending a couch-rumbling boom that nicely energizes the entire room. (Dolby Atmos Audio Rating: 96/100)

An artfully-crafted and cleverly designed horror feature, A Quiet Place is a quietly layered film with poignant underlying concerns shrouded in the innovative idea of never talking, a drama about overcoming a severely-wounding family tragedy told in the guise of a horror movie. Writer and director John Krasinski splendidly captures and expresses parental anxieties as terrifyingly grotesque monsters threatening the security of home, making it one of the best horror films of recent memory. The film tries to escape detection on 4K Ultra HD with a lovely Dolby Vision HDR presentation that offers a notable improvement over its HD SDR counterpart and a superbly thrilling, demo-worthy Dolby Atmos soundtrack. Just in time for the upcoming sequel, Paramount Home Studios repackages the extraordinary film as a Mondo X SteelBook edition with the same lackluster set of supplements. The overall package is nonetheless highly recommended for horror-hounds, UHD enthusiasts hungry for more HDR goodness and audiophiles ravenous for a satisfying aural experience.