Two of cinema's most revered and iconic monsters duke it out in Godzilla vs. Kong, a surprisingly satisfying blockbuster littered with spectacular visuals and sensational thrills. The monster flick wreaks absolute havoc on Ultra HD with a gorgeous 4K video, a demo-worthy Dolby Atmos track but a rather disappointing collection of bonuses. Nevertheless, the overall UHD package makes a Recommended addition to the 4K library.

Two iconic monsters clash for absolute supremacy in the fight of the century simply dubbed Godzilla vs. Kong, the fourth installment in the larger shared franchise series known as the MonsterVerse. As a King Kong fan, my money was on the chest-pounding Eighth Wonder of the World to easily dominate a ginormous radioactive lizard. You know, that whole opposing thumbs, tool-making, and evolution stuff giving the advantage to a gigantic gorilla that can literally coldcock any opponent with a good right hook or pretty much turn any nearby object into a deadly weapon. The odds were riding on the massively muscular ape walking into a fight like a heavyweight boxer in their prime and can do more than use its tubby body to shoulder shove, whip someone with its tail, or light up its spine to blow its hot breath. This is essentially like watching Butterbean vs Tyson and just as difficult to predict a definitive winner.

However, in this plot by Max Borenstein, who has been a part of the franchise since Godzilla, and longtime MCU writer Eric Pearson, a clear champion is pretty much declared by the third act, or at the very least, strongly suggested. Naturally, the confrontation is not without some amusing buildup and lots of hype surrounding their inevitable showdown, littering the screen with other smaller but visually captivating bouts. For one, the detour to the Hollow Earth was surprisingly more fun than expected, generating more mystery to Kong's mythos while also expanding on the MonsterVerse with interesting possibilities. And at heart, this is the reason for watching this mash-up in the first place. Thankfully, the many CG visuals throughout are impressive and inventive, complemented by Adam Wingard's strong direction and Ben Seresin's vividly colorful cinematography bathing the earth-shattering action with animated energy and urgency, making the 113-minute runtime a satisfying feast for the imagination. 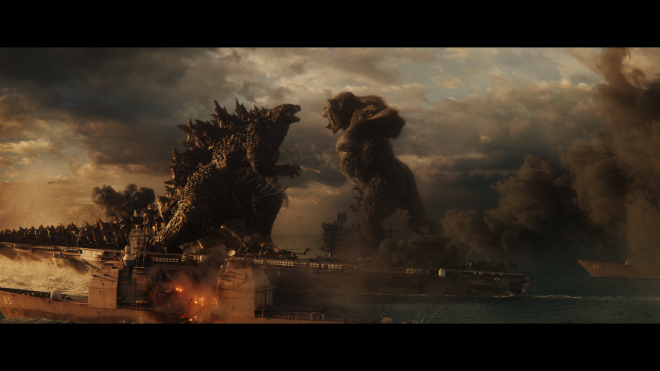 Of course, there are some humans involved as well, but their actions — either born of some pompous self-importance or dumb decisions with lucky coincidences — are ultimately at the service for shaping and guiding events to the monstrous confrontation. Basically, their stories are the undercard bouts to the main event with the Scooby-Doo adventures of Millie Bobby Brown, Brian Tyree Henry, and Julian Dennison supplying the primary mystery that brings the horror icons out of hiding. Henry's conspiracy theorist and Dennison's timid computer nerd are an absolute delight together, injecting the right amount of contrast and humor to Brown's determined seriousness, who sadly falls flat in this third sequel. Alexander Skarsgård is arguably of more interest, as his involvement carries a quasi-redemption aspect that is more emotionally engaging than his tag-along partners, Rebecca Hall's Monarch scientist and her adoptive daughter (Kaylee Hottle) — neither of which add significant value.

At the center of both subplots is the most obvious, mustache-twirling villain Demián Bichir's CEO of a tech organization searching for the solution to what he deems as the "Titan problem." Unfortunately, outside of setting the stage for the fight, he's too much of a conventional, two-dimensional baddie to really be of notable interest. Granted, along with his right-hand henchman (Shun Oguri), his rather boringly archetypal obsession with the iconic behemoths leads to the introduction of another mecha legend to the franchise, which is an admittedly welcomed although still laugh out loud twist for the third act. In the end, and in spite of its weaknesses, the blockbuster monster flick comes together surprisingly well and satisfies expectations with the sort of sensational thrills and spectacular visuals expected of such popcorn spectacle while also being another great installment to the franchise.

For another take on the film, check out our theatrical review HERE.

Vital Disc Stats: The Ultra HD Blu-ray
Warner Home Video brings Godzilla vs. Kong to Ultra HD Blu-ray as a two-disc combo pack with a Digital Copy code. When redeeming said code via wb.com/redeemmovie or MoviesAnywhere, users are granted access to the 4K digital version in Dolby Vision with Dolby Atmos audio on various platforms. The dual-layered UHD66 disc sits comfortably opposite a Region Free, BD50 copy, and both are housed inside the standard black, eco-elite keepcase with a glossy slipcover. At startup, the disc goes straight to a static main menu screen with the usual options along the bottom and music playing in the background.

Shot exclusively on the Arri Alexa camera system and mastered to a 4K digital intermediate, the 2160p picture is at its best during the live-action sequences, showing clean, distinct lines in the various buildings and exposing every nook and cranny from a distance. Individual hairs are highly detailed, for the most part, especially in people, while Kong's many scars and Godzilla's scales are discrete and plainly visible, even during some of the fast-paced action scenes. However, being a CG-heavy movie, many of the visual elements, unfortunately, come with a couple of observable setbacks, starting with faint instances of aliasing along the sharpest edges of either vehicles, buildings or Kong's hairs. On top of that, there are hints of mild, near-negligible noise in those same hairs whenever the camera pans around Kong. But aside from that, the native 4K video remains in excellent shape.

The most striking and captivating aspect of this Dolby Vision HDR presentation is undoubtedly the spectacularly vibrant assortment of colors throughout. The sunsets shower the screen in a stunning array of golden yellows and marigold oranges mixed with beautiful rouge pink hues, soft cerulean blues in the sky and deep ocean teals in the water. The best moments are those bathed in the sumptuous glow of various secondary hues and the richly saturated range of primaries, like the deep crimson reds in the costumes and the ruby rose of a certain mechanical giant and the dark indigos of the night sky. Ben Seresin's cinematography is simply gorgeous and dynamic, from the hot fuschia pinks, dynamic lilac purples and chartreuse greens in the neon lights of Hong Kong to the electrifying arctic blues in Godzilla's dorsal spines and atomic breath. Meanwhile, facial complexions appear healthy with lifelike textures and natural, rosy-peach tones in the cast.

The freshly-minted transfer continues to impress with an outstanding contrast balance that further complements Seresin's stylized, orange-teal photography. Overall, the video is slightly more on the controlled and subdued side, but whites nonetheless shine with dramatic vigor throughout, which is especially impressive during the action sequences. In fact, the specular highlights supply a tight, narrow glow in the electrical sparks and explosions, the various neon lights and digital monitors, and the bright daylight exteriors with the scenes of the Hollow Earth serving as demo-quality material. All the while, some of the finer details within the hottest spots remain plainly visible and discrete, such as Godzilla's dorsal spines, Kong's light-up ax and in the glowing eyes of that aforementioned mecha giant. On the opposite end, black levels are true and inky rich with extraordinary gradation between the various shades, like in Kong's hairy body. With excellent delineation in the blackest, darkest shadows, the 2.39:1 image debuts with a great deal of appreciable dimensionality and a lovely cinematic appeal that's sure to please.

Finally, it is worth noting that this UHD edition also features the HDR10+ metadata for those with the capabilities. (Dolby Vision HDR Video Rating: 92/100) 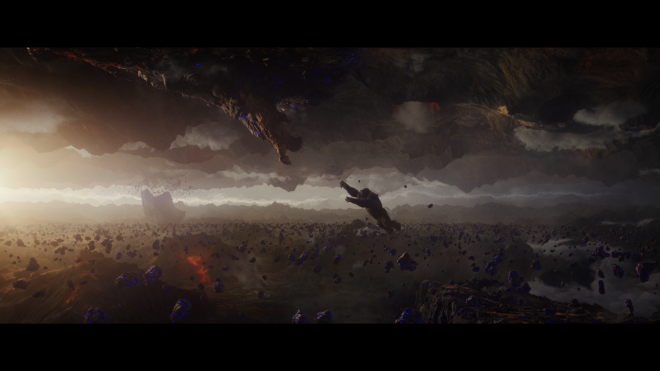 Titans rumble in the Ultra HD arena with a phenomenal, reference-quality Dolby Atmos soundtrack that'll rock the foundation of home theaters with a crunching, authoritative low-end. Every stomp, roar, explosion and collapsing building shakes the couch and rattles the walls with thunderous, room-energizing low-frequency effects that dig hard into the low 20Hz range at high decibels (bass chart). While adding an impressive sense of presence to the enthralling visuals and the explosive action, the bass also supplies Tom Holkenborg's score with terrific weight and depth, displaying excellent fidelity and separation in the orchestration.

All the while, an extensive mid-range maintains outstanding definition and detailed clarity for the most part, except there are few minor instances of clipping and mild distortion in the higher frequencies. Thankfully, it's nothing too egregious to ruin the overall quality, but coming off a bit bright in some spots is worth noting to knock it down a couple of points from perfection. However, amid the chaos and sheer pandemonium, vocals remain precise and well prioritized.

The real win is ultimately the continuously employed surrounds in this object-based mix, starting with the music bleeding into most of the channels with often striking distinction in the horn section feeling as though blasting from a higher area above the screen. Other background activity bounces and flows between the fronts and top heights with amazing ease, creating a highly engaging and convincingly expansive soundstage. The sound of wildlife, such as inside Kong's containment home or the Hollow Earth, is heard from every direction. Action visuals are layered with debris raining down from above, and various other atmospheric effects flawless pan all around and overhead, generating an immersive hemispheric soundfield that places viewers in the middle of complete anarchy. (Dolby Atmos Audio Rating: 96/100) 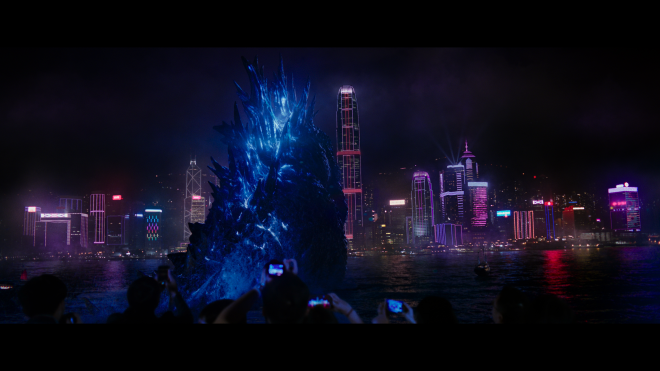 The only shared supplement between both formats is the audio commentary. The rest of the bonus material is housed on the accompanying Blu-ray disc. 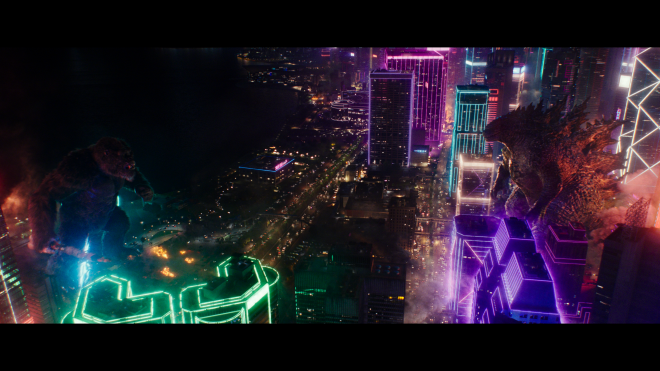 Littered with the sort of spectacular visuals and sensational thrills we'd expect from such a popcorn spectacle, Godzilla vs. Kong is a surprisingly satisfying installment to the franchise. Although thin on plot and characterization, the monster flick nonetheless works and delivers on the blockbuster spectacle promised, making it the enjoyable mindless escapism needed after a year of lockdowns and closed theaters. The iconic monsters wreak absolute havoc on 4K Ultra HD with a notably gorgeous Dolby Vision HDR presentation and a phenomenal, reference-quality Dolby Atmos soundtrack. With a rather disappointing collection of bonuses, the overall UHD package nonetheless makes a recommended addition to the library.