The king of all monsters' 2014 reboot Godzilla from director Gareth Edwards finally battles 4K Ultra HD Blu-ray with impressive results. The first Blu-ray and 3D Blu-ray releases suffered from some impenetrably dark scenes and now with the upscaled 4K transfer with HDR10, we not only see some improved resolution, but those black levels are vastly improved topped off with a room-shudderingly great Atmos audio mix. No new bonus features and the included 1080p Blu-ray has not been remastered - but this 4K disc is well worth the upgrade and essential binge material before Godzilla vs. Kong hits theaters and HBO Max. Recommended

While I agree with parts of what Michael said in his original review, I actually like that this film pulls back on the Godzilla vs MUTO action. As he says we're ants to the big guy so we're only given perspective glimpses of him until it is absolutely essential that the audience see him in all his glory - even if occasionally it does look like he's spent the last few decades watching daytime tv and swilling beers. Not to body shame a 390-foot monster, but he hasn't been doing his crunches. 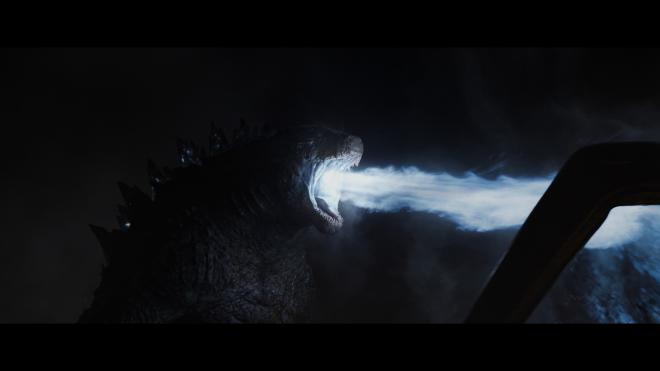 With that, I do feel the drama of Aaron Taylor-Johnso's Ford and his family could have been handled in a more interesting way. Essentially this journey home quest is pretty damn close to War of the Worlds. Granted he does lock and load and goes to war against the MUTOs, but he's at heart trying to find his wife and son - which is all too conveniently wrapped up in a nice little bow. I'd have loved for dear old Bryan Cranston dad to join with Ken Watanabe's Dr. Serizawa and work together. Their dynamic would have been a lot more interesting to watch than half of the human characters we're left with. It's as if Cranston only had a few days to shoot and what they got was all they could get and had to move on.

But I'm nitpicking the human element of a big monster mashup. It's important not to forget the characters simply serve as a framework for how to view Godzilla and the MUTOs. This film is steeped in post 9/11 imagery to rival Michael Bay's visual exploitation of buildings crumbling to the ground below. Only here there's a sense of maturity to the presentation. Again yes, we're watching monsters battle, but we're also watching humans try to survive the collateral damage and immense tragedy.

For me, the most haunting imagery is the tsunami caused by Godzilla's arrival in Hawaii and its similarity to the terrifying 2004 Indian Ocean incident that claimed nearly 250,000 people's lives. That sequence scared me more than anything else in this film. Godzilla may be there to help, but there's a human cost to the equation that this film never overlooks.

To that end - while this isn't a perfect movie - it's still a damn good one and better than it's often given credit for. I may be in the minority that actually enjoyed King of Monsters for what it was - the old-school Toho-style mayhem. But this 2014 Godzilla is the better movie to be sure. I have high hopes for the upcoming Kong vs Godzilla. I enjoyed Kong for what it brought to the table and the teases for a Mecha-Godzilla may just be the closest thing to a Pacific Rim mashup we'll ever get to see. But that's something for another review in a couple of weeks.

For now, fans of the 2014 Godzilla have a lot to look forward to with this 4K UHD Blu-ray release. It'd been a while since I broke out my 3D Blu-ray and gave this flick a whirl. I was glad to see that it holds up well and that 7 years and two other franchise entries haven't knocked it back any. Flawless? No. Fun? Absolutely. For a film where anything and everything could go wrong, it does a lot right. Edwards never forgets that these are massive beasts capable of doing incredible damage and if we humans happen to be in the vicinity, we're lucky to survive.

Godzilla 2014 finally lands on 4K Ultra HD Blu-ray from Warner Bros. Presented in a two-disc 4K UHD + Blu-ray + Digital set, the film is pressed onto a standard region-free BD-100 disc and housed in an eco-friendly black 4K case with an identical slipcover. The disc loads to a static image main menu with traditional navigation options. 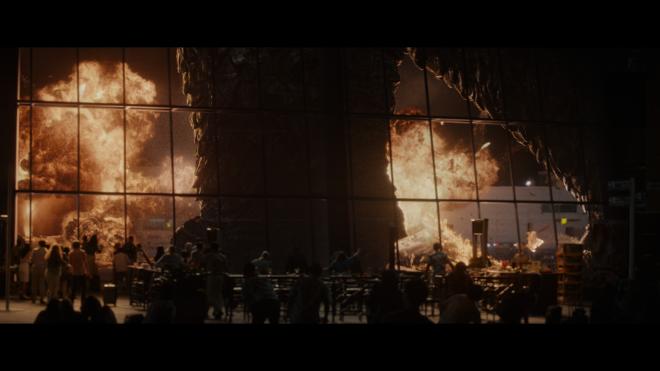 This new 2160p transfer is upscaled from a 2K DI - but offers many notable improvements over the old 1080p Blu-ray and 3D Blu-ray releases. During daylight sequences, there is a clear and notable improvement in fine details. Faces, clothing, production design of the irradiated quarantine zone in Japan all offer appreciable lifelike upticks in detail levels. Flipping between the discs, you can feel that the last few years in technological advancements have been employed to great success.

While detail improvement is appreciable, the biggest advancement and key reason to upgrade is thanks to smart HDR-10 application. While a Dolby Vision or HDR-10+ dynamic metadata application would have been ideal, this presentation easily outperforms the old 2014 discs. Colors pick up some added dimension with extra primary pop - but the real benefit is the numerous dark nighttime scenes.

When I saw this in theaters in 2D and 3D, I thought it looked fine, dark sure but you could still make things out and there was a sense of depth. When this hit 1080p Blu-ray it felt like it was several shades darker losing a lot of detail clarity and image depth in the process. This upscapeled 4K disc with HDR10 greatly improves that issue. It's still very dark but now it looks like you can actually see what the hell is going on with improved lighting levels and shadow gradience.

These scenes still look as though some slight edge enhancement was employed, some crush is still evident, but it's been greatly improved so it's not overly severe or distracting. The final sequence where Ford and the military are recovering the nuke and he destroy's the MUTOs' nest offers much better shading from the bright orange fires to the deep dark inky black shadows. To top it off, the bold blue of Godzilla's fire breath really pops! All in all a worthwhile visual upgrade. Not perfect, but worth it. 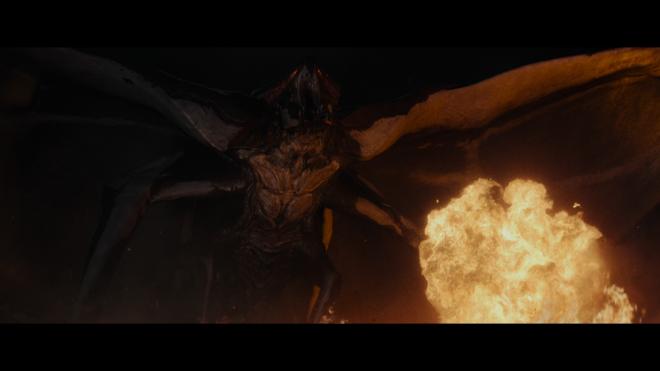 While the improved visuals - in particular black levels - might have been enough to warrant the upgrade, it's the Dolby Atmos audio mix that is the real true reason to upgrade your collection. From the opening credits with Alexandre Desplat's score, the soundscape dynamics feel much more full and engaging. That LFE kicks in hard and fast. The disaster at the nuclear reactor with the MUTO calls and the destruction that follows is sinisterly impressive. I always thought it was kinda funny to see people running away from radiation, but the fully engaged atmospherics with front, sides, rears, and overheads engaged made that opening sequence rather terrifying.

Then the monsters start doing their thing and the whole show becomes a flurry of activity. Don't get me wrong, the previous 7.1 DTS-HD MA mix was pretty great stuff and it holds up, but it's impossible not to give the edge to this new Atmos track. From the MUTO calls to Godzilla's roar and the mass destruction that ensues, the whole soundscape just feels bigger and more immersive. With jet planes and monsters overheads and screaming people in front of you and buildings falling all around the sides and rears - this is a great Atmos track. This made me feel like I was back at the giant screen in Denver where I first saw this movie when it hit theaters seven years ago.

Levels are spot on, I didn't feel the need to employ the Disney-Compensation protocol. In fact, I actually felt the need to turn it down it was so impactful upfront. That said, this is a movie worth cranking the volume for! That final roar from Godzilla is beautiful stuff! 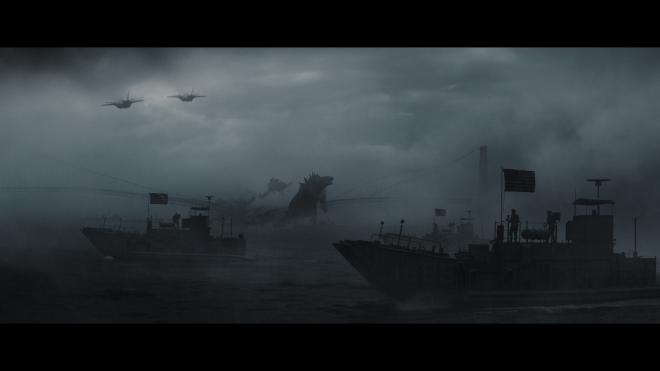 Nothing new has been added here. None of the bonus features are on the 4K disc and are only on the included 2014 1080p Blu-ray disc.

Godzilla 2014 set the big stage for the franchise to follow. We've enjoyed the 70s themed Kong and the big monster mash Godzilla: King of the Monsters and we have Godzilla vs Kong knocking on our doorsteps in just a couple of weeks. Now with this 4K UHD Blu-ray disc, we're finally getting the best home viewing experience possible for Godzilla. With HDR10, the colors and black levels offer notable improvement while the Atmos audio mix is worth the price of admission alone. Sadly no new bonus features were included. This is one worth cranking the volume for. Recommended.