Celebrating its 50th Anniversary, Willy Wonka and the Chocolate Factory remains the same high-spirited cautionary fairytale thanks to Gene Wilder's iconic performance and its creepily imaginative visuals. Opening its doors to Ultra HD, the video presentation is an excellent step-up from the Blu-ray, featuring a satisfying DTS-HD Master Audio mix but the same set of supplements. Overall, the UHD package makes for a Recommended addition to the library.

Considering the sheer volume of movies ever produced, few have ingrained themselves in our cultural consciousness like Willy Wonka & the Chocolate Factory. The celebrated children's fable about misbehavior and over-indulgence has amassed an immensely loyal cult following in its 50-year history. Growing up with the film on television, the endearing but darkly comedic story seeped into our collective imagination as both a fantastical wish-fulfillment of edible delights and a nightmarish anecdote on gluttony and selfishness. Five lucky contestants win more than a mere tour of a lifetime, receiving their just desserts for their appalling and obnoxious behavior. Like a true fairytale in the tradition of the Brothers Grimm, the narrative reveals itself as a cautionary tale for contemporary children, such as the spoiled Veruca Salt and the competitive Violet, and even forewarns the effects of technology, as with the television-obsessed Mike Teevee.

With Warner Bros. purchasing distribution rights and repeated showings on television throughout the 1980s, the strange and wacky world of Willy Wonka's factory and the lessons imparted on each child grew from a box-office bomb into an enduring children's classic. A major reason for this is undeniably due to Gene Wilder's performance, seen by some as his very best and most memorable work. Nonsensically dishing out quotes from Shakespeare, Oscar Wilde, and Samuel Taylor Coleridge's "Rime of the Ancient Mariner," Wilder creates such an air of charm and personality, we almost wish the character were real. At the same time, director Mel Stuart expertly guides us through this demented and fantastical experience of childhood invention, cunningly imparting younger viewers with some easy to swallow life-lessons that amazingly remain as relevant as ever.

Celebrating its 50th Anniversary, the classic film remains an adventure fairytale that scares and amuses the young of heart with its eccentricity, still appreciated for its unique and imaginative visuals, camouflaging its gloomier aspects without being off-putting.

Warner Home Video brings Willy Wonka & the Chocolate Factory to Ultra HD Blu-ray as a two-disc combo pack with a Digital Copy code. When redeeming said code, users are granted access to the 4K digital version on some platforms while for others, it's available in HDX with legacy Dolby Digital audio. The dual-layered UHD66 disc sits comfortably opposite a Region Free, BD50 copy, and both are housed inside the standard black, eco-elite keepcase with a glossy slipcover. At startup, the disc goes straight to a static main menu screen with the usual options along the bottom and music playing in the background. 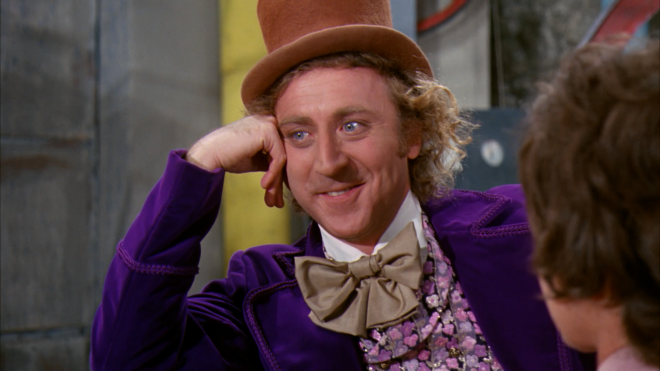 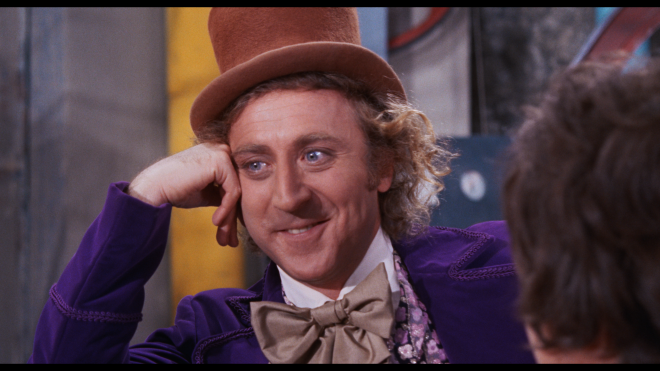 The cult classic wins the magic ticket on Ultra HD thanks to a beautiful and pleasing HEVC H.265 encode, which was reportedly struck from a brand-new remaster of the original 35mm camera negatives. The native 4K transfer enjoys a welcomed uptick in overall definition, exposing every nook and cranny of Wonka's factory and his various contraptions. The lettering on candy wrappers and signs are distinct, individual hairs are detailed, and the stitching and fabric of the costumes are easier to make out, especially the felt-like fabric of Wonka's hat. Nevertheless, the video comes with its fair share of soft, blurry sequences and can be distracting at times, but they are also to be expected, resulting from the condition and age of the elements. Otherwise, the picture looks great, offering a nice step-up over the previous Blu-ray.

Of more interest is the significant shift in the framing or what looks to be a revision to the film's original theatrical 1.66:1 aspect ratio. For DVD and Blu-ray releases, the movie was reframed to better fit the 1.78:1 widescreen televisions. And for this UHD edition, it is now presented in a 1.85:1 window. But the video also looks as though it was zoomed in, weirdly showing a bit more information in the top right of the image while cutting off a significant amount of the bottom and left, as seen in the attached screengrabs. The shift in framing is not immediately apparent while in motion and thankfully, not so egregious as to ruin its enjoyment. In fact, it looks great in a 1.85:1 frame. It is nonetheless a significant change worth mentioning.

The presentation also benefits from what appears to be a new color timing, shifting the spectrum from the greenish-yellow variety seen on the Blu-ray to a warmer reddish-magenta tint. Facial complexions have a more natural peachy tone to them with revealing lifelike textures, and the Oompa-Loompas are a deep yam orange shade. In fact, secondary hues show more appreciable variation throughout, especially the earthy browns and tans while the purples and pinks appear more animated with the candy land and egg room being the showstoppers. Interestingly, primaries remain about the same and don't show much of a dramatic jump from the 1080p version, but they are nonetheless richly saturated and more accurately rendered, like Veruca Salt's candy red dress and Violet's cobalt blue outfit.

The better and more noteworthy upgrade comes from the subtle and nuanced application of HDR. The improved contrast balance displays crisp, beaming whites in the clothing, the lights, and various rooms throughout the factory - most notably in the Wonkavision studio. Specular highlights have a more energetic and radiant luminosity, adding a tighter sparkle to Slugworth's glasses showing a narrower glow in the light fixtures to reveal more details in the hottest areas and supply a more natural realistic sheen to metallic surfaces. The Fizzy Lifting Drinks room is a great example there. Black levels remain spot-on and true with stronger gradational differences in the various shades, allowing for better visibility of the finer aspects within the darkest shadows, such as when Charlie bumps into Slugworth in the dark tunnel.

Awash in a fine, consistent layer of natural grain, this 4K presentation is the best the film has ever looked on any format with a lovely, cinematic quality though some fans might take issue with the framing changes. (HDR10 Video Rating: 82/100) 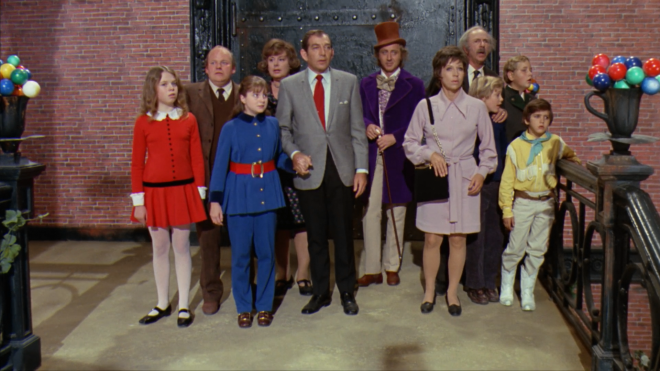 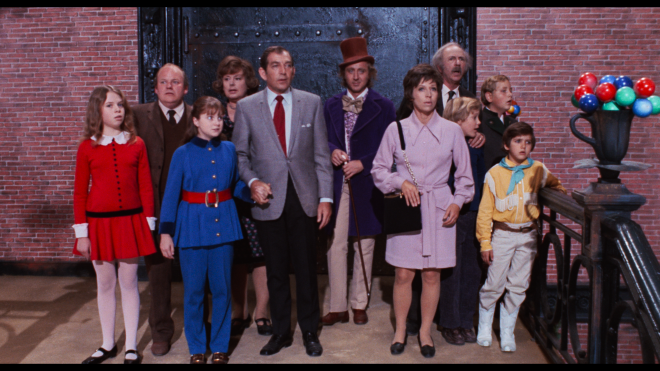 The wacky candy maker opens his doors to UHD with a new DTS-HD MA 5.1 soundtrack, which does not reveal any significantly discernable differences from its Dolby TrueHD 5.1 counterpart. Far as I could tell, this remains the same front-heavy presentation delivering well prioritized and intelligible vocals while the music and atmospherics expand across the screen, generating an expansive and engaging soundstage. The mid-range exhibits excellent definition and clarity while the low-end and rear activity is practically non-existent, save for some very trivial echo effects.

For a more in-depth take on the audio quality, you can read our review of the Blu-ray HERE. (Audio Rating: 70/100) 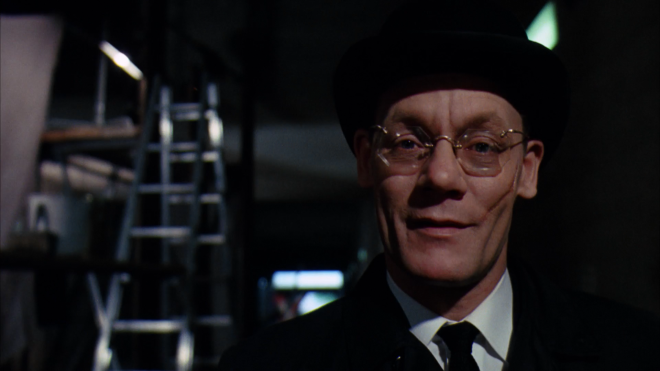 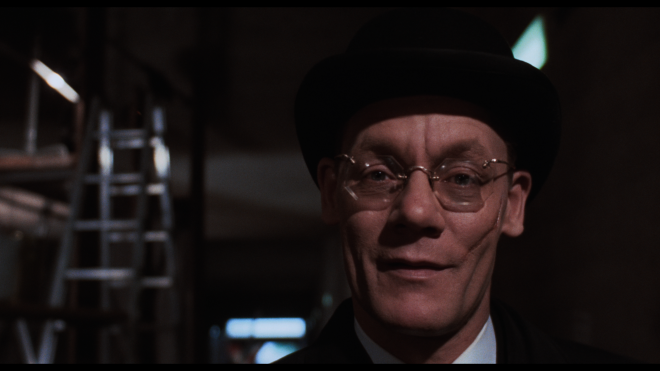 Supplements mirror those enjoyed on previous Blu-ray editions and available on the accompanying BD disc. 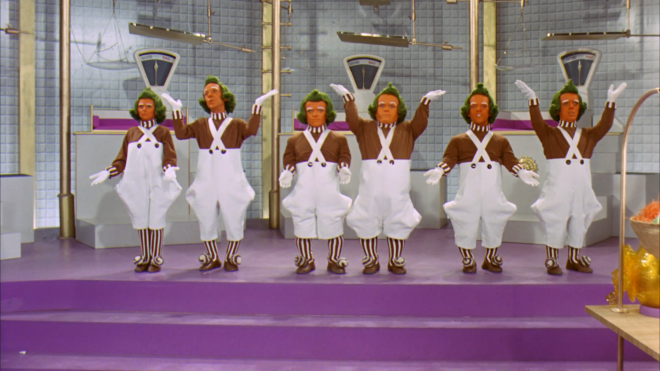 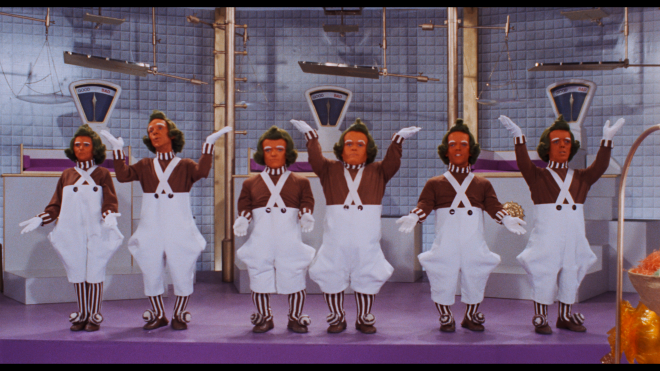 Celebrating its 50th Anniversary, Willy Wonka and the Chocolate Factory remains the same high-spirited adventure fairytale, which has melted into our cultural consciousness, largely due to Gene Wilder's memorable performance. The beloved cult classic continues to be a terrifying cautionary tale that amuses the young of heart with its eccentricity, still appreciated for its creepily imaginative visuals camouflaging its gloomier aspects.

Opening its doors to Ultra HD, the 4K HDR10 presentation is an excellent upgrade from its Blu-ray counterpart although might take issue with the framing changes. Also, the new DTS-HD Master Audio soundtrack does not reveal any significantly discernable differences from its predecessor, but it is nonetheless a satisfying and engaging lossless mix. With the same set of bonuses as before, the overall UHD package is recommended and makes a great addition to the library.