Tim Burton’s tall tale masterpiece Big Fish earns a right proper revisit on 4K Ultra HD Blu-ray from Sony. This wonderful movie is gifted a bold colorful new 4K transfer complete with Atmos audio mix. Archival bonus features from the DVD have been added to the release - not new but some interesting material that's been missing for a long time. Highly Recommended

“Most men will tell you a story straight through. I won’t be complicated, it won’t be interesting either.”

The last time we reviewed Big Fish on disc, HDD was so young and green we didn’t even have author credits for our reviews! I can’t tell you who wrote that original review, but I share their sentiment 100%. Since I was a kid and saw Beetlejuice in the theater, I’ve been a Tim Burton fan. I don’t love everything he’s made - his output of late is on the hit or miss side - but I’ll at least give it a chance. He’s a creative visionary director that often has a surprise or two up his sleeve and Big Fish was one of the biggest surprises of his career.

This film is the perfect blend of heartfelt sentimentality and visual splendor. In lesser hands, this film would have gone off the rails and become a sap-fueled family soap opera snoozefest or a pretty picture with hollow unrelatable characters. Burton through John August’s script found the perfect balance for Edward Bloom (Ewan McGregor/Albert Finney) to spin the yarns about a wild adventurous life. Though an amazing cast and colorful characters, the film finds pleasant energy and carries through to the end. There’s plenty of fantastical elements in play to keep the film lively and entertaining, but before they can spill over and overwhelm Burton pulls it back just a little bit. The sentimentality doesn’t become a saccharine mess.

Each story becomes more elaborate and stretches believability - but then every story we tell is embellished. Who cares so long as it’s a good story, right? Each story has a purpose and one little piece builds on the next.  Ultimately this film is about fathers and sons, parents and children, and the legacy we want to leave behind. Do we want to be remembered for a bank account, or do we want happy memories to keep us alive after we've departed?

Not long after this film hit theaters my family lost my uncle at a very young age. He wasn’t even out of his forties when he lost his second fight with cancer. He was my Dad’s baby brother and was easily the funniest member of our line. While his service could have been a somber affair, I shared a story that had been passed down of how my grandfather electrocuted my uncle with a lawnmower starter when he was only six years old. He wasn’t one to want people crying for him and that story got a good laugh - mostly because it explained a lot about my uncle to the people who knew him best, but it also helped people remember who he was in his prime. If he could have he’d have told the story himself. 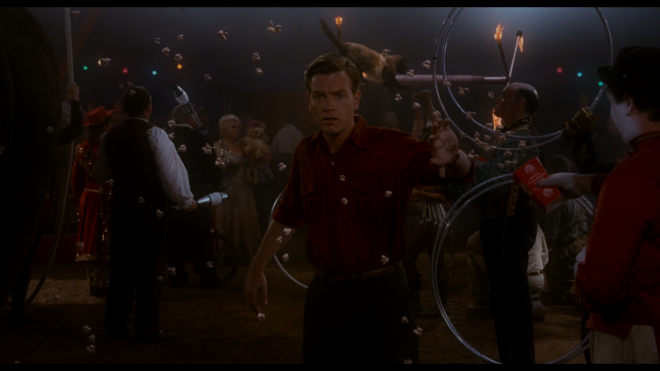 Seeing this movie for the first time and my uncle’s passing are intertwined events for me. I don’t often pull this movie out because I can’t help but think of those personal events. But whenever I do watch Big Fish, I’m never sad or depressed. Emotional sure; it’s hard not to get hit in the feels with this one, but I love the film. I’m always happy by the end and it was always a shock to me that this wasn’t a massive hit in theaters and was largely forgotten come awards season. At this point, it's Big Fish that gets me excited for the next Tim Burton release. He hasn't matched this film's execution, but I'm hopeful he can pull another one out and surprise us again. It’s a genuine modern classic in my book and I’m glad to get to revisit it again looking and sounding better than ever.

Big Fish reels in 4K Ultra HD Blu-ray thanks to Sony in a two-disc 4K UHD + Blu-ray + Digital release. Housed in a standard black case with an identical slipcover, the disc loads to a static image main menu with traditional navigation features. All of the bonus features are found on the standard Blu-ray disc. 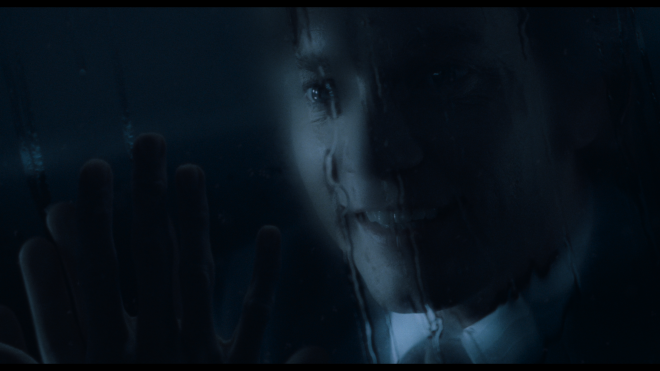 After picking up a new native 4K remaster, Big Fish finds its home in Ultra HD with an often spectacular HDR10 transfer that never betrays its film roots. Some of the CGI effects of the era can have a “floating” quality - the twins’ performance is a notable spot - but this is an otherwise impeccable near-flawless film-like presentation. From the get-go, details pick up a tremendous boost in lifelike clarity. Facial features - skin pigmentation, laugh lines, makeup all come through perfectly. The scenery and set design showcase an impressive range in virtually every shot. Through it all, film grain has been retained maintaining a welcome natural presence without appearing overly noisy nor has it been scrubbed in any capacity. 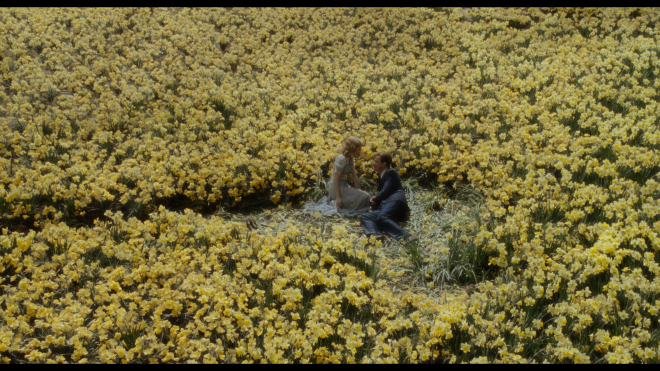 The HDR10 application is judicious without over-blowing the spectrum. This movie has always been bright and bold with impressive use of primaries for various scenes. The yellow daffodils, the blue circus tent, the red stage in China, each of these scenes use a single primary color thematically and they look sensational and natural. Flesh tones are healthy and lifelike. Black levels give us that deep saturation we want to see without crushing. Whites are bold and crisp without any blooming. Throughout the film, I felt like I was seeing new details and appreciating the design of the movie in a way that I hadn’t before. Granted it’s been a couple of years since I fully sat down with this one, but it was a welcome revisit and absolutely worth the trip. 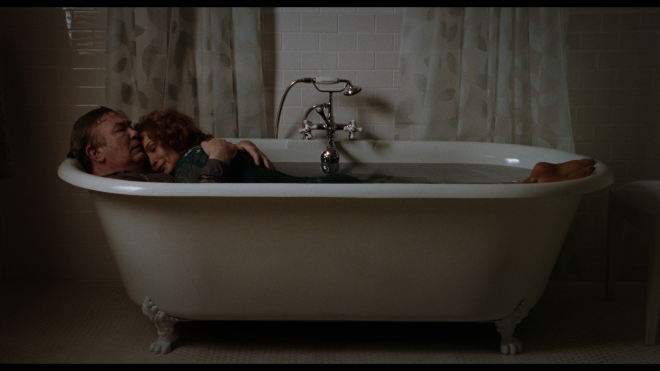 In addition to an excellent video transfer, Big Fish picks up a new and welcome Atmos audio mix. While it may not have needed it, it does benefit from the spacing and atmosphere the extra channels provide. Much of the film is conversational, so there are stretches where these extra channels are only really being used for atmosphere, but when some of the bigger stories enter, the mix opens up beautifully with lively rear and overhead activity. The first time we meet Matthew McGrory’s giant Karl, the thud of his footsteps and the boom of his voice moves through the channels and gives a lovely LFE rumble. It’s soft touches like this scene or when Edward is parachuting into China that works so beautifully. It’s not constant action, but it uses the dimensions in immersive ways. Dialogue throughout is clean and clear without issue. Levels are spot on without needing any additional compensation in that department. 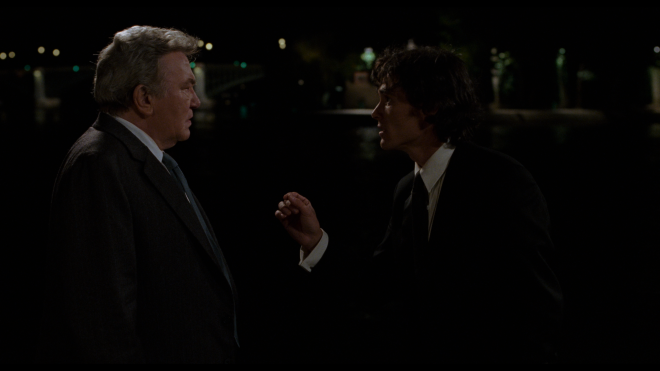 Sadly there aren’t any bonus features on the 4K disc - not even Tim Burton’s commentary which is very frustrating so you’ll have to make use of the remastered Blu-ray for that one. What we get now is a collection of bonus features that were mostly available on the old DVD but passed over for the Blu-ray release. A lot of this is older material that is newly presented like EPK sides and behind-the-scenes footage - it's all SD. 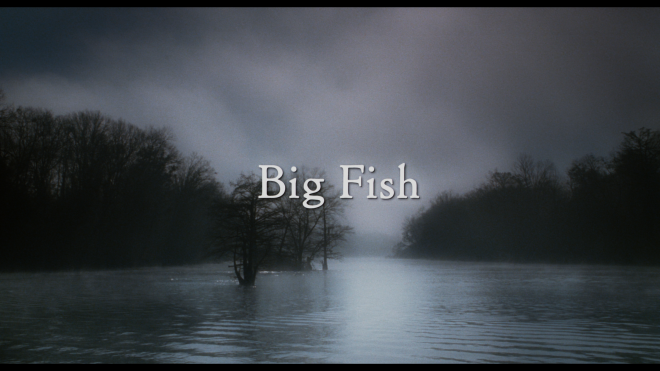 Big Fish may be closing in on 20 years old now, but it’s still one of the best movies of the 2000s. An emotional fantastical spectacle - Tim Burton brought his best abilities as a creative visual filmmaker to bring this film to life. More than worthy of an upgrade, Sony brings this film to 4K UHD Blu-ray offering a fresh native 4K remaster with HDR10 and a terrific Atmos audio mix to match. Fans waiting for a good reason to upgrade their old Blu-rays have finally found it. Highly Recommended.