Beetlejuice showed the world the Tim Burton, Michael Keaton, and Winona Ryder were destined for greatness in this oddball tale of death, life, and music in a heart-warming, family-friendly way. It also gave audiences one of the best cult icons with the Beetlejuice character and a new found love for Harry Belafonte for new generations. Warner Bros. delivers a grande, new 4K transfer with HDR10, and a fantastic new Dolby Atmos track. Unfortunately, there are no new extras, but rather the same bonus features from the previous 2008 release that has nothing to do with the making of the film. It's due for an overhaul. That being said, this is the best Beetlejuice has looked and sounded since it was released all those years ago and that alone is worth the price of admission. Highly Recommended! 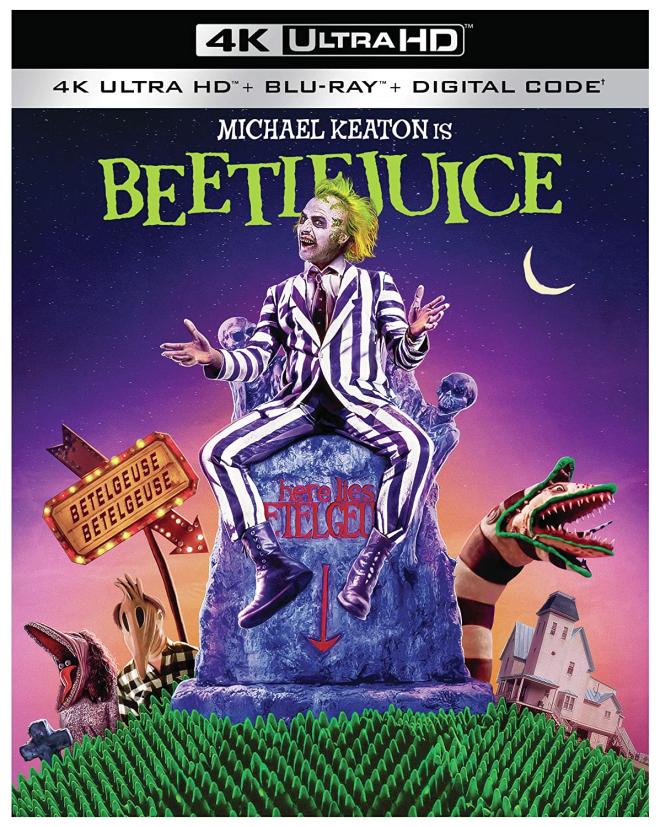 Tim Burton took the world by storm in the 1980s with his unique visual style and ability to mix horror, comedy, and superheroes together. From his first short film Frankenweenie to his first feature-length film PeeWee's Big Adventure, the filmmaker was bound for greatness. Before he came a household name in 1989 for Batman, he made a wacky and weird film titled Beetlejuice that showed the world that mixing death, the afterlife, and hauntings could be fun for the whole family with dazzling performances and one iconic cult character to rule them all, played by the unbelievably talented and funny Michael Keaton.

Never before had someone made a mixed grab bag of emotions about untimely death and dealing with grief, disbelief, and the netherworld in such a light-hearted yet haunting way before Beetlejuice that gave birth to a new kind of genre and visual style that Burton coined. Dealing with some taboo subjects for its time, Beetlejuice hinted at some strong feelings underneath the laughs that brought these characters to a relatable arena and made sense in a non-sensible universe. It's quite amazing.

The film begins with a young couple, Barbara and Adam Maitland, who both live a quiet life in a small country town in Connecticut. During an early morning errand, a freak car accident occurs where the happy couple ends up dead. They soon realize this unfortunate news and have to start learning how to cope with living as ghosts for the next 125 years as a posh New York family moves into their home and starts to redecorate and throw all of their belongings out. This new family includes a young daughter (Winona Ryder), who is strange and unusual, who can actually see the deceased couple and converse with them.

Unhappy with their new roommates, the Maitlins try a smattering of Road Runner and Wyle E. Coyote type traps to lure their new tenants running for their lives with the help of a hilarious, outrageous, and sinister undead entity named Beetlejuice (Michael Keaton). It all culminates in a circus of paranormal exorcisms, possessions, and a marriage that is laugh-out-loud funny and horrifying at the same time.

Weaving in and out of discussions of life and death, along with the stages of grief on a variety of subjects from miscarriages to a broken marriage, Beetlejuice tackles all of these elements with grace and a little bit of laughter. Burton even incorporates a couple of musical numbers into the film, giving the narrative an otherworldly feel to the styles of the amazing Harry Belafonte. The unique visuals and downright hilarious tone of Beetlejuice himself, along with the heartwarming elements of family make this film excellent some 30 years later. If there's one gripe to be had, it has to be that Michael Keaton didn't win any of the Oscars or Golden Globes for his performance, because it's next level good.

Beetlejuice summons its way on 4K Ultra HD Blu-ray courtesy of Warner Brothers in a two-disc 4K UHD + Blu-ray + Digital set. The discs are housed in an eco-friendly two-disc black case with the same slipcover artwork. Would it kill Warner Bros. to deliver some alternate new artwork? The included Blu-ray is identical to the 2008 release and has not been upgraded in any way. There are inserts for a digital code and survey for Warner Bros. 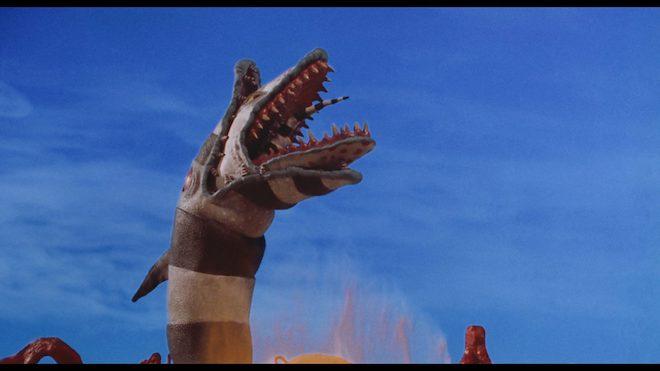 Beetlejuice comes with a brand new 2160p UHD transfer with HDR10 that is simply outstanding. Another wonderful element to this new 4K release is the restoration to its original aspect ratio of 1.85:1 that looks amazing. This is one of those films where the use of color plays a character in the film and this HDR10 color enhancement allows the beautiful array of colors to shine, making this the best this film has ever looked.

With Tim Burton, cinematographer Thomas Ackerman, and production designer Bo Welch - the film has its own unique look which differs from almost every other piece of cinema and became the goto visual for Burton in the coming decades. The color palette at the beginning of the film has an antique, rustic look to it with country vibes of decayed floral arrangements, browns, and pinks with faded greens sprinkling the Maitland's house. Their yellow station wagon pops with a glamorous yellow that contrasts nicely with the pitch-perfect green grass and earthy toned country buildings that all have bolder and richer elements.

Once the Maitland's pass on, the afterlife colors come into play with a Burton like gothic tone that looks like a haunted Las Vegas city full of high-energy neon-colored smoke, ghouls, and settings. Electric blues in the background with shiny green grass, along with vivid yellow sand in the netherworld is simply irresistible. Beetlejuice himself along with the many different rooms in the newly designed house has some excellent purples, slimy greens, bold reds, and some fascinating whites that range from angelic to corpse-like decay. The black levels are very deep and inky with zero evidence of crush or murky shadows. There are upgraded colors here that weren't noticed before but now come alive in this new transfer.

The detail looks incredible with new bits of detail coming through with this new transfer. All of the grime and decay on Beetlejuice's face is crystal clear and easily seen. The visual effects of the sandworm look amazing with its clay-like textures along with the Beetlejuice snake with all of its individual scales being revealed. The background items of the creepy sculptures and furry dining room chairs all show excellent textures as well in the background. The different lighting only adds to the exquisite detail here. When the Maitlin's grow old and wrinkly, every bit of their aging makeup showcases the intimate work of the makeup effects people perfectly. Beetlejuice's light green and white hair stand out tall and wild where each individual hair can be seen as well. There is a wonderful layer of film grain, keeping the image in its filmic state as well. Lastly, there are no instances of any banding, aliasing, or artifacting.

This is the perfect image and one of the best video presentations from the Warner Bros. catalog. 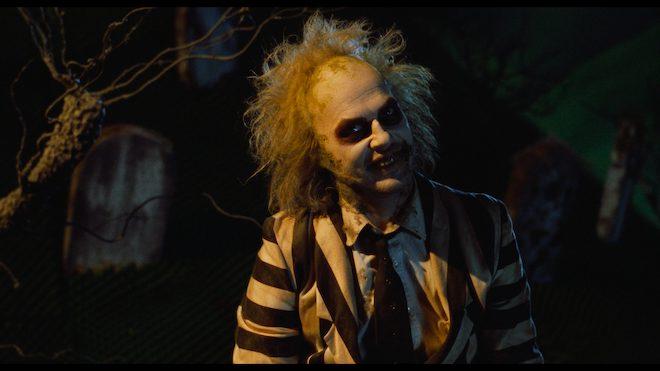 This new Beetlejuice 4K release comes with a brand new Dolby Atmos mix that automatically heads to TrueHD 7.1 for those that don't have an Atmos setup. This is a much welcome new addition to the film and adds quite a few audio elements that weren't there before, providing a better immersive viewing and listening experience.

Sound effects are loud and robust on each occasion from the yellow station wagon plunging into the creek to the brick door opening to the netherworld. These effects are realistic and eerie in their own right. The other gooey effects of the shrimp hands popping out to the Maitland's tearing away their faces all sound properly gross and wonderful. The film also implores a cartoony sound design as well with a ton of high pitch sweeps, boings, and bleeps that keep the story grounded and fun for the whole family to enjoy. Ambient noises of door creaks, the small town wind and air, and people in other rooms chattering are all fantastic.

Danny Elfman's iconic and brilliant score always adds to the whimsical and haunting tone of the film and is quite memorable. The dialogue is also clean and easy to understand, even with Keaton's fast-paced dialogue. Lastly, the height speakers bring in some much-needed sound effects from the sandworm and other ghastly noises throughout the house on a consistent basis. 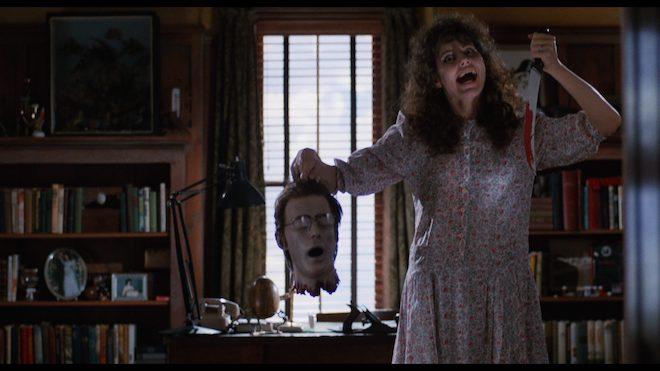 There are about 37 minutes of bonus features included in this release, none of which are on the 4K Disc, but rather placed on the Blu-ray release. There are no new extras, but instead, some of the previous special features are imported from the 2008 release. That's unfortunate because this film needs an overhaul of relevant bouns features. 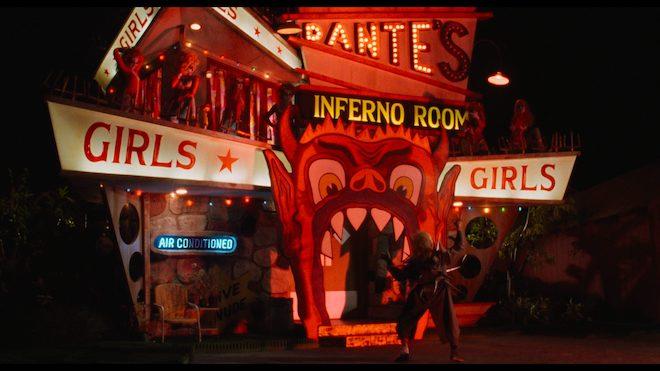 Beetlejuice stands the test of time and completely holds up still to this day. It's still funny as ever, a little scary in moments, and brings to life some truly remarkable ideas of the afterlife in a fun way. The music is excellent and the performances are all award-worthy, specifically with Keaton. The new Dolby Atmos track and 4K image with HDR10 are simply phenomenal. This 4K is a knockout from Warner Bros, despite the lack of bonus features. Highly Recommended!