Three decades later, Tim Burton's Batman remains a visually-arresting adaptation of an iconic comic-book hero and continues to be a dearly beloved classic of the genre with memorable performances by Michael Keaton and Jack Nicholson. Celebrating its 30th Anniversary, the film swings into action on 4K Ultra HD Blu-ray with a lovely HDR10 presentation and a mostly satisfying Dolby Atmos soundtrack, but the same supplements as before. Nevertheless, the overall UHD package comes Recommended and makes a great addition to the 4K library.

The summer of 1989 is one of my personal favorite years in movies, as that childhood period is littered with several memories of frequenting cinemas nearly every week. Of those, Tim Burton's Batman remains my most memorable — second perhaps only to Steven Spielberg's Indiana Jones and the Last Crusade — because I still remember riding with cousins on the back of a compact truck to the drive-in theater. Already being a fan of DC's Caped Crusader before seeing the movie, I was quite giddy and excited to see a live-action adaptation of the comic-book character from the same imagination that gave us Pee-wee's Big Adventure and Beetlejuice. Also, at the time, I couldn't care less about the controversy surrounding Michael Keaton being cast as the masked vigilante hero, but I remember fans throwing a hissy fit.

Besides, although the comedic actor did surprisingly well in the role, Jack Nicholson ultimately steals the show in his portrayal of the sadistic psychopath supervillain, the Joker, which is my favorite thing about this production. Unlike other superhero origin stories, the focus in Sam Hamm and Warren Skaaren's script is really on the genesis of The Clown Prince of Crime and his emergence as Batman's most celebrated archenemy. Despite the plot borrowing elements from Alan Moore's The Killing Joke and Frank Miller's The Dark Knight Returns, the character's beginnings as a twisted gangster with a personal history to our hero adds a more poignant element to their relationship. After thirty years, Nicholson's performance endures as one of the most iconic versions of the character put to screen. (Next to Heath Ledger, of course!) 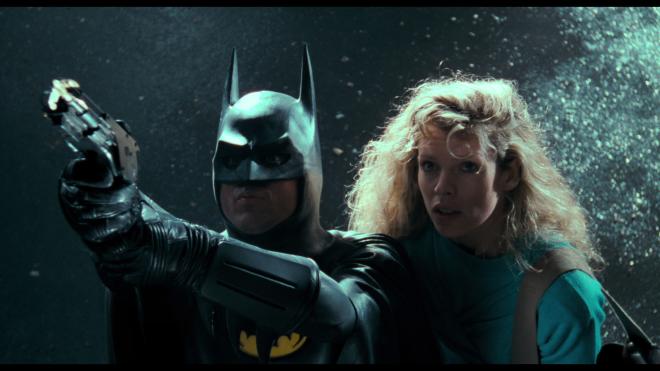 For a more in-depth take on Tim Burton's Batman, check out our original Blu-ray review HERE written by Peter Bracke.

Warner Home Video celebrates the 30th Anniversary of Tim Burton's Batman on Ultra HD Blu-ray as a two-disc combo pack with a flyer for a Digital Copy. When redeeming said code via WB.com and Movies Anywhere, it includes the SD, HDX (1080p) and 4K UHD with Dolby Vision and Dolby Atmos on various streaming platforms.

The triple-layered UHD100 disc sits comfortably opposite a Region Free, BD50 disc, and both are housed inside a black, eco-cutout case with a shiny, glossy slipcover. At startup, viewers are taken to a generic static screen with the usual options along the bottom and music playing in the background. 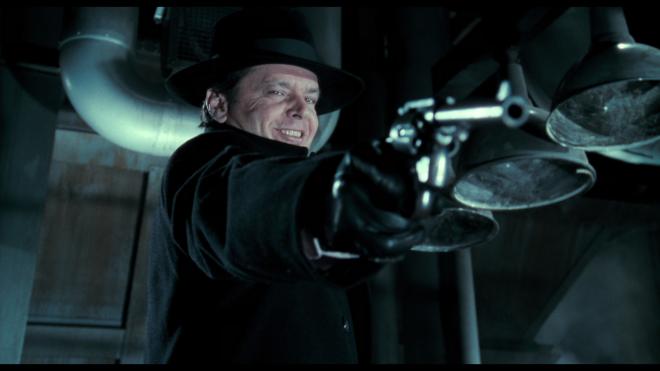 Tim Burton's Dark Knight swings into action on Ultra HD Blu-ray with a lovely HEVC H.265 encode, regularly sprinkled with enough stunning moments to make this version superior over its Blu-ray predecessor and the definite way to enjoy the 30-year-old classic.

The often amazing results are due to a brand-new 4K remaster of the original 35mm camera negatives, and the blockbuster, honestly, has never looked better. Every nook and cranny in the stage production can be better appreciated, even from a short distance, and every hair is razor sharp. Presented in its original 1.85:1 aspect ratio, the fine stitching in the Joker's suits are highly distinct while the rough, lumpy texture of Batman's rubber suit is plainly visible, and facial complexions appear healthy and lifelike for most of the runtime. However, the source definitely shows its age and condition, as several moments are noticeably softer and blurrier than others, but in spite of these instances of inherent poor resolution, the overall picture is fairly sharp and detailed.

The better and more noteworthy improvements come by way of the enhanced contrast and brightness levels, displaying crisper, more luminous whites and richer, dark ebony blacks than its HD SDR counterpart. The inky, velvety shadows show extraordinary gradational details and differences between the various shades, and the boosted specular highlights come with a more resplendent, intense glow without sacrificing the finer details, making the hottest spots and the reflection of lights dazzle while metallic surfaces glisten with realism. Given the darkly stylized cinematography, the palette is intentionally limited and practically monochromatic, yet reds are fuller and more dynamic while blues are more energetic with better variation in the shades. As would be expected, colors surrounding the Joker are observably more animated and spirited, especially the royal purples mixed with vivid violets clashing against the neon-like metallic oranges of the villain's iconic suit. At the same time, skin tones appear peachier and more accurate, making this 4K HDR10 presentation the best way to watch. (HDR10 Video Rating: 80/100) 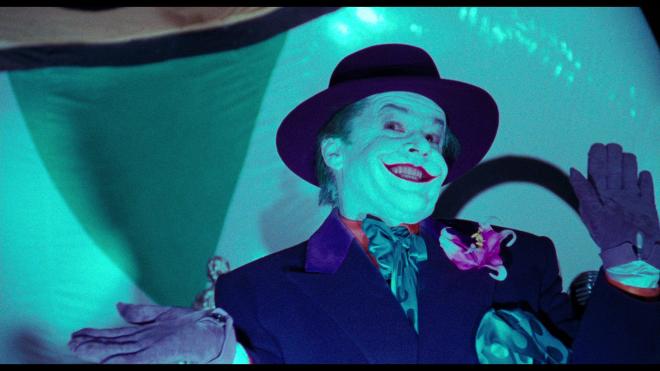 The Joker's reign of terror breaks into home theaters with a great and mostly satisfying Dolby Atmos soundtrack, which was also struck from the same remaster mentioned above. On the whole, the jump into the object-based audio territory offers a few welcomed improvements over its TrueHD counterpart, most notably a slighter wider and more spacious soundstage, which is especially appreciated in Danny Elfman's recognizable score. Objectively speaking, however, the differences between the two are not quite as dramatic or overwhelmingly convincing, which has more to do with the original sound production than any limitations with the codec or format.

Batman has always been a front-heavy presentation, and this new mix is no different. Although this version admittedly displays a bit more warmth and better fidelity, the mid-range is not very extensive, dynamic or impressively detailed. In truth, the design is somewhat lacking or shows very little distinction in the upper frequencies, making the action sequences feel a bit restrained and rather uniform. Gunshots have also been changed and unnecessarily updated, producing a noticeably different ring and echo than before, but they ultimately feel lackluster and flat.

On the plus side, dialogue reproduction remains intelligible and precise throughout. The low-end doesn't stand out in any significant way, but it's adequate and decently palpable for an action film of this vintage, providing the action and music with a weighty presence. Occasionally, atmospherics expand into the surrounds and the overheads, but they are far and few in between to ever generate a truly hemispheric soundfield. On the other hand, Elfman's music and Prince's songs resonate well with appreciable bleeds into the top heights and sides, delivering arguably the best aspects of this Atmos track. (Dolby Atmos Audio Rating: 74/100) 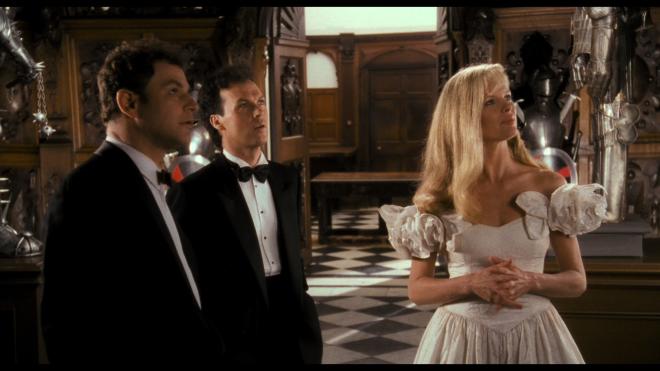 The same set of special features from both the Anthology box set and the Anniversary Digibook release have been ported over and only available on the accompanying Blu-ray disc. 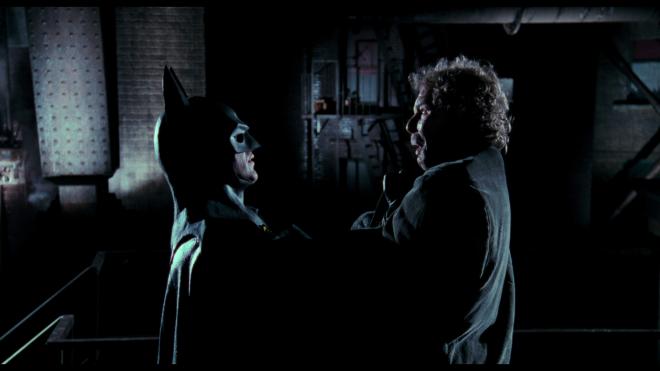 Forever ingrained into my childhood memories, Tim Burton's Batman will always be a beloved movie staple in this house, and the summer blockbuster continues to entertain just as much as it did the first time I saw it at the drive-in theater. Aside from being a favorite nostalgia trip, however, the entire production remains one of the most visually arresting comic book adaptations ever made and features one of the most iconic portrayals of the Joker thanks to the amazing talents of Jack Nicholson. Warner Bros. celebrates the film's 30th Anniversary with a brand-new 4K restoration and remaster for this Ultra HD edition, showcasing a lovely HDR10 presentation that surpasses its Blu-ray counterpart and complemented with a mostly satisfying Dolby Atmos soundtrack. Although this release ports over the same supplements as previous releases, the overall UHD package is a recommended addition to the 4K library.

Sale Price 25.99
List Price 41.99
Buy Now
3rd Party 20.7
In Stock.
See what people are saying about this story or others
See Comments in Forum
Previous Next
Pre-Orders
Tomorrow's latest releases