Although arguably his most accessible and straightforward film, Alejandro Jodorowsky's Santa Sangre remains a visually mysterious, high-stylist piece of film art with profound surreal images of horror and philosophical pilgrimages. Despite the lack of HDR grading, the beloved cult favorite falls to the altar of Ultra HD with a beautiful 4K presentation, an excellent pair of DTS-HD MA tracks and a wealth of bonus features. For cult enthusiasts, this four-disc collector's edition is a must-own while for others, it makes for a Recommended addition.

Although not mentioned as often as The Holy Mountain, Fando y Lis, and El Topo, Alejandro Jodorowsky's Santa Sangre is an exquisitely masterful piece of film art that hypnotizes with a perplexingly eccentric tale of love, familial devotion, and madness. The mesmerizingly beautiful film works as a standard revenge plot when an armless circus performer (Blanca Guerra) kills an incredibly voluptuous tattooed woman (Thelma Tixou), who's partly responsible for her physical disability. But even while toiling within a conventional structure, Jodorowsky splatters the screen with a grotesque array of oddities and freakish delights, demonstrating that the Chilean filmmaker will always remain terribly complex and abstruse even when at his most coherent and accessible.

In Santa Sangre, which translates to "holy blood," Jodorowsky explores the notion of redemption in conflict with accountability, as the film opens on a Christ-looking Fenix (Axel Jodorowsky) swinging from a tree like a monkey while inside a mental institution. As his name implies the mythological firebird phoenix, the young man embarks on a pilgrimage to understand the affects of his violent childhood when his armless mother (Guerra) returns into his life, forcing him to do her will as her missing limbs. These moments between mother and child are some of the most uncanny and brilliant spectacles of a fractured psyche, prompting questions about trauma and mental health while simultaneously designing visual poetry with Fenix's first crush, a deaf-mute tightrope walker named Alma (Sabrina Dennison), which means "soul" and another unfortunate victim of an abusive household.

As in all of his surreal films, Jodorowsky is content with simply having viewers raise questions while watching severely flawed people (physically, mentally, spiritually, or what have you) on dreamlike, metaphysical quests for the unattainable and inaccessible. For this deeply loyal fan of Jodorowsky's work, Santa Sangre is a dearly, unabashedly-loved favorite, a visually-arresting nightmare where people suffer in search of salvation from the pain of living.

For a more in-depth take on the film, check out our review of the 2011 Blu-ray HERE.

Vital Disc Stats: The Ultra HD Blu-ray
Severin Films brings Alejandro Jodorowsky's Santa Sangre to 4K Ultra HD as a four-disc Limited Edition combo pack with an attractive, lightly-embossed side-sliding slipcover. The Region Free, triple-layered UHD100 disc is accompanied by a pair of Region A locked, dual-layered BD50 discs, the second of which contains all the supplements, and the fourth disc is a CD soundtrack of Simon Boswell's original score. All four discs are housed inside a nice gatefold digipak with plastic trays featuring original artwork inspired by the film and eight color lobby cards. At startup, viewers are taken to the standard menu screen with the usual options along the bottom while full-motion clips and music play in the background. 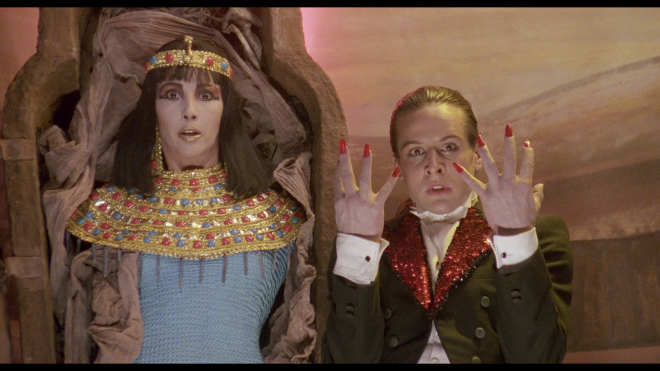 The surreal cult favorite finds a hopeful rebirth in the church of Ultra HD, offering faithful followers a notable upgrade over previous home video editions. Coming from a fresh remaster of the original 35mm camera negatives, which was supervised and approved by Alejandro Jodorowsky, the HEVC H.265 encode is cleaner and sharper overall. Naturally, this is the video's strongest area, showing better, well-defined lines in the costumes and the unique Mexican architecture, exposing trivial marks and imperfections in bricks, stones and the plastered walls. Background objects are plain and distinct from a distance while facial complexions appear healthy with lifelike textures. Of course, there are several instances of scenes looking softer than others and a few slightly poorly-resolved moments, likely due to the age and condition of the elements. But overall, definition and resolution are in excellent shape, and ultimately, the film has never looked better.

A major drawback for some but arguably a trivial complaint to others is the remaster not being baptized in the holy waters of HDR, which is frankly a tad disappointing since this grading process is the format's biggest selling point. Nevertheless, the native 4K transfer still exhibits an improved contrast and brightness balance throughout, displaying brighter, cleaner whites and rich midnight blacks with strong visibility in the darkest, penetrating shadows. Awash with a better-resolved, fine grain structure, the 1.85:1 image has an attractive film-like quality that fans will appreciate. Despite only being in SDR, the 2160p presentation also features a better color palette than before, especially with the primaries looking fuller and nicely saturated. Secondary hues enjoy a welcomed boost with various pastel colors in the Mexican streets looking a tad more vibrant and spirited. (Video Rating: 74/100) 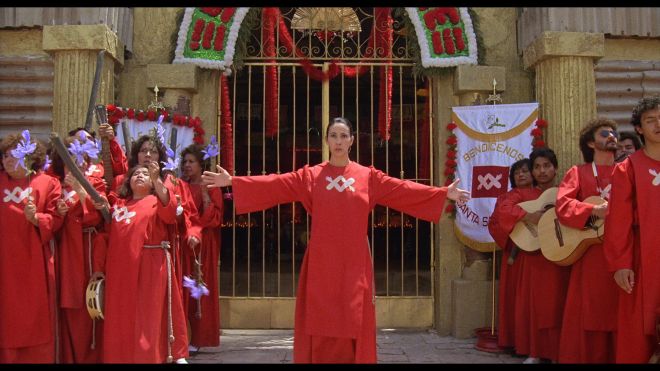 Like the video, the audio was also remastered and updated to a pair of generally satisfying DTS-HD Master Audio soundtracks with the first defaulting to a 5.1 surround sound while the second remains true to the 2.0 stereo design.

Although the original is typically preferred, the updated 5.1 track is surprisingly good and pleasing with a few atmospherics spreading into the sides without feeling forced or artificial, but they nicely expand the soundfield. It can, at times, feel rather finite and naturally, front-heavy, largely taking place at the center of the screen, but the mid-range is expansive with excellent distinction and definition, providing the soundstage with outstanding clarity and an engaging presence. Simon Boswell's memorably unique score benefits, exhibiting a great deal of warmth and superb fidelity as it bleeds across the entire front channels. The ADR work is apparent enough to be a bit of a distraction, but dialogue is nonetheless crystal-clear and adequate from start to finish, and the low end is plenty to give Boswell's music and the visuals some appreciable depth and weight, making a delightfully satisfying listen. (Audio Rating: 80/100) 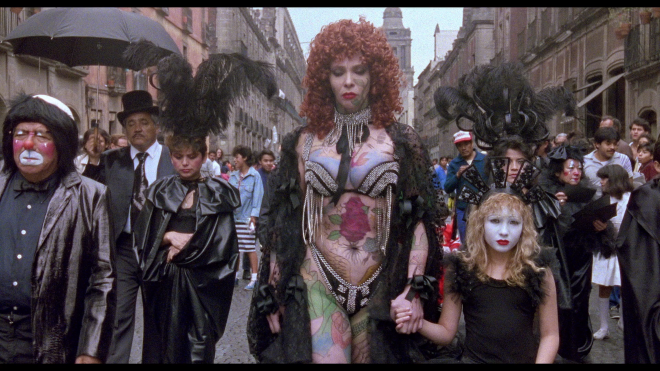 For this UHD edition, Severin has culled together a treasure trove of supplements, starting with a new interview piece shared between the UHD and the Blu-ray. The third disc is a spectacular collection of new and old bonus material while the fourth disc is a CD soundtrack disc featuring the original musical score by Simon Boswell. 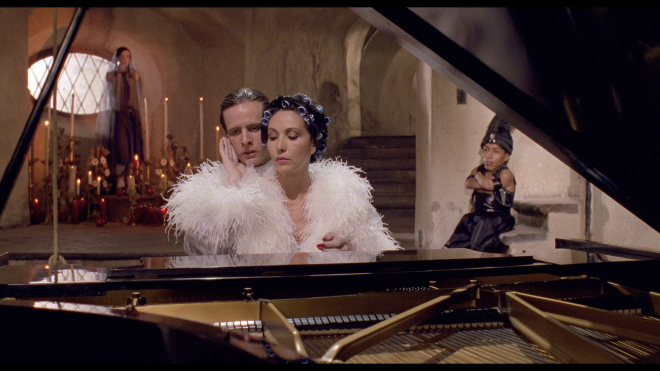 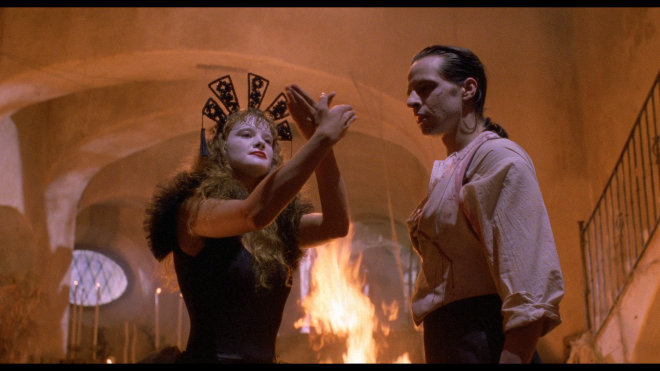 Though not recognized as a prolific filmmaker, Alejandro Jodorowsky has become a name synonymous with film art, a visual stylist with profound surreal images of horror and philosophical pilgrimages. Of all his movies, Santa Sangre is known as his most accessible with a highly unusual plot of circus performers, yet the story remains mysterious and a challenge to understand in its totality. Severin Films sacrifices the beloved cult favorite at the altar of Ultra HD with a beautiful 4K presentation, offering a strong upgrade over its Blu-ray predecessor, but the lack of HDR/WCG grading is a bit of a disappointment. Nevertheless, an excellent pair of DTS-HD MA tracks along with a wealth of bonus features sure to keep fans busy makes this four-disc collector's edition a tempting must-own for cult enthusiasts and admirers of Jodorowsky, but the UHD package is ultimately recommended for the curious.