The Hobbit: The Desolation Of Smaug - 4K Ultra HD Blu-ray

Peter Jackson's The Hobbit: The Desolation of Smaug is the second chapter in the epic-fantasy trilogy to the Tolkien book which is better than its predecessor and makes a fun follow-up. The adventure continues on Ultra HD with a stunning, demo-worthy 4K Dolby Vision video and Dolby Atmos soundtrack. Although lacking in special features, the UHD package makes for an awesome addition to the 4K collection and Highly Recommended.

Read our review for An Unexpected Journey - 4K UHD Blu-ray

Picking up soon after the events of An Unexpected Journey, the next chapter in the epic-fantasy trilogy based on one book is an unexpected improvement over its predecessor, introducing a few new characters — as far as the original source is concerned — while still managing to stay faithful to Tolkien's vision. In this adventure while in the guild of brave dwarves, Peter Jackson and his team appease the devoted fandom with the appearance of Beorn (Mikael Persbrandt), the shapeshifting giant who's only ever seen changing into a bear, imbuing an air of mystery and generating some well-earned sympathy. Of course, his purpose is simply to set Thorin and his company back on the right path to reclaim the Lonely Mountain from the fire-breathing dragon Smaug (Benedict Cumberbatch).

As the film continues, the plot suddenly thickens with a side-journey involving Gandalf to the tombs of the Nazgûl, which, once again, paves a connection to the original Lord of the Rings trilogy. These minor alterations and interpretations to Tolkien's dearly beloved book pale in comparison to the appearance of Legolas (Orlando Bloom) and Tauriel (Evangeline Lilly), two characters that are surprisingly well integrated into the narrative, not only expanding on Jackson's vision of this epic fantasy but also adding some welcomed drama. Arguably, the more interesting aspects is the hostility between Richard Armitage's Thorin and Legalos's father Thranduil (Lee Pace), as well as the introductions of Bard of Esgaroth (Luke Evans) and and the Master of Lake-town (Stephen Fry). The Desolation of Smaug, unfortunately, ends on a blatant "to be continued" note, yet the story overall is satisfying and largely feels complete, an improvement over its predecessor, hinting at an exciting conclusion.

For a more in-depth take on the film, check out our review of the 3D Extended Blu-ray edition.

Warner Bros. Home Video brings The Hobbit: The Motion Picture Trilogy to Ultra HD as a six-disc package with a Digital Copy code. When redeeming said code via wb.com/redeemmovie or MoviesAnywhere, users are granted access to the 4K digital version in Dolby Vision with Dolby Atmos audio. All six UHD100 discs, three of which contain the extended editions of each film, sit comfortably on either side of three center spindles. They are housed in a slightly thicker than normal black keepcase with a side-sliding slipcover. At startup, each disc goes directly to the standard menu screen with full-motion clips and the usual selection of options along the bottom while the iconic music plays in the background. 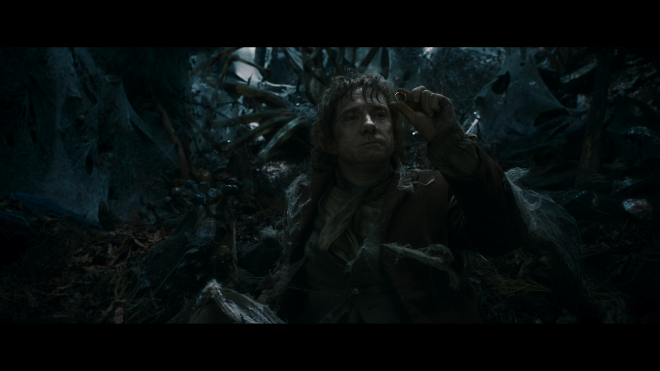 The second adventure in the Hobbit series finds its way to Ultra HD with a remarkably stunning, demo-worthy HEVC H.265 encode that offers a massive upgrade over its Blu-ray brethren. Reportedly coming from a brand-new remaster of the original elements, the native 4K transfer is consistently detailed and razor sharp, exposing the tiniest flaw and imperfection in the clothing, armor, buildings and various weapons. The individual hairs of the entire cast are shockingly even more discrete, and the stitching and fabric in the costumes are amazingly distinct and realistic while the intricate patterns in some outfits, such as in the elvish clothing and armor, are striking. We can better make out every nook and cranny in the stage production, from the small rust spots in the set of Laketown to the individual grain in the wood.

The CG visuals and action sequences, for the most part, hold up well and look sensational, but there are, unfortunately, a few moments keeping the 2160p picture just shy of perfection. There are some instances of very minor shimmering and wavering along the sharpest edges, such as when Thorin stands before Thranduil at around the 50-minute mark and later when Bilbo wanders the halls of the Lonely Kingdom and confronts Smaug. There is also a tiny-weensy bit of flickering in some of the roofs of Esgaroth and again, when inside the Kingdom under the Mountain. They only happen in a couple frames at most and can be easily missed, and thankfully, they are not egregious enough to take away from the overall stunning quality.

Aside from that, however, the real win in this 4K video is the significant improvement in contrast and balance, displaying brilliantly radiant whites throughout and allowing for extraordinary visibility in the distance. Many exterior shots of the New Zealand landscape have that gorgeous "looking-out-the-window" quality to them, and specular highlights are resplendently crisp and narrow, supplying a dazzling shine to the jewelry, an eye-catching twinkle in some of the clothing and a realistic metallic polish in the armor. Another upgrade is the inkier, truer black levels in every scene, from Thorin's visibly oily hair to the outfits of the orcs. Meanwhile, the silky, ebony-rich shadows of Mirkwood and the ruins of Dol Guldur penetrate deep into the screen and maintain outstanding visibility within the darkest corners of the frame, providing the 2.40:1 image with appreciable depth and a lovely cinematic appeal.

With a notably wider array of colors, the Dolby Vision HDR presentation continues to amaze and astound with a richer display of warm, marigold-honey yellows during many well-lit, interior sequences and cold, dark sapphire tint washing over the nighttime scenes. There are also other hues that dramatically pop with an energetic beauty, like the blend of blazing hot yellows, fuschia pinks and magentas blending into the cerulean blues of the sky in shots of sunrises and sunset. There is also the dramatically fuller, tiger orange shade of some red-headed characters and the deep butterscotch hues of gold glimmering with a hot, buttery yellow edge. Likewise, primaries are bolder and more vibrant mixed with the various sepia tans and earthy browns of Andrew Lesnie's teal-orange cinematography. The highly-revealing faces also show a healthier complexion with an attractive rosy-peach tone while exposing every wrinkle, pore and negligible blemish. (Dolby Vision HDR Video Rating: 96/100) 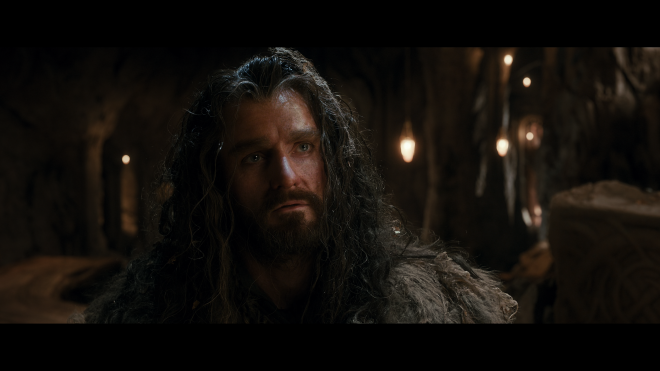 This UHD edition of the fantasy sequel chalks up another win with an impressive, highly-satisfying Dolby Atmos soundtrack that rivals and surpasses its DTS-HD predecessor.

As soon as the music and action begins, listeners can appreciate the improvement in the mid-range, exhibiting the smallest detail with superb, crystal-clear clarity. Whether it's Howard Shore's score or the many action sequences, acoustical details in the upper ranges display outstanding distinction and definition, allowing for each death yell of the Orcs and every clash of metal swords to be heard with amazing precision and directionality. The sizzle of Smaug's fiery breadth is discrete and accurate as it echoes throughout the room and into the top heights, creating an awesome half-dome soundstage. All the while, dialogue remains precise and very well-prioritized amid the loudest, chaotic segments.

As has always been the case, a powerfully-commanding, robust low-end provides each thump of the horses' hooves and stomp of a Warg's paw with a palpable presence while every battle scenes will have the floor rumbling and couch shaking. Shore's thrilling music also enjoys a great deal of weight, especially when hearing the cellos and the low-pitched brass instruments. The best moments are the scenes with Smaug, as his fire breadth and footsteps come with an authoritative, wall-rattling impact. Bass never really digs deep or ever hits the lower depths, mostly remaining in the mid to upper ranges of extension, but it's enough to disturb the neighbors.

The object-based design also invades home theaters with a variety of subtle ambient effects that play almost non-stop throughout the film's runtime, generating a marvelously immersive and hemispheric soundfield. Several battles come with arrows zooming overhead, swords swinging everywhere and orcs swarming from every direction with awesome effectiveness. Like in its lossless predecessor, the footsteps of orcs walking on the rooftops are a demo-worthy highlight, as though crawling directly above the listener. Panning is fluid and flawless, creating a stunning 360° environment that's enveloping, making for a sensational listen and complement to the amazing video. (Dolby Atmos Audio Rating: 96/100) 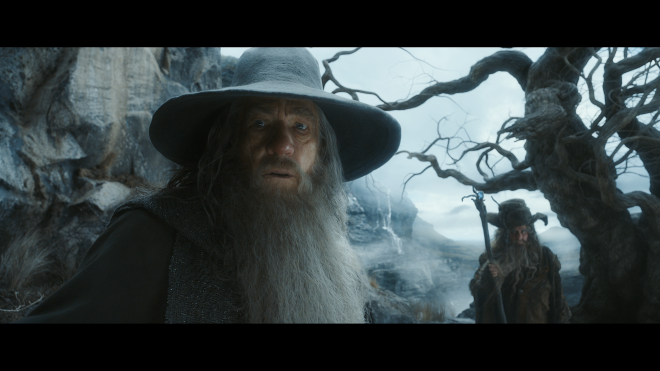 This UHD edition of The Hobbit Trilogy is a standalone release without any of the previous bonus features ported over. 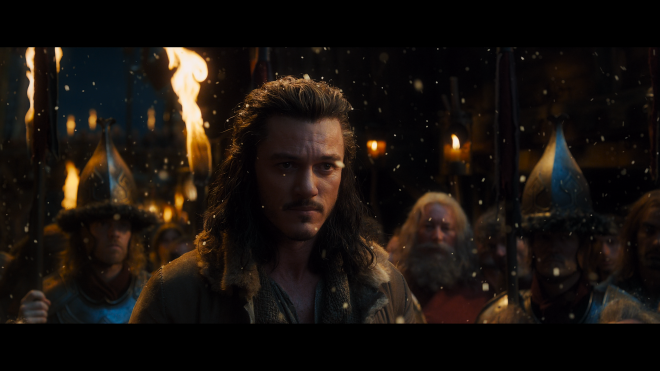 Picking up soon after the events of An Unexpected Journey, Peter Jackson's The Desolation of Smaug takes moviegoers and Tolkien fans back to Middle-earth for another adventure in the company of dwarves, a wizard and a mostly reluctant but observant hobbit. This next chapter in the epic-fantasy trilogy improves upon its predecessor and makes a fun follow-up. The adventure continues on 4K Ultra HD with a remarkably stunning, demo-worthy Dolby Vision HDR presentation and a marvelously outstanding Dolby Atmos soundtrack, giving fans a notably fantastic upgrade over its Blu-ray counterparts. Although lacking in special features, the UHD package makes for an awesome addition to the 4K collection and a highly recommended purchase for those impatient for the eventual special edition.