Because Peter Jackson's two Middle-earth trilogies are such iconic films and a long-desired addition to 4K UHD Blu-ray, we are reviewing each film on their own. With new 4K Dolby Vision HDR transfers and new Dolby Atmos audio tracks, each film will be graded accordingly. This overall review of the set will serve as an average of the three regarding the films themselves, their video transfers, and audio mixes.

Read our review for The Two Towers - 4K UHD Blu-ray

"To my amazement, [Peter] Jackson not only surprised me with a fairly faithful interpretation of the first volume in the adventure saga to save Middle-earth, but he also exceeded those expectations with impressive camerawork that beautifully transformed the New Zealand landscape into a fantastical world and felt almost as though I were reading the books all over again. The awesome action sequences and the central theme of good vs evil were further brought to life by the incredibly memorable performances of the entire cast. Looking back and reminiscing on that time, part of the film's greatness is perhaps also its timing, premiering just a few months after the World Trade Center attacks, whisking audiences away to a fantasy world and providing the perfect escapism when it was needed most.

Nearly twenty years later, The Fellowship of the Ring arrives on 4K Ultra HD, once more, just in time with its fantastical escapism and a moment of respite from the real world."
5/5

"Going bigger and bolder, Jackson undoubtedly outdid himself in [The Two Towers] and again, managed to surpass all expectations while also remaining faithful to Tolkien's central theme of the second volume. As the title so eloquently suggests, this plot where we keep inching closer to the volcanic plains of Mordor is, at its heart, a battle of duality, of life's opposing forces pulling and tugging at us to go in one direction or another and of the conflict between good versus evil, doing right versus wrong. And Gollum is pivotal for bringing this to the forefront, as he struggles internally with his desire for the One Ring but also wishing to be rid of it. This is also demonstrated in Saruman's industrialization and exploitation of nature and its resources versus the Ents fighting to preserve it."
5/5

"[One] of my favorite aspects of Jackson's [The Return of the King], which he co-wrote with Fran Walsh and Philippa Boyens, [are the minor alterations for a surprisingly more compelling and poignant tale of heroism and hope]. The bravery, courage and gallantry traditionally associated with heroism is not a purely masculine trait, but it's a quality found in any individual fighting to defend their home and loved ones. This is not only beautifully captured by the actions of Éowyn and Sam but also eloquently expressed by Merry's speech joining the war simply to help his friends rather than any expected loftier ideals. This theme in the third film is all the better when Aragon displays both stereotypically masculine and feminine traits, a confident leader who is also humble and submissive, someone who is viewed as manly but unafraid to show emotion and fear. And it is this balance in his personality that ultimately makes him a great king, a ruler others willingly and gladly follow while audiences proudly cheer to prevail.

It is a well-earned, heartfelt conclusion to one of the greatest film franchises of all time, one that stood the test of time and continues to entertain a younger generation of moviegoers."
5/5

Warner Bros. Home Video brings The Lord of the Rings: The Motion Picture Trilogy to Ultra HD as a nine-disc package with a Digital Copy code. When redeeming said code via wb.com/redeemmovie or MoviesAnywhere, users are granted access to the 4K digital version in Dolby Vision with Dolby Atmos audio. All nine UHD100 discs, three of which contain the theatrical cuts of each film while the extended editions are spread across a pair of UHDs, sit comfortably on either side of four center spindles. They are housed in a thicker than normal black keepcase with a side-sliding slipcover. At startup, each disc goes directly to the standard menu screen with full-motion clips and the usual selection of options along the bottom while the iconic music plays in the background. 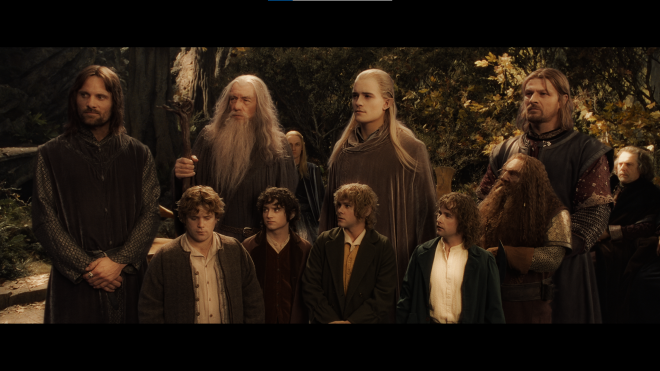 "Reportedly coming from a recent restoration of the original elements and remaster for a fresh 4K digital intermediate, the HEVC H.265 encode definitely delivers the precious goods with several stunning moments that puts the aforementioned Blu-ray to shame. Undoubtedly, this is the best version of the now-classic fantasy-adventure film, and the most immediate difference is a new color timing that removes the heavy greenish-blue tint that previously washed over Andrew Lesnie's teal-orange cinematography. Overall, this makes for a more natural and attractive 4K video with notably improved contrast balance throughout, affording not only more vivid, true-to-life whites but also allowing for better clarity and visibility of background information. In fact, the picture is for a majority of the runtime highly-detailed, exposing the fine stitching in the costumes, razor-sharp hairs and whiskers of the male characters, and lifelike textures in the entire cast during the many close-ups. (Dolby Vision HDR Video Rating: 92/100)"

"The most impressive improvement in this fresh transfer is the better contrast and brightness balance throughout, boasting pitch-perfect, splendidly brilliant whites that make the action pop with sometimes eye-squinting brilliance. A case in point is the dramatic entrance of Gandalf the White where the white light behind him glows with intense radiance and excellent peak luminosity. Specular highlights are likewise extraordinary, supplying a more true-to-life splendor to the clouds in the sky, a narrower sparkle in the jewelry and accessories, and adds more realistic metallic polish to the swords and armor, most notably during The Battle of the Hornburg as the elvish helmets and suits glisten from the glow of the moon and rain. Speaking of which, the 4K video is consistently bathed in silky, raven blacks and remarkable shadow details in the darkest, blackest segments, providing the 2.40:1 image with a gorgeous cinematic quality. The best examples of this are the halls of Rohan and Wormtongue's entire appearance where we see excellent gradational differences between the various shades and still plainly make out the finer aspects of the building or Wormtongue's velvety, furry coat. (Dolby Vision HDR Video Rating: 94/100)"

"Overlooking those, however, the 4K video is magnificent with improved contrast balance, displaying pitch-perfect whites in every scene, from Gandalf's immaculately clean hair to the marble-like walls of The Tower Hall. Interestingly, as in The Fellowship, peak luminosity is on the lower end of the spectrum and not quite as dramatic as we've seen from other releases. Nevertheless, specular highlights provide a narrower radiant glow in the brightest, hottest spots, such as the flowing flames swirling around the palantír or the way Shelob's web glistens the light of Frodo's crystal phial. While the clouds during daylight sequences have a lovely, true-to-life splendor to them, the armor and various weaponry come with a realistic polish and sheen that twinkles in the sunlight. Brightness levels are equally impressive with inky rich blacks in the clothing and dark, velvety shadows that never obscure the finer details but penetrate deep into the screen, providing the 2.40:1 image with an attractive cinematic appeal. (Dolby Vision HDR Video Rating: 94/100)" 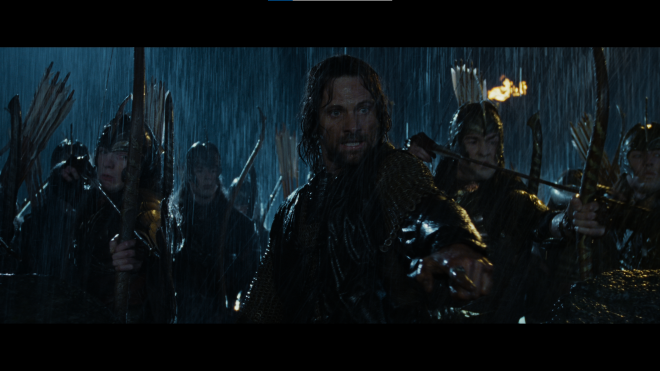 "Immediately, Howard Shore's iconic music fills the room with exceptional, room-penetrating clarity, quickly displaying an extensive mid-range with superb warmth and fidelity in the orchestration. While maintaining remarkable acoustical details from start to finish, even during the loudest, most boisterous action sequences, imaging continuously feels wide and expansive as background activity fluidly moves into the off-screen space and into the top heights, creating a highly engaging half-dome wall of sound. One of the more impressive aspects is the ear-piercing screeches from the Orcs and Nazgûl exhibiting splendidly clean separation and distinction into the upper ranges while the clanging of metal in battle scenes resonate throughout the room and envelop the viewer. (Dolby Atmos Audio Rating: 96/100)"

"Overlooking [a slightly weaker than expected low-end], which brings it down a couple notches, the design's saving grace is how well sound engineers employed and utilized all the channels for creating an awesome 360° environ. As would be expected, the battle scenes at Helm's Deep and Isengard offer, of course, some of the best demo-worthy moments, as arrows fly across the ceiling, debris rains down from all directions and the cries of soldiers from either side are distinctly heard in the distance. My favorite scenes, however, are the quieter ones with the local wildlife of Middle-earth filling the entire room or while traveling through the Dead Marshes, a Black Rider on his fellbeast discretely fly overhead, panning between the channels flawlessly. And then, there are a couple brief moments when Éomer and the Rohirrim are plainly heard riding from behind the listening area. (Dolby Atmos Audio Rating: 96/100)"

"The object-based mix also astounds with various subtle ambient effects bouncing and moving between all the channels with convincing effectiveness, creating an amazing 360° soundscape that lasts from start to finish. The wind faintly blows across the room, and we can practically feel a chill in the air when wandering the Dead Men's cavernous lair. During quieter moments, the heights are often employed with the distant chirping of birds and other wildlife, and water seems to drip from the ceiling when venturing through Shelob's nest while Gollum's taunts echo and fluidly move all around the listening area. Of course, the battle scenes offer the best demo-worthy moments as boulders and arrows fly from one side of the room to the other and debris scatters in every direction. The Nazgûl on their fellbeasts flawlessly pan overhead as every flap and screech is discretely heard, generating an immersive hemispheric soundfield that puts the viewer in the center of the chaos. One of the more impressive moments is hearing the ropes strapping the Oliphaunts tugged and pulled directly above the listener, making an immensely satisfying listen at home. (Dolby Atmos Audio Rating: 98/100)"

There are no bonus features in this set. A more elaborate multi-disc edition of the entire Middle-earth saga from Peter Jackson is due sometime late summer 2021. 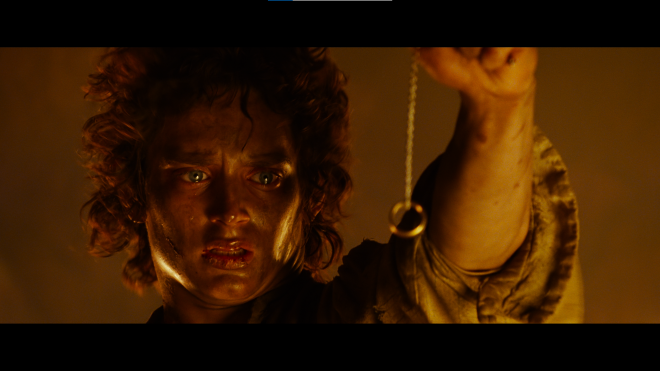 Back in 2001, I walked into Peter Jackson's The Lord of the Rings: The Fellowship of the Ring slightly hesitant and with low expectations, but thankfully, the New Zealand filmmaker did not disappoint in the least. A year later, Jackson surprised and further exceeded expectations with The Two Towers, littering the screen with stunning spectacle that effectively brings fantasy characters to life. And then, without fail, he outdid himself once more in The Return of the King, a breathtaking, Oscar-winning conclusion with excellent performances and dazzling, sweeping camerawork. One of the greatest film franchises of all time journeys to 4K Ultra HD with an exceptional Dolby Vision HDR presentation and a demo-worthy Dolby Atmos soundtrack, providing a notable improvement and satisfying upgrade over its Blu-ray predecessors. Although lacking in special features, the overall UHD package makes for a highly recommended purchase to hold devoted fans over until the next bonus-riddled edition come along.