Walt Disney's Mulan (1998) continues to wow and captivate audiences with a tale that forgoes the studio's traditional formula and archetype to forge a new path with s female lead that does the saving. The animated classic storms the lands of Ultra HD with a gorgeous 4K video, a satisfying Dolby Atmos soundtrack but the same set of bonuses as before. Nevertheless, the package makes a worthy, Recommended addition to the UHD troop.

During its original theatrical run, I didn't care all that much for Disney's Mulan, at first. I went to cinemas somewhat reluctantly and with low expectations to be perfectly honest. At the time, the bad and offensive taste left behind by Pocahontas a few years earlier still lingered in the back of my mind, making me lose a bit of confidence in the studio's ability to produce quality stories. Thankfully, The Hunchback of Notre Dame brought me back into the fold and convinced me to still believe the House of Mouse could deliver excellent animated features. I remember walking out neither completely satisfied nor totally disappointed, but I began thinking whether Disney was starting to hit a slump, which it did the following decade.

Over the years, however, Mulan has slowly grown on me. Today, revisiting this retelling of the Chinese folklore manages to only keep me engaged, but it also makes me laugh, especially Eddie Murphy's mischievous trickster Muschu. More importantly, during my initial screening, I failed to recognize what the filmmakers were actually attempting to do with the plot's central heroine, Fa Mulan (Ming-Na Wen), who was very loosely based on the legendary warrior. It wasn't until some time later, and after repeat viewings with daughter when she was very young, I better came to appreciate Mulan as an early challenger of preconceived gender roles and as one of Disney's first to fully break from their traditional, cookie-cutter princess mold. Today, I really enjoy the classic animated film, and it ranks as a favorite in this household. 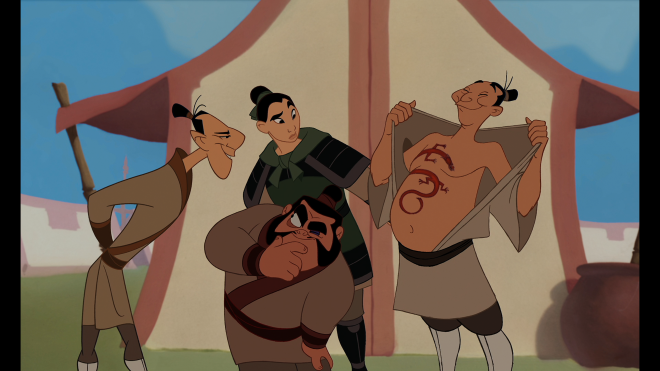 For a more in-depth take on the film, check out our review of the 2013 2-Movie Collection Blu-ray.

Walt Disney Studios Home Entertainment brings Mulan (1998) to 4K Ultra HD Blu-ray as a two-disc combo pack with a flyer for a Disney Digital Copy. When redeeming said code via RedeemDigitalMovie.com or MoviesAnywhere, users should have access to the 4K digital version in Dolby Vision with Dolby Atmos on some streaming platforms. The dual-layered UHD66 disc sits comfortably opposite a Region Free, BD50 disc. Both are housed inside a black, eco-vortex case with a glossy, lightly-embossed slipcover. At startup, viewers are taken to a static screen where owners can choose between the start of the movie or look through the menu.

The Disney animated classic storms the Ultra HD frontlines equipped with an often stunningly gorgeous HEVC H.265 encode that quickly climbs up the ranks to defeat its Blu-ray predecessor.

Likely struck from the same digital intermediate as the BD, the upscaled transfer charges to the battlefield with sharper, more distinct lines in the hand-drawn animation of the clothing, the faces of characters, the rough hairs of animals and Hayabusa's feathers. Thanks to the boosted contrast levels displaying intensely striking whites and an overall brighter picture, viewers can better make out the rock formations of mountains, each leaf in the trees and the individual blades of grass. The elaborate design of the imperial city and of the Emperor's palace is incredibly detailed, exposing the minute patterns and features in the architecture while also enjoying a tighter, more resplendent glow in the specular highlights, most notably as the fireworks and Huolongchushui cannons erupts on screen. In fact, the most impressive moments are not only the last quarter during the fight to save the Emperor, but the ambush and avalanche sequences are also a jaw-dropping spectacle to behold.

Looking as though fresh off the Disney animation assembly line, the HDR10 presentation also marches forward with significantly richer and inkier black levels, supplying the clothes and hairs with a raven silkiness and gloss. Shadows are a dazzling, velvety ebony with excellent delineation in the murkiest corners, providing the 1.66:1 aspect ratio with a lovely cinematic quality and an appreciable three-dimensional feel. Likewise, the 4K video is spectacularly colorful bursting with a sumptuous array of spirited pinks, flamboyant purples, bold magentas and passionate fiery oranges. Many scenes are also bathed in vibrant golden shades, glowing marigold yellows, varied dramatic browns and dynamic sepia tans. Equally captivating is the energetic variety of blues, teals, and greens while reds are far richer and animated than in its HD SDR counterpart, making this a fantastic upgrade for fans to enjoy. (Video Rating: 86/100)

The historical adventure favorite advances into home theaters with a terrifically satisfying Dolby Atmos that impressively complements the visual with a few noteworthy enhancements make this a splendid successor to the previous DTS-HD edition. Imaging feels broad with the score and songs bleeding across the soundstage and into the top heights, exhibiting extraordinary warmth and distinction while maintaining detailed clarity in the mid-range. The vocals are always precise and crystal-clear, revealing excellent intonation. The low-end is nothing particularly standout or noteworthy, but bass is nonetheless adequate and responsive for providing appreciable weight and presence to the music and action.

Occasionally, sound effects travel all around and across the ceiling, like the long squawking sound of a hawk flying overhead, the rustling of leaves in the distance or voices echoing in a large hall, generating several amusingly immersive moments. However, the real win and joy here are the various atmospherics fluidly and convincingly moving between the fronts and into the off-screen space, generating a highly-engaging half-dome soundscape from beginning to end. Aside from the climactic showdown at the imperial palace with fireworks exploding everywhere, the mountain battle and avalanche sequence fills the room with flawlessly panning in the surrounds and the top heights. (Dolby Atmos Audio Rating: 84/100)

The same set of supplements as the previous Blu-ray is ported for this Ultra HD edition and available on the accompanying BD disc.

Over the years, Walt Disney's Mulan has grown on me as something better than I initially assumed during its original theatrical run over two decades ago. The story is appreciated for some of its at-the-time challenging themes and for also breaking from the traditional Disney archetypes. And it does so successfully in a humorous, action-packed tale exploding with captivating visuals. The animated classic storms the lands of Ultra HD with a gorgeous 4K HDR10 video and a terrifically satisfying Dolby Atmos soundtrack, giving fans an excellent upgrade over its Blu-ray counterpart. With the same set of bonuses as previous releases, the overall package makes a worthy, recommended addition to the UHD troop.