Starring Donald Pleasence and Victor Wong, John Carpenter's Prince of Darkness remains a smart and savvy supernatural flick, oozing in an atmosphere of dread and apprehension while legendary rocker Alice Cooper leads an army of zombified hobos. The horror cult classic awakens from its eternal slumber on Ultra HD with an outstanding 4K video and Dolby Atmos audio presentation but the same set of supplements as before. Nevertheless, the overall UHD package is a Highly Recommended upgrade for loyal, obedient followers. 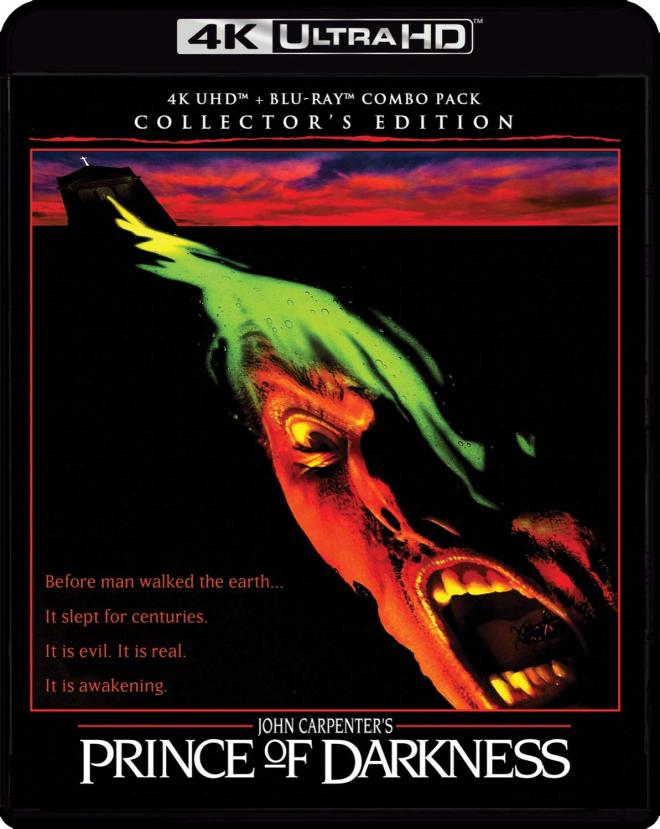 Melding the worlds of theology and prophecies of an ancient evil force with theoretical physics and Nigel Kneale's sci-fi television serials about Professor Quatermass, John Carpenter's Prince of Darkness is a wildly imaginative horror film with some surprisingly intelligent moments. Writing under the pseudonym Martin Quatermass, Carpenter's script essentially explores the potential for modern science to explain the possible existence of the supernatural based on current known reality, a wildly entertaining but ultimately silly exercise involving anti-matter and parallel universes. On the surface, we have the traditional battle of good vs. evil, but the plot also suggests an underlying theme of the pursuit of knowledge and the doors we may not be ready to open.

Representing the two sides of the conversation are Victor Wong as Professor Birack and Donald Pleasence's priest, two wonderful actors adding gravitas and urgency to the silliness, but being a Carpenter feature, some frights and scares are to be expected, of which there are plenty. With deliciously gross and shockingly brilliant makeup and special-effects work, the horror flick is a long-time favorite thanks to the bizarrely creepy visuals, like Susan Blanchard's Kelly transforming into the hideously disfigured monster with a narcissistic personality and a horde of zombie vagrants surrounding the church, led by none other than Alice Cooper himself. Prince of Darkness is ultimately a visually beautiful horror flick with an immersive creepy atmosphere and some genuine smarts, a great Carpenter classic deserving of more attention.

For a more in-depth take on the film, check out our review of the 2013 Collector's Edition Blu-ray.

Scream Factory brings John Carpenter's Prince of Darkness to 4K Ultra HD as a two-disc Collector's Edition combo pack. The UHD100 disc comfortably opposite a Region A locked, BD50 disc inside the standard black keepcase with a cardboard slipcover. At startup, the disc goes to a generic main menu selection along the bottom with a static image and music playing in the background. Fortunately, according to the Shout! Factory website, the limited edition poster and the 7" white-and-red splatter vinyl are still available. 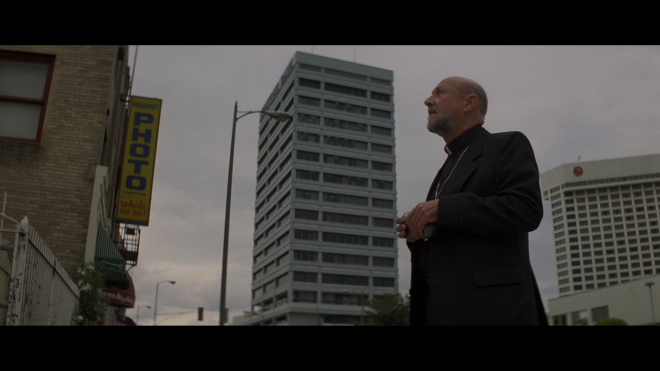 The Carpenter cult classic awakes from its eternal slumber with an outstanding HEVC H.265 encode, offering several notable upgrades over its Blu-ray predecessor. Most apparent is a significantly sharper 4K transfer throughout, showing cleaner, well-defined lines in the architectural features of the church, the city streets and the computerized equipment. We can practically count each brick and see the grain in the wood while also plainly make out every rust stain and calcium build-up on the strange cylinder with green fluid floating inside. The lettering on buildings and walls is a bit more distinct and legible as well, and the individual hairs and whiskers are highly-detailed. A few softer moments are the result of some diffusion photography, but on the whole, the 2160p video is a sharp-looking step-up.

Unfortunately, contrast balance is not quite as impressive, yet it offers a notable gain over the 1080p version and is arguably more faithful to the filmmakers' creative intentions. The stylized cinematography is subdued and restrained, giving much of the movie a grayish, tone-down quality that seems perfectly in line with the plot's creepy, ominous atmosphere. Nevertheless, whites are noticeably brighter and cleaner with a good deal of pop while specular highlights add a more nuanced and subtle sparkle in several areas. The hottest spots, like the light fixtures, the green goo and various metallic surfaces, glow with a narrower yet more intense brilliance while still exposing some of the finer details.

Black levels, on the one hand, are richer and more accurate, but sadly, there isn't much variation or a smooth gradation between the various shades and tones. Also, the finer details within the darkest areas, like the priest's clothing and the basement, tend to be obscured in some scenes. Nevertheless, this is still an improvement from the previous HD edition, and visibility in the blackest corners, for the most part, is above average, providing the 2.35:1 image with an attractive cinematic appeal and an excellent sense of depth.

Similarly, colors, on the whole, also seem somewhat restrained and tone-down, likely affected by the contrast balance yet arguably true to the stylized intentions. Much of the cinematography favors a warmer yellow and earthy brown palette, showering the action with a fuller, wider range of tans, beige, sepia and mocha complemented by richer, golden honey hues in the basement and the fiery marigold glow from the candles. At the same time, greens are livelier and more dynamic, especially the liquid swirling inside the cylinder looking more seaweed and emerald, and reds are also more vibrant and animated, such the slimy, gruesome makeup effect on Kelly. Speaking of which, facial complexions appear healthier with peachy rosier tones and lifelike textures, revealing every pore and wrinkle of the cast,

Bathed in a fine layer of natural grain throughout, the Dolby Vision HDR presentation has a lovely film-like quality and is an excellent upgrade over its predecessor. (Dolby Vision HDR Video Rating: 86/100) 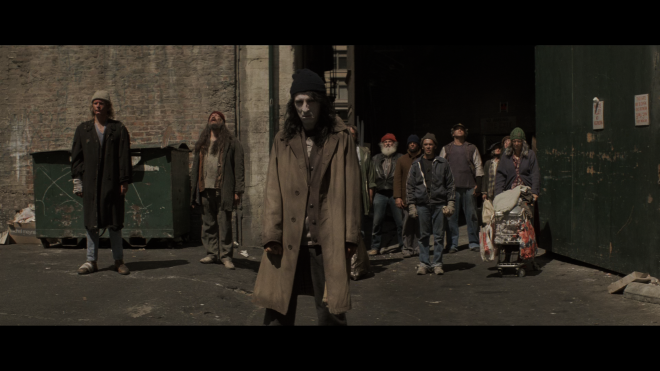 Similar to what they did for their They Live release, Scream Factory unleashes another Carpenter favorite to UHD with a trio of listening options: a pair of DTS-HD MA tracks in 2.0 stereo and 5.1 surround sound and a new, highly engaging Dolby Atmos soundtrack. Naturally, the latter was and is the top choice, delivering not only an impressive upgrade but the best of the bunch. With precise, well-prioritized dialogue, the largely front-heavy presentation, as it should, endlessly feels broad and spacious as background activity fluidly moves across the screen and into the top heights, generating a highly-engaging, half-dome soundstage. Occasionally, some mild atmospherics subtly bleed into the surrounds, nicely expanding the soundfield with excellent directionality. The overheads are relatively silent, but that's to be expected in a sound design of this vintage.

However, the synthesized score of Carpenter and Alan Howarth does much of the legwork, exhibiting exceptional fidelity and crystal-clear clarity in the mid-range. As in the review mentioned above, the music is continuous and constant, flawlessly extending into the sides and heights with a great deal of warmth and clean distinction in the instrumentation, maintaining a splendidly active and immersive soundstage from start to finish. The low-end delivers a clean, accurate bass response that always feels appropriate to the on-screen visuals, providing the music and action with wonderful weight and presence. (Dolby Atmos Audio Rating: 88/100)

** Please note the package on the back incorrectly labels the Dolby Atmos mix as 7.1 and that the Blu-ray comes with a DTS-HD Master Audio 7.1 soundtrack. ** 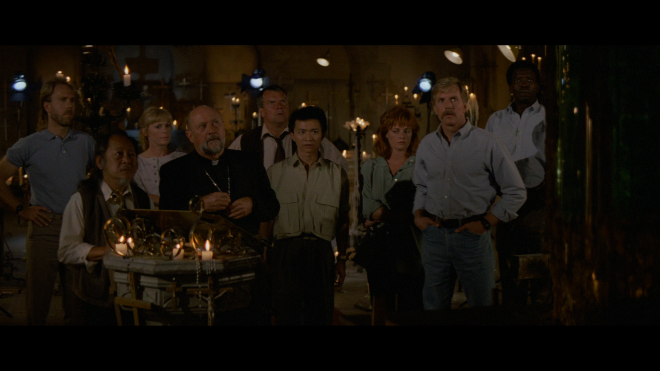 For this Ultra HD edition, the same bonus material has been ported over and only available on the accompanying Blu-ray disc while the UHD features only the commentary track. 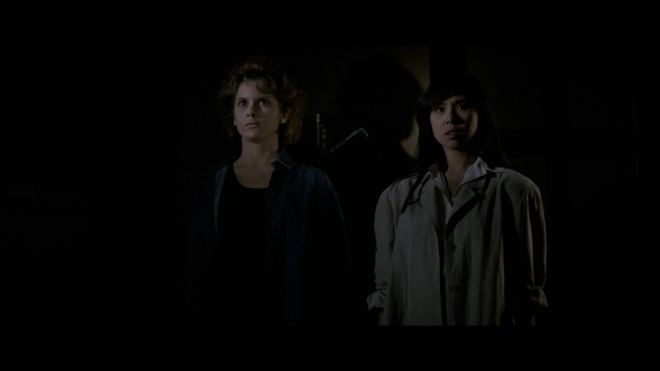 Although it can fall a bit on the corny side, Prince of Darkness remains a long-time favorite in the John Carpenter canon of horror films, starring Donald Pleasence and Victor Wong. Showing some smarts and savvy in a plot about science trying to make sense of the impending apocalypse, Carpenter establishes an atmosphere of dread and apprehension while legendary rocker Alice Cooper leads an army of zombified hobos. The horror cult classic from its eternal slumber on 4K Ultra HD with an outstanding Dolby Vision HDR video and an awesome Dolby Atmos soundtrack, making the overall presentation a notable upgrade from the previous Blu-ray edition. Although porting over the same set of supplements as before, the overall UHD package nonetheless makes a worthy, highly recommended addition to the 4K library.