Starring Roddy Piper and Keith David, John Carpenter's sci-fi horror satire They Live remains a poignant censure of consumerism and classism where the rich and powerful are actually alien creatures lulling society into conformity and compliance. The cult classic transmits its subliminal messages on Ultra HD with an excellent 4K presentation, an outstanding Dolby Atmos mix but the same set of supplements as before. Nevertheless, the overall UHD package is a Highly Recommended upgrade for loyal, obedient fans. 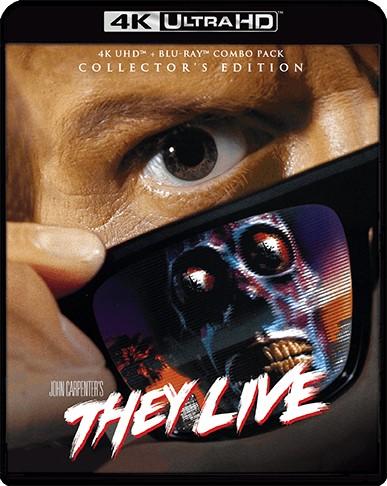 A blend of science-fiction, horror and action with a healthy dose of dark comedy, John Carpenter's cult classic They Live plays both as a subversive allegory on modernity, though largely lacking in subtlety, and a vociferous censure of it in a vehement and vulgar display of sociopolitics. However, instead of this being a fault, it is the film's overall point and charm, an unambiguous and tangible theme Carpenter drives home without also bashing the audience's head with it. The deliciously hilarious scene at the bank where professional wrestler Roddy Piper delivers one of the best-known lines is an excellent example of a director balancing a larger metaphor with a flagrant outcry. Fascinatingly, given the world's current state of affairs, the story's exploration of classism and economic anxieties feel all the more poignant and pertinent, a universal theme against the conservative worldview for laissez-faire capitalism.

Going against his WWE persona, Piper's unemployed drifter is a down-and-out working-class Joe simply referred to as "Nada" — Spanish for nothing. He is nobody, and he is everybody. The brawny, penniless man blends into the crowd unnoticed, unseen and mostly disregarded. Opposite him is the equally terrific Keith David as hard-working construction worker Frank, a smart man aware of how the system works but finds life easier walking the straight and narrow line designed by that society which controls the gold. The pair of nobodies represent the rest of us, a duo of mostly optimistic, blue-collar guys who still believe in the American dream as long as they follow the rules, do a hard day's work and quietly wait for their chance to succeed.

Sadly, despite their desires for a better life, they've grown apathetic, conceding and accepting to abide by a system where only the rich and well-connected are assured a comfortable lifestyle while the rest perish in financial ruin. Ultimately, Carpenter's They Live paints a bleak totalitarian society of compliance, obedience and subjugation through advertisement and consumerism. It's a spectacularly entertaining commentary that leaves little room for suggestive imagery because concealing his intentional message would mean backsliding to those same tactics he's opposing. And ironically, the allegorical satire continues to make for a bubblegum-chewing, kick-ass good time at the movies.

For a more in-depth take on the film, check out our review of the 2012 Collector's Edition Blu-ray.

Scream Factory brings John Carpenter's They Live to 4K Ultra HD as a two-disc Collector's Edition combo pack. The UHD100 disc comfortably opposite a Region A locked, BD50 disc inside the standard black keepcase with a cardboard slipcover. At startup, the disc goes to a generic main menu selection along the bottom with a static image and music playing in the background. Fortunately, according to the Shout! Factory website, the exclusive, limited edition NECA action figure of Keith David and the 7" bubblegum-pink vinyl are still available. 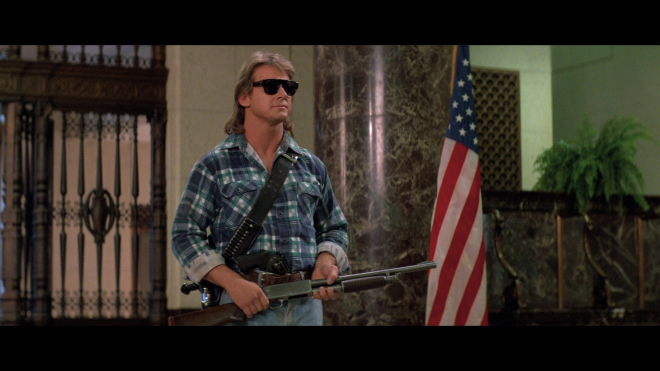 The cult sci-fi horror classic transmits its subliminal messages on Ultra HD with surprisingly effective results, which will have fans obediently consuming this over its Blu-ray predecessor. The HEVC-encoded transfer comes with better, cleanly defined lines in the buildings, the shantytown and the streets of Los Angeles. We can also better make out the lettering on various consumer products, revel in the slimy ugliness of the alien creatures and see every pore and scare on Roddy Piper's face. For the most part, the sharper details and the uptick in the overall definition make for a noteworthy upgrade. However, there are a few moments where resolution dips and looks a tad blurrier than its best parts. A couple of other areas show evidence of very mild noise reduction and digital touch-up, most noticeably in the hotel scene when Nada shares his traumatic past and his face looks slightly smoother and less grainy than on the Blu-ray. But aside from that, the 4K presentation is otherwise in excellent shape.

Within the first few minutes, we can quickly note the improvement in contrast and brightness balance, supplying the action with cleaner, more immaculate whites in the clouds and clothing, like daylight sequences outside the church or Gilbert's tuxedo shirt. Overall peak luminance, however, falls on the lower end with a few areas having more of a blooming effect that obscures the more trivial aspects, such as the fluorescent lights in the underground tunnels. There are also a couple areas where the 2160p picture suddenly goes flat and lackluster, such as when Nada and Frank are in the hotel room or when Nada hides with others from the riot police or when the two men initially enter the safe house and are given the contact lens.

Nevertheless, the boost in specular highlights makes for a more pleasing 2.35:1 image that ultimately feels more film-like and cinematic, furnishing many other areas, such as Holly's jewelry and Cable 54's large insignia hanging behind the alien newscasters, with a crisp, realistic polish. The silver vest in Gilbert's tuxedo likewise has an impressive sheen and glossiness that clearly shows it was made from a silky material. Meanwhile, black levels are also a bit inkier and truer than in previous editions with excellent shadow delineation in the darkest, blackest shadows, providing a majority of the action with good, appreciable depth.

Although not a dramatic, night-and-day difference from its HD SDR counterpart, the Dolby Vision HDR presentation nonetheless displays a slightly richer array of primaries, particularly the splashes of deep crimson reds in various objects and the aliens and the candy rose shine in the police sirens. Greens are a bit lusher and livelier in the surrounding foliage and in the alien electrical signal while blues in clothing and the lighting have a more cobalt glow to them. Likewise, secondary hues have a warmer, more welcoming appeal, giving Holly's red hair a slightly more orange brilliance while the aliens' true colors are a more vibrant cyan, cerulean shade. Facial complexions are also more accurate and natural with a peachy-reddish tone in the cast and lifelike, highly-revealing textures. (Dolby Vision HDR Video Rating: 84/100) 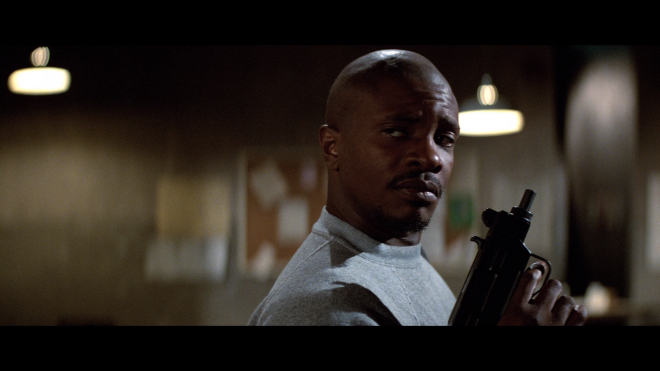 True to form, Scream Factory unleashes this cult gem with several listening options: a pair of DTS-HD MA tracks in 2.0 stereo and 5.1 surround sound while the third is a new and surprisingly awesome Dolby Atmos soundtrack.

As just mentioned, the Atmos upgrade is not only impressive but comparatively, is also the best of the bunch and the clear winner with precise, well-prioritized dialogue and an outstanding soundfield that never feels forced or exaggerated. Although it remains mostly a front-heavy presentation, as it should, the background activity fluidly moves across the screen and bleeds into the top heights, generating a highly-engaging, half-dome soundstage. Several other atmospherics also spread and pan into the surrounds and ceiling with excellent, flawless directionality. The scenes with police helicopters are the most noteworthy as they circle directly overhead for creating an immersive, hemispheric soundfield.

The best part is arguably how much the score benefits from the extra-breathing room, displaying exceptional definition and fidelity throughout. The music bleeds into the sides and heights with welcoming warmth and clean distinction in the instrumentation while the mid-range exhibits crystal-clear clarity and cleaner detailing in the upper frequencies, maintaining an actively engaging and expansive soundstage from start to finish. The low-end also feels a bit weightier with a slightly more palpable oomph in some areas, providing the action with better depth and presence. However, there is one moment worth noting where the bass oddly digs as low as 20Hz at a relatively low decibel for no apparent reason, starting at around the 01:23:57 mark and continues pulsating for about ten seconds (bass chart). It's not a bad thing, but it's just odd and feels misplaced in the context of the story.

** Please note the package on the back incorrectly labels the Dolby Atmos mix as 7.1 and that the Blu-ray comes with a DTS-HD Master Audio 7.1 soundtrack. ** 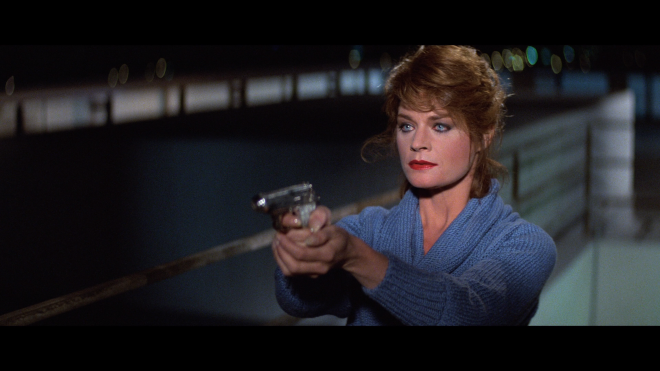 For this Ultra HD edition, the same set of supplements as the previous release are ported over and available on the Blu-ray disc while the UHD disc features a pair of bonuses. 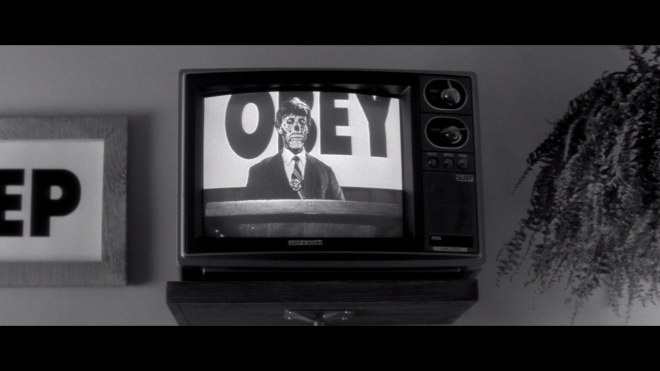 A great mix of sci-fi, horror and action with a healthy dose of dark humor, They Live is a straightforward and to the point censure of the 1980s era of consumerism and excess. Directed by John Carpenter and starring Roddy Piper and Keith David, the film has grown into a much-beloved cult classic about the rich and powerful actually being alien creatures lulling the lower class into conformity and compliance. The sci-fi horror cult classic transmits its subliminal messages on 4K Ultra HD with an excellent Dolby Vision HDR video and an outstanding Dolby Atmos soundtrack, making the overall presentation a notable upgrade from the previous Blu-ray edition that fans will absolutely love. Although arriving with the same set of supplements as before, the overall UHD package nonetheless makes a worthy, highly recommended addition to the 4K collector's library.