Gerard Butler, Michael Fassbender, and a bunch of other burly guys strip down and do a ton of burpees and barrel forth bare-chested into CGI battle glory in Zack Snyders 300 - now on 4K UHD Blu-ray from Warner Bros. This hyper-stylish adaptation of Frank Miller's loose interpretation of historical events is a comic book come to life with outrageous visuals and action sequences. The film enjoys a modest improvement with the new upscaled HDR10 transfer, but the real upgrade is the new Atmos audio mix is a beast well worth cranking the volume for! The same set of bonus features so nothing new there. if you love the movie, 300 on 4K UHD Blu-ray is Recommended

"Haven't you noticed? We've been sharing our culture with you all morning."

The Persian god-king Xerxes (Rodrigo Santoro) is on the warpath with his eye fixed on conquering the free peoples of Greece - in particular, the war-adept Spartans lead by King Leonidas (Gerard Butler). Unable to muster the entire Spartan army to meet the enemy head-on, Leonidas and his personal guard of 300 soldiers will use the terrain of Greece to stop an army numbering in the millions dead in its track - or die trying.

When 300 dropped in 2006, Frank Miller was enjoying a welcome career resurgence -- this was before The Spirit -- and Zack Snyder was a filmmaker on the rise. The film may not have had much historical meat on its bones, but it was a visual beast lighting up the box office and spurring a million guys to subscribe to Men's Health. I was in film school at the time so the visual aesthetic of the film - shooting on 35mm - with entire CGI sets was a piece of debate. Some fervently loved the movie while others thought it was a waste of time. Whichever way you fall on 300 as a film, it's also important to remember this is a thick slab of meathead muscle-bound entertainment. 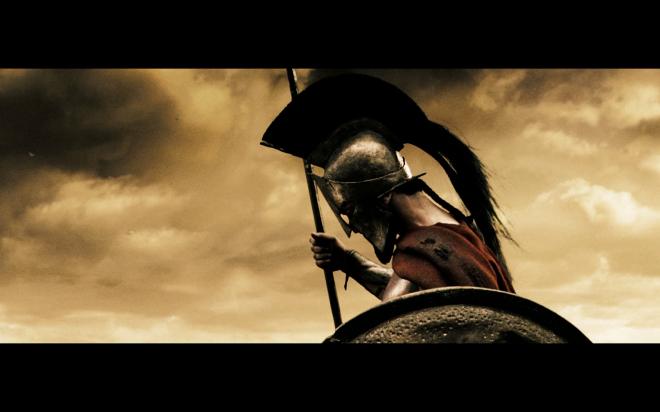 As a consummate pragmatist, I found myself falling in the middle ground. Yes, 300 is a stylishly exciting movie. Given its production with largely CGI locations, beasts, muscles, and characters, it's more of a cartoon akin to Avatar with sporadic physical set pieces. Watching the behind the scenes work it's mostly a bunch of half-naked ripped men with cloaks and shields standing in front of a pink screen with a big styrofoam rock. And the end results do look damn cool. Snyder's brought a visual presence to the movie that would become the signature he has carried with him to virtually every movie he's made since. And it's fun! It's not historically accurate, it's not even really that great of an adaptation of Frank Miller's graphic novel - but it looks amazing and it entertains. It does its job for two hours and gets out of your way. And if you're so inclined you can throw on the goofy sequel for a double-feature and still be entertained.

When it first came out, the film's depictions of various peoples and cultures were kind of a hot-button issue. I've seen this come up again recently with some people trying to argue we shouldn't be idolizing Spartan war mongering or infanticide or yadda-yadda. I rolled my eyes at all that in 2006 and I smack my forehead at it today. If you're getting that worked up about 300 - you're thinking about 300 way too hard. A deleted scene had giant trolls with archers on their backs - this movie isn't meant to be taken seriously. I accidentally got into an argument with a friend about the historically inaccurate lack of armor on the Spartans because I didn't realize he wasn't kidding and was actually upset about it. Aside from the existence of key characters, the date 480 B.C., and the location Thermopylae - nothing about this movie is historically accurate. Even the Spartan government system is misrepresented and inaccurate so it's not even worth debating. Don't hurt yourself.

You want a generally pretty good and fairly accurate version of this story, pull 1962's The 300 Spartans with Richard Egan off the shelf. To be honest, though that movie tends to drag. The battle sequences are exciting when they happen - but it takes a while to get there. Zack Snyder's 300 is just a big stylish action movie with CGI blood and sets. If this had been made in the 80s it would have probably starred Schwarzenegger or Stallone as Leonidas. There are ridiculous moments aplenty and in the last 14 years of memes and parodies, a lot of this movie has just gotten sillier. I've never thought this was a perfect movie - it's just a fun diverting way to spend a couple of hours. It was one of the first movies I bought on Blu-ray when the format first hit the streets and it was fun to dive back into it on 4K.

300 attacks 4k Ultra HD Blu-ray thanks to the good folks at Warner Bros. in a two-disc 4K UHD + Blu-ray + Digital set. The discs are housed in a standard black 2-disc case with identical slipcover artwork. The included Blu-ray is identical to the original Blu-ray release and has not been updated. The 4K disc loads to a static image main menu with traditional navigation options. The only bonus feature on the 4K disc is the audio commentary

Shot on 35mm and finished on a 2K digital intermediate, this 2.39:1 2160p HEVC/H.265 216p transfer with HDR10 offers fans a modest improvement. When 300 hit Blu-ray in 2007 it was a helluva disc and it still holds up remarkably well in 1080p. This upscaled transfer takes everything that worked about that original presentation, refines it, and makes it a couple notches better. Because of the digital intermediate, there isn't a dramatic night and day difference in detail, but the carefully applied HDR10 grading adds a lot of pop and pizzaz to the unique color scheme of the film.

As I said, details don't gain a huge improvement here but there are some notable refinements. Close-ups of faces, clothing, and the practical sets in Sparta do enjoy a more detailed presence. Textures in the linen cloaks, skin pigmentations, or practical makeup all enjoy a nice uptick. Film grain also has a much more stable and refined presence and isn't as noisy or intrusive as it can look on the 1080p Blu-ray.

The big win here is the HDR grading. This was such an intentionally stylish film and it comes through beautifully here. The film's golden/amber base lets the yellow tones breathe a little allowing for more natural flesh tones to come through. Primaries - such as they are - do pop with reds being the obvious standouts. I hadn't realized before but blue really isn't a color that shows up a whole lot in this film. Black levels are deep and inky giving the film a terrific three-dimensional presence and the added shadow nuances during the "night" sequences offer a welcome gradience from light to dark. During the storm sequence and the Persian ships are crashing into the rocks, I felt like I was seeing more of the details in those ships than I could on the SDR Blu-ray. Whites are also more crisp and clean without any blooming. Whites of the eyes in the Spartan helmets feel like they stand out more now.

While I will say this is an overall much better presentation than the original 1080p disc, the one caveat I make is for the CGI. There is a lot of it here obviously. Some of it works remarkably well and still holds up. Other moments not so much. The HDR grading can make a lot of the more weightless CGI effects hover more than they did previously. Digital flames being one notable example - the blood splatters is another. When Xerxes places his giant hands on Leonidas' shoulders the odd effect stands out even more now. Those are small nitpicks really. While it would have been awesome for them to go back and render the effects again and craft a new native 4K transfer, overall this is an excellent visual upgrade.

The big A/V gain for this release of 300 is the new Dolby Atmos audio mix - Dolby TrueHD 7.1 default. Right out of the gate, this mix is a beast. The movie doesn't even get past the Warner Bros and production company logos before LFE, surround, and height effects start punching in. The first crack of thunder as baby Leonidas is being inspected immediately punches the verticals with the bass tones rumbling in with David Wenham's narration taking centerstage. Right away from these first moments, the mix offers up much more atmosphere and channel spacing than I noticed with the original 5.1 mixes (which are not included on this disc)

When the main film actually gets going with the arrival of the Persian messenger to Sparta, the mix offers a notable surround presence to Sparta with people milling about. Throughout every scene - even quiet moments - there's some sort of sound effect punching the channels keeping them active. But the real feast begins with the battle sequences. That first assault is damn impressive with the sounds of shields, swords, spears, and screaming men crashing throughout the soundscape. And then when the arrows rain down on them and they're "fighting in the shade" the verticals offer distinct zips as arrows fall and land all around the channels.

Throughout dialog is crystal clear without any issues. Tyler Bate's excellent score that more than once pulls from Elliot Goldenthal's amazing work on Titus accents the movie perfectly with low notes giving a little extra bass rumble for extra excitement. Levels are spot on without any need to adjust - I played this one louder than normal for the fun of it and it was great, but even at modest levels it's on point. As a whole, the Atmos mix is the big reason to upgrade.

Sadly, nothing new added to the bag of goodies here. The great commentary track with Zack Snyder, Kurt Johnstad, and director of photography Larry Fong is the only bonus feature that makes it to the 4k disc. Otherwise, all of the other previously available bonus features are found on the Blu-ray. I hadn't heard the commentary in a decade so it was nice listen and some fo the old bonus features still work - a new retrospective feature would have been cool as this movie was a big career moment for Butler and Snyder both.

Zack Snyder's 300 is still a fun show. Far from perfect - let alone historically accurate - it's a showcase of visual storytelling talent when a movie can get us excited about a bunch of guys surrounded by CGI visual effects. The action is fast and bloody and delivers the adrenaline punch genre fans want from a movie like this. Don't overthink it, kick back and enjoy it. Warner Bros. upgrades the 300 Spartans with an upscaled 2160p transfer that offers a notable improvement over the previous Blu-ray release thanks to a smartly applied HDR10 grading. The real reason to upgrade is the Atmos mix. The movie always sounded impressive, but this track takes everything that worked before and enhances it for a richly immersive experience. Bonus features may be the same lot as before, but it's a pretty solid set just the same. If you're a fan itching to upgrade to 4K, you won't be disappointed. Recommended.