With Robert Downey, Jr. and Jude Law reprising their roles, Guy Ritchie's Sherlock Holmes: A Game of Shadows is on par with its predecessor but adds a layer of comedy and wit to sustain our interest until the end. The game is afoot on Ultra HD with an excellent 4K HDR10 presentation, the same DTS-HD MA track and bonus material. Nevertheless, the UHD package is Recommended for fans of the series and completists. 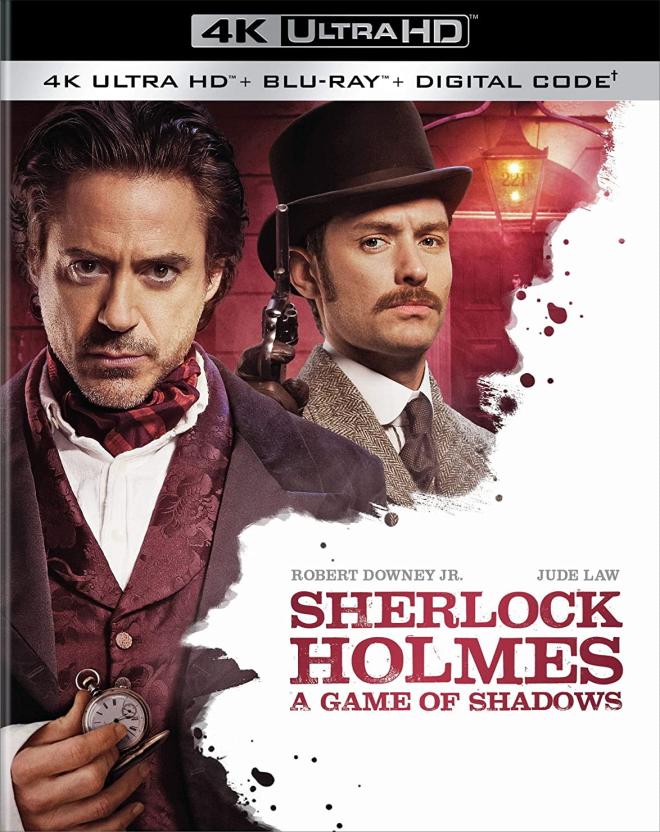 Guy Ritchie also returns to the director's chair with his signature visual style, providing little surprises but injecting some welcomed humor and rapid-fire wit to action and characters. He also toys with cross-genre elements, seamlessly weaving between political thriller and espionage adventure but showing a great deal of love for his own blend of Victorian western. A personal highlight is Downey's Holmes riding a pony into the German border while the late Ennio Morricone's musical motif from Don Siegel's Two Mules for Sister Sara plays in the background.

For another take on Sherlock Holmes: A Game of Shadows, you can read our review of the 2012 Blu-ray HERE.

Warner Home Video brings Guy Ritchie's Sherlock Holmes: A Game of Shadows on Ultra HD Blu-ray as a two-disc combo pack with a Digital Copy code. When redeeming said code at WB.com and MoviesAnywhere, users have access to the 4K version in Dolby Vision with Dolby Digital Plus 5.1 audio. Housed inside a black, eco-vortex case with a glossy cardboard slipcover, the dual-layered UHD66 disc sits comfortably opposite a Region Free, BD50 copy. At startup, viewers are taken to a generic static screen with the usual options along the bottom and music playing in the background. 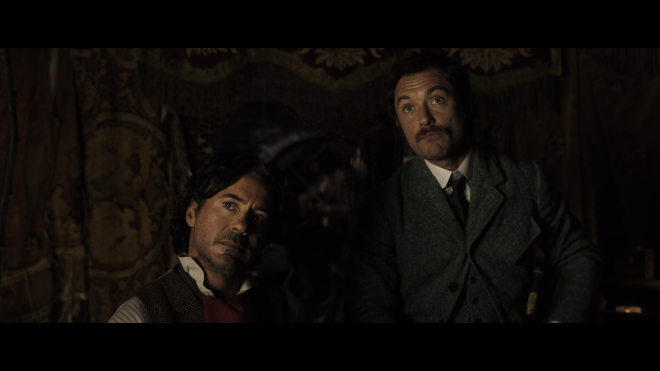 The game is afoot once again on Ultra HD, equipped only with an insolent wit and an excellent HEVC H.265 encode. Similar to the first film, Philippe Rousselot's heavily-stylized cinematography makes for a limited palette, going for a gritty, grimy and near-monochromatic aesthetic with lots of dreary, overcast greys. Nevertheless, primaries are notably fuller with blues, in particular, benefitting a welcomed boost, fitting with the filmmakers' deliberate look, while reds and greens are more accurately rendered. The real win in the HDR10 presentation, however, is the enhanced secondary hues with the amber and sepia tones supplying many of the visuals and action sequences with a warm old-fashioned feel while explosions ignite the screen with vibrant fiery oranges and rich golden yellows.

Brightness levels also profit from the hostile takeover, making for a darker picture overall and bathing every scene with inky, raven blacks, from the Victorian costumes to the various clothing accessories worn by the cast. Thankfully, details remain plainly visible within the darkest, murkiest corners of the frame while the silky shadows penetrate deep into the screen, providing the 2.39:1 image with appreciable depth and lovely cinematic appeal.

On the other hand, the same can't be said for the overtly restrained contrast though there is a small, appreciable improvement. Again, the stylized gritty aesthetic comes with rather limited, toned-down whites although, on some occasions, such as in the clothing, they appear a tad more vibrant and pop with energy. Likewise, specular highlights show a minor jump, adding a crisper, narrower sparkle in the brightest, hottest areas and in the glow off wet and metallic surfaces.

Also, as mentioned in the review of the first movie, the 4K video offers a welcomed uptick in overall definition, but it's not quite the night-and-day difference over the previous Blu-ray. Although a good chunk of the runtime shows better detailing and clarity of the background information, much of the movie falls on the softer side of things. Shot in a combination of traditional 35mm film and HD digital cameras that maxed at 2K resolution, which was mastered to a 2K digital intermediate, the upscaled transfer displays sharper lines in various objects and the cobblestone streets of London and Paris. Close-ups of the cast especially are highly-revealing, exposing negligible blemishes with lifelike textures and healthy, rosy complexions, making this UHD edition, in the end, a welcomed step over it HD SDR counterpart that fans will want in their collection. (Video Rating: 78/100) 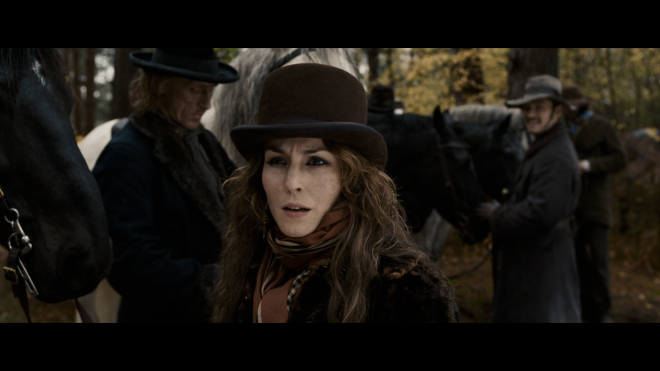 Again, Warner Home Video has seen to fit repurpose the same DTS-HD Master Audio 5.1 soundtrack enjoyed on the previous Blu-ray. The option for an object-based track would have frankly added some value to the gonzo visuals, but to be fair, this lossless mix nonetheless remains reference-quality audio sure to test anyone's system. The mid-range is superbly sharp with outstanding acoustical detailing, exhibiting distinct clarity during the loudest segments and accurate fidelity in the musical score. Imaging continuously feels spacious and expansive with excellent priority and intonation in the vocals. The low-end is incredibly powerful and dynamic with exceptional response, supplying the action with wall-rattling intensity and a potent, palpable presence. The surrounds are endlessly occupied with various atmospherics, from the busy hustle and bustle of the cities to the sounds of local wildlife and uproar of the Moriarty's manufacturing plant.

When applying the receivers' Dolby Surround or DTS: Neural:X up-mixing functionality, the ceiling channels are effectively employed with subtle ambient effects that convincingly bleed overhead, and Hans Zimmer's score wonderfully expands to all the speakers, creating an awesomely immersive and highly-engaging soundfield.

For a more in-depth take on the audio quality, you can read our review of the Blu-ray HERE. (Audio Rating: 96/100) 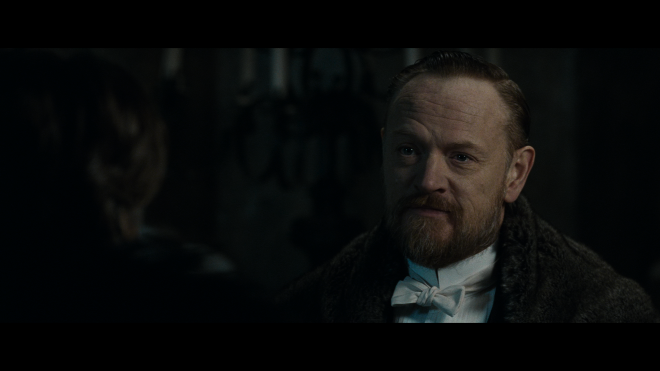 All supplemental material is on the accompanying Blu-ray disc. 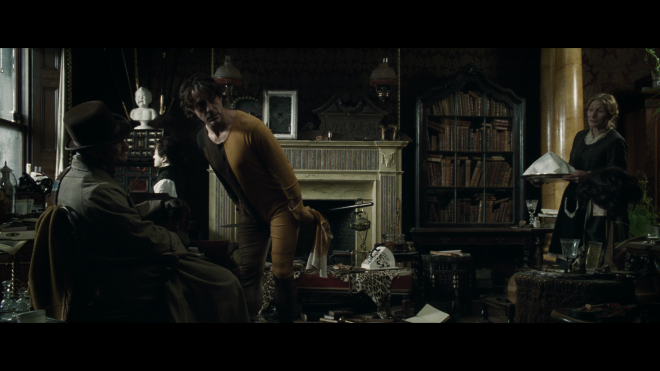 Guy Ritchie returns to steer the action-adventure Sherlock Holmes: A Game of Shadows, a direct follow-up to his grittier reinterpretation of Arthur Conan Doyle's legendary character. With Robert Downey, Jr. and Jude Law reprising their roles, the pair of witty, bantering sleuthhounds are pitted against Jared Harris's somewhat bland Professor Moriarty but saved by Ritchie's usual visual panache, Noomi Rapace and Stephen Fry. The game is afoot on Ultra HD with an excellent 4K HDR10 presentation, providing a notable step-up over its Blu-ray counterpart, but features the same DTS-HD MA 5.1 soundtrack and sorely lacking bonus material. Nevertheless, the UHD package is recommended for fans of the series.