Guy Ritchie's Sherlock Holmes (2009) is a gritty and rugged reinterpretation of Arthur Conan Doyle's celebrated supersleuth made memorable largely for Downey's excellent performance. The movie sleuths its way to Ultra HD with a good-looking 4K HDR10 presentation, an identical DTS-HD MA 5.1 audio track and the same set of supplements as the previous Blu-ray. Nevertheless, the UHD is Recommended for fans of Downey and the series.

In another example making clear he is a treasured talent, Robert Downey, Jr. stars as the titular character of Guy Ritchie's Sherlock Holmes, a gritty and rugged version of Arthur Conan Doyle's celebrated supersleuth of Victorian London. Notwithstanding Downey's memorable performance with his comical eccentrics and social oddities, Ritchie's adaptation is really a hammy caricature of the legendary cerebral Master of Deduction, an essentially updated rendering for contemporary audiences. It's not all bad, however, since the director's signature style, particularly the slo-mo action, suits Holmes's strictly-follow-the-evidence sleuthing genius, which is cleverly opposed by Mark Strong's supernatural aristocratic Lord Henry Blackwood, making him an excellent foil.

Jude Law also stars as Holmes's loyal companion, war veteran and surgeon Dr. John Watson, who impressively holds his own in this otherworldly game of wits, but Rachel McAdams' femme fatale seems lost between plot device and genuine love interest on equal ground with the boys. In either case, Law and McAdams provide plenty of chemistry for this superhero-like Holmes while Ritchie's visuals and aesthetic add enough thrills to entertain until reaching that satisfactory conclusion. Holmes's boxing skills are, arguably, the film's more noteworthy segments, an ingenious and captivating method of showing his sharply keen intellect

For another take on Sherlock Holmes, you can read our review of the 2009 Blu-ray HERE.

Warner Home Video brings Guy Ritchie's Sherlock Holmes on Ultra HD Blu-ray as a two-disc combo pack with a Digital Copy code. When redeeming said code at WB.com and MoviesAnywhere, users have access to the 4K version in Dolby Vision with Dolby Digital Plus 5.1 audio. Housed inside a black, eco-vortex case with a glossy cardboard slipcover, the dual-layered UHD66 disc sits comfortably opposite a Region Free, BD50 copy. At startup, viewers are taken to a generic static screen with the usual options along the bottom and music playing in the background. 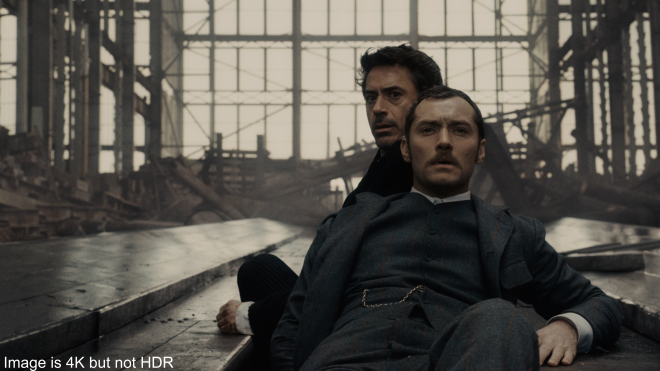 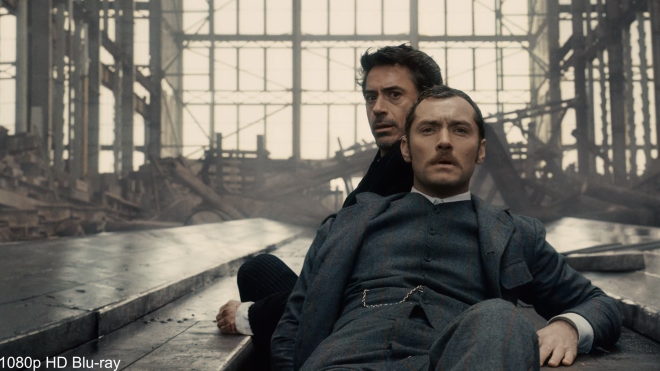 The Master of Deduction sleuths his way to Ultra HD with a great-looking and largely satisfying HEVC H.265 encode, but it's not quite the apocalyptic upgrade from its Blu-ray predecessor. To be sure, the new 2160p picture is a welcomed step-up in some areas, making this the preferred method of enjoyment. However, it doesn't show a massive or considerable difference, which likely has to do with Philippe Rousselot's heavily-stylized, ultra-grimy cinematography.

Contrast, for one, is heavily subdued and controlled, furnishing the action and sleuthing with a grey, polluted and overcast atmosphere while whites are noticeably toned down yet clean. On the other hand, specular highlights display a better, brighter intensity with a tighter, narrower glow as light glares off faces, the sunshine gleams through the edge of clouds and the wet surface sparkle with brilliance. Most notably, the flames from explosions and lanterns expose a bit more distinction and clarity within the hottest areas sections, as the screen brightens in sudden flashes of fiery oranges. Be that as it may, much of the 4K video is rather inconsistent with several instances of blooming mildly washing over some of the finer aspects, which is arguably the result of the filmmaker's aesthetic intent and not an issue with the encoding.

The same could be said of overall definition with many sequences looking better than others while a good chunk of the runtime falls more on the softer side of things. The movie was originally shot in a combination of traditional 35mm film and a pair of HD digital cameras that maxed at 2K resolution, and those elements were later mastered to 2K digital intermediate. Comparatively, this upscaled transfer enjoys a welcomed and appreciable uptick, showing slightly sharper details in the production design and architecture of late 19th-century London. The small trinkets, gadget and various other objects are observable while the lettering of newspapers and the threading in the costumes are a bit more distinct, and faces are quite revealing. Still, it's a night and day difference over the HD version, which has much to do with the fixed resolution levels of the original source.

Nevertheless, the biggest and most discernible gain in this HDR10 presentation comes by way of improved brightness levels. Admittedly, this makes for a darker picture overall, which is immediately apparent in the opening moments, showering every scene and conversation in rich, luxurious blacks, from the clothes and accessories to background objects in the distance. While maintaining strong detailing and visibility within the murkiest corners, shadows are gloomier and silkier, providing the 1.78:1 image with notable three-dimensional depth. Likewise, colors enjoy a nice boost, as well, looking fuller and a tad more vibrant than its HD SDR counterpart although the selection is somewhat limited by design. The monochromatic palette favors more brown and amber tones, but flesh tones have a lifelike complexion with peachy, rosy appeal around the cheeks, ultimately making this UHD edition a winner. (Video Rating: 72/100) 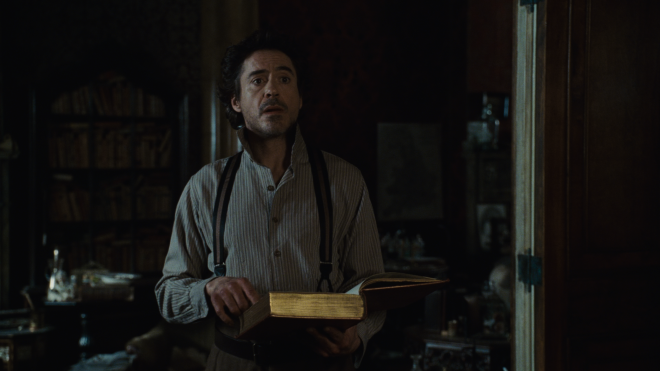 The fight against the supernatural erupts in home theaters with the same DTS-HD Master Audio 5.1 soundtrack enjoyed on the previous Blu-ray. Although an object-based track would have been a welcomed addition, this lossless mix nonetheless remains an exceptional audio presentation that displays a sharp and expansive mid-range, exhibiting excellent clarity in the upper frequencies and during the loudest segments. This produces a satisfyingly broad and engaging soundstage with distinct, well-prioritized dialogue and a vigorously potent, decidedly responsive low-end. The surrounds are frequently employed with the hurly-burly commotion of crowded city streets, the bustling racket of shipyards and the horns of ships blowing in the distance. When applying the receivers' Dolby Surround or DTS: Neural:X up-mixing functionality, the ceiling channels are awesomely effective as various atmospherics convincingly bleed overhead to wonderfully expand the soundfield, and the most notable is the meat plant sequence where Lord Blackwood's echoing voices travels all around the room.

For a more in-depth take on the audio quality, you can read our review of the Blu-ray HERE. (Audio Rating: 94/100) 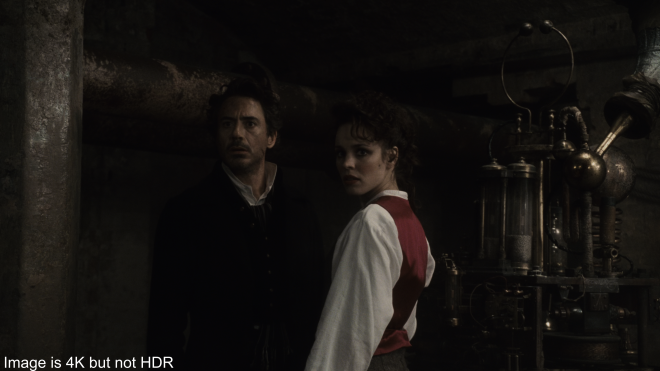 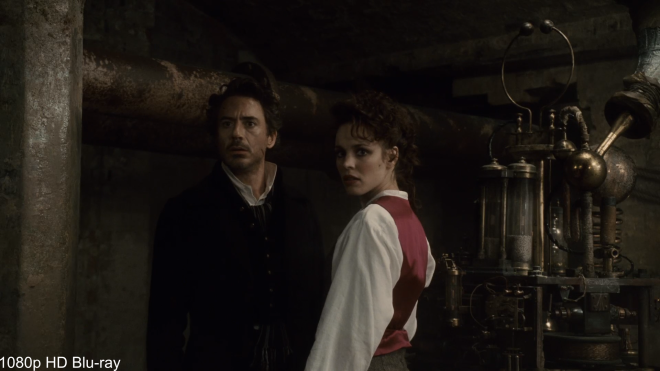 For this UHD edition, the same set of supplements are ported in the accompanying Blu-ray. 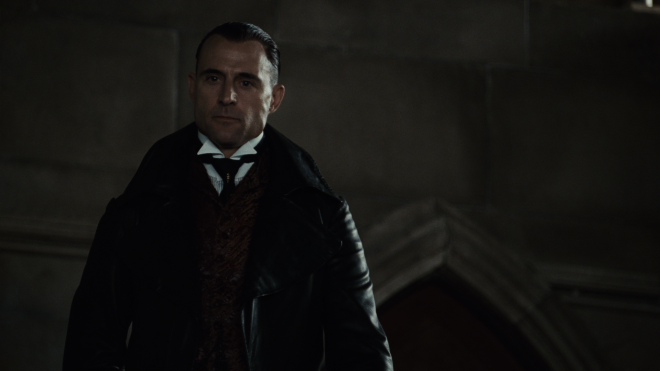 Guy Ritchie takes a break from his usual outlandish gangster comedies to direct Robert Downey, Jr. in Sherlock Holmes (2009), a gritty and rugged reinterpretation of Arthur Conan Doyle's celebrated supersleuth of Victorian London. Co-starring Jude Law, Rachel McAdams and Mark Strong, this modernized take is a fun and visually entertaining mystery actioner made memorable largely for Downey's performance. The movie sleuths its way to Ultra HD with a good-looking 4K HDR10 presentation that delivers a welcomed if only small upgrade over its Blu-ray predecessor and the same superb DTS-HD Master Audio 5.1 audio track. Porting over an identical set of supplements, the UHD is nonetheless recommended.