He's king of the impossible. He's a miracle. He's just a man… with a man's courage. He's Flash Gordon - New York Jets star quarterback and intergalactic savior! Mike Hodges' 1980 sci-fi space opera camp classic has had a hell of a celebration with an impressive release in Europe and the United States. Arrow Video brings Flash to the U.S. offering the same incredible 4K transfer with rejiggered 5.1 audio and the same bonus features - with a few extras they added themselves for this Limited Edition 2-Disc release. If you're not interested in swag but want a massive bonus features collection - this is the set to own.
Highly Recommended.

The favorite childhood movie that I watch at least once a year has pretty much dominated most of my available free time for the last month. Not that I'm complaining! Mike Hodges' 1980 science fiction space opera classic Flash Gordon was long due for a true restoration effort and the 4K Ultra HD Blu-ray home video era was the perfect time for StudioCanal with releasing partner Arrow Video to tackle this classic. This gorgeous, colorful, and impeccably detailed film has never looked this good on home video and worth repeat viewings just to soak it all in. 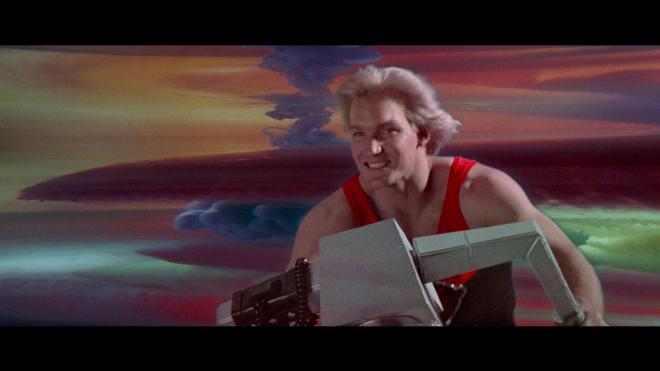 Once I finally got my hands on Arrow Videos' terrific release, I didn't intend to spend much time watching the movie again. The transfer was the same, and 90% of the bonus features were the same. This was supposed to be an exercise in ticking off the boxes and just completing coverage. As with every other time I start this movie, the first time you hear Max von Sydow's gravely ominous voice utter "Klytus I'm bored, what plaything do you have for me, today?" as the earth spins into the screen and a control panel appears with all sorts of disasters spelled out - I can't stop watching it. I tell myself to just skip to my favorite scenes - but then I love it all! You hear a piece of music and you gotta keep going through the whole show.

As you may have read in my review for the Check Disc and the StudioCanal Release, I have a lot of love for this movie. This time around was special because I got to introduce the movie to my little son. Granted, he's too young to know what the hell is happening but watching him react to certain scenes and squeal with delight was worth watching this movie about eight times inside of a month. I cranked the volume especially for this scene and he may not have understood what was happening but hearing him cackle and laugh made my day and watching this again totally worth it:

Now that I've gotten to take a look at both available versions of Flash Gordon in 4K UHD Blu-ray - I can say that while the StudioCanal release is excellent and there is some great swag to be had with that boxset - I like the Arrow Video release better. You get the same bonus feature but also an extra commentary track no present on the StudioCanal disc as well as some extra interview snippets. You may not get the same amount of swag - so if you really needed that sew-on logo patch the StudioCanal release may be worth importing. But if you want a slick package that sits Beautifully on your shelf - the Arrow Video release is the one to roll with. Regardless of which one you choose - this restoration and 4K UHD Blu-ray release has been an amazing summertime gift for fans.

For U.S. residents who don't want to import the U.K. StudioCanal release - or - for U.K. residents who don't need a bunch of swag - Arrow Video delivers Flash Gordon to 4K UHD Blu-ray in a two-disc limited edition set. The discs are housed in a thick, sturdy two-disc black case with reversible insert artwork revealing the iconic original U.S. poster artwork. Also included in the case are a set of six reproduction lobby cards/posters. This Limited Edition release also comes with a 59-page booklet with essays and information about the movie and restoration as well as a reversible mini-poster. The case, booklet, and poster are housed in Arrow's typical sturdy cardboard book-style covers. The DTS-HD MA 2.0 mix is the default audio mix.

Again - this is an incredible restoration effort that easily dwarfs previous home video release. StudioCanal did a hell of a job capturing all of the amazing details and HDR10/Dolby Vision brings the intricate color scheme to bold vivid life. With both the StudioCanal disc and the Arrow Video release in hand, I did some disc flipping to account for any kind of compression anomalies or other shenanigans and there is no difference between them. Bitrates lineup. Not that I thought there would be any difference - I just wanted to cover all bases and assure everyone that regardless of which edition you pick up you're getting the best available.

From the Check Disc Review

"I am very happy to report that no apparent DNR was employed here. Film grain retains a natural film-like quality allowing for a full range of details to survive in every frame. The film looked incredible when it was at a simple airstrip in the beginning or in Zarkov's laboratory - but man, when they get to Planet Mongo and Ming's reception hall - it's like Dorothy walking out into Munchkin Land. There is so much incredible production design and costume details on the screen you have to pause to appreciate it all. I already loved looking at this movie but now I was feeling like I was seeing so many details for the first time. 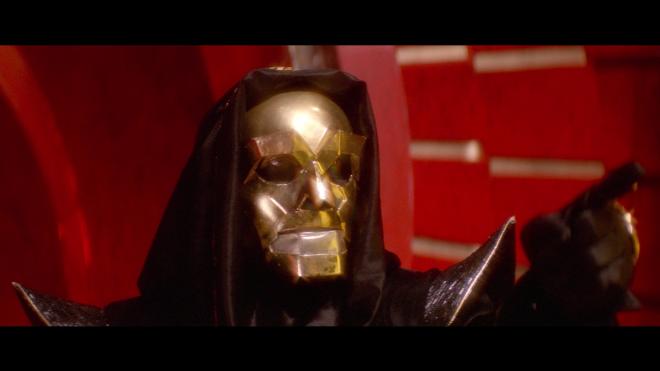 For this restoration, Mike Hodges worked with the team to dig back into the film and remove some of the wires holding up the space ship models and Vultan and the Hawkmen for the climactic attack sequence. Overall it's very clean and you can't really tell they removed them. A couple of sequences where they were initially "painted" out in 1980, the image still looks lighter than the rest of the scene but those are relatively brief moments.

Dolby Vision HDR does exactly what it should and add extra pop and highlights to the colors, brighten whites, and make blacks nice and inky. Again - the costumes! I'll refer back to Dale's wedding dress again because those black beads pick up a lot of spectral highlights as does the metallic armor of Ming's guards. Red and Green are major colors of the film and they come through with terrific pop as do blues - especially with one hapless character's blood early on smeared on a golden sword."

While I would have welcomed an Atmos audio mix, this rejiggered 5.1 DTS track and 2.0 DTS stereo mix are both excellent. Rolling my receiver's Neural X function for the 5.1 track was pretty damn intense offering a nice and atmospheric listening experience. However, if you're a bit of a traditionalist the 2.0 stereo track doesn't disappoint. It's dealer's choice. Worth noting though - the DTS-HD MA 2.0 track is the default so you have to change that in the menu or through your player's remote to get the DTS-HD MA 5.1 surround track.

From the Check Disc Review

"This 5.1 track sounds like it's been rejiggered a little to allow for a more distinctive surround presence with some object placement and a little more side/rear activity - but - it still feels like the front/center channels haul the main load. When the songs from Queen come on they appropriately dominate the mix making for a really exciting soundscape for the big Hawkman battle scene.

Just as welcome is the DTS-HD MA 2.0 stereo mix. While this film did get a 6-channel surround mix for some theatrical exhibitions, the one time I saw this in theaters it only had a stereo track, and that's always felt more natural to me than a full-on surround track. To that, it really is dealer's choice as I like both tracks here. I do lean towards the 5.1 mix because I love how the soundtrack fills all of the channels. It also really kicks if you add DTS Neural:X into the mix! Dialog is clean for both tracks and there aren't any unfortunate age-related issues to contend with."

Alrighty - there is a lot to pick through regardless which Flash Gordon set you pick up - however - I give the edge to Arrow Video for this one. There is just more genuine bonus features content here to pick through rather than a box full of stuff. I like swag, it can be fun to get the big box that doesn't fit anywhere on your shelf, but in this case, a nice neat box with booklet, poster, and lobby cards with an extra audio commentary track and a ton of other material is a better overall value in my opinion. The Life After Flash documentary alone makes this Limited Edition from Arrow a much more valuable purchase than the standard single-disc release. While I loved each commentary - that documentary was the cream of the crop. 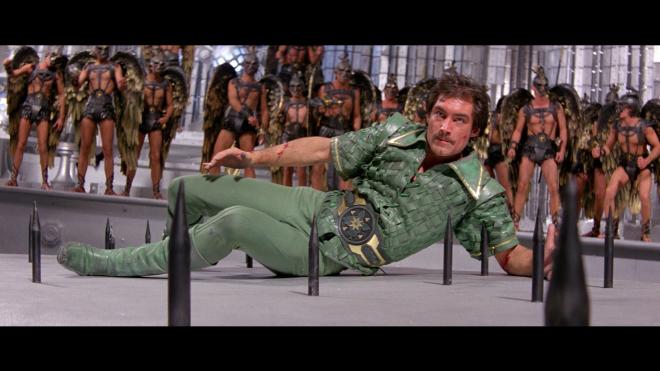 Alright, this should be it - the last of our Flash Gordon coverage from High-Def Digest. We didn't get a screener of Arrow's Blu-ray - but if the StudioCanal disc is an indication, it's excellent. If Universal Studios decides to do their own release in six months I think I might cry for a minute - but then gladly watch this movie all over again. As a favorite film from my childhood, I tend to only watch this one sporadically limiting myself to just a couple of viewings a year.

Thanks to StudioCanal and Arrow Video and the multitude of releases available I was "forced" to watch this movie many times over the course of a month - and didn't complain a minute. The Arrow Video Limited Edition offers fans a boon of a release. You get the same excellent A/V presentation as the StudioCanal release, a slick package with some decent swag items, but you also get a metric ton of bonus features - including an extra commentary and a few extra small featurettes not available on the StudioCanal release. Now having gone through both releases - I can stick my recommendation on Arrow Video's release over the U.K. StudioCanal edition. With the extra bonus features and commentary track - it has more going for it on disc and is less reliant on trinkets as a selling point. It's also significantly cheaper - so that's another positive selling point. Both editions are amazing and well worth adding to the collection.
Highly Recommended.