Celebrating its 40th anniversary in style - Mike Hodges' 1980 Flash Gordon saves the universe with a splendid new 4K Ultra HD transfer. As one of many Star Wars hangers-on hoping to cash in on big-budget space opera shenanigans, the film is a bit campy but a great cast playing full out with a killer soundtrack from Queen makes this a true 80s sci-fi classic. With Dolby Vision HDR, a stereo and surround audio track, and some worthwhile bonus features - StudioCanal delivers a great package for fans.

NOTE: This review details only the 4K disc from StudioCanal. High-Def Digest was only provided a manufacturer check disc to review - so we don't have packing nor do we have any additional discs containing the full bonus features package.

also - apologies for image quality. I hate taking pictures from my phone but without a restored Blu-ray to capture images from - this is the best I could do. 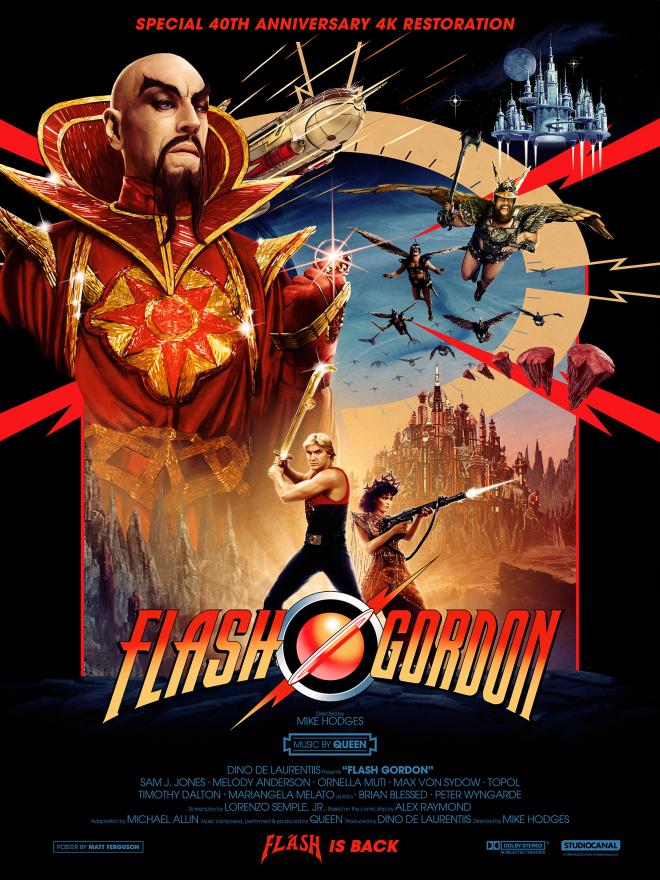 Mysterious anomalies are threatening the earth. Hot hail, earthquakes, tornadoes - on the day of an unexpected lunar eclipse Jets star quarterback Flash Gordon (Sam J. Jones) and the beautiful Dale Arden (Melody Anderson) are kidnapped by brilliant ex-NASA scientist Hans Zarkov (Topol) to fly into space and stop the attack on Earth. Sucked through a vortex in space they crash on Mongo - a distant planet of kingdoms held captive by the evil Emperor Ming (Max von Sydow). If they hope to survive, save the earth, and stop Ming, Flash must unite the warring kingdoms held by Prince Vultan (Brian Blessed) and Prince Barin (Timothy Dalton) and stage a final assault against Ming. 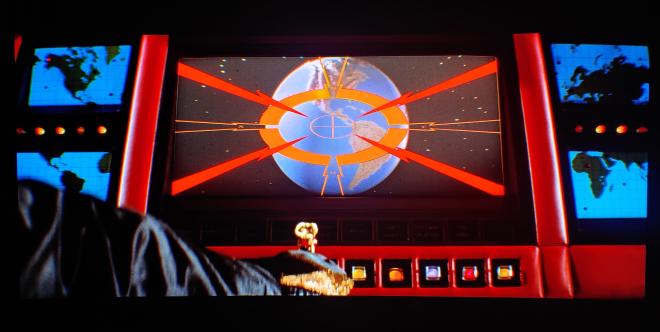 Yes, Flash Gordon is an 80s campy science fiction movie that tried damn hard to ape the intergalactic space-opera energy of Star Wars. For me, it's a classic piece of my childhood that is impenetrable from the ravages of nostalgic-aging. I've seen this movie hundreds of times in my 38 years and I never get tired of it. The action and adventure, the production design and costumes, the energetic and infectious soundtrack by Queen - I never get tired of it. Even after learning goofy things like Schwarzenegger was almost cast in this movie or that Nicholas Roeg had an interesting, thoughtfully thematic version that was scrapped for a lighter humorous take, my opinion of this movie is impervious to outside critique and influence.

After reading a variety of collections of the original 1930s comic strip and having picked through the old serials, I love how Mike Hodges captured the spirit for this film. He didn't try to update it, he didn't try to change what it was - he made this movie true to its origins. Considering the production where Hodges had to virtually make up how things were going to work on the day of shooting - it's a miracle this movie works at all. But through the chaos, an incredible amount of imagination and flair shows up in every scene. It may have been intended to be a rival to Star Wars but it looks nothing at all like Star Wars. The film aimed to capture the world of the comic strip and it succeeds.

Again, I have to admit to a crazy bias towards this movie as one of my absolute favorite movies growing up. I have fond memories of endlessly playing the soundtrack at my uncle's house in northern Michigan when I'd visit in the summer. From VHS to Blu-ray I've owned this movie on virtually every available video format and I'm pleased that it gets better with every advancement. This new 4K restoration was a revelation in a lot of ways. I felt like I was seeing some fine details I never saw before so it made me want to pick through every frame of this movie again and again. Watching it alone this morning, two more times for the commentary tracks, and then again to show my wife - I've picked through this movie four times practically in under two days and I'm ready to roll it up again. 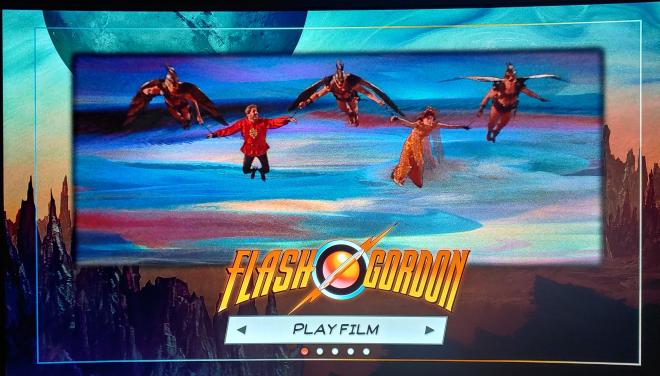 For this review, StudioCanal mailed me a manufacturer check disc so I didn't get any packaging nor did I get any of the extra bonus discs available in the various releases. This disc loads to a language menu and then to an animated main menu with traditional navigation options. I'm particularly entertained with this menu structure as it leans into the design and feel of the old comic strip origins of the movie. 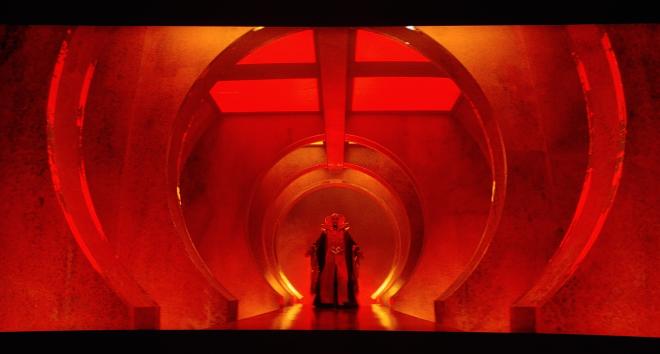 I've been importing StudioCanal's recent 4K releases like Prince of Darkness, They Live, and The Elephant Man and they have yet to disappoint. This is the case again with Flash Gordon in native 4K Ultra HD with Dolby Vision HDR (HDR10 is also available naturally). From the getgo details are exquisite. While I thought the 2012 Universal Blu-ray was alright, it was ankled by some ill-advised DNR that pulled out the natural film grain presence and deprived the image of essential details outside of facial closeups. I am very happy to report that no apparent DNR was employed here. Film grain retains a natural film-like quality allowing for a full range of details to survive in every frame. The film looked incredible when it was at a simple airstrip in the beginning or in Zarkov's laboratory - but man, when they get to Planet Mongo and Ming's reception hall - it's like Dorothy walking out into Munchkin Land. There is so much incredible production design and costume details on screen you have to pause to appreciate it all. I already loved looking at this movie but now I was feeling like I was seeing so many details for the first time.

Hell even at that landing strip you can clearly spot Robbie Coltrane as the airplane attendant! But man those costumes of the different cultures of Mongo - I really wish we'd gotten more time with them because they're so cool! Part of what makes these such visual splendors in 4K is the intense handcrafted quality of them. The beadwork in Ming's cloak is so intricate - but now also Dale's black wedding dress at the end is a real highlight for details.

This isn't to say this is a completely flawless transfer, there are a few lingering issues cooked in that only stand out a bit more. Softness in the initial photography is still there for some sequences. Harsh lines with the blue screen backgrounds are still rough around the edges. Harsh mat lines stand out even more for a few of the sequences but that's the worst of it. The image is free of any speckling or scratches.

For this restoration, Mike Hodges worked with the team to dig back into the film and remove some of the wires holding up the space ship models and Vultan and the Hawkmen for the climactic attack sequence. Overall it's very clean and you can't really tell they removed them. A couple of sequences where they were initially "painted" out in 1980, the image still looks lighter than the rest of the scene but those are relatively brief moments.

Dolby Vision HDR does exactly what it should and add extra pop and highlights to the colors, brighten whites, and make blacks nice and inky. Again - the costumes! I'll refer back to Dale's wedding dress again because those black beads pick up a lot of spectral highlights as does the metallic armor of Ming's guards. Red and Green are major colors of the film and they come through with terrific pop as do blues - especially with one hapless character's blood early on smeared on a golden sword.

All in all, I am extremely happy with this transfer. The last DVD and Blu-ray releases were alright, good enough for the time but also left you hoping for better the next time around. I honestly don't expect to see anything better than this any time soon. 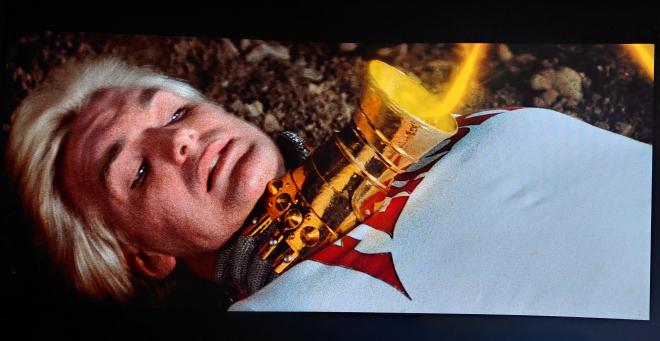 This new 4K release of Flash Gordon comes packed with a pair of solid audio mixes - DTS-HD MA 2.0 and DTS-HD MA 5.1. In the paperwork provided to me by StudioCanal with this check disc, it indicated that the audio mix was captured from the original elements. I wasn't displeased by the 2012 5.1 mix, it wasn't a very dynamic mix but it worked. This 5.1 track sounds like it's been rejiggered a little to allow for a more distinctive surround presence with some object placement and a little more side/rear activity - but - it still feels like the front/center channels haul the main load. When the songs from Queen come on they appropriately dominate the mix making for a really exciting soundscape for the big Hawkman battle scene.

Just as welcome is the DTS-HD MA 2.0 stereo mix. While this film did get a 6-channel surround mix for some theatrical exhibitions, the one time I saw this in theaters it only had a stereo track, and that's always felt more natural to me than a full-on surround track. To that, it really is dealer's choice as I like both tracks here. I do lean towards the 5.1 mix because I love how the soundtrack fills all of the channels. It also really kicks if you add DTS Neural:X into the mix! Dialog is clean for both tracks and there aren't any unfortunate age-related issues to contend with. 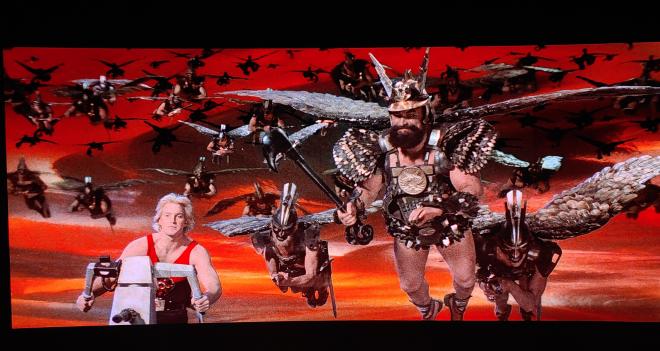 Depending on which release of this movie you go for, you're likely to get a slightly different assortment of bonus features. However, between the Arrow and StudioCanal releases, the bonus features found on this Check Disc look to be available for every release on the actual 4K disc. I had never heard the Mike Hodges or Brian Blessed commentary tracks and they're a treat. Hodges comes at the commentary from a production and technical angle and it's fascinating but Blessed is very entertaining because he's watching it like a fanboy in awe of every single thing on screen. The featurette about Nicolas Roeg's time on the film is also interesting to see how close his vision came to being a reality but also how his ideas and themes really weren't ideal for an adaptation of a 30s era comic strip. 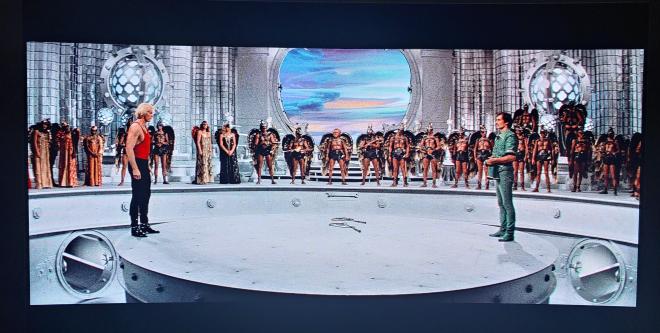 Flash Gordon is a favorite of mine. I was born just a couple years after its release and I quite literally grew up watching it. From VHS to DVD to Blu-ray to a digital copy - I've owned this movie on virtually every format and I watch it at least 5 or 6 times a year. Well for this 4K check disc I've watched Flash Gordon nearly that many times in less than 48 hours! I just kept having to watch it! The new video restoration is fantastic. It may not overcome some of the cooked in issues of the photography or effects work, but it's a vast improvement over the previous 2012 Blu-ray release. Gone is any sign of DNR or edge enhancement and Dolby Vision HDR does what it should by giving colors, whites, and black levels extra punch. You get two audio mixes to choose from as well as a bonus feature package complete with two-excellent and informative audio commentaries. I can't wait to get my hands on a final version of this - I'm importing the Zavvi SteelBook and I'm also grabbing the deluxe edition from Arrow so I'll be giving a full report later on. But for now, I feel it's safe to call this Highly Recommended - especially if you're a fan eager for an upgrade!