Requiem For A Dream injects its way to a 20th Anniversary 4K UHD + Blu-ray + Digital Copy with a director's cut of the film. Darren Aronofsky's adaptation focuses on four people, all with extreme addictions to drugs that send their lives spiraling out of control. It's excellent in every way, even if its one of the most difficult films to watch subject matter-wise. The brand new 4K transfer with Dolby Vision is superb and the Dolby Atmos track is delivered on a grande scale. The hour of all-new bonus features is all informative, fun, and worth the time. MUST-OWN! 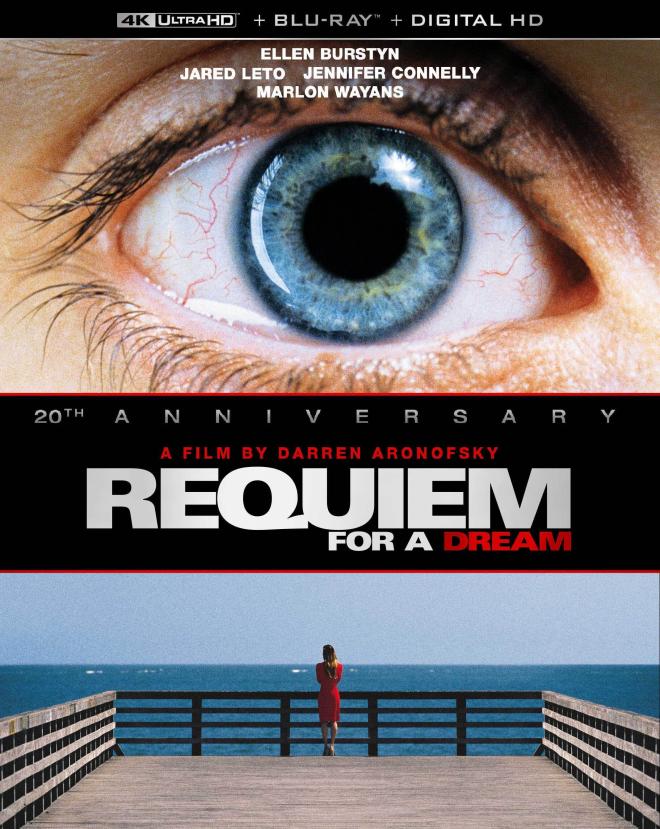 Darren Aronofsky has become a household name with movies like The Wrestler, Black Swan, and Noah, but before those three successful films were released, he directed a couple of indie films that were as polarizing as they were brilliant with Pi and Requiem For A Dream. The former was about a man who struggled with a famous math equation that led to a gruesome self-surgery. The latter also came with an intense struggle, but instead of mathematical formulas, it was for addiction. The results of Requiem For A Dream showcased a fierce and harsh look down the rabbit hole of drug addiction and how it can affect different people in a way that had never been shown before on the big screen.

Based on the 1978 novel of the same name by Hubert Selby Jr., Requiem For A Dream follows the lives of four characters over the course of several months and their drastic downward spiral into a hellish nightmare of drug addiction. Harry (Jared Leto), Marion (Jennifer Connelly), and Tyrone (Marlon Wayans) are all three friends who have a penchant for heroin. Tyrone and Harry, along with Harry's girlfriend Marion are not above stealing Harry's mom's television and selling it for a quick twenty dollars for a fast fix. They are pleasant people, but their drug of choice constantly calls out to them. One day, the trio of friends hope to sell one big score of heroin so they can live on easy street for the rest of their lives. When that day arrives, they dip into their own stash, sending them through a series of painful, frightening, and sadistic actions of violence, betrayal, and sex.

Meanwhile, Harry's mother Sara (Ellen Burstyn) is obsessed with a game show and is called from a casting company to be a contestant on her favorite series, but has gained a few pounds. She quickly becomes addicted to diet pills in order to fit into her red dress from her younger days and be slim for the show. Like heroin, these diet pills send Sara on an explosive and hellacious venture of misery and hallucinations. This all culminates in some of the worst-case scenarios for a drug-addicted person - all set to the haunting tune of Lux Aeterna by Clint Mansell.

Aronofsky created this horrific world of addiction with many elements at hand. One being the use of his camera where at times looks like a normal wide shot narrative, where at other times, there's a sense of claustrophobia where the camera is attached to the actor's chest, where there is no escape from their sweat, blood, or vomit on the camera. It's erratic, turbulent, and difficult to watch, which only heightens the performances and story at hand. Nothing here is pretty or vibrant. Another aspect Aronofsky utilizes perfectly is when he reveals the pure bliss, happiness, and state of utopia that these characters experience when high. All is peaceful and serene and full of smiles - much like a very realistic feeling when taking certain drugs. The result is the complete and utter destruction of life in order to only focus on securing the next score for drugs at any cost.

Requiem For A Dream is one of those rare poetic films that are extremely hard to view, but much like a drug, it's addicting for its unique visual style, remarkable performances, and harrowing subject matter. For a film like Half Baked that hilariously celebrates marijuana use, after viewing Requiem For A Dream, it makes you think twice before taking any sort of drug. It's one of cinema's greatest achievements.

Requiem For A Dream scores its way onto 4K UHD + Blu-ray + Digital Copy from Lionsgate with its 20th Anniversary Director's Cut. The discs are housed in a hard, black, eco-friendly case with a cardboard sleeve with somewhat new artwork for the film, featuring the glazed eyeball, and serene image of Marion in a red dress overlooking the ocean. There is an insert for the digital code inside as well. 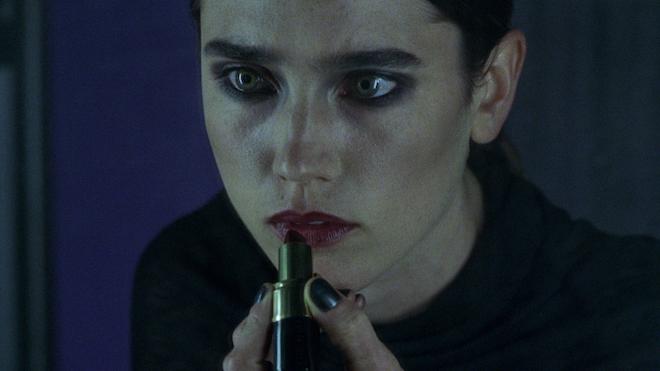 Requiem For A Dream scores its 20th-anniversary Director's Cut with a new 4K transfer with HDR and Doby Vision, breathing new life into this amazing film some two decades later.

This is a heavy-stylized movie with a ton of camera tricks, different types of angles, and color palettes to convey the drug-induced hell these characters live in. During the happier sequences where the characters are high and jovial, the colors are brighter and well lit with decent primary colors. Sara's red dress and the trio of friend's colorful clothes. A lot of the sots are on the exterior around Coney Island and New York, which gives way to the pretty blue coastline, green trees, and many shades of brown and silver buildings around. During these sequences, there's also a fantasy-like glow and halo that illuminates the screen as if to say this is a fairy tale.

The Dolby Vision and HDR truly enhance these nuanced primary colors perfectly in every lighting condition. Now the opposite color palette is more or less the norm for most of the film, which is dark, gloomy, and decayed with black, grey, silver, and faded blues and greens that dominate the color field. Thes sequences tend to have more detail because it is rawer and without that fantasy-like glow, which delivers a more visceral and detailed palette where every corrosive vein bulges out in a grotesque way. These intimate details of beads of sweat, blood splatters, and even the infamous infect arm all showcase the gruesome practical effects of a limb dying.

Other close-ups divulge the individual straggly hairs on Sara's head and the fine stitching in Marion's wardrobe. Black levels are a bit deeper and darker here without any murky areas or crush. Skin tones are natural as well. Lastly, there are no issues with any banding, aliasing, or video noise here, but rather a great layer of grain that varies in a stylistic way when these characters go down their drug-fueled path. 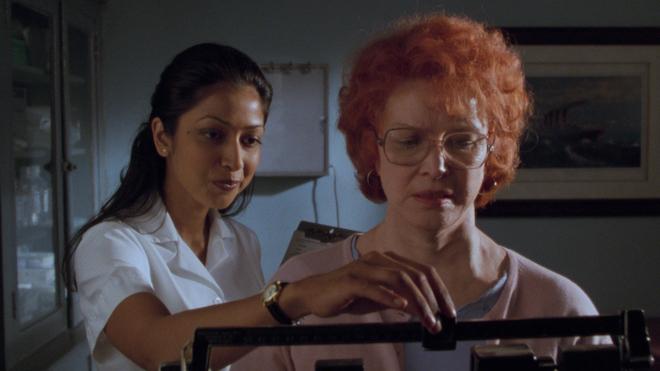 A brand new Dolby Atmos track is available on Requiem For A Dream and it's a stylized delight of sound and music. This film was made for Dolby Atmos and doesn't disappoint. As much as the visual elements enhance the viewing experience, fully immersing its audience into this chaotic world, the audio, sound effects, and musical cues add to the element in a big way. Sound effects are overly loud and robust with excellent directionality. The banging of the doors and walls, along with the monstrous sound of the possessed refrigerator is quite frightening.

Other sequences of sound are muted when the cast is high on drugs to simulate their state of euphoria. It mixes well with the harshness of the quick cuts of drugs being injected and loud city noises in a perfect ballet of sound. The height speakers bring in all of these noises as well, especially from the game show audience on television from time to time. The Lux Aternea theme song is consistent with the film with the added drum beats that create a sense of dread and repetitiveness to the character's drug habits. It's a brilliant way to utilize the soundtrack. The dialogue is always clean and easy to follow and free of any audio issues. 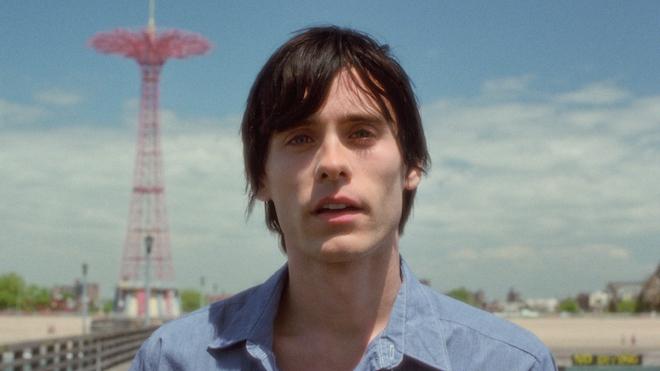 The 20th Anniversary of Requiem For A Dream comes with several brand new bonus features that run around 55 minutes in length. Included are new interviews with some of the cast and composer for the film, a look back with a film historian, and a little glimpse of on-set footage and interviews from over 20 years ago. Additionally, the previous two commentary tracks are imported here all on the 4K UHD Disc. 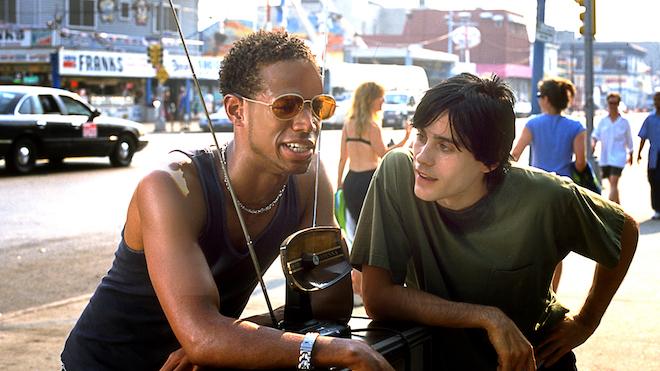 Requiem For A Dream still packs a powerful, stinging gut-punch some twenty years later with its fresh camera techniques, phenomenal score, and haunting imagery, not to mention the incredible performances by all involved. There's nothing quite like this movie still to this day and its message about any kind of addiction. This new 20th Anniversary 4K UHD release has an amazing new transfer with Dolby Vision and a fantastic new Dolby Atmos audio mix. The brand new bonus features are all worthwhile as well. MUST-OWN!