Celebrating 45 years of terrifying audiences, Steven Spielberg's Jaws remains one of the most effective horror thrillers ever made with memorable performances by Roy Scheider, Richard Dreyfuss and Robert Shaw. The classic creature-feature swims the shores of 4K Ultra HD with a handsome Dolby Vision HDR video, an excellent Dolby Atmos track but the same set of supplements from previous releases. Nevertheless, this 4K limited edition with a 48-page booklet makes for a Highly Recommended addition to the UHD library.

Steven Spielberg's Jaws celebrates forty-five years of cinematic history, a horror-thriller displaying skill, polish and efficiency from a then young, up-and-coming filmmaker. And to this day, it remains one of the greatest, most effective suspense films ever made, delivering the sort of terrifying, visceral punch we expect from movies but rarely attain. Adapted from Peter Benchley's novel, the incredibly simple plot about hunting a man-eating, great white shark terrorizing a small beach-town resort is, at its heart, a low-budget B-movie, a creature-feature of the Exploitation variety. Amazingly, Spielberg took a schlock-quality concept and brought it to the level of mainstream acceptability, turning it into a box-office smash and opening doors for movies like George Lucas' Star Wars and Ridley Scott's Alien.

Of course, the film overcomes much of the plot's B-level sentimentality by populating it with a great assortment of characters portrayed by an excellent cast of actors. Without a doubt, the most memorable is Robert Shaw as the experienced shark hunter Quint, a man with such a cold, hard exterior it's surprising Shaw makes him as lovable and heroic as he does. Richard Dreyfuss brings a winsome, affable personality to the privileged scientist, a conventional persona of B-genre he makes his own. And Roy Scheider's police chief Brody is just as unforgettable, a city outsider forced to confront his fear of water. One of the more remarkable scenes — and there are quite a few in this horror classic — is the drunk chat between the three men after Quint's U.S.S. Indianapolis speech, just before the shark attacks their boat.

On a cinematic scale, Spielberg's film is a defining moment in the history of motion pictures, unexpectedly inaugurating the summer blockbuster approach to filmmaking which obviously continues today. It has forever changed how studios produce and promote movies, with preference and priority to high-concept premises with wide commercial appeal, eventually inviting the attention of major corporations to enter the moviemaking business. The film demonstrates Spielberg's talent for capturing thrilling action and generating suspense from the most simplistic camera angles and balancing it with poignant, touching drama. Along with appreciating Bill Butler's cinematography and John Williams's minimalist score, Verna Fields' editing is another of the production's most remarkable aspects, as her work is largely responsible for making Jaws a genuine masterpiece of suspense and terror. 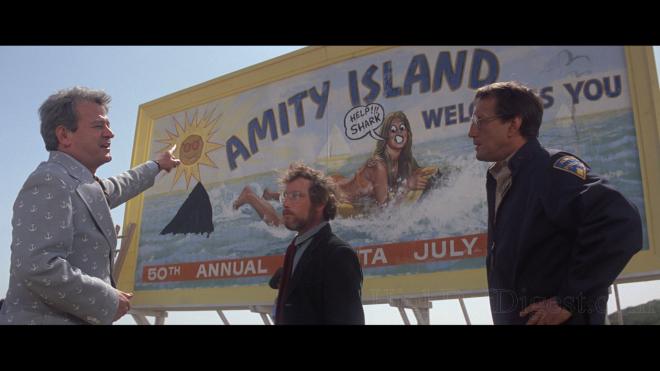 For a more in-depth take on the movie, you can read our review of the 2012 Blu-ray HERE.

Universal Studios Home Entertainment brings Steven Spielberg's Jaws to 4K Ultra HD as a two-disc combo pack dubbed the "45th Anniversary Limited Edition." A triple-layered UHD100 disc sits comfortably opposite a Region Free, BD50 disc inside a black, eco-elite case, which includes a Digital Copy code that, as of this writing, only unlocks the HD SDR version with legacy Dolby Digital audio. The package comes inside a sturdy side-sliding box with lenticular artwork on the front and a 48-page color booklet featuring an essay, information on the production, cast & crew bios and various other factoids. At startup, viewers go straight to a static menu screen with music playing and interactive options along the right side.

Coming from the same restoration efforts done a few years ago, the original 35mm camera negatives have been remastered to a brand-new 4K digital intermediate, and the results are nothing short of marvelous. Naturally, the native 4K transfer still shows a few age-related issues, like a couple soft scenes here and there, but on the whole, the 2160p picture displays sharper, more distinct definition in the hair and clothing of the cast, revealing the tiny wrinkles and pores in the faces of actors. We can plainly make out the smallest detail and object in Quint's boat, from the scratches and imperfections on the wood to the bottles and fishing tools hanging along the walls.

Contrast and brightness enjoy a generous boost, making the daylight exteriors really pop with stunningly intense whites in the clouds while blacks are richer and inkier. Meanwhile, specular highlights add a dazzling shimmer in the water, a glistening polish along metallic surfaces and a slimier glow to Bruce the Shark. Shadow delineation in the various gradations is excellent, exposing small background objects hiding within the darkest corners, and with a thinly-layered grain structure throughout, the 2.35:1 image comes with a lovely film-like quality.

Likewise, Bill Butler's cinematography benefits from a bolder, livelier color palette, making the entire film appear fresh and rejuvenated. Primaries are more sumptuous and eye-catching in this Dolby Vision HDR presentation, and this is especially true of the red swimming trunks and boats looking more dramatic and animated while the cerulean blue of the sky is more spirited and striking. Better still is the improvement in the secondary hues delivering stronger, more realistic skin tones, particularly the severely tanned Mrs. Taft looking browner while others show rosier, peachier complexions. (Dolby Vision Video Rating: 94/100)

The creature-feature masterpiece has also been upgraded to an excellent Dolby Atmos soundtrack, sure to make fans very happy. It doesn't quite compete with some of the best we've heard from the format or offer a massive jump over its DTS-HD MA predecessor, but it is nonetheless highly enjoyable and satisfying, providing several noteworthy enhancements. The surrounds are often employed with various discrete atmospherics of the beach, ocean and the chatter of tourists flooding Amity. Occasionally, seagulls can be heard randomly flying or screeching overhead, but such are very far and few in between.

The real win in this object-based track is John Williams's score bleeding fluidly into all the channels, beautifully enveloping the listening area and delivering a wonderfully immersive aural experience. Maintaining a very much front-heavy presentation, the iconic motif spreads across the top heights to create an awesome half-dome wall of sound while also exhibiting clean differentiation between the few instruments used in his orchestration. Dynamic range is sharply rendered and detailed, nicely separating the mids from the highs with extraordinary clarity. Just as in the lossless mix, channel separation is well-balanced, delivering many off-screen effects with smooth panning and generating a terrifically warm and convincing image while dialogue reproduction is precise and intelligible with superb emotive intonation. The low-end isn't particularly powerful, but it can be quite potent at times and thrillingly effective nonetheless. (Dolby Atmos Audio Rating: 88/100)

Aside from the new booklet, the same set of supplements are ported over for this limited edition and shared between both the UHD disc and the accompanying Blu-ray.

Starring Roy Scheider, Richard Dreyfuss, and Robert Shaw, Jaws is the film which has left a permanent mark on the history of cinema, remaining one of the most effective horror thrillers ever made, it changed the motion picture industry forever. The simple, high-concept premise of a man-eating shark terrorizing a small beach resort community not only transformed Steven Spielberg into a household name, but also introduced the special effects, blockbuster extravaganza which has become the staple of the summer movie season. Spielberg's classic creature-feature swims the shores of 4K Ultra HD with a spectacularly handsome Dolby Vision HDR video presentation and an excellent Dolby Atmos soundtrack, providing a notable upgrade over its Blu-ray counterpart that will more than satisfy movie lovers everywhere. The same set of supplements from previous releases are ported over, but this 4K limited edition nonetheless makes for a highly recommended addition to the UHD library.