Starring Anna Kendrick, Justin Timberlake and Rachel Bloom, Trolls World Tour is a surprisingly entertaining follow-up with a heartfelt message about the unifying power of music. The sequel takes the 4K Ultra HD stage with a reference-quality Dolby Vision HDR presentation, a sensational, hard-rocking Dolby Atmos track and a small but nonetheless good set of bonuses. The overall UHD package is Highly Recommended for the whole family.

Writhing beneath all the saccharine-felt sweetness, the overly-chummy affections, the warm fuzzy hugs and the contagious upbeat pop tunes, the trolls of Trolls World Tour are hiding a disturbingly dark secret. It's an earth-shattering revelation to crush a character's perception of their reality, the sort that exposes a believed utopia to actually be a dystopia. Okay, so maybe the CG-animated sequel to the 2016 surprise hit doesn't really go that pessimistic and bleak. But for a jukebox musical comedy targeted at children, the plot definitely tiptoes around some rather somberly pressing ideas that essentially amount to confronting the sins of the past and making a deliberate effort to rectify those wrongs. And given the current sociopolitical turmoil of late, the central theme unironically feels all the more pertinent for younger audiences.

Since the events of the previous movie, the trolls have been living in literal harmony, bursting into bouncy, highly-energetic song and dance performances that are seemingly spontaneous and instinctive yet perfectly choreographed. Under the reign of excessively adorable and ridiculously optimistic Queen Poppy (Anna Kendrick), maintaining this sense of harmony is of the utmost importance — her one and only ambition as the leader of the colorfully melodious critters. So much so that she's blind to anything that could potentially threaten her idyllic, euphonious way of life — or more like, she cheerfully chooses to disregard the plausibility. Gotta love the filmmakers cleverly showing Poppy's untroubled obliviousness when failing to match the rhythm and timing of a high-five with survivalist Branch (Justin Timberlake), a supporting character now upgraded to introducing a love-interest subplot. 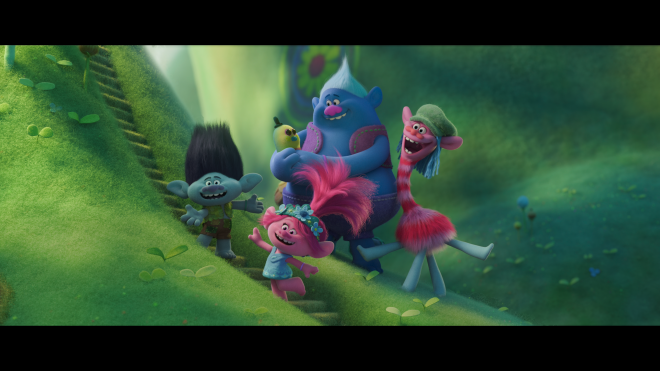 The secret about to rock the foundation of Poppy's reality, however, comes by way of learning the world is much larger than her little social bubble — that there exist other tribes of trolls who celebrate music vastly different than her own, represented by five musical strings. One of those genre-specific tribes is the Hard Rock Trolls, led by Queen Barb (Rachel Bloom) who is hellbent on reuniting but also dominating the troll universe under her favored genre of music. In the highly-talented hands of Bloom, Barb immediately commands the screen from the moment she makes her appearance in her piranha-like spaceships, which float in the air from one troll land to the next in Mad Max: Fury Road style. And she's more than a single-minded, red-Mohawked villain, revealing some insecurities lurking beneath her sassy, tough exterior while imparting a sense of loneliness and desiring to impress her dad (Ozzy Osbourne).

Of course, much of this goes right over Poppy's head, especially when it comes to seeing Barb as a threat or listening to another's point of view. And this is where Trolls World Tour suddenly matures in surprisingly interesting ways and shows to be wiser than assumed for a sequel. Poppy is not much different than Barb, believing her genre of music to be the ultimate unifier while also judgmental of Delta Dawn's (Kelly Clarkson) country vibes. It's a rather clever and ingenious way for our hot-pink heroine slowly understanding her perspective of the much-bigger world is fairly naive and narrow-minded, failing to appreciate her view of the differences in others comes from a confined, limited bubble. And it's pretty funkadelic that George Clinton, Mary J. Blige and Anderson Paak show her and the audience differences should be celebrated, making this animated follow-up much better than expected.

Universal Studios Home Entertainment brings Trolls World Tour to 4K Ultra HD Blu-ray as a two-disc combo pack dubbed "Dance Party Edition" and includes a Digital Copy code. When redeeming said code via Movies Anywhere, users have access to the 4K Dolby Vision version with Dolby Atmos audio. The triple-layered UHD100 disc sits comfortably opposite a Region Free, BD50 disc inside a black, eco-elite case with a glossy slipcover. At startup, the disc goes straight to a static screen with the usual options along the bottom, music playing in the background and quick access to special features along the left side of the screen.

Trolls pledge to unite the world under Ultra HD with a head-bangingly awesome and totally outstanding HEVC H.265 encode, showcasing noticeably sharper definition than its Blu-ray bandmate. Likely coming from a 2K digital source, the freshly-minted 4K transfer enjoys better clarity of the smaller objects in the far distance. The increased contrast exposes more detailing in the tiniest, out-of-place hairs and textural fibers in the felt CG-design of characters while also showering the action in extraordinarily vivid and pitch-perfect whites. Specular highlights are likewise popping with a more radiant, gleaming glow throughout, revealing a bit more in the fluffy cotton clouds, supplying the glitter with a narrower, crisper sparkle, and furnishing each song performance with a resplendent brilliance in the lights and lasers.

The 2160p picture is balanced with strikingly lush, inkier black levels, adding another layer of mesmerizing, eye-catching beauty in the animation and every time characters break out into a song and dance number. The velvety, stygian shadows maintain excellent visibility within the darkest, blackest corners, providing the 2.39:1 image with stunning three-dimensional depth. Better still, the ultimate power chord is further amplified by the amazing Dolby Vision HDR bathing every scene in a sumptuous and extravagant array of secondary hues. Every song and performance is oozing with energetic fuschias and soft magentas, flamboyant violets and dynamic teals, fiery tiger oranges and golden buttery yellows. Meanwhile, primaries are certainly richer and fuller, especially reds ranging from dark ruby garnets to vibrant candy roses, making for a spectacularly gorgeous feast for the eyes. (Dolby Vision Video Rating: 96/100)

It is worth noting that this UHD edition of Trolls World Tour also features the HDR10+ video format. However, as of this writing, we are not yet equipped to evaluate the quality of the said format.

The CG-animated sequel storms the home theater stage with a hard-rocking and sensational Dolby Atmos soundtrack. For a wacky fantasy feature of this caliber, the track isn't as aggressive or bold as would be expected. For a majority of the runtime, the surrounds are rarely or sporadically employed, leaving several chunks of action feeling somewhat lacking and quieter than anticipated while making the overall movie a very front-heavy presentation. Granted, there are a few atmospherics here and there that mildly travel into the sides and even more subtly into the overheads, but it's not enough to generate a convincing or immersive soundfield.

The design's true strength and genuine rockness is an incredibly broad and expansive soundstage displaying excellent balance and accuracy. The visuals are continuously layered with lots of background activity smoothly panning between the three channels and lightly into the top heights. The action is also terrifically complemented by a splendid and dynamic midrange, exhibiting superb definition during the loudest segments while supplying each song and performance with exceptional warmth and distinction. The low-end could arguably be stronger and a bit more demanding, but it's adequate to deliver a precise punch and weight to the music. With crystal-clear and well-prioritized vocals throughout, the object-based mix fills the room with an awesome and highly-satisfying listen. (Dolby Atmos Audio Rating: 86/100)

For this UHD edition, bonuses are available on the accompanying Blu-ray disc.

The trolls are back for more infectious song & dance performances, silly shenanigans and a heartfelt message about the unifying power of music in Trolls World Tour. Starring Anna Kendrick, Justin Timberlake and Rachel Bloom, the CG-animated follow-up is surprisingly entertaining, exploring some unexpectedly mature themes for young audiences to ponder. The sequel takes the 4K Ultra HD stage with an exceptional, reference-quality Dolby Vision HDR presentation, offering a notable improvement over the Blu-ray while enjoying the same sensational, hard-rocking Dolby Atmos soundtrack. With a small but nonetheless good set of supplements, the overall UHD package is highly recommended for the whole family.