From the creators of Shrek comes the most smart, funny, irreverent animated comedy of the year, DreamWorks' Trolls. This holiday season, enter a colorful, wondrous world populated by hilariously unforgettable characters and discover the story of the overly optimistic Trolls, with a constant song on their lips, and the comically pessimistic Bergens, who are only happy when they have trolls in their stomach. Featuring original music from Justin Timberlake, and soon-to-be classic mash-ups of songs from other popular artists, the film stars the voice talents of Anna Kendrick, Justin Timberlake, Russell Brand, James Corden, Kunal Nayyar, Ron Funches, Icona Pop, Gwen Stefani, and many more. DreamWorks' TROLLS is a fresh, broad comedy filled with music, heart and hair-raising adventures. In November of 2016, nothing can prepare you for our new Troll world.

In spite of hitting the silver screen twenty years too late, 'Trolls,' the animated adaptation of a toy line that hasn't been popular since the mid-1990s, delivers an unexpectedly enjoyable and infectiously funny comedy adventure. Against all odds — because let's admit, this should not have been as good as it is — Erica Rivinoja's ('South Park' series, 'Cloudy with a Chance of Meatballs 2') story is sure to brighten even the grumpiest sourpuss in the audience. It delights with a surprisingly mature and relatable plot following the overly jubilant, sickeningly optimistic Princess Poppy (Anna Kendrick), princess of the trolls who fails to appreciate the safety and security her kingdom has enjoyed for the last twenty years. With a little help from Kendrick, however, the buoyantly enthusiastic, pink-haired mythical creature is a likeable ball of sunshine who lives up to her name, spreading her endless supply of cheer by breaking into a perfectly choreographed song and dance routine, even when under fatal threat by various forest beasts.

Of course, as any good hero's journey tale should be, Poppy learns a hard lesson when faced with the consequences of her actions — being an optimistic go-getter about life's challenges isn't the only means for overcoming them. Justin Timberlake joins the fray as a cross between ally and mentor, except not a very supportive one with a short-fuse temper. The joke here must be that the singer-turned-actor seems like the poster boy for exuding confidence and positivity in real life. Disregarding the warnings of the gray, crotchety Branch (Timberlake) as the paranoid delusions of an excessively cautious survivalist, Poppy readies her kingdom to celebrate the anniversary of their escape from the hungry clutches of the ogre-like Bergens by throwing the loudest, most extravagant, rambunctious party ever. As expected, the jubilee, which includes a fireworks display, draws the attention of a particularly nasty Bergen known only a Chef (Christine Baranski wickedly chewing on every line with voracious delight). 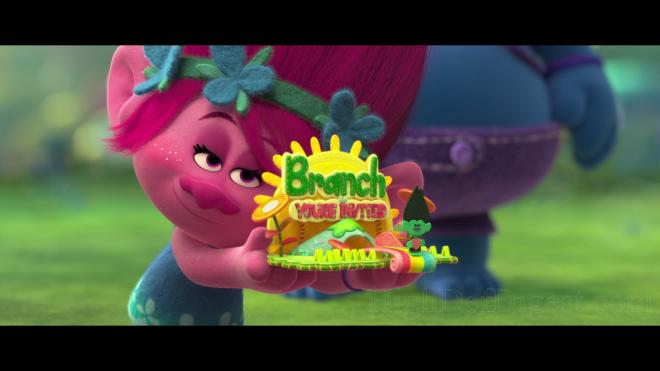 With the two setting out to rescue Poppy's kidnapped friends from being the main dinner course, the story takes a familiar odd-couple road towards a predictable conclusion. Some of Poppy's can-do assuredness will inevitably rub off on Branch's glum pessimism, and it does in a somewhat disappointingly foreseeable fashion. But the story also does so with a minor twist as a tidy bit of Branch's cynicism and sarcasm leaves a mark on Poppy. Then again, coming close to being eaten and realizing you are the reason for it to begin with can have its toll on even the most absurdly happy-go-luck amongst us. It's admirable to see a children's animated feature showing that maintaining an optimistic outlook during life's most punishing obstacles is a boon, being cautious and wary of unknown dangers comes with its share of blessings as well. While the little tykes lull themselves into a daze, hypnotized by a smorgasbord of garishly loud colors and various pop-tunes, parents can take comfort that the movie is more than just pretty visuals.

In 'Trolls,' directors Mike Mitchell and Walt Dohrn retain interests with a subplot that touches on the plot's true central theme. Since the two unlikely friends with hair that can grow to unspecified lengths at command can't complete their rescue mission alone, they recruit the help of an especially unhappy, self-deprecating Bergen named Bridget (Zooey Deschanel), a scullery maid secretly in love with Prince Gristle (Christopher Mintz-Plasse). Their startlingly cute love affair opens doors for some fairy tale allusions that successfully adds to the film's overall charm. More importantly, it plants the notion of happiness as an internal attribute that can be suppressed or denied rather than being achieved by material possessions or food. Cliché as it may be, one that adults might feel as though being hammered by the filmmakers, it's a concept that bears repeating for kids growing in a world that doesn't appear to be living by that philosophy. A film inspired by the toy franchise was a long time coming, but it's nice to see the wait was worth it.

20th Century Fox Home Entertainment brings 'Trolls' to Ultra HD Blu-ray as a two-disc combo pack with a flyer for a Digital HD Copy. At the moment, we are unable to verify if the correct size of the content, but the dual-layered UHD66 disc sits comfortably opposite a Region Free, BD50 disc inside a black, eco-cutout case with a glossy slipcover.

The package also includes promo codes for a mobile app and an online game for kids. Another flyer detailing the Blu-ray's "party mode" explains that when the feature is turned on, viewers can join in a sing-a-long, repeat specific phrases during "Troll Talk" and wait to be prompted for "Hug Time." The feature also includes red, green, yellow and blue button prompts for even more interactive fun.

At startup, the UHD goes straight to a main menu screen with full-motion clips and music.

Bursting with glittering, jubilant delights and a feast for the eyes, the CG animated film charges Ultra HD Blu-ray with a gorgeous reference-quality HEVC H.265 encode in HDR10.

Presented in its original 2.35:1 aspect ratio, the freshly-minted digital transfer is stunning and jaw-dropping from start to finish with razor-sharp lines and clarity in every frame. Viewers can cleanly make out individual nodules and deliberate blemishes in the cloth-like faces of the Bergens, as opposed to the smoother, lighter and more refined whiskers of the trolls. Whether in extreme wide shots or close-ups, the most trivial detail, tiny nuance or particularity in the background is as sharply-defined as any object in the foreground. Every hair and fiber in the felt fabric, done as part of the story's scrapbook style, is extraordinarily distinct with lifelike textures, giving the visuals a stunningly beautiful three-dimensional feel. Each strand of hair and filament making up the fluffy clouds and other sock-puppet creatures is an impressive aspect of the CG photography that adds to the film's amazing realism.

From the opening moments, the 4K presentation is a dazzling, hypnotizing feast for the eyes, full of vibrant colors that immediately set the tale with a sprightly, high-spirited tone that amazingly never lets down. Sumptuously garish and flashy primaries illuminate the screen with extravagant brilliance and energy. From the intense reds in flowers and the vivid greens of the surrounding foliage to the electrifying blues of the sky and explosions, the photography creates a bouncy, happily-go-luck feel that infectious.

Much of the palette, however, places more emphasis on a gorgeous sundry of secondary hues, which are continuously brimming with a boldness that further add to the plot's upbeat humor and gives each character a life of their own. Every scene comes alive with richly-saturated pastels and flamboyant neons, which remain strong even when certain moments seem dour or gloomy. Some of the most impressive moments are where we can plainly differentiate between blues, purples, violets and magentas during the fireworks show, the lighting in disco parties and in a few sunset views.

Adding to the film's optimistically cheerful feel, contrast is right on the money and pitch-perfect from beginning to end, allowing for remarkable visibility of the most minute feature and facet. Whites are radiant and ecstatic with brilliant luminosity, giving the fluffy clouds a true to life splendor, while brilliant specular highlights provide a realistic glow and sparkle to the metal cages, pipes and the various instances where silver glitter is thrown at the screen. Lavishing the rest of the frame, black levels are luxurious and inky-rich with spotless gradations between the lighter and darker portions, adding an astonishing verisimilitude to the three-dimensional image while maintaining distinct clarity of shadows details.

In a surprise twist, the Dolby Atmos accompanying the rambunctious visuals dazzles more effectively than its DTS-HD MA counterpart heard on the Blu-ray.

Filled with flamboyantly rowdy and exuberant musical numbers, the animated film largely remains a front-heavy design, which is sure to delight young viewers. Exhibiting superb detailing and fidelity in the mid-range, a variety of ambient effects spread across all three channels with excellent balance and extend into the front heights on numerous occasions. Each song and dance erupts with outstanding room-penetrating clarity between each instrument and note while subtly bleeding into the sides and ceiling speakers, creating a highly engaging half-dome wall of sound. Even during the loudest sequences, vocals remain distinct and precise, and a robust, potent low-end delivers a palpable, wall-rattling oomph to the song selections, digging below 20Hz on a few occasions (bass chart).

More surprising is that the rears are employed more often here for the action sequences than before. The loudest, most rambunctious moments come with specific noises that discretely and flawlessly pan from the front of the room to the sides or overhead. And this is the case, especially, when characters are seen flying through the air. The parties are crammed with the boisterous commotion of the cheering, screaming crowd while echoes of the music fill the space above the listening area. Quieter scenes apply some light, subtle atmospherics for expanding the soundfield with satisfying effectiveness.

For a majority of the runtime, the object-based mix still comes with large pockets of silence, but with more activity all around for a more immersive experience, Atmos beats the DTS-HD track.

In spite of hitting the silver screen twenty years too late, 'Trolls,' the animated adaptation of a toy line that hasn't been popular since the mid-1990s, delivers an unexpectedly enjoyable and infectiously funny comedy adventure. Starring Anna Kendrick, Justin Timberlake, Zooey Deschanel, Christopher Mintz-Plasse and Christine Baranski, the CG animated film is a delightful journey through seeing the brighter side of things, sure to brighten even the grumpiest sourpuss in the audience.

The Ultra HD Blu-ray arrives with a beautiful reference-quality 4k video and an excellent Dolby Atmos presentation that's better than the DTS-HD soundtrack, making this UHD version the best way to watch and enjoy the animated family film. Although the supplements are disappointingly light, the UHD package is recommended for early adopters and the curious.

Sale Price 16.6
List Price 29.98
Buy Now
3rd Party 2.48
In Stock.
See what people are saying about this story or others
See Comments in Forum
Previous Next
Pre-Orders
Tomorrow's latest releases