William Lustig and Joe Spinell's iconic 80s gore-fueled shocker Maniac gets a 4K Ultra HD with Dolby Vision HDR upgrade that looks better than ever - while also keeping that sweaty, grimy vibe. The late great Spinell runs this show through and through with a delightfully creepy performance that inevitably leads to incredible gore effects from master Tom Savini. Certainly not a show for everyone, but if you like a visceral dirty horror experience, it doesn't get much better than Maniac - Highly Recommended.

Frank (Joe Spinell) has issues. Tortured by the abuse he endured at the hands of his mother as a child, Frank stalks New York, murdering women and extracting their scalps for his collection. As his collection grows - he meets the beautiful photographer Anna (Caroline Munro) and starts an unlikely relationship with the woman. Is she the chance Frank needs to change his ways and stop murdering women - or will she be just another victim for his collection? 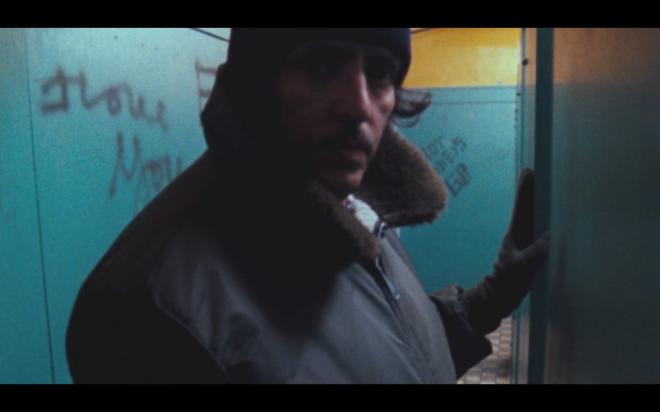 I had a two-fold introduction to Maniac. When I was about 12 years old I went to my first comic book convention in Detroit. Among the media guests were George Romero and most of the living cast of Night of the Living Dead and some folks from Dawn of the Dead were there - and so was Tom Savini. I hadn't seen NOLD or Dawn yet - but I had seen all of the Friday the 13th films and so when I saw Savini's booth with some recognizable props - I was entranced. Maybe it was my enthusiasm for the gore effects or maybe he saw it as a humorous opportunity to corrupt an impressionable youth but Savini was more than willing to show me his work - including a few clips from Maniac on a tiny T.V./VHS combo setup. Without any context, the scalping scene was just "oh, look - that's how they made something gory! Cool!"

A couple of years later when I finally saw Maniac for real - that scene really messed me up. The intensity of the strangulation, Spinell's moment of horror and remorse for the murder, and then the escalation to this slow methodical bloody scalping of the woman's corpse. Horror movies rarely affect my dreams - but that sequence would wake me up in the middle of the night with a full flop sweat for several months. It's just such a raw brutal scene that's difficult even today to watch without wincing a little.

I am a fan of Maniac - I love the gritty 16mm photography and the dirty slimy nature of the film - but it's not one I can watch all that often. I'm glad to have it in my collection, but as I try to find a movie to watch on a dark stormy night, it's not one I say to myself "Yeah, I want to watch Maniac!" I have more fun with it now as a grown-ass-man but when I was just a teenager stretching the limits of his parent's willingness to let him watch unedited horror movies unsupervised - the idea of watching it conjures up those first anxious memories.

William Lustig brings a steady director's hand to keep the urgency front and center and always in your face. Its most effective tool of unleashing a disturbing piece of horror is its willingness to never look away. Through some smart editing and wise camera usage, graphic gore sequences feel like they can last an eternity. Even away from the gore, you get a sequence such as where Frank stalks the woman into the subway bathroom - it takes forever to get to where it's going but it's so smartly paced the suspense builds and builds to a grotesque crescendo. While Savini's exceptional gore effects are a major highlight and draw for genre enthusiasts, I will contend the reason it's all so successful because Lustig smartly builds each sequence so competently there's never a rush to a payoff. I like a horror movie that knows when to hold back and then let loose.

Following on the heels of the already fantastic 3-Disc Blu-ray release, Blue Underground unleashes Manic to 4K in a two-disc 4K Ultra HD Blu-ray + Blu-ray Bonus disc release. The 1080p presentation is not available with this set. Both discs are housed in a standard sturdy black UHD 2-disc case with identical slipcover artwork. The disc loads to an animated main menu with traditional navigation options.

Given that the film was shot on 16mm, I am damned impressed with the results of this 1.85:1 2160p transfer with Dolby Vision HDR. As Maniac isn't one I'm often to pull off my shelf - I only have the 2010 set as a reference point. I understand the 2018 3-disc set is fantastic, but I didn't feel the need to upgrade since the film always has been a slimy gritty joy. I'm pleased to see that even a fresh restoration presented in native 4K with HDR can completely clean the grime away! I don't mean to say that this film looks stained or in rough shape, but the natural film style always looked "sweaty" for a lack of a better term and that feeling still resonates. Spinell's intense face is on full display to make each moment of the movie that much more uncomfortable. The slime of late 70s early 80s New York City is completely unvarnished and looks amazing. When Frank is roaming the streets - the trashy of the city can't be missed. The clothing of the era, the impressive production design work that went into Frank's menagerie of mannequins is fully appreciable in ways I didn't get to fully experience with the 2012 release.

With Dolby Vision HDR employed, the film maintains a gritty film-like grain structure with a richly expanded color pallet and some nicely inky black levels. Obvious film-stock limitations persist, but everything looks organic without blowing anything out or crushing the blacks. Blood soaks up a nice crimson color and Frank's apartment offers some extra pop as well. Image depth is also greatly enhanced - that subway sequence looks amazing. All in all, this is a damned good looking presentation proving that low budget material should be presented in the best way possible.

Maniac is given a new Atmos mix and again - this is an area where I was a little perplexed at what could be added to the show. The DTS-HD MA 7.1 mix of the 2010 release was decent enough but I felt it was a little unnecessary. Given the option I would roll with the Dolby Digital 5.1 track. Now with Atmos I feel like the soundscape has a natural presence giving object placement more purpose than the 7.1 track. Busy street scenes or when Frank is at the restaurant with Anna have a natural presence with the overheads offering nice spacial dynamics. Overheads work to offer some nice atmospheric effects or again in that subway give an appreciable echoing quality to the mix.

Also included here is a new DTS-HD MA 2.0 track which I greatly appreciate as it sounds more aligned with the film's original theatrical presentation and older home video releases. As a stereo track it condenses the soundscape into a front/center presentation and in a lot of ways I feel adds some more intensity to the show. The only thing I really miss of the Atmos track is the extra spacing for open street scenes that kept the mix from feeling too stuffed. But that really is only a small quibble as this is a uniformly excellent track. Really it's a dealer's choice for which mix you go with.

No one can accuse Blue Underground of ever being lazy when it comes to assembling bonus features for their releases! This is an exhaustive collection of extra features that will keep you busy for hours upon hours. The vintage audio commentary tracks are both excellent giving terrific amounts of information about the production - especially with the makeup effects and how they managed to execute certain sequences. The real treat that is endlessly amusing to me are all of the news reports - it's kinda fun to see people from 40 years ago getting so worked up about a movie, and one they probably didn't see themselves.

Maniac isn't an easy movie. It deceptively starts with a rather goofy pair of "shock" kills complete with cornball horror score to trick you into believing the film is just going to be another slasher. It's not that simple. Writer, Producer, Star Joe Spinell brings Frank to life with an urgent intensity that in the hands of a lesser actor would have just been comical. There is some humor to lighten the load here and there - but it's pretty sparse. This is a visceral movie that sticks with you long after it's over.

Blue Underground upgrades Maniac to 4K Ultra HD Blu-ray with a terrific transfer in Dolby Vision HDR that adds incredible detail to the image - but doesn't lose the grungy 16mm texture. On top of that, the show gets a new Dolby Atmos audio track that works well at creating a spacious soundscape while an excellent DTS-HD MA 2.0 stereo mix is also available for those looking for something more organic to the film's original theatrical release. If excellent A/V wasn't enough - you have hours upon hours of exceptional bonus features to pick through. Highly Recommended.